As we head into Week 13, it’s time again for our weekly look at the fantasy football players on the rise or fall in the weekly rankings.

Thanksgiving has come and gone and that means it’s getting close to playoff time in fantasy football. As each week passes, we have new information that is presented to us and it requires careful consideration. 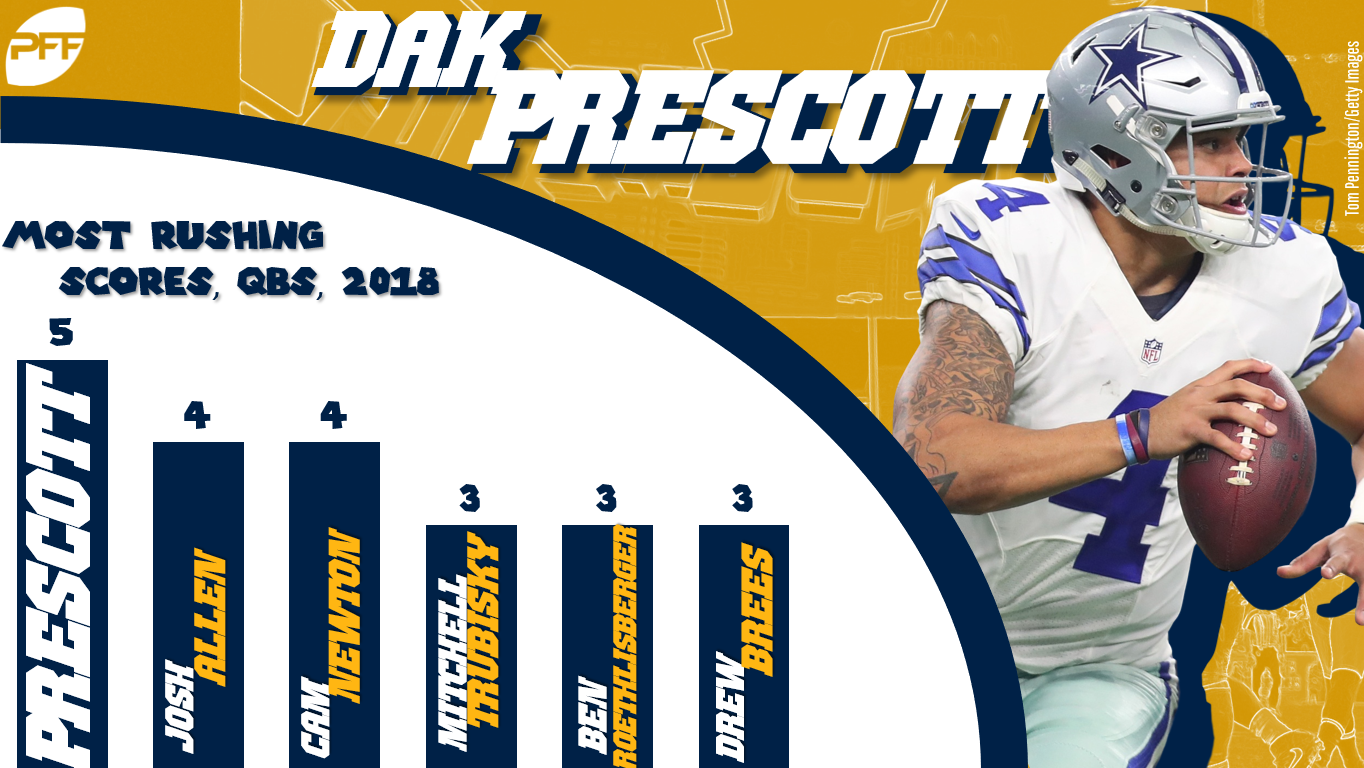 Cousins turned in one of his best performances of the season as he passed for 342 yards and three scores against the Packers. He averaged 9.0 yards per pass attempt while boasting a solid 85.7% adjusted completion percentage in the win. … For the fourth time in his last six games, Prescott delivered top-10 fantasy numbers versus the Redskins as he threw for a season-high 289 yards and two scores. He’s also now rushed for a TD for the fifth time in six outings. … Mayfield delivered 258 yards and four touchdowns on 19-of-26 passing. The rookie now has thrown multiple TDs in five straight games; including seven over his last two. … The Jaguars fired offensive coordinator Nathaniel Hackett Monday after a second straight loss and promptly named Kessler their starting quarterback. He should hold some short-term value in two-quarterback leagues and deeper formats down the stretch.

Cleveland got up big early on the Bengals, which led to a career-high 28 carries for Chubb. The rookie delivered with 128 total yards and a pair of touchdowns. He has now made five trips to the end zone over his last three games. … Michel gave his owners a scare when he was helped off the field during his Week 12 meeting with the Jets, but he returned and finished a with a career-best 133 rushing yards and a touchdown on 21 carries. He should be locked in as a RB2 down the stretch. … Ekeler should have a viable role down the stretch in the Chargers’ offense with Melvin Gordon sustaining a MCL injury. He turned in a season-best 26.3 fantasy points in the win over the Cardinals. … The Eagles have made it clear that Adams is their lead dog and the undrafted rookie delivered against the Giants. He saw 22 carries and finished with 84 yards and a TD. It could have been an even bigger day too as he had a 52-yard TD run called back due to penalty on the Eagles’ second play from scrimmage.

Cooper single-handedly carried fantasy owners to a win with his Thanksgiving Day blowup against the Redskins. He finished with eight catches for 180 yards and two touchdowns. With three of the friendliest pass defenses (NO, PHI, and TB) still ahead in the next four weeks expect him to continue to produce. … There have been three 97-yard TD catches in the history of the NFL and Smith-Schuster has two of them. He was targeted 17 times and now has been targeted 27 times over the past two weeks. His 13/189/1 stat line in Week 12 put him as the PPR WR4 on the season. … With Devin Funchess sidelined, Moore continued to produce for the Panthers. The rookie eclipsed 90 yards receiving for the third straight week and appears poised to take another step forward with one of the easiest schedules ahead for a WR.

With Jack Doyle (kidney) placed on IR on Monday, Ebron elevates back into a more defined role in the Colts’ passing attack. He’s scored 11 times in 11 games and with an increase in snaps and targets ahead look for him to continue to produce at a high level. … Reed has benefited from Colt McCoy at quarterback over their last game and half. He finished with a season-high 75 yards and has now been targeted 19 times over his last two games after averaging 5.9 targets per game in his first nine contests. … With O.J. Howard out for the season and Jameis Winston back at quarterback, Brate’s stock is on the rise. He scored for the first time since Week 6 in the team’s Week 12 win over the 49ers. 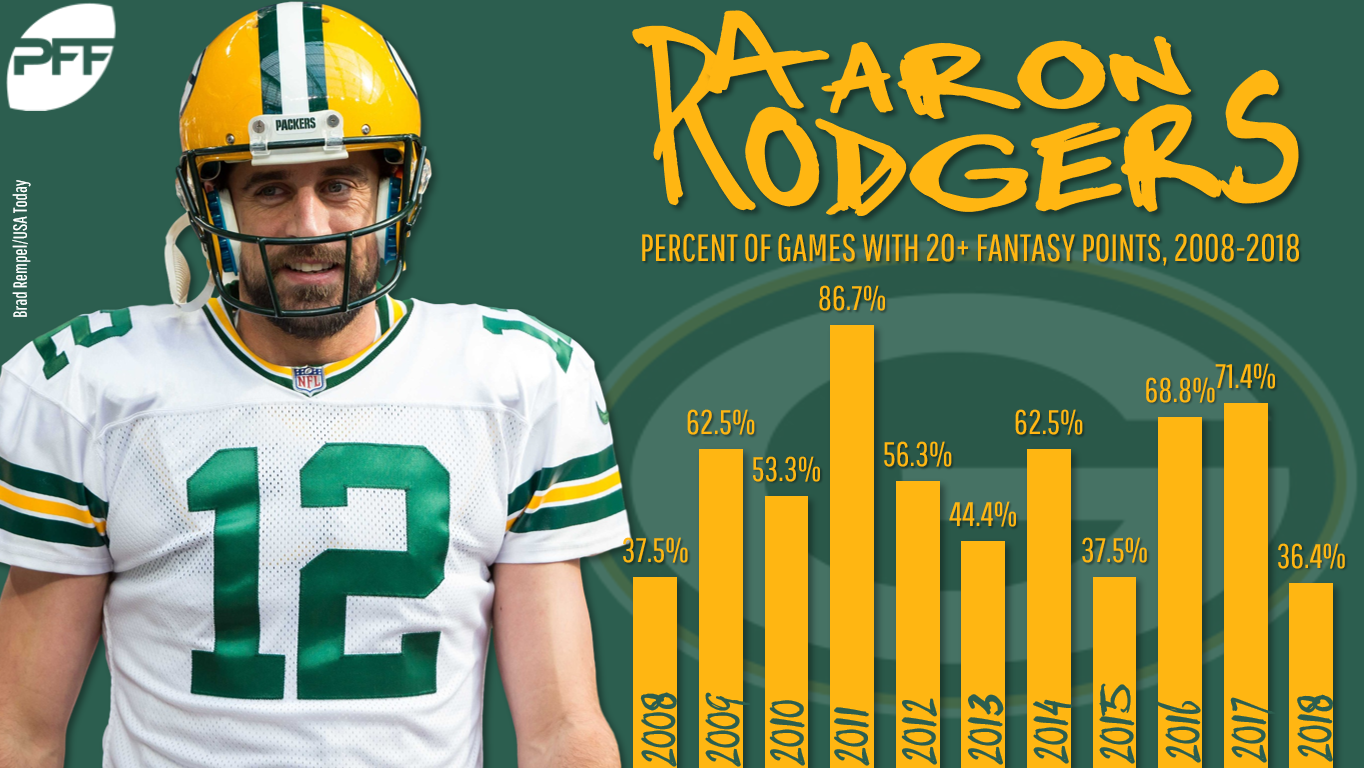 The Vikings proved to be a tough matchup for Rodgers on the road as he delivered his worst fantasy output of the season in Sunday night’s loss. He failed to hit 200 yards passing for the second time in three outings and managed just one passing TD for the fourth time in 11 games this year. … Wentz clearly is showing some lingering effects of the ACL injury. He followed up his disaster of a start in New Orleans with a mediocre output in Week 12, finishing with just 0.43 fantasy points per dropback and a meager 5.9-yard average depth of target. … The Mullens experiment could be ending the very near future for the 49ers. After his breakout game in Week 9 vs. the Raiders, he was pretty pedestrian against one of the league’s worst defenses as he passed for just 221 yards, one TD, and two picks in a loss at Tampa Bay.

Conner scored double-digit PPR points for the 10th time in 11 outings at Denver, but he had just 53 yards rushing on 13 carries in the loss and has now been held to 65 rushing yards or fewer in three straight games with only one touchdown in that span.  …Game flow continues to dictate Peterson’s fantasy value and it hurt him in Week 12’s loss at Dallas. The wear and tear of the season is also starting to take a toll on the 33-year-old as he’s totaled 171 yards on 56 carries (3.2 YPC) over his last four outings and is dealing with a nagging shoulder issue. … A week after it appeared he was primed to start getting a larger workload out of the Oakland backfield, Richard was targeted just three times and finished with just one carry against the Ravens. He’ll continue to serve as a flex consideration in PPR leagues, but his fantasy ceiling remains low.

Those hoping for Gordon to come out of the bye week and have a bigger role in the Patriots’ offense were left disappointed. He caught all five of his targets for 70 yards. Over his last six contests he’s topped 100 yards twice, but only scored one touchdown during that stretch and has yet to catch more than five balls in a game all season. … Landry’s slump continued on Sunday despite the Browns turning in one of their best offensive performances of the season. He finished with only three catches for 30 yards. He has now failed to break 50 yards or score in four straight games. … After a bit of a breakout in Week 10, Robinson turned in a second straight dud as the Bears played without their starting quarterback at Detroit. Since Week 3 he has three double-digit fantasy efforts and four games where he scored eight or fewer PPR points. … Valdes-Scantling has disappeared in the Packers’ passing attack in recent weeks and that trend continued in the team’s loss at Minnesota as he finished with just a single catch for the second straight game. 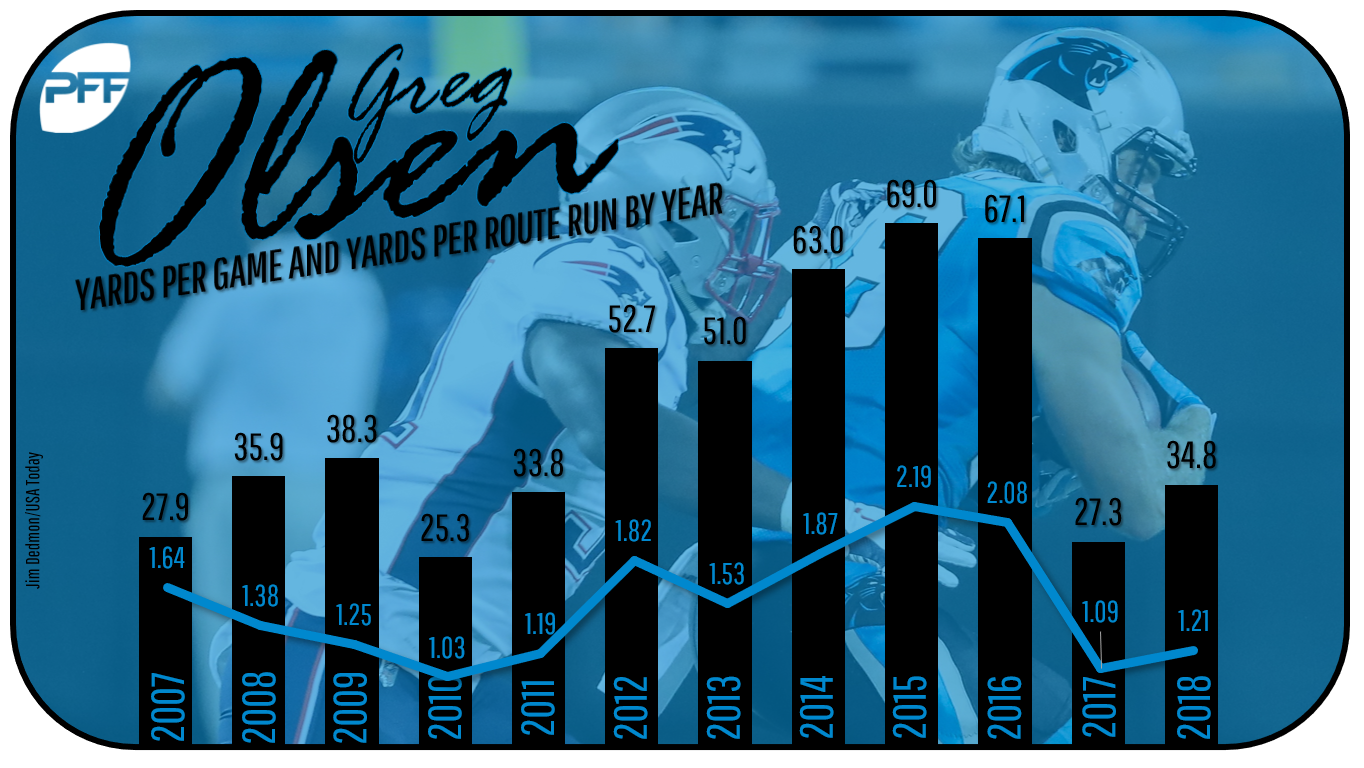 Olsen had his worst game of the year in Week 12, totaling 11 yards on two catches against the Seahawks. He’s only been targeted more than four times once in 2018 and is averaging 34.8 yards per game on the season. … Burton didn’t give his owners much to be thankful for with his Turkey Day dud. He only managed to get 28 yards on four catches and had a costly fumble. Burton has failed to break 40 yards in five straight contests and made just one trip into the end zone during that span. … Ben Roethlisberger has thrown 103 times for 776 yards over the past two weeks, yet McDonald has been targeted just 11 times for six catches and 54 yards during that span.