Fantasy stats to know from Week 1

Each week in this space, we’ll be taking a look back at Sunday’s games to find five of the most important stats for fantasy owners heading into the following week. With 14 of 16 games from Week 1 in the books, here are the five stats you need to know: 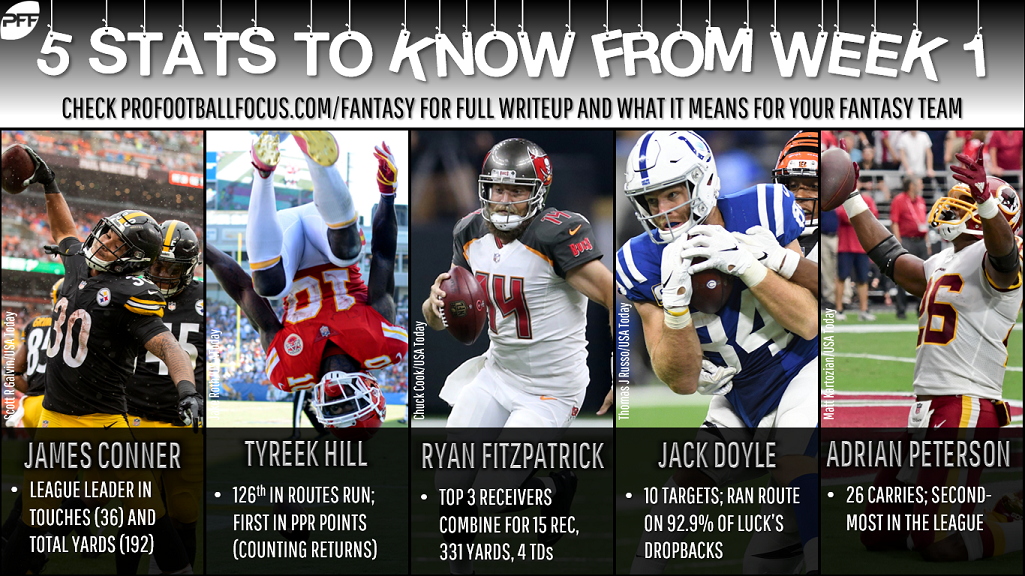 With Le’Veon Bell in the midst of a holdout, Conner has cemented himself as a top-five fantasy running back whenver Bell is inactive. Conner saw terrific volume in Week 1, playing on 100 percent of the team’s snaps and totaling 31 carries with five receptions. For perspective, there were only five instances of a player totaling at least 36 touches in a single game last year, and two of those were from Bell. Conner was also terrific on those touches, scoring 35 fantasy points, or second-most among running backs. Week 1 was a tremendous follow-up to a great preseason from Conner, when he ranked as our highest-graded running back of 133 qualifying.

Bell’s absence doesn’t just create fantasy value for Conner, but also for Antonio Brown. Since 2015, Brown has averaged 13.9 targets per game and 28.1 fantasy points per game when Bell has been inactive (14 such games) — as opposed to only 10.4 and 19.6, respectively, when he's been on the field.

Hill saw eight targets and caught seven of them for 169 yards and two touchdowns, while also scoring on a 91-yard punt return. All offseason fantasy analysts have been projecting a regression to the mean for Hill. “Hill can’t possibly continue to be as productive as he’s been without a massive increase in targets, right?” Well, maybe. Or maybe Hill is just one of the best wide receivers in the NFL.

Indeed, I do think that’s the case. Hill has ranked top-six in yards per route run and top-15 in WR rating in each of his two seasons in the NFL. In terms of Actual Opportunity, Hill averages 3.6 fantasy points per game above his expectation, which leads the league over the past two years.

In addition to consistently absurd efficiency, Hill is also seeing better volume with Patrick Mahomes under center. Last year, Hill averaged one target every 4.9 routes. This year (including preseason), Mahomes has locked onto Hill, targeting him once every 3.0 routes. In total, Hill has comprised 50 percent of Mahomes' touchdowns and a whopping 56 percent of his passing yards over this stretch.

What does this mean? Well, a few things.

4. Tight end usage implies Jack Doyle is still the TE1 in Indianapolis and Jordan Reed’s fantasy stock is on the rise.

Reed was a major target of mine this offseason, and those shares are looking good today. Despite coming into the week on a snap count, Reed impressed. He saw five targets, catching four for 48 yards and a score. In Week 1, Reed played on only 60 percent of the team's dropbacks. When healthy (in 2016), that number was typically around 83 percent. Expect these numbers to rise as he gets healthier and the season goes on.

5. Week 1 is just 6.7 percent of your fantasy season. Don’t overreact to a one-game sample. Don’t fall victim to primacy bias. Do take advantage of your myopic league-mates.

With that recommendation and caveat in mind, something I do pay very special attention to in Week 1 is running back usage. Here are my top usage-driven takeaways for running backs: