MIAMI GARDENS, FL - OCTOBER 23: Ryan Tannehill #17 of the Miami Dolphins warms up during a game against the Buffalo Bills on October 23, 2016 in Miami Gardens, Florida. (Photo by Mike Ehrmann/Getty Images)

(This is our Fantasy Lookback, a review of the top fantasy football seasons at each position for each franchise over the last decade of NFL action. We’ll look at some big names that are still going and some who have been gone long enough that they’re in the Hall of Fame. Today: The Miami Dolphins)

The Dolphins haven’t actually been bad since 2007. That was a 1-15 season, and in the 11 years since, they’ve never won fewer than six games, including a 2008 division title. The problem is, in part because they are stuck in the same division as the Patriots and in part because, well, they aren’t very good either, they’ve only had one year since that division title with more than eight wins. That is 10 years and nine of them have had a record of 6-10, 7-9, or 8-8.

When a team is that mediocre for that long, it’s hard to find a great hook about them. Also hard? Guessing who has the best fantasy seasons at each position for that team. Go on, guess. Take a minute and see how many of the four names you can come up with. It’s an eclectic mix.

Let’s take a look at the best Dolphins fantasy seasons of the last decade. 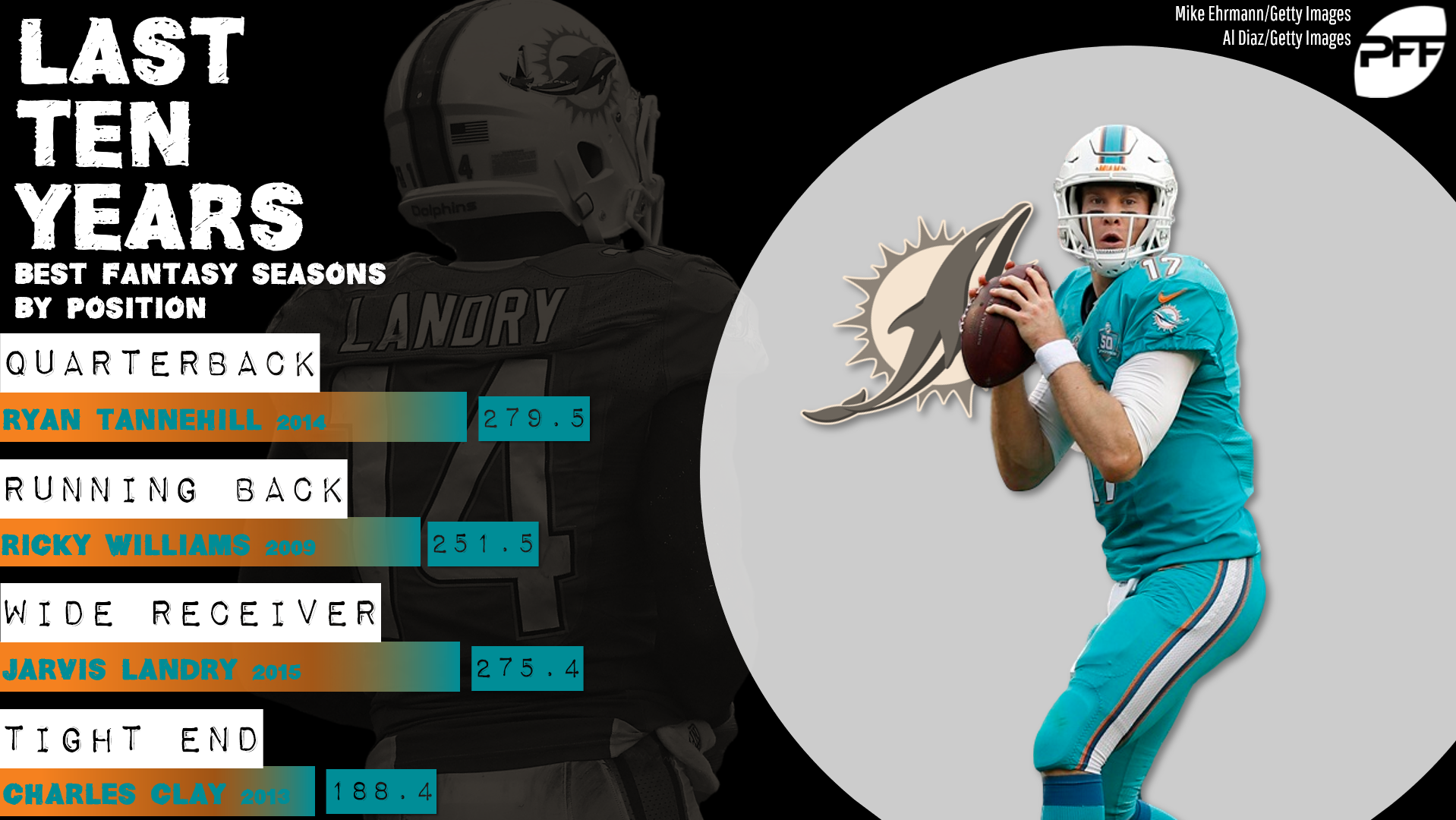 Tannehill actually owns each of the top five QB fantasy seasons for the Dolphins over the last decade, as much as testament to his own performance as it is to the fact that the Dolphins have had the most aggressively mediocre quarterback situation in the league since Dan Marino was starring in movies alongside Jim Carrey. Tannehill was one of the league’s worst starting quarterbacks last year, but from 2013 to 2015, he totaled 75 passing touchdowns and 12,166 passing yards, both very respectable numbers for an extended stretch.

The Dolphins of recent vintage have embraced the backfield committee more than any other team. Lamar Miller couldn’t put up huge numbers because of Daniel Thomas. Arian Foster had to deal with Jay Ajayi, then Ajayi had to deal with Kenyan Drake, then Drake had to deal with Frank Gore. As such, we have to go all the way back to Williams’ 2009 to find a Dolphins RB season with more than 235 PPR points. Even if Gore isn’t back in 2019, the Dolphins will have Drake and Kalen Ballage, so we might have another complicated position to sort through.

Landry actually had a higher fantasy finish than this, finishing as WR4 in 2017, but his higher standing was due more to the receivers around him; he had five more points in 2015. He’s five years into his career, has caught at least 80 ball every year, has had at least 130 targets each of the last four years, and has never missed a game. Landry isn’t in the conversation for the No. 1 receiver in the game, and probably isn’t even in the conversation for the second tier, but there aren’t many more reliable fantasy weapons at the position.

There’s probably no player more unlikely to appear on this list around the league twice than Clay, who has the best tight end season for both the Bills and Dolphins in the last decade. And it’s a comfortable first place in the case of the Dolphins, as the only tight end within even 70 points of Clay’s 2013 is … Clay in 2014. Otherwise, it’s a bunch of Anthony Fasano types. The Dolphins go through tight ends like Murphy Brown goes through assistants. (Does that joke still work since the show’s revival? Is that a thing? My jokes are stuck in 1993.)