With another week behind us, and some more fresh stats to analyze, I’m here to help you with your toughest fantasy football start/sit decisions of the week for Week 12. 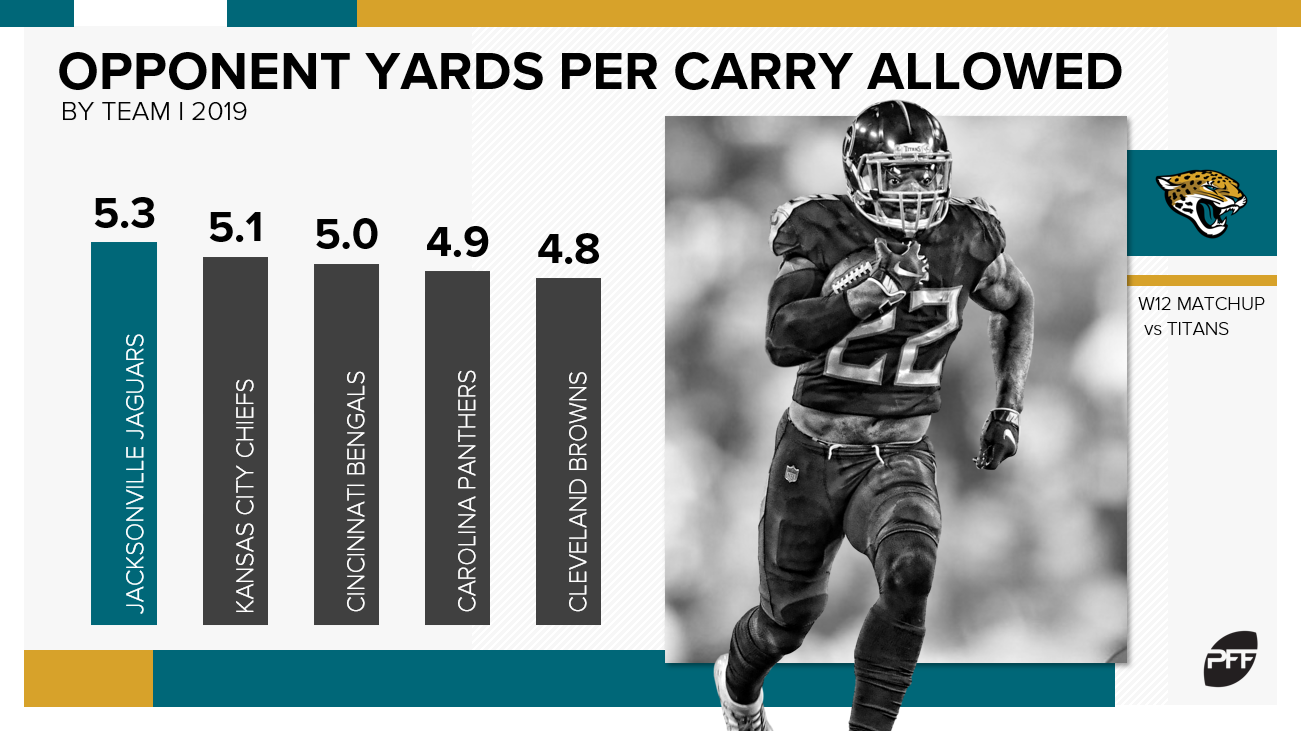 Jacksonville’s defense ranks dead-last in rushing yards allowed per carry (5.3), well above the league average rate (4.31). Since Week 5, they’ve allowed 6.21 yards per carry on the ground, while surrendering 100-yard games to every runner they’ve faced who has exceeded 12 carries against them (Jonathan Williams, Marlon Mack, Carlos Hyde, Christian McCaffrey). In other words, expect a big game this week from Henry, who just totaled 188 rushing yards and two touchdowns against the defense that ranks second-worst in yards per carry allowed (5.05).

In spite of Kareem Hunt’s return from suspension, Chubb is seeing his best volume of the season – he’s just a little more gamescript-sensitive week-to-week. Luckily, that won’t matter too much this week, as Cleveland has ideal gamescript, favored by 10.5 points, and against a Miami defense that is giving up the most rushing yards per game (128.7) to opposing running backs. Cleveland is also projected to score 27.25 points this week, which is 8.1 points above their per-game average this season. That’s especially relevant to Chubb, who ranks sixth among all players in expected touchdown percentage (31%).

Ryan has been held under 200 yards in two of his last three games, but he’s also exceeded 300 yards in seven of nine games this year. Look for Ryan to extend that number this week, at home against a Tampa Bay defense that is giving up the second-most fantasy points per game to opposing quarterbacks.

Beckham totals just 123.0 fantasy points in his 10 career games with the Browns. For perspective, that’s 46.6 fantasy points less than his worst 10-game stretch with the Giants. Beckham has no doubt struggled this year, and partly due to a league-worst strength of schedule, but volume has remained strong and Week 12 looks like the perfect get-right matchup. Miami has been getting beaten up by opposing WR1s since their Week 5 bye, surrendering: 26.0 fantasy points to Terry McLaurin, 21.3 to JuJu Smith-Schuster, 22.3 to Jamison Crowder, and 19.3 and 34.7 to John Brown.

Sutton ranks seventh in PFF grade and fourth in receiving yardage market share (35%). He’s no doubt been phenomenal this season, but, tethered to a Brandon Allen-led offense and in a bottom-tier matchup, he’s better left on your bench. Expect Sutton to draw shadow coverage from Tre’Davious White who ranks top-25 in both PFF grade and fantasy points allowed per snap in coverage.

Like Sutton, McLaurin has been terrific in his rookie season, ranking 10th in PFF grade. Again, like Sutton, he’s also saddled with an inexperienced quarterback and a bottom-tier matchup. After averaging 19.4 fantasy points per game through his first five games, he’s averaged just 7.0 fantasy points per game since. That’s probably about what we should expect this week up against Darius Slay’s shadow coverage. Just last week Slay held Amari Cooper to only 6.8 fantasy points.

Keeping up with our theme of the week – good wide receivers with questionable quarterback play and difficult matchups – Boyd too is better left on your bench (in shallow leagues), and for similar reasons. Since Week 6, Boyd averages just 8.1 fantasy points per game. Further, Pittsburgh has been stout against top-tier slot wide receivers, holding Boyd, Keenan Allen, and Cooper Kupp to just 4.0 fantasy points per game.

Over the last two weeks, Mixon averages 22.5 carries, 3.0 targets, and 127.0 yards per game. That’s pretty good, and especially considering he averaged just 10.0 fantasy points per game through his first eight games. Even so, he draws a worst possible matchup this week – no running back has reached even 14.0 fantasy points against Pittsburgh this year. Mixon is just a low-end RB2 this week.

Moore leads all players in targets since Week 8, and he’s exceeded 15.0 fantasy points in five of his last six games. Although Moore has failed to find the end zone in any of those games, that’s due more to bad luck than volume or efficiency. In other words, expect a positive regression (more fantasy points) to the mean in the next few weeks. This week, up against the Saints, he’s worth starting as a mid-range WR2, or a borderline WR1 if Marshon Lattimore sits out again.

Similar to the three tight ends referenced at the top of this article, if Hilton plays this week, you likely have little choice but to start him. The injury makes him risky, but at the very least everything else seems to check out. Indianapolis’ other receivers (the few healthy ones at least) have all underwhelmed, but Hilton is averaging 17.8 fantasy points per four quarters, which would rank sixth-best among all wide receivers. Further, the matchup looks solid – Houston is giving up the seventh-most fantasy points per game to outside wide receivers. 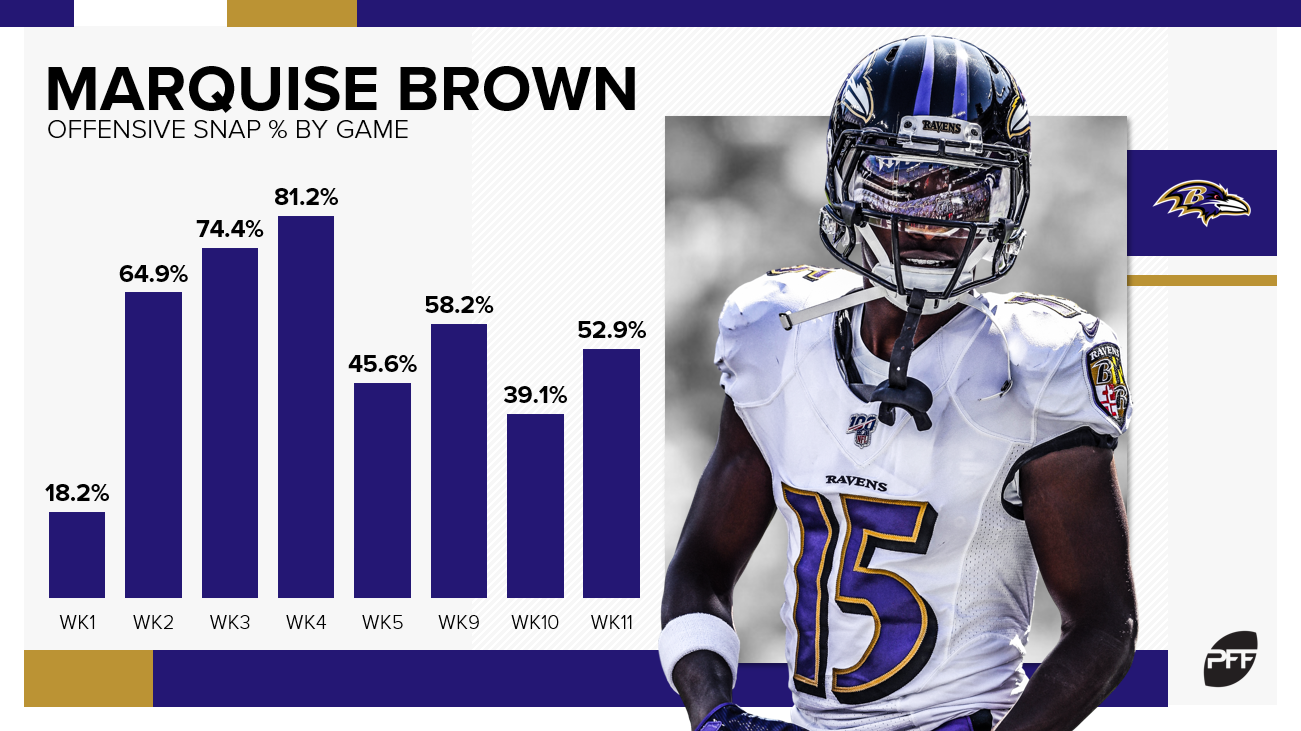 Brown was also off to a hot start earlier in the season, but has played on just 58%, 39%, and 53% of the team’s snaps since returning from injury in Week 9. Over this span he’s failed to eclipse four targets in all three games. In shadow coverage against Jalen Ramsey this week, he needs to be downgraded to a low-end WR3.

For a brief shining moment, Jones looked like he could be an every-week option. However, after last week’s six-touch, 14-yard outing, we were reminded that that was a terrible idea. Jones played on just 30% of the team’s snaps last week and has only exceeded 50% of the team’s snaps just once this year. That won’t be enough to get it done this week.

Since Week 4, Parker ranks 17th among wide receivers in fantasy points, with top-36 finishes in all seven of these games. It only took five seasons, but fresh off consecutive games with double-digit targets, Parker is finally worth a start. In a neutral matchup against the Browns, he should be started as a high-end WR3.

In an absolutely brutal week for tight ends (see earlier), Griffin can be started as a top-10 fantasy tight end. He’s scored 11.0 or more fantasy points in four of his last six games and 24.0 or more in two of his last four. This week, he’ll get a Raiders defense that ranks third-worst in schedule-adjusted fantasy points per game allowed to tight ends.

Hill no doubt disappointed last week, but volume was about what we expected. Since the team lost Devonta Freeman to injury, Hill has seen 37 of the team’s 44 touches out of the backfield (84%), and in just about six quarters of work. Hill has struggled with efficiency and this is a worst possible matchup, but that volume is good enough to still consider Hill as a high-end RB3.

Jonathan Williams was a popular waiver-add this week, but maybe not a smart one – he’s probably still behind Hines and Jordan Wilkins on the depth chart. That means Hines should see an uptick in usage this week. Though double-digit carries is unlikely, he will receive the bulk of the targets out of the backfield, and that should prove to be a valuable role. The spread implies a pass-heavy affair (-4.0), as does the matchup – Houston is giving up the most fantasy points per game to running backs through the air (16.5) but the fifth-fewest to running backs on the ground (9.9). If you need a spot-start from a player off the waiver wire, he’s one I’d consider turning to.