I had to make the upper tiers at the tight end position narrow, because there is a huge caste system near the top of the tight end position this year. The top tier is — probably without any controversy at all — Travis Kelce, Zach Ertz, and George Kittle, in some order. The next tier, again likely without debate, is Howard, Henry, and Evan Engram. Forcing those into other tiers just for the sake of tier consistency with the other pieces didn’t seem worth it. So the debate here is which of the second group are most likely to climb to the first, and I would argue these two have the advantage over Engram and his deteriorating quarterback. We’ve seen what the ceiling of a Chargers tight end is, and it’s immense. Meanwhile, Howard is still part of one of the league’s pass-heaviest offenses, with two primary receiving pieces from last year gone now, and has been a monster on a per-game basis in his career.

Cook finished as fantasy’s TE5 last year in a bad offense with Derek Carr as his quarterback. Now he’s in an excellent offense with Drew Brees as his quarterback. It’s not that simple — the 2018 Saints have more weapons to steal targets than the 2018 Raiders did, you wouldn’t have to press hard to argue that last year was Cook’s career year — but the pieces are there for him to finish as a top-five tight end again. 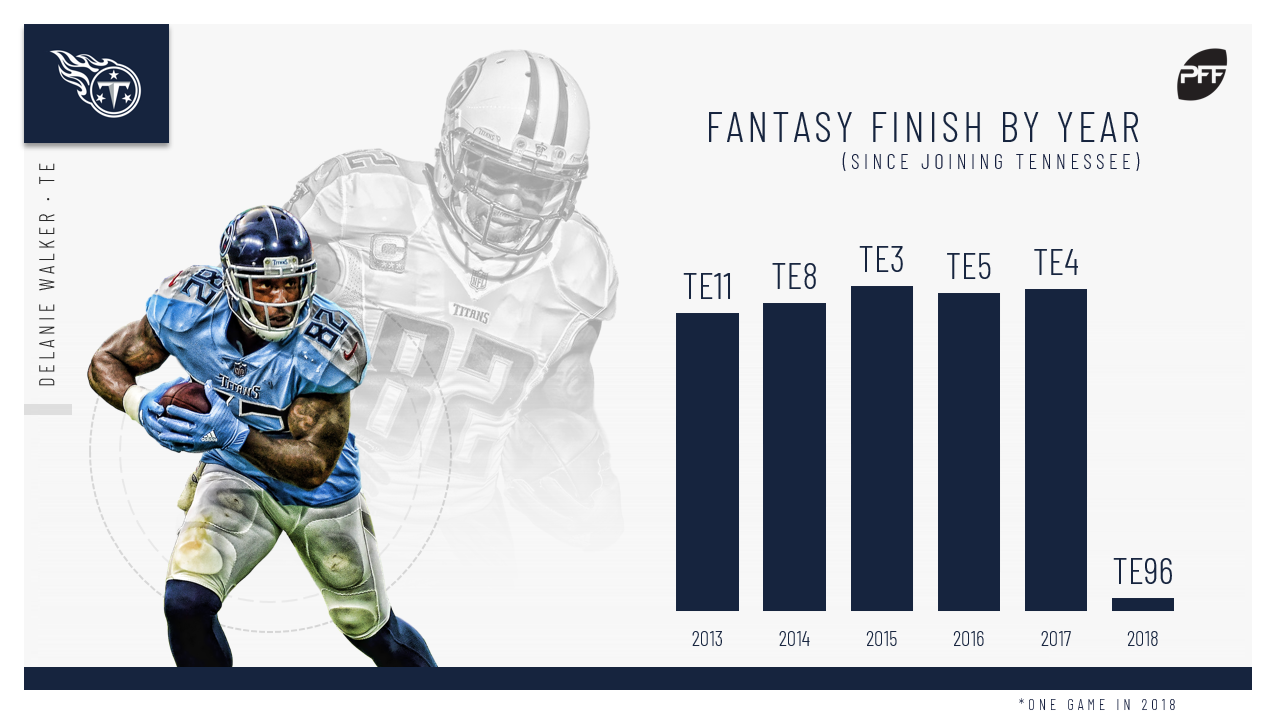 Walker played five years for the Titans before last year’s wildly abbreviated season. In those five years, his average fantasy finish was TE6, including fifth or better in each of 2015-2017. Yes, he’ll be 35 in Week 1, he played one game last year, and it’s a run-heavy offense this year, but he’s certainly a candidate to rise. All he has to do is what he’s already done before.

There isn’t much argument needed about Reed. He’s finished 14th or better in TE fantasy scoring in all three of his six career seasons he’s played 12 or more games, including last year. If he plays, he’s productive. There’s obvious risk with Reed of him not playing, but him jumping a tier wouldn’t be any kind of surprise.

Gesicki’s resume includes a 202-yard, zero-score, 50.7-graded rookie year, but it also includes the No. 2 TE slot in PFF’s big board ahead of the 2018 draft. The track record of rookie tight ends is famously poor. If Gesicki can make strides at all, given the Dolphins’ lack of offensive weapons and the dearth of upside at tight end, he could be an interesting option who is free in drafts. (Worth noting: I wrote this a week ago, before concerns of Gesicki's training camp arose. He still has worlds of potential, but let's call this one a long shot for now.)