After diving a decent amount into the recently released PFF Playbook, I found myself forced to take notes based on the sheer volume of information it possessed. Besides highlighting a ton of valuable stat-driven blurbs, I started sifting through for potential value plays and players that I thought could emerge as breakout candidates.

The term “sleeper” is so hard to define today. Given the constant 24/7 news cycle of the NFL, there are very few fantasy player or tidbits of information that fly under the radar. Sleepers are far and few between.

For those of you that took the summer off from NFL news and are just starting to get back into it, I’ll recap the biggest edges I’ve discovered while going through the PFF Playbook and which players qualify as “sleeper” status with a chance to outperform their current ADP.

In order to do this, I’ve grouped running backs and wide receivers by position “buckets” of top-25, top-50, top-75, and top-100. In other words, I’m classifying a sleeper as a player with the potential to jump from one bucket to the next.

Garcon has a very strong chance of outperforming his current Tier 2 status, being drafted outside the top-25. Prior to injury last year, he was on pace for 134 targets. Over the last 10 years, 130 wideouts have seen at least 134 targets. Just four of those wide receivers have finished lower than WR27. Garcon’s 21.2 percent target market share in his healthy games would’ve finished 19th among all wideouts according to the Playbook. In his five starts with the 49ers last year, Jimmy Garoppolo led all quarterbacks in yards per attempt (8.76) and had the second-highest completion percentage under pressure during that span (62.3 percent). The addition of Garcon will surely help with the latter statistic, given his low average depth of target of 10.1 yards (83rd of 120 qualifying) and reliability as an underneath option for Garoppolo. Our Playbook highlights Garcon currently as a value (ADP of WR32), and it wouldn’t be shocking to see him outperform both rankings on this ascending offense with impending positive touchdown regression.

Despite the Patriots investing a first-round pick in a running back, Burkhead is the player that I’m most actively targeting on the Patriots this year. He looks to have the early lead on the rookie Sony Michel, taking the majority of first-team reps through OTAs and minicamp. He proved last year that he could be a prolific scorer for New England, leading the team in touches inside the 10-yard line (21) while scoring on seven of them (33.3 percent). Securing that role is a pivotal one for fantasy purposes, after New England led the league in percentage of drives that finished with scores last year (49.4 percent). Even more alluring for Burkhead and the Patriots is that they own the second-softest schedule when it comes to fantasy points per touch. Burkhead thrived in this statistic last year, finishing 2017 as our No. 4 producer (1.04 FP/T). A versatile back capable of rushing and receiving, Burkhead could easily vault into the top-25 as a fantasy producer this year even with inevitable regression from last year’s 8.5 percent touchdown rate per touch.

I mentioned Lockett as a player with strong chances of beating his ADP, and am glad to see the Playbook backing me (WR53) over Lockett’s current ADP (WR60). 217 targets are available in this offense, providing a huge opportunity for Lockett if he can capitalize on the No. 2 wideout role. It wouldn’t be surprising at all to see a sizeable portion reallocated in Lockett’s favor and see him finish the year as a top-50 wide receiver. Routinely available in the 12th to 13th rounds, Lockett is the prototypical, high-upside wide receiver you want to target.

Before knee injuries derailed a promising rookie year, Jones looked like he was en route to a promising fantasy season. From Weeks 4-7, Jones was the fantasy RB8 while seeing workhorse-like touches (16.8). Jones will open the year with a two-game suspension but returns to face one of the softest rush defense schedules. Jones bested both teammates Ty Montgomery and Jamaal Williams last year, sporting a healthy 5.5 yards per carry, and possesses an immense ceiling given his playmaking ability in the open field. Propped up by an Aaron Rodgers-led offense, Green Bay should routinely offer scoring opportunities for Jones. Green Bay has ranked fourth, 15th, and second in points per game in Rodgers’ last three healthy seasons. Jones has already seen his ADP drop a full round since his suspension was announced and is now regularly available in the ninth rounds of drafts. He isn’t without risk, but few backs carry top-12 fantasy potential like Jones around his ADP. 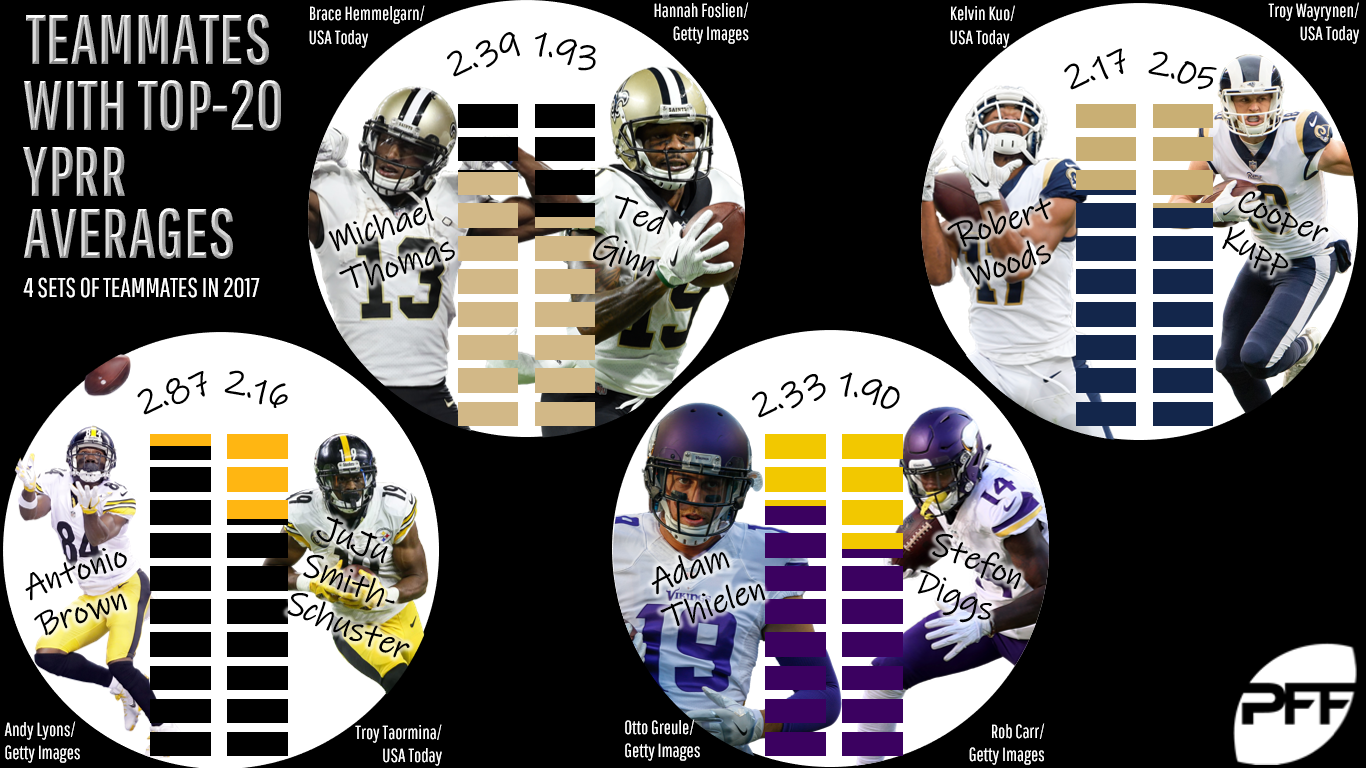 One of the more interesting statistics I found while looking through the Playbook was uncovering that there were four teams that had two wide receivers finish top-20 in yards per route run. The most surprising of the bunch was New Orleans, with both Michael Thomas (2.39) and Ginn (1.94) turning in highly productive seasons. Ginn posted career-highs in receptions (65), receiving yards (974), and catch percentage (75.6 percent) in his first season playing with Drew Brees. His high YPRR was a subsequent result of the Saints opting to target him closer to the line of scrimmage. His 12.6-yard aDOT was much lower than his career average (14.1), allowing him to capitalize on more high-percentage throws and find success. Ginn finished last year as the fantasy WR34. He’s an absolute bargain at current ADP with a rather easy path to climbing up into the next WR tier.

It might be premature to call it a changing of the guard already, but if 31-year-old DeSean Jackson were to miss any time at all, Godwin could be elevated to a weekly flex play right out of the gate. Last year, Godwin ranked 28th in PPR fantasy points per opportunity, 17th in yards per target, and 13th in YPRR. Not a bad debut at all for a rookie who saw just 41.0 percent of his team’s offensive snaps. Reports out of camp regarding Godwin have been glowing with the hype train reaching full speed. Last year the Buccaneers ranked third in pass play percentage (62.32 percent), fourth in passing yards per game (272.9), and eighth in red-zone trips per game (3.3). This ascending offense will look to continue its passing success from last season, hopefully presenting more opportunities for the emerging young star in Godwin. Leave your draft with Godwin as one of your final round draft picks and stash away one of this year’s best sleeper candidates.