Pro Football Focus is here to break down the most efficient fantasy football players leading into Week 9 of the 2018 NFL season. This article breaks down which running backs, wide receivers, and tight ends have the best matchups of the week.

Newton rolls into Week 9 with six straight multi-touchdown games, and there’s a good chance he’ll make it seven in a row against the Buccaneers, who have given up the most fantasy points per dropback (0.64) to opposing quarterbacks. Newton is averaging 0.62 PPDB this year. He’ll shine in Week 9.

Smith will be at home against the Falcons, who have given up the fourth-most fantasy points per dropback to opposing quarterbacks, giving him his best chance yet at a breakout game. Smith has been bad for fantasy over the last month — with fewer than 180 yards in three straight games — but he gets a chance to right the ship in Week 9.

Howard is averaging a poor 3.5 YPC this season, but his total of 112 rushing attempts ranks in the top 10 among running backs. That volume should lead to success against the Bills, who have surrendered the fourth-most fantasy points per touch to opposing backfields. 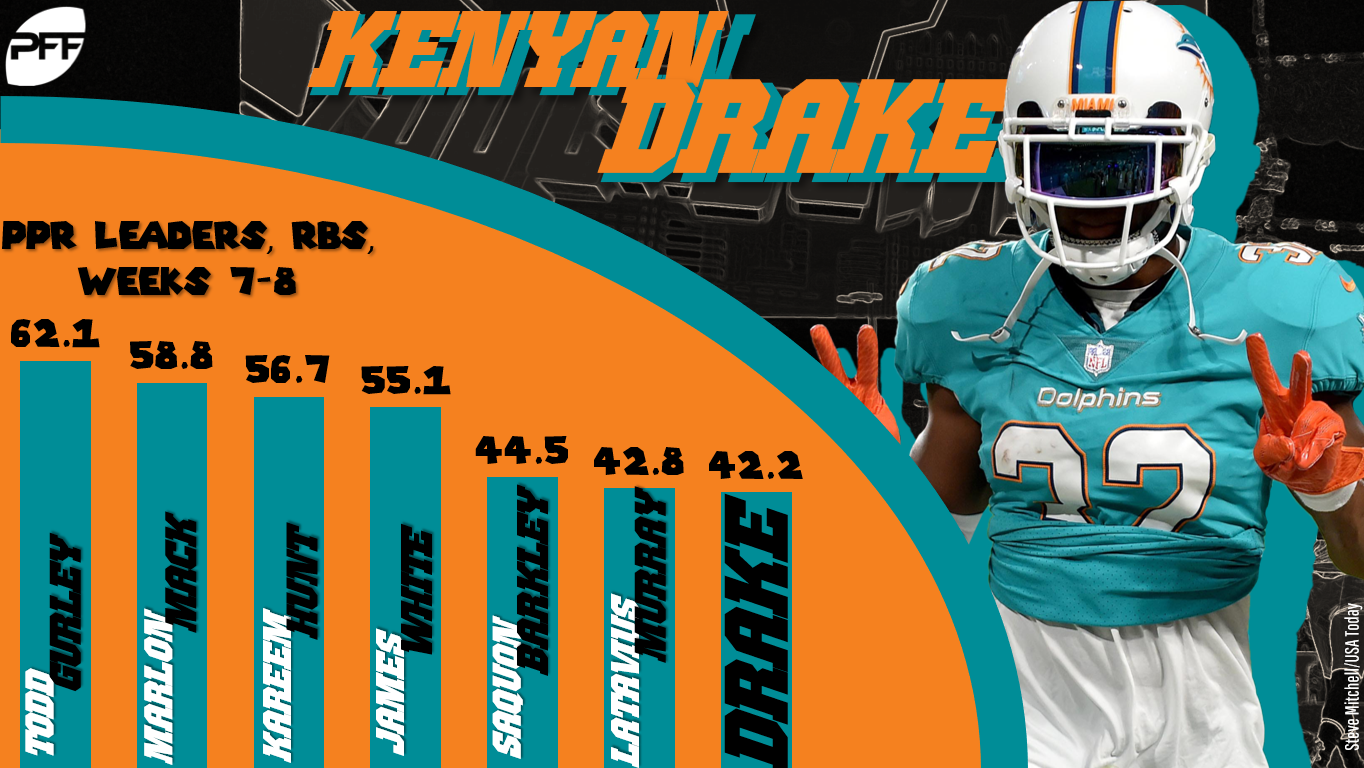 Moore saw an expanded role in Carolina in Week 8, as he led the team in targets (8), receptions (5), and yards (90). He added two carries for 39 yards as well. Moore will keep the momentum going against the Buccaneers secondary; he has the fifth-best individual WR/CB matchup of all receivers this week.

Kupp returned to practice on Wednesday and head coach Sean McVay says there’s a good chance he’ll play, and if he does, look for him to exceed expectations. That’s because he’ll see a lot of P.J. Williams, who has been abused by passing attacks all year. Williams has surrendered 25 catches on 32 targets for 352 yards and 5 touchdowns.

Like his Panthers teammates, Olsen gets a plum draw against the Buccaneers porous pass defense, which has been generous to tight ends as well. Tampa Bay has given up the second-most fantasy points to opposing tight ends on the year. Olsen has been playing virtually all of Carolina’s snaps since returning from injury, and he caught all four balls thrown his way for 56 yards and a score last week. Look for him to at a minimum match those numbers this week.

You shouldn’t be benching Mahomes, but expectations should be tempered this week, as the matchup against the Browns is tougher than people realize: Cleveland has given up the fewest fantasy points per dropback to opposing quarterbacks this year.

Roethlisberger is going on the road against a divisional rival (Baltimore) that has given up the second-fewest fantasy points per dropback to enemy quarterbacks this year. If you can afford it, he’s benchable in Week 9. 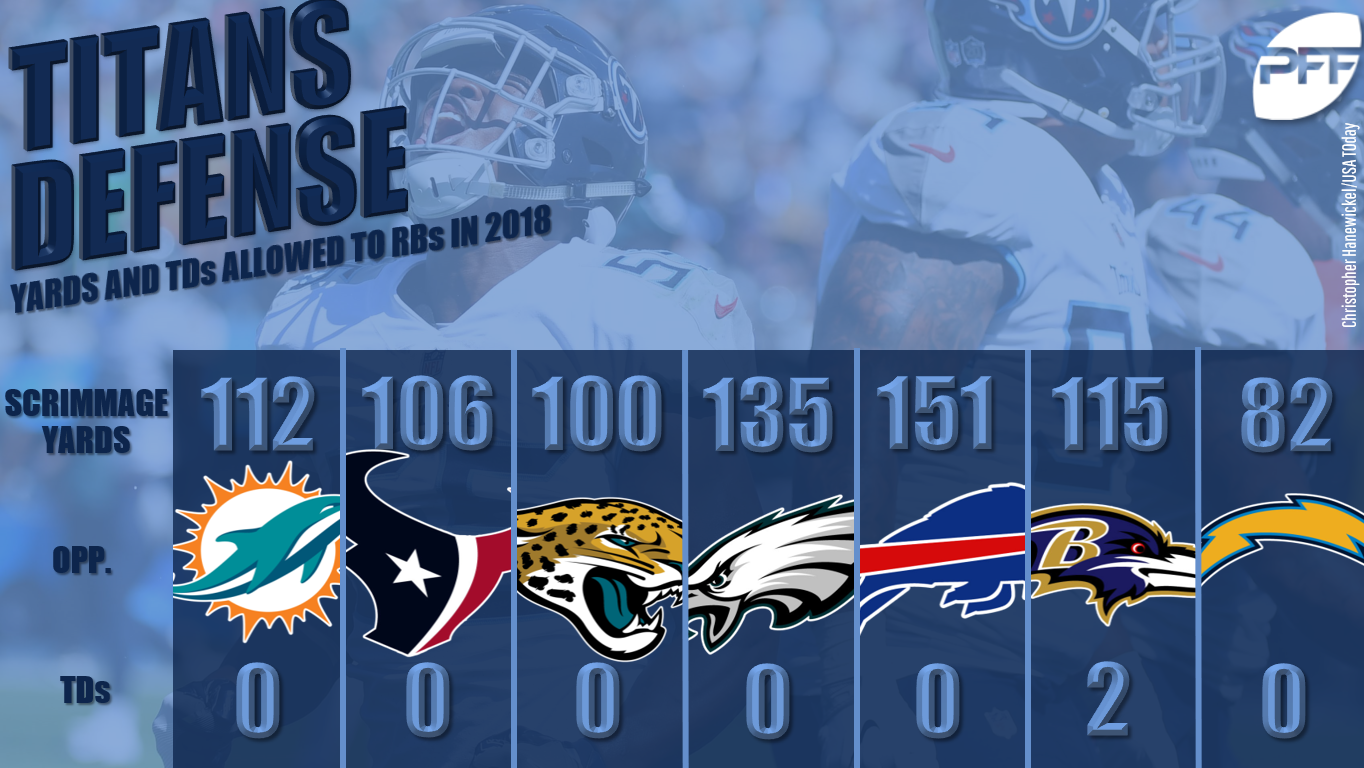 Elliott has a tough draw against the Tennessee Titans, who have given up the fewest fantasy points per touch to opposing running backs this year. Running backs have been held scoreless against Tennessee in six of seven games this year.

McCoy is seeing great volume, but the scoring opportunities simply aren’t there with Buffalo’s anemic offense. And now he gets his toughest matchup to date: A Week 9 visit from Chicago, which hasn’t given up a rushing touchdown all year and has kept opposing running backs to just 3.5 YPC on the year.

Adams will draw shadow coverage from Stephon Gilmore, who has been playing lights-out shutdown football for the past five weeks. In that span, Gilmore has held his man to 1.6 receptions and 19.2 yards per game.

The Chiefs have held opposing wideouts to the fewest fantasy points per target so far this season, notably giving up just three touchdowns to opposing receivers since Week 3.

The Redskins, Hooper’s Week 9 opponent, have kept opposing tight ends in check this season. Washington has given up the fourth-fewest fantasy points per target to tight ends while holding them to 292 yards on the year — fifth-fewest in the NFL.

Burton and the Bears square off against the Bills, who, despite their offensive woes, boast a strong defense. Buffalo has given up the third-fewest fantasy points per target to opposing tight ends this year.