Who are the biggest fantasy football sleepers and busts for Week 13 of the 2018 NFL season? We use advanced matchup analysis to bring you a list of players who will overperform (sleepers) or underperform (busts) their typical production.

Below are some of the top sleepers and busts for Week 13.

Jackson was listed as a “sleeper” last week thanks to his great passing matchup (in addition to his legs), and the same rings true in Week 13. I won’t pound the table for Jackson every week, but he needs to be highlighted as a strong start yet again this week with his matchup against the Falcons, who have given up the fifth-most fantasy points per dropback to opposing quarterbacks this season.

After a string of tough matchups — the Cardinals, Chiefs, Texans, Chargers, and Steelers all rank in the top-half of the league in terms of fantasy PPDB ceded to quarterbacks — Keenum gets a plus Week 13 draw against Bengals, who have given up the third-most fantasy PPDB to quarterbacks. 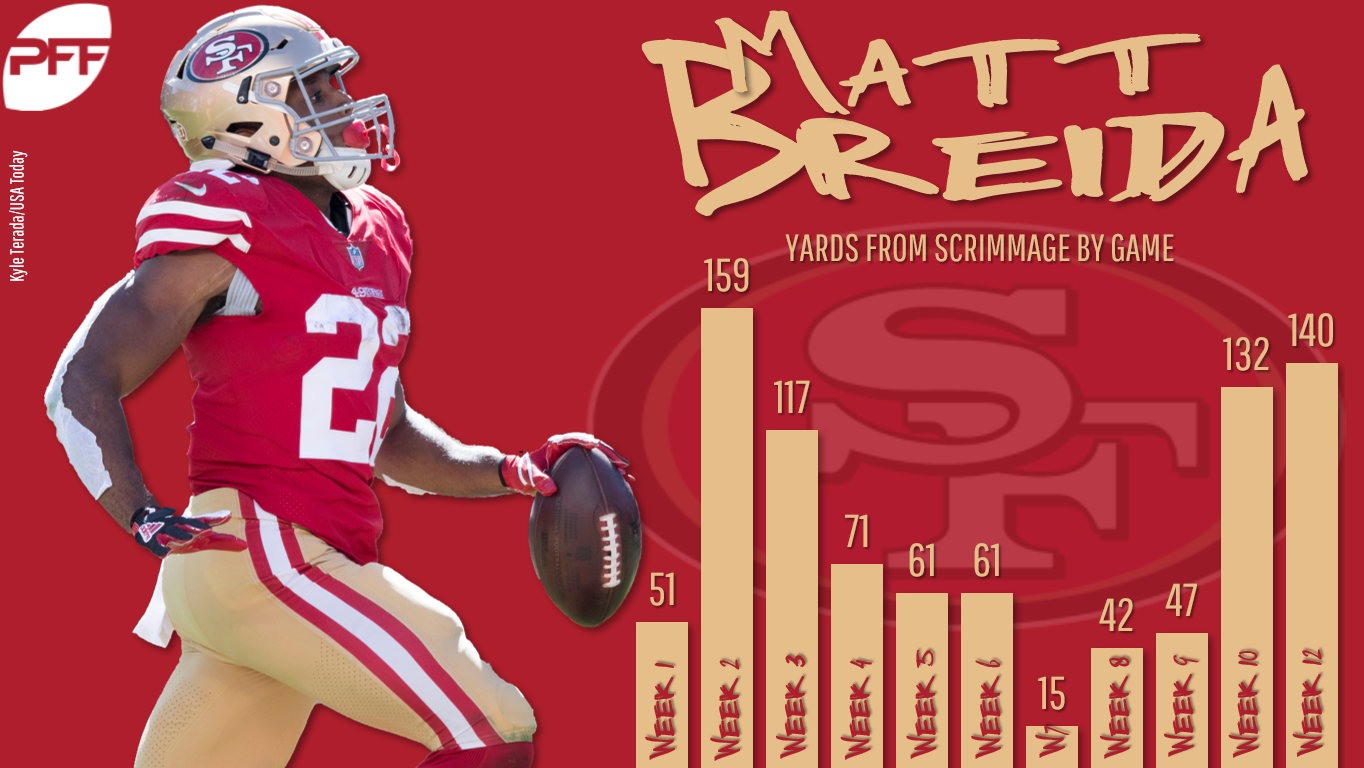 Breida, typically an up-and-down character, has been riding a high, with two straight 100-yard games to his name. He has a better-than-you’d-think Week 13 matchup against the Seahawks, who have given up the fifth-most fantasy points per touch this season, including four straight games with a rushing touchdown given up and 120-plus rushing yards surrendered in three of their last four.

The Raiders are 15-point underdogs (!) despite playing at home because they’re up against the ruthless Kansas City Chiefs. While a bloodbath is on the horizon, the negative gamescript for the Raiders (as a team) should lead to a positive gamescript for Richard (as a fantasy player). Since the Amari Cooper trade, Richard ranks second in Oakland with a 17.7% team target market share (five per game). I’d consider that his floor this week.

Ellington has been a surprisingly big part of Detroit’s passing offense over the last two weeks, averaging eight targets (and six receptions) per game with Marvin Jones sidelined. Of course, thanks to his extremely low average depth of target of 3.6 yards, Ellington has managed just 80 yards on those looks. However, in PPR leagues, that volume is worthwhile, and it could lead to bigger plays in Week 13 against the Rams, who have given up the most fantasy points per target to wideouts.

The Jameis Winston-to-Brate connection predictably picked up where it left off in Week 12, with Brate finding the end zone on three receptions (26 yards). Brate is a good bet to score again in Week 13 against a Panthers defense that has surrendered nine tight end touchdowns this year — most in the NFL.

LaCosse caught three of four targets (tied for season high) for 34 yards and a score (his first of the season) last week, and with starter Jeff Heuerman now done for the season, LaCosse is in line for more work down the stretch. He should get off to a good start in Week 13 against the Bengals, who have given up the fifth-most fantasy points per target to tight ends.

Mayfield has been playing lights-out football recently. With over two scores in five straight games (and three or more in two straight). It won’t be smooth sailing in Week 13 against the Texans, though, as Houston has given up the fourth-fewest fantasy PPDB to quarterbacks this season.

Ryan draws a Ravens defense that has surrendered the third-fewest fantasy PPDB this year. The Ravens have only allowed a 300-yard passer once this season, and they have held enemy quarterbacks to just 15 touchdowns (tied for second-fewest in the NFL).

Michel returned from injury in dominant fashion in Week 12, dropping 21-133-1 on the Jets (with two receptions to boot). He’ll have a hard time replicating those stats in Week 13 against the Vikings, who have held enemy backs below 3.7 YPC this season while allowing just three rushing touchdowns against — tied for fewest in the NFL.

Mack has been on a roll this season while averaging a smooth 5.1 YPC, but he runs into a Week 13 wall against the Jaguars, who have given up the fewest fantasy points per touch to opposing running backs and the fewest total fantasy points to the position.

Ridley faces the Ravens secondary in Week 13, which has surrendered the fewest fantasy points per target to opposing wideouts this season. Wideouts have gained just 1,417 receiving yards against Baltimore this year — second-fewest in the NFL. Ridley has a high ceiling but also a low floor (he has three catches and fewer than 40 yards in two of his last three). He’s far more likely to hit his floor than his ceiling this week. 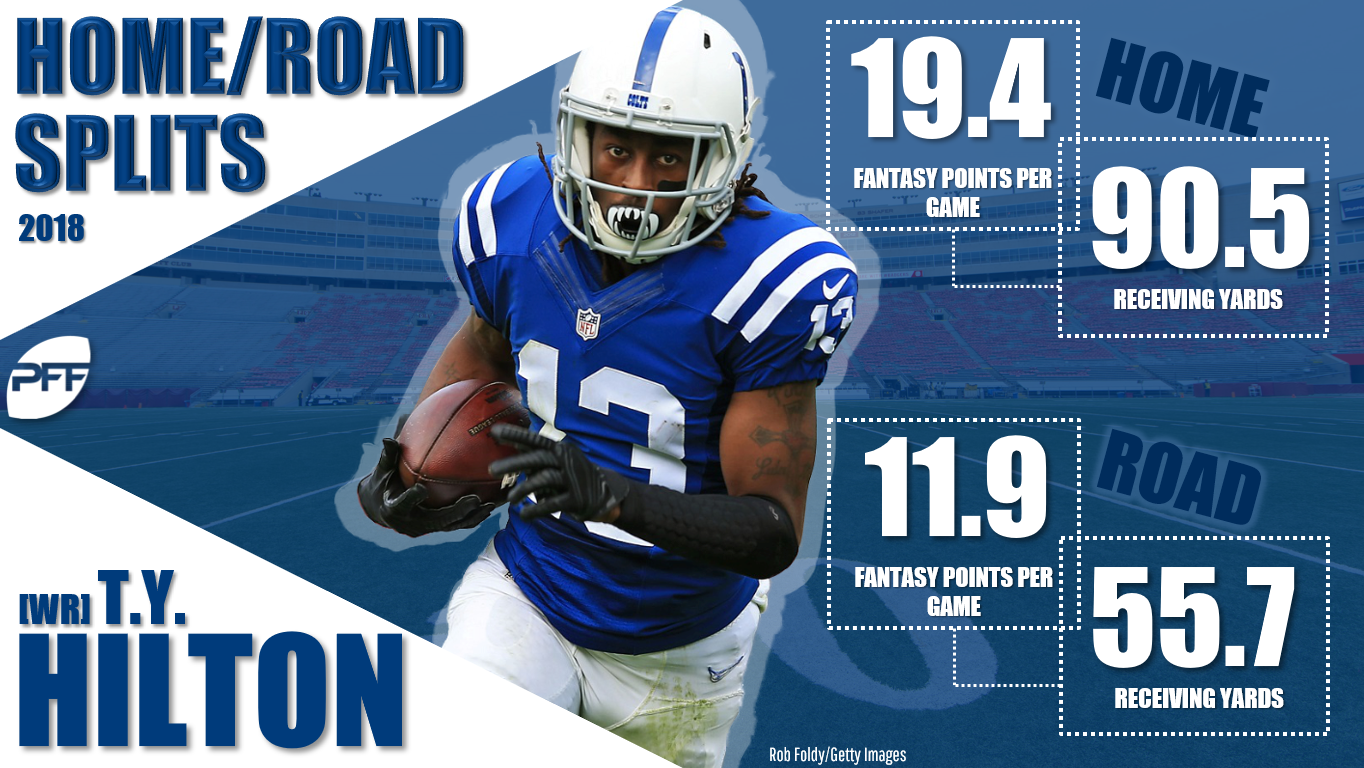 Hilton kept it rolling in Week 12 with a line of 7-125-0 (after posting 9-155-2 the week before). This week, however, he faces a Jaguars secondary that has given up the fourth-fewest fantasy points per target to opposing receivers. Additionally, Hilton will be playing away from the Indy dome, where he’s averaging just 56 yards per game this year (versus 91 at home).

Injured, but expected to play, McDonald has a tough Week 13 matchup against the Chargers, who have given up the third-fewest fantasy points per target to tight ends this season. McDonald has fewer than 30 yards in three of his last four, and he’s largely touchdown-dependent.

Coming off a big game against the Patriots in which he posted season-highs in targets (eight) and receptions (7), Herndon has a brutal Week 13 matchup against the Titans, who have given up the second-fewest fantasy points per target to tight ends this season. Tennessee is the only team to have kept opposing tight ends out of the end zone so far this season.