There is a common theme among the elite tier of running backs selected at the start of every single fantasy football draft: They see extremely heavy workloads as both rushers and receivers. As the drafts continue, the available running backs who are involved in both aspects begin to dwindle. Eventually, all that's left are one-dimensional running backs who operate either as rushers or receivers, but not as both.

There are occasional outliers, such as Derrick Henry in 2019, who find success despite limited roles as receivers, but the best strategy with running backs is to acquire ones with a well-rounded skillset. Outside of the start of the first round, this can be a challenge. But data shows that, on average, running backs entering their second seasons tend to progress in the passing game.

This suggests that second-year running backs might be undervalued if they were not used much as receivers in their rookie seasons, such as in the cases of Josh Jacobs and David Montgomery — the perception around them is that their usage as receivers in 2019 will be the same in 2020. But the data is contradictory to that idea and can give you an edge as you sort through your running back targets.

Running backs Saquon Barkley, Kerryon Johnson, Leonard Fournette, Kareem Hunt and Ezekiel Elliott all missed significant time in their second seasons due to injuries or off-field issues, which caused a large percentage-point decrease in passing game production for Year 2 running backs. When you extrapolate their reception total paces over a full 16 games in their second seasons, the average increase in receptions and targets climbs to 28% and 25%, respectively.

Running backs entering their second seasons are seeing expanded roles as receivers, but I wanted to dive deeper to identify if draft capital spent on the running back dictated an uptick in usage. For reference, the term “fourth-round-plus running backs” refers to any running back taken in the fourth round or later (including undrafted players).

I broke down running backs by draft position to identify the strength of draft capital's influence on the amount of passing work a running back saw after their rookie season. 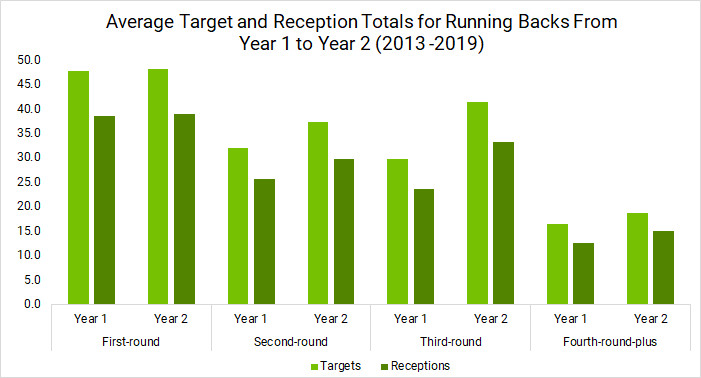 Second, the first-rounders are most affected by the decrease in receiving production from the shortened seasons of Barkley, Fournette and Elliott, as the sample size of first-rounders totals just eight running backs.

When their 16-game paces are added back into the sample, we get a more accurate depiction of the receiving production from first-round rookie running backs in Year 2. The same goes for second- and third-round picks when 16-game paces for Johnson and Hunt are added.

The major standout here from a draft capital standpoint is the third-round running backs who see an average 40% increase in passing production from Year 1 to Year 2 — all other rounds stay in the 14%-19% range. It is important to keep in mind that while these percentages are relatively close, first- and second-rounders are starting out with more receptions and targets in their rookies seasons, so they are likely to finish with more than their fourth-round-plus counterparts.

We can leverage this data to confidently project both Josh Jacobs and Miles Sanders to see expanded roles in their respective passing games. Where it gets interesting is when it comes to the third-round running backs from 2019 — as they could see the largest boost in passing game work.

This would include Montgomery, Devin Singletary, Alexander Mattison, Damien Harris and Darrell Henderson. That would help the bottom-line for the first two. And for the latter three, work in the passing game could end up being their contributing role in their offenses while working in tandem with another back. This could be the scenario for Henderson, who most fits the mold of a specialist receiving back for the Los Angeles Rams. When it comes to the later-round targets, the names to bring up are Justice Hill, Tony Pollard and Travis Homer.

Hill was heavily used as a receiver in the Baltimore Ravens’ last game in 2019 when they faced a negative game script. If the Ravens are forced to play more from behind in 2020, Hill could surprise and see an increased role in the passing game.

Pollard played slot receiver in college, so even in a stacked Dallas Cowboys offense, he is likely to improve on his 15 receptions from a season ago and has league-winning upside if injuries push him into a lead role.

Homer finds himself in a backfield with players who either do not profile as pass-catching backs or can't consistently stay healthy — a unit that includes Chris Carson, Carlos Hyde and Rashaad Penny. He has the chance the emerge as a primary pass-catching option in his second season with the Seattle Seahawks.

It is also worth mentioning that pass protection gets thrown around as a predictive reason why young running backs do not see as much involvement as pass-catchers early on. That is unproven, though — considering there is essentially zero correlation between PFF pass-blocking efficiency grades and receiving production for rookie running backs into their sophomore seasons.

You should be optimistic that running backs entering their second seasons will see expanded roles in the passing game. So when somebody decides to forego drafting Jacobs at the end of the first round or the beginning of the second round because the Raiders re-signed Jalen Richard and drafted Lynn Bowden Jr., you can capitalize on it.