Who are the best players for Saturday’s two-game DFS slate in Week 16 of the 2018 NFL season? This piece will highlight some of the best players and strategies for this short, special slate on both FanDuel and DraftKings.

We will go position-by-position for every relevant player on this two-game slate.

Philip Rivers has the hardest matchup of the four quarterbacks, but he’s also by far the most proven. Rives is a good GPP option as most people will probably gravitate to the next guy on our list.

Lamar Jackson will likely be the highest-owned quarterback of the slate because he’s slightly cheaper than Rivers, has a slightly better matchup, and has the incredible rushing floor.

Josh Johnson is the Lamar Jackson “light” of the slate. He has 45-plus rushing yards in his two games this year while throwing for over 150 yards and a score in each game. He’s a good pivot from Jackson.

Melvin Gordon is off the injury report and is the top overall play of the slate, even with the poor matchup. The Chargers are four-point home favorites with the highest implied total on the slate 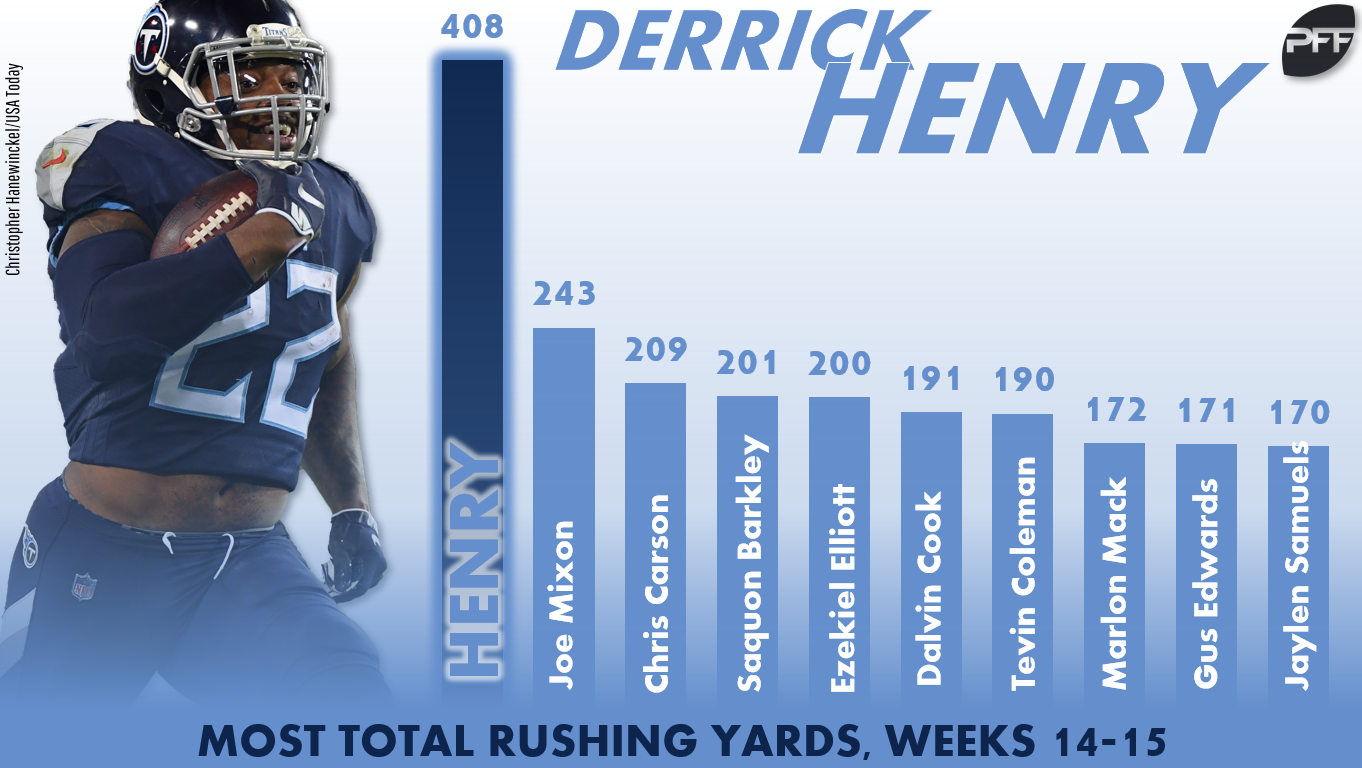 Derrick Henry is a fantastic play as a 10-point home favorite against the Redskins, who have allowed 132 rushing yards per game against over their last seven games.

Gus Edwards will likely face a negative gamescript, although the Chargers have allowed running backs to rush for eight touchdowns in their last five games.

Dion Lewis has still seen double-digit touches over the last two weeks (with Henry going nuts), but he’s nothing more than a large-field GPP dart throw.

Kenneth Dixon is averaging 10 touches per game since returning to the fold three weeks ago. Like most of the running backs on this slate, he’s a touchdown-or-bust cheap option.

Ty Montgomery is min-priced on DraftKings, where he’d be worth a look if he’s active. He was a coach’s decision inactive last week, though.

Chris Thompson is turning into an afterthought, with five or fewer carries and three or fewer receptions in four straight games. He’s not a bad large-field GPP play on DraftKings, but nothing else.

Adrian Peterson will most likely be gamescripted out of this contest, as the Redskins are 10-point road underdogs against the Titans, who have allowed the fewest fantasy points to running backs this season.

Justin Jackson didn’t see his price decrease despite Gordon’s clean bill of health. I’ll be avoiding him, but he’s not the worst dart throw; Austin Ekeler has seen some big weeks as Gordon’s backup (and Ekeler is out this week).

Keenan Allen is questionable but expected to play. The injury and matchup are both big negatives, but on such a short slate, he stands out as the clear best wideout.

Corey Davis might be shadowed by Josh Norman, and if it looks like that’s the case, I’ll likely be fading him. But he does have breakout potential, as the Redskins secondary overall as given up the second-most fantasy points per target to receivers. With so few good wideout options on the short slate, Davis is one of the stronger plays.

Mike Williams had his breakout game with three scores against the Chiefs, but this is a brutal matchup against the Ravens, who have given up the fourth-fewest fantasy points to wideouts. Williams is in play in GPPs giving his touchdown potential and big-play ability; Mike Evans did have success with big plays against the Ravens last week.

Tyrell Williams will be in play if Allen misses, but that doesn’t look likely. Mike Williams is rising, Allen should be back, and Gordon will be back. Bad news for Tyrell.

Jamison Crowder wouldn’t be in play on a regular slate, but with such limited options, he’s one of the least-bad options. He has at least four receptions in four of his last five with two scores in that span. His play didn’t dip with Johnson under center.

Willie Snead has 13 targets over the last two weeks — close to where he was pre-Jackson. He’s not a core play, but he’s back on the radar with only two games to choose from, but he does have the hardest matchup of Baltimore’s receivers, primarily against Desmond King, whose PFF grade of 90.5 ranks second among this week’s starting corners.

John Brown has a low floor — which has always been the case — but the problem is he doesn’t seem to have an accessible ceiling with Jackson playing quarterback. He has scored more than six DraftKings points just once since Week 8.

Michael Crabtree is the cheapest of the Ravens’ wideouts, but for good reason. He has fewer than 40 yards in seven straight.

Taywan Taylor has at least five targets in three straight games, and the Redskins have given up the second-most fantasy points per target to receivers (and he could completely avoid Josh Norman). He’s my favorite punt.

Josh Doctson is questionable, but if he plays, he’s an interesting cheap, low-owned option who should see a lot of coverage from the burnable Malcolm Butler. 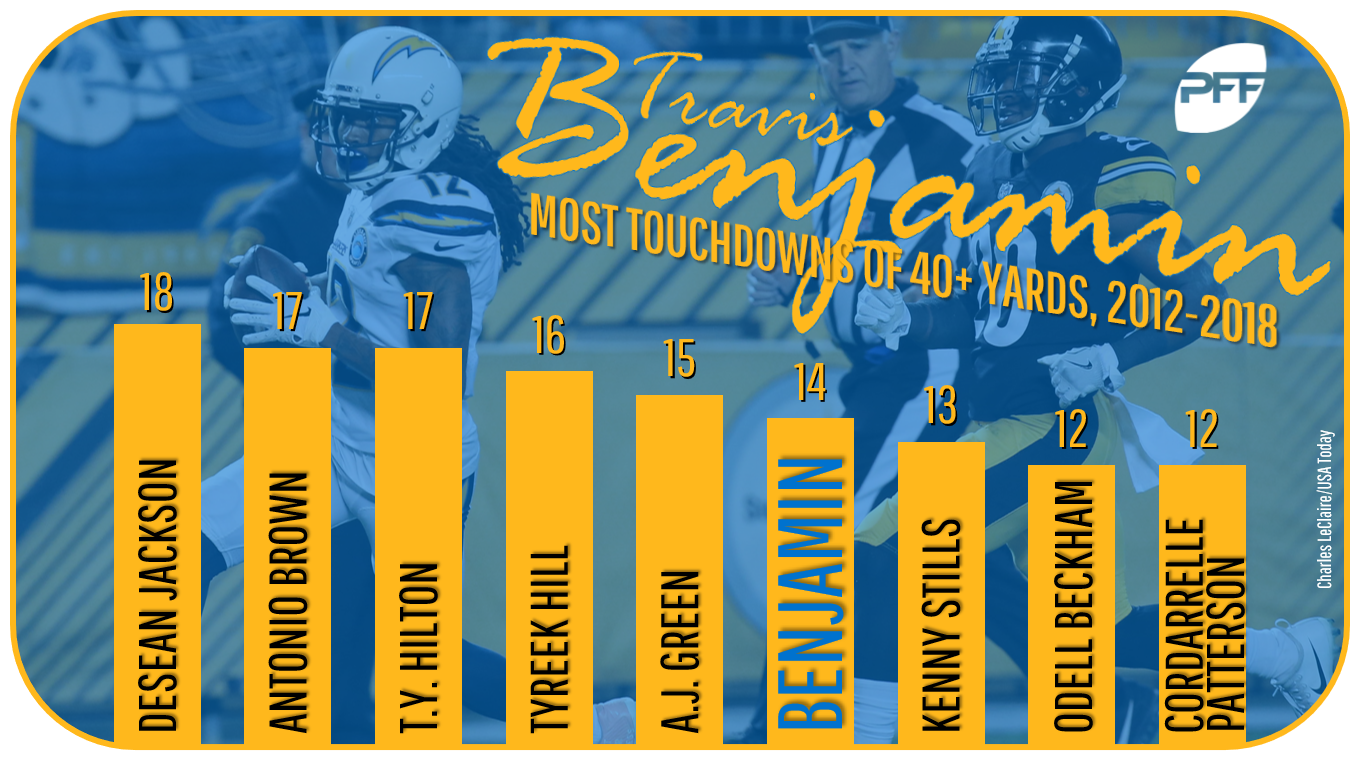 Travis Benjamin is always low-owned — even on short slates — but he needs just one play to return value. He’s in play in large-field GPPs.

Tajae Sharpe can be ignored, even with limited options on the slate.

Antonio Gates “leads” a pretty pathetic group of tight ends to choose from on this short slate, but there is reason to believe he’ll return decent value.

Anthony Firkser had no receptions last week despite playing his usual allotment of snaps (25). Prior to the goose egg, he had at least three receptions in four straight, so it’s reasonable to go back to him on Saturday.

Mark Andrews is a touchdown-or-bust punt that has recorded target counts of 1, 3, 2, and 4 over the last four games.

Jeremy Sprinkle will start for Washington, and he did catch three passes for 19 yards and a score last week, so I guess he’s worth … sprinkling into your lineups. What a freaking way to end this article.