Let’s dive into the PFF data and investigate the red-zone pass attempts that are most likely to result in touchdowns. This exercise will reveal both positive and negative touchdown regression candidates among NFL pass-catchers.

The closer an offense gets to the end zone, the likelier it is to score a touchdown. Since 2016, 69% of receiving touchdowns happened in the red zone. And as the offense gets closer to the goal line, the touchdown likelihood continues to increase — among all red-zone receiving touchdowns since 2016, 68% were from between the opponent’s 10-yard line through goal-line (defined as close-range targets moving forward). In fact, every time a quarterback threw a pass from close range since 2016, there was a 32% chance the play would result in a touchdown. In 2018 alone, the receiving touchdown rate from close range was even higher, 35%.

Many of these players should be top fantasy producers once again this season.

But what about touchdown variance?

Touchdowns fluctuate drastically from year to year due to variance. For example, Adam Thielen racked up a career-high 9 touchdowns last season on 149 targets. In 2017, Thielen had only 4 touchdowns on 135 targets. Was this just variance? Could we have foreseen Thielen’s touchdown spike? 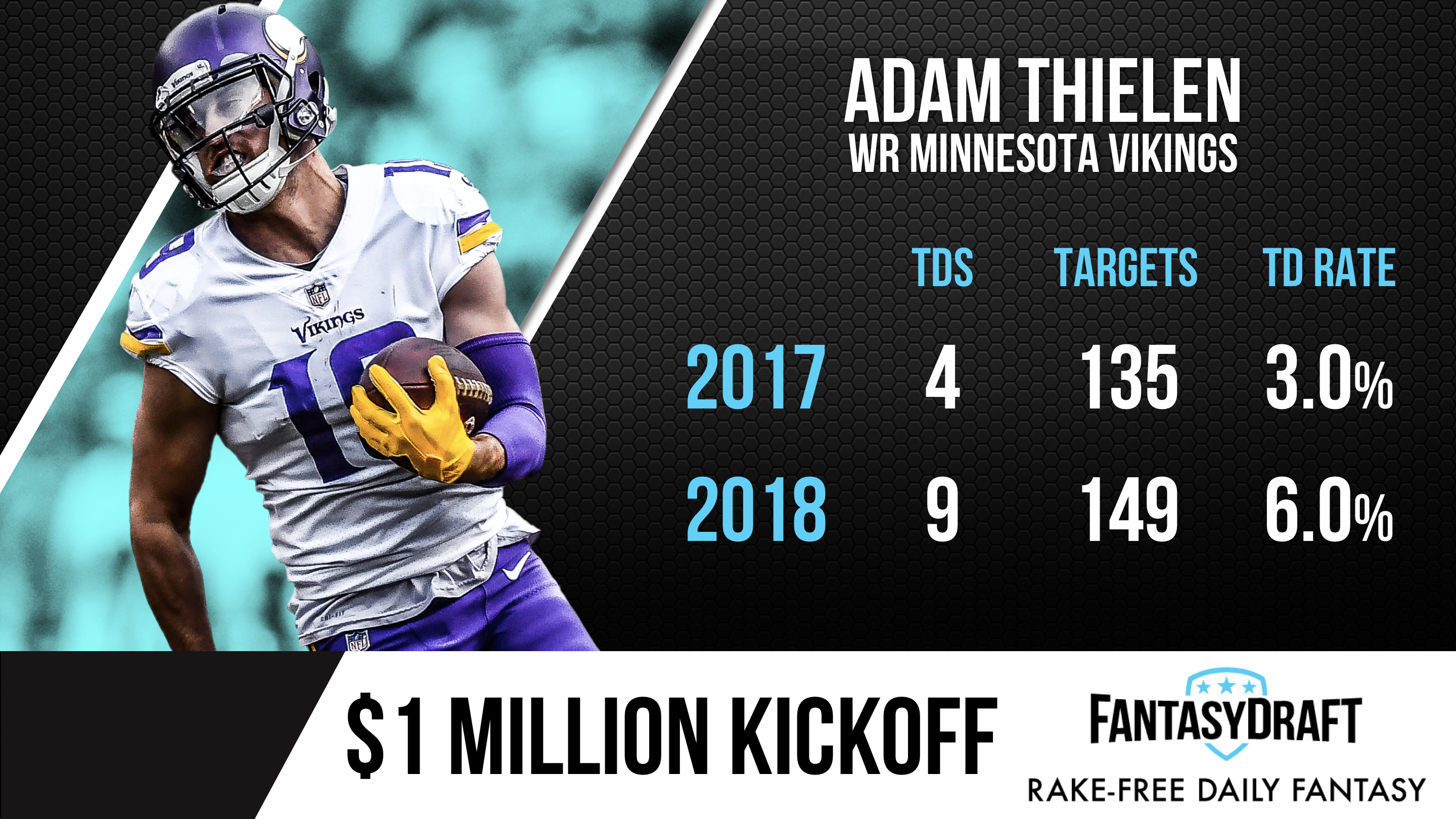 Digging into Thielen’s numbers, I found that he had seven close-range targets in 2017, but somehow only scored once on these plays. In 2018, Thielen had a much more reasonable four touchdowns on eight close-range targets. The extra 18 fantasy points from those additional 3 touchdowns would have made Thielen WR4 in 2017 rather than his actual WR10 finish. This is a great example of positive touchdown regression.

On the other end of the spectrum, Jarvis Landry had a stellar 2017 season that was buoyed by a career-high 9 touchdowns (previous high of five in 2014). Landry did most of his damage on close-range targets, where he scored a ridiculous 9 touchdowns on 14 targets.

Sure enough, negative regression hit Landry hard in 2018, where he caught a career-low 4 touchdowns – from close-range he had seven targets and just one score.

In hindsight, Landry should have been an easy fade at his third- to fourth-round average draft position in 2018, where he was frequently selected over wide receivers like JuJu Smith-Schuster, Brandin Cooks, Julian Edelman, and Robert Woods.

At 6-3 and 209 pounds with outstanding hands and body control, Davis is built like the prototypical big-bodied red-zone threat. The entire football community was drooling over Davis’ touchdown potential after witnessing his one-handed touchdown grab against the Patriots in the 2017 playoffs. Yet, confronted with a run-heavy offense and shoddy quarterback play, Davis limped to a disappointing 65-891-4 line last season.

Westbrook is a prime third-year breakout candidate as the alpha receiver on an improved Jaguars passing attack that replaces the erratic Blake Bortles with Super Bowl champion Nick Foles. While Westbrook posted a respectable five touchdowns last year, he could have bettered that mark with a little more touchdown luck.

From close range, Westbrook had seven targets while scoring just one touchdown. Four of those seven targets were deemed uncatchable — Westbrook hauled in all three targets that PFF analysts graded as catchable. Westbrook could be another value wide receiver from the 10th round.

Fantasy players who watched Robinson dismantle the Eagles secondary during last year’s Wild Card weekend are probably already targeting him in drafts. However, Robinson’s 55-754-4 line in his first year in the Windy City is suppressing his draft stock. At 6-3 and 211 pounds, Robinson is another ideal red-zone weapon and has a 14-touchdown season from 2015 under his belt. 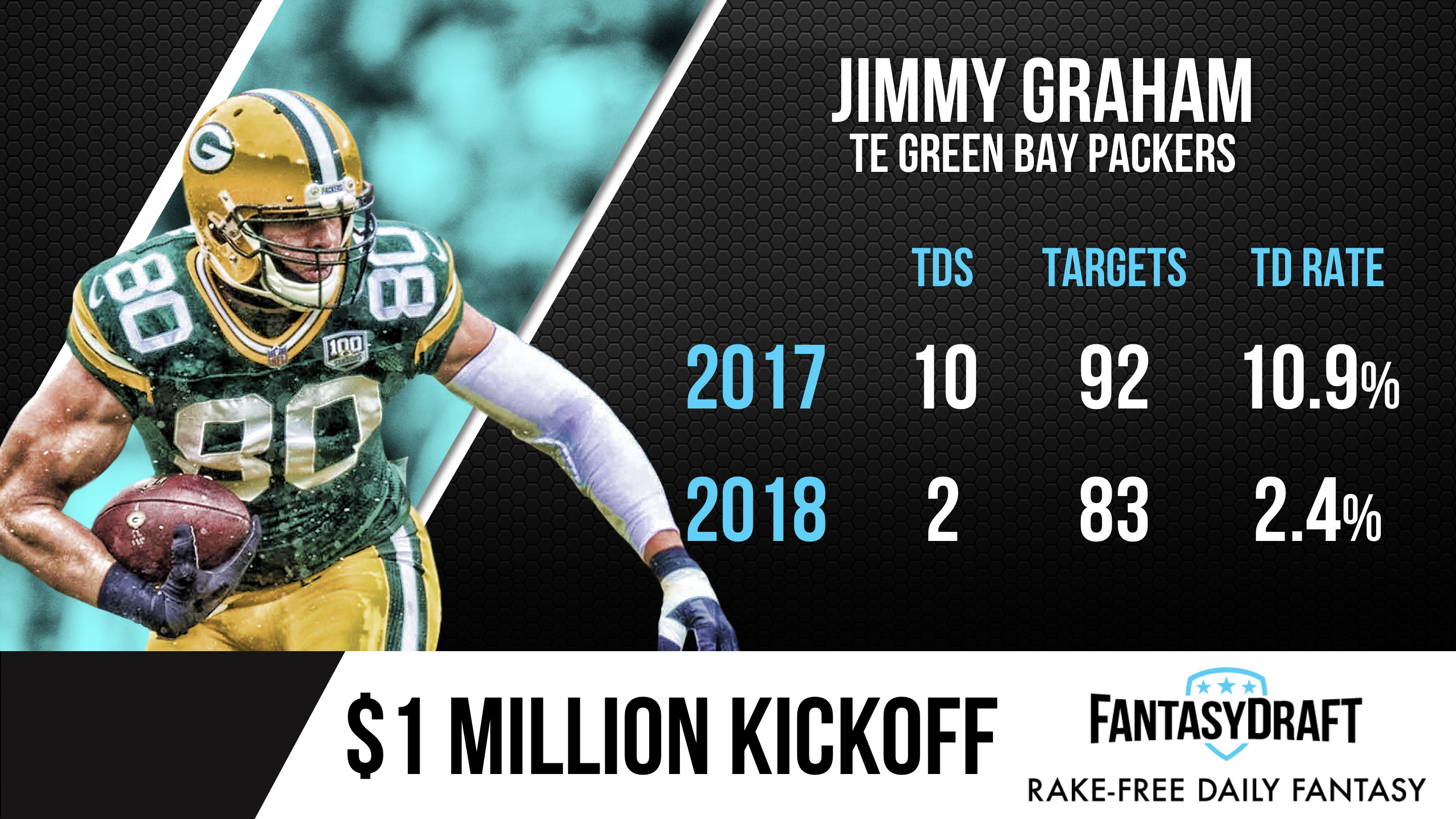 Negative touchdown regression hit Graham hard last season, and he did not perform up to expectations during his first year in Green Bay. In 2017, his final year in Seattle, Graham had a league-leading 16 close-range targets and reeled in eight touchdowns. In 2018, Graham’s close-range target count dropped to five, of which he had only a single catch for one touchdown.

If Graham can stay on the field, it would not surprise to see him haul in a few more touchdowns this season. Remember, Aaron Rodgers will be throwing him the football.

Players to be wary of negative touchdown regression

A quick glance at Williams’ breakout 43-664-10 line screams unsustainable production. Yet, he has a fifth-round ADP in the range of Tyler Boyd, Cooper Kupp, and Tyler Lockett. The surface reasoning makes sense as Tyrell Williams is gone, and Mike Williams should soak up a lot of those targets. Williams is immensely talented and has a six-foot-four and 220-pound frame — he will be a red-zone monster.

But looking at Williams’ close-range targets, it appears that he may have been a bit lucky. He had nine close-range targets last year and caught six of them for six touchdowns. If he were coming off a 5- to 7-touchdown season, would Williams still have a fifth-round ADP?

While Diggs is a proven superstar, his career-high nine touchdowns from last season may be difficult to repeat. Target competition is the biggest factor working against him as he will be contending with Kyle Rudolph and Thielen for close-range targets. Since 2016, Rudolph’s 29 close-range targets rank second-most among all NFL pass catchers, trailing only Michael Thomas. Thielen is second on the Vikings with 19 close-range targets and Diggs is last among the trio with 16. Ranking third on the pecking order for close-range targets on a team that loves to run the football could leave Diggs vulnerable to poor touchdown luck.