EAST RUTHERFORD, NJ - AUGUST 26: Orleans Darkwa #26 of the New York Giants celebrates his touchdown with teammate Justin Pugh #67 in the first quarter against the New York Jets during a preseason game on August 26, 2017 at MetLife Stadium in East Rutherford, New Jersey (Photo by Elsa/Getty Images)

Welcome to our weekly look at potential breakout fantasy performers based on point-per-opportunity data.

We’ve reached November, so if your 2017 “breakout” candidate hasn’t broken out yet, you might need to start looking to 2018 for season-long breakouts. But that doesn’t mean certain players can’t have breakout games this late in the season.

Here is the PPO against data through Week 8: 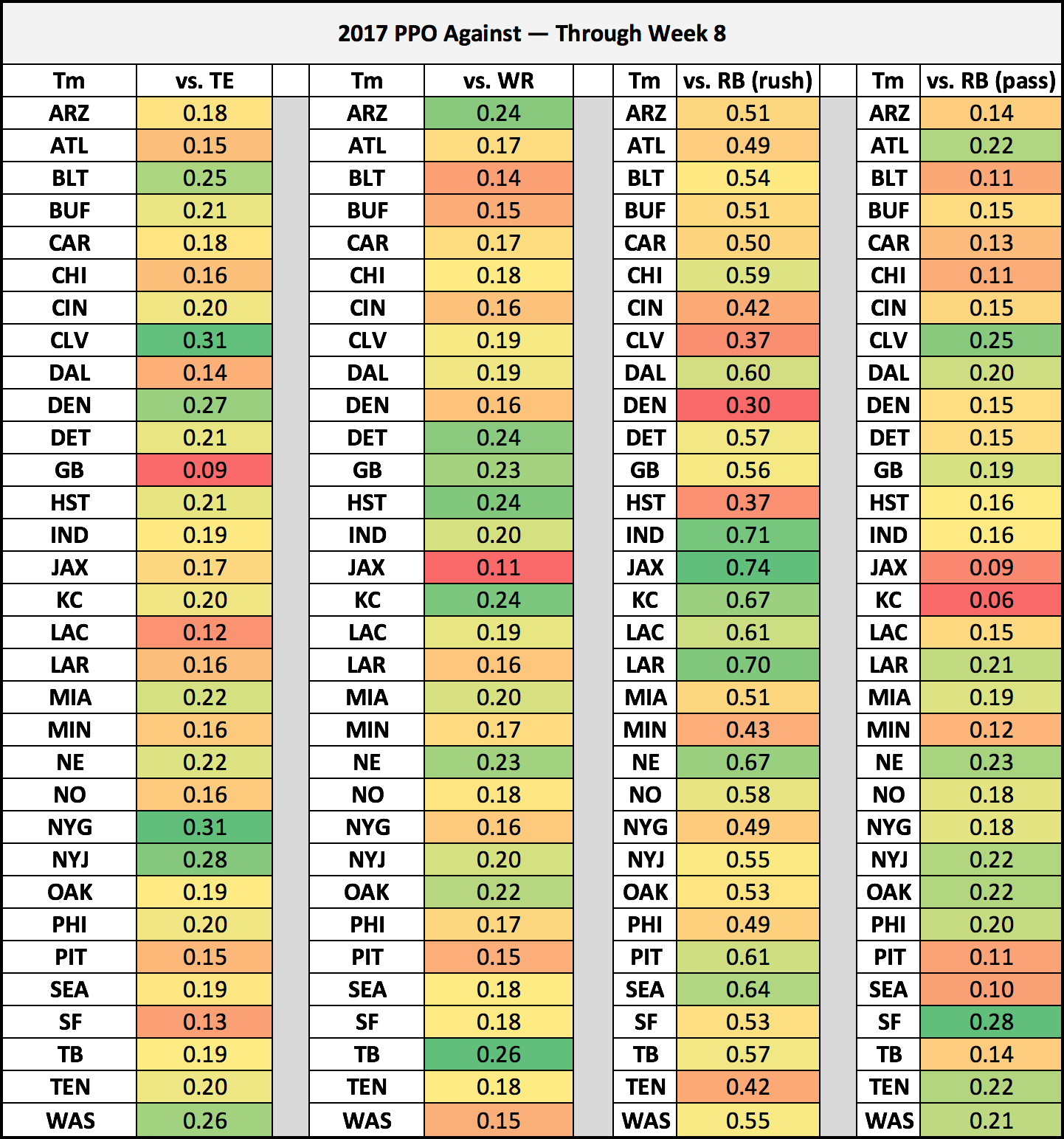 Below some players that are prime to break out in Week 6, according to the PPO data. (To see individual player PPO scores on a weekly or season-long basis, check out the Fantasy Stats section in our Tools lab.)

Lamar Miller had a good game in Week 8, but he has still yet to top 80 yards in a game. He could be looking at this first 100-plus yard effort in Week 9 against the Colts, who have given up the second-most PPO to opposing backs on the ground. The Colts have also given up a league-high eight rushing scores to running backs. Miller will add to his total in that area this week.

Darren McFadden or Alfred Morris could be in for big Week 9s. Morris will be the starter in Ezekiel Elliott’s absence, so he’s the better bet, but McFadden is fresh. The matchup against the Chiefs is better than it looks, as Kansas City has given up the fifth-most PPO to opposing running backs on the year. Including liens of 19-108-0, 35-196-1, and 29-157-1 in three of their past four.

I like Orleans Darkwa as a bounceback candidate this week. He’s not a sure bet, but Darkwa is averaging 5.4 YPC this season, and the Rams have given up the third-most PPO to opposing backs. He’s in a timeshare with Wayne Gallman, but Darkwa is the better bet to have a big game.

This is the week of Christian McCaffrey. No, really. The Falcons have given up the fourth-most PPO to opposing backs through the air, which is where McCaffrey shines. His 49 receptions are third in the entire NFL, not just among running backs, and the Panthers just traded away their No. 1 wideout, Kelvin Benjamin. Give me all of the McCaffrey this week.

If you are looking for a sneaky play — maybe in DFS — you should consider Marquise Goodwin this week. Patrick Peterson should be shadowing Pierre Garcon, which will leave Goodwin free to get loose behind Arizona’s secondary, which has given up the fourth-most PPO to enemy wideouts this year.

This is a big Michael Thomas breakout spot against the Buccaneers, who have given up the most PPO to opposing receivers on the year. Thomas’ 42 receptions are tied for seventh-most in the NFL, but he’s still searching for his first 100-yard game of the year. He has at least seven receptions in four of his past five outings, and he’s a prime candidate for a huge Week 9 in the superdome against the worst pass defense in the NFL.

Dez Bryant should eviscerate the Chiefs secondary, as he’ll run most of his routes away from Marcus Peters. The Chiefs have given up the second-most PPO to opposing receivers on the year, and Bryant, like Thomas, is still searching for his first 100-yard effort. Bryant’s breakout game is coming.

DeVante Parker gets to tee up against the Raiders in Week 9, a team that has given up the eighth-most PPO to opposing receivers on the year. A healthy Parker saw target totals of 9, 10, and 8 with Jay Cutler in action earlier this year, and Cutler will be back under center in Week 9. Parker’s first game back will be a big one.

Jimmy Graham technically had his breakout in Week 8 (two touchdowns), but he’ll keep the ball rolling in Week 9 against the Redskins, who have given up the fifth-most PPO to enemy tight ends this year.

The Zach Ertz breakout year will continue against the Broncos, who have given up the fourth-most PPO to opposing tight ends on the year.

Want a real deep sleeper? Try Nick O’Leary of the Buffalo Bills. The Jets have given up the third-most PPO to the position this year, and they have been cashed for exactly six receptions, anywhere from 65-85 yards, and 1-2 touchdowns by tight ends each game for the past month.

Jared Cook sets up as a TE1 option in Week 9 against the Dolphins, who have given up the seventh-most PPO to opposing tight ends this year. Cook quietly ranks in the top 10 among tight ends in targets (44), receptions (31), and yards (373). However, he has just one touchdown this year. But that could change in Week 9, as Miami has ceded a touchdown to tight ends in three of their past four contests.