Fantasy Football: The Guide to Selecting 1.11 in 2021 Best Ball Drafts

The end of the first round is a fantastic spot in fantasy football drafts, as it offers a variety of paths to a 2021 best ball title. The beauty of the 1.11 draft slot is the additional control in player selection with near back-to-back picks in every round.

There are two preferred strategies with the first and second picks when picking at 1.11:

Let’s dive into the plan for building a top-tier best ball roster out of the 1.11. 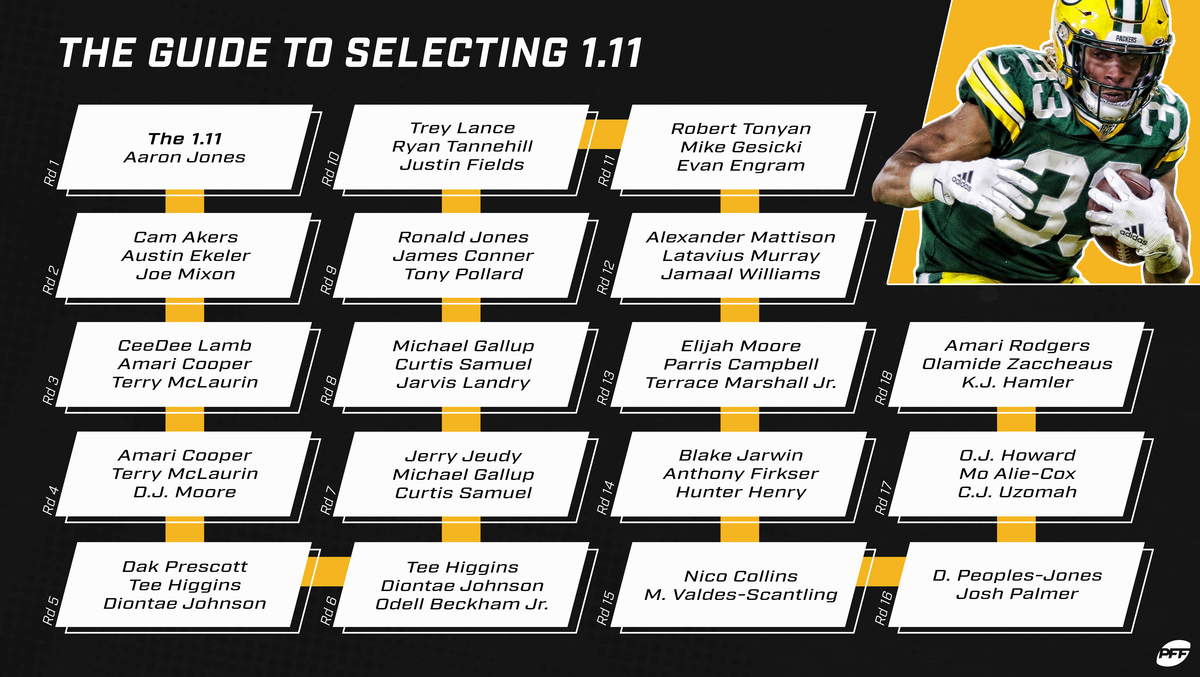 Aaron Jones is the ideal choice at 1.11 from a floor and ceiling perspective. He is most likely to post a top-five season among the Tier 2 running backs. Here are his overall PPR fantasy finishes among running backs in the last two seasons:

Jones is being drafted outside the top 10 despite finding himself in a better situation than both 2019 and 2020. Jamaal Williams has been a consistent thorn in the side of Jones fantasy managers, siphoning off valuable receiving usage with 77 catches and six touchdowns over that two-year stretch. With Williams off to Detroit, expect Jones to see a sizable receiving bump in 2021.

A.J. Dillon will demand a decent rushing workload, but Jones has proven to be a highly efficient runner who thrives with modest volume — the Green Bay star has averaged a stellar 5.0 yards per carry since 2019, trailing only Derrick Henry and Nick Chubb.

The Aaron Rodgers situation holds a dark cloud over the fantasy prospects of all the Packers, but Jones is the one player best equipped to handle a departure of the future Hall of Famer. Of course, Green Bay’s offense will be significantly worse without Rodgers under center. However, what Jones loses in touchdown upside he will gain in both rushing and receiving volume.

PFF’s fantasy projections rank Aaron Jones as the No. 3 overall running back for 2021.

Cam Akers possesses legitimate No. 1 running back upside with true bell cow usage. Over his last six games (including playoffs), he averaged a whopping 23.8 touches and 118.0 total yards. An unleashed version of Akers could realistically join the Dalvin Cook and Saquon Barkley Tier 1 of running backs.

Rams head coach Sean McVay has relentlessly hyped Akers this offseason. As seen in the glory days of Todd Gurley, McVay is unafraid of loading up his RB1 with a monster workload.

The 1.11 draft spot is perfect for the robust running back strategy. Grab two studs and then load up on elite wide receivers with the next few picks.