Half of the NFL season is already behind us. Eight games is a small sample size in the scope of a player’s career, but it’s two-thirds of the fantasy football regular season. What would 16 games’ worth of production look like if every player maintained his current pace through the end of the season?

I thoroughly enjoy this exercise because it puts paces in context of NFL history and forces me to look at leading indicator metrics with an actionable eye. It’s important to understand what’s driving production (or the lack thereof) to decide which players are buys, holds, and sells as you chase the titles. In 2017, we correctly identified that selling Kareem Hunt for Le’Veon Bell could be a league-winning move after Week 4. In 2018’s quarter-season pace piece, I suggested that Patrick Mahomes wasn’t going to cool off (he’s still the QB1, and by nearly 50 points), that Keenan Allen’s lagging production might be the truth (so far, absolutely nothing has changed) and that Carlos Hyde was an easy sell. 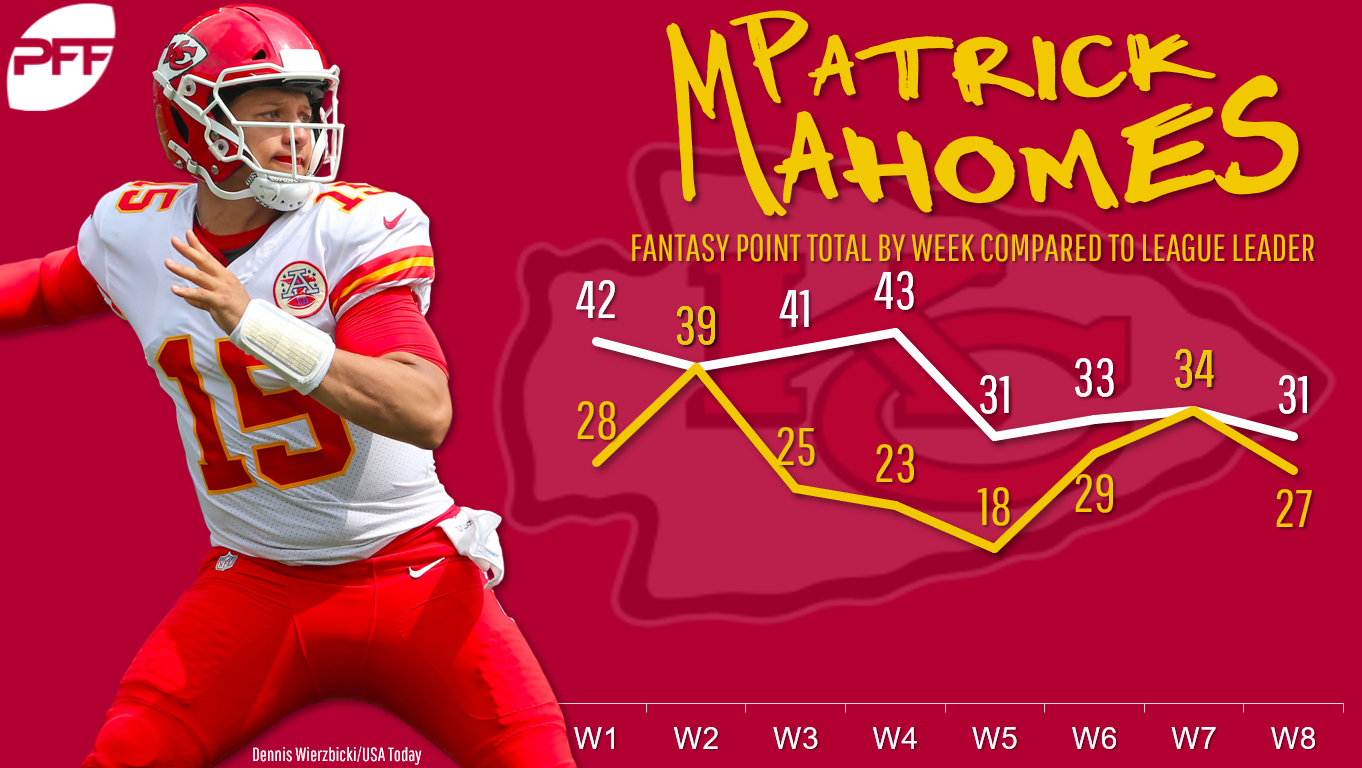 The question after four games was: can he sustain it? The answer, in short, has been yes. Mahomes’ first four games were the most efficient in the PFF era, as he effectively scored 0.77 fantasy points per dropback. Through eight games, Mahomes is still scoring fantasy points at a rate of 0.72 PPDB, with his interceptions really being the only downward driver over the past four games. His rushing production hasn’t cooled either; he’s added another 66 rushing yards and a rushing touchdown to his totals since we last checked in. At this point, Peyton Manning’s record 432-point season has been put on notice.

Luck has been red-hot since the final week of September, amassing five consecutive games with at least three passing touchdowns. His previous career high was three consecutive in 2014. He’s done this despite a receiving corps that has battled injuries all season; no player has 400 receiving yards through the team’s first eight games. Luck has thrown touchdowns to 11 different players, including one to something called Mo Alie-Cox. It’s been a delight to see him regain his prior form. Luck’s previous career high is 40 passing touchdowns, and I think that’s a good over/under line to set for season’s end because I think he’ll cool off ever so slightly in this department due to the recent breakout of Marlon Mack.

Trubisky is tied for QB6 in total fantasy points through eight league games, but the Bears have already had their bye — yes, Trubisky is QB6 even spotting most of the field a game (he’s QB5 in points per game, if you prefer that metric, though it means we add Ryan Fitzpatrick in). A huge contributing factor has been his rushing production. Trubisky is second among quarterbacks with 296 yards, trailing Cam Newton by a mere four yards. He has two touchdowns via his feet as well. If paces hold, his 677 yards will be the fourth-most by a quarterback over the past five years (Newton is on pace for 686). This development is huge for Trubisky’s season-long outlook and his dynasty outlook alike. Since 2013, the leading rusher among quarterbacks has finished as a top-five fantasy QB four times.

Let’s just take a moment to appreciate how impressive Gurley has been so far this season. He’s 33 points clear of PPR RB2, Saquon Barkley and an astonishing 120 points clear of PPR RB12, Tarik Cohen. Gurley’s 235 points are the most by any player (including quarterbacks!) through eight games in the PFF era (2007-present).

David Johnson is the only running back who has eclipsed 400 PPR points in a season during the PPF-era (2016). Gurley should shatter the mark this season en route to one of the greatest statistical seasons by any running back in NFL history.

The problem with actually hitting 470 PPR points is the Rams are just too good. Gurley owners already collectively cringed in Week 8 when the back purposely allowed himself to be tackled inside the 5-yard line as time ran down. For this 470 number to occur, the Rams are going to have to lose at least two games, I think. Otherwise it will just be too tempting for Coach Sean McVay to rest the superstar after playoff position has been locked in, as he did last season.

Barkley’s incredible season is somehow being overlooked because of a perfect storm of circumstances: Fantasy Twitter can’t look past the Giants decision to take him instead of a quarterback, the Giants are still terrible despite his performance, and Gurley is scorching the earth and hogging the spotlight.

Barkley has a legit shot at putting together just the third 1,000 rushing yard/1,000 receiving yard season in NFL history.

As a rookie. On a terrible team.

The previous two backs to accomplish the feat were Marshall Faulk in 1999 and Roger Craig in 1985.

He’s dangerously close to on-target to his both numbers, so there isn’t much room for error here. However, his consistency has been remarkable over the first half of the season and this isn’t really being fed by any boom-type games from a yardage perspective. He’s surpassed 100 yards from scrimmage in seven of eight contests. He’s essentially the team’s WR2, with 58 receptions (which is actually good for fourth in the NFL right now). If this pace is holding up through, say, 13 games, then I don’t see how the team doesn’t invest in helping him achieve the mark in what will otherwise be an extremely forgettable season in franchise history.

If Barkley’s rushing production were to fall short of 1,000 yards, he could still set records and join exclusive clubs for his receiving work at the position.

Barkley is on pace to shatter the NFL record for most receptions by a running back in a single season, with 116. The current record is 102, set by Matt Forte in 2014. If he does end up with more than 1000 receiving yards, he’ll be just the fourth running back in NFL history to do so (Faulk, Craig, and Lionel James the others).

For fantasy purposes, Barkley is also on pace for over 400 PPR points, which as I mentioned earlier, is rarified air. With an extra touchdown between now and season’s end, Barkley’s adjust pace would exceed David Johnson’s mark of 407 in 2016.

Thielen is currently PPR WR1 by a margin of 37 points thanks to ranking first in receptions and receiving yards and third in receiving touchdowns. His 74 receptions are the most through Week 8 of a season during the PFF era (2007-present). If he can hold this pace, he’ll set a new NFL record, breaking the current mark of 143 (Marvin Harrison, 2002). Even if he falls just a few receptions off pace, he can still become just the second player in NFL history with 140 or more receptions in a season.

The volume has been there consistently, so I think this is a mark we’ll have to keep a close eye on for the rest of the season. Thielen has seen at least 10 targets in seven out of eight games, never posting fewer than six receptions. 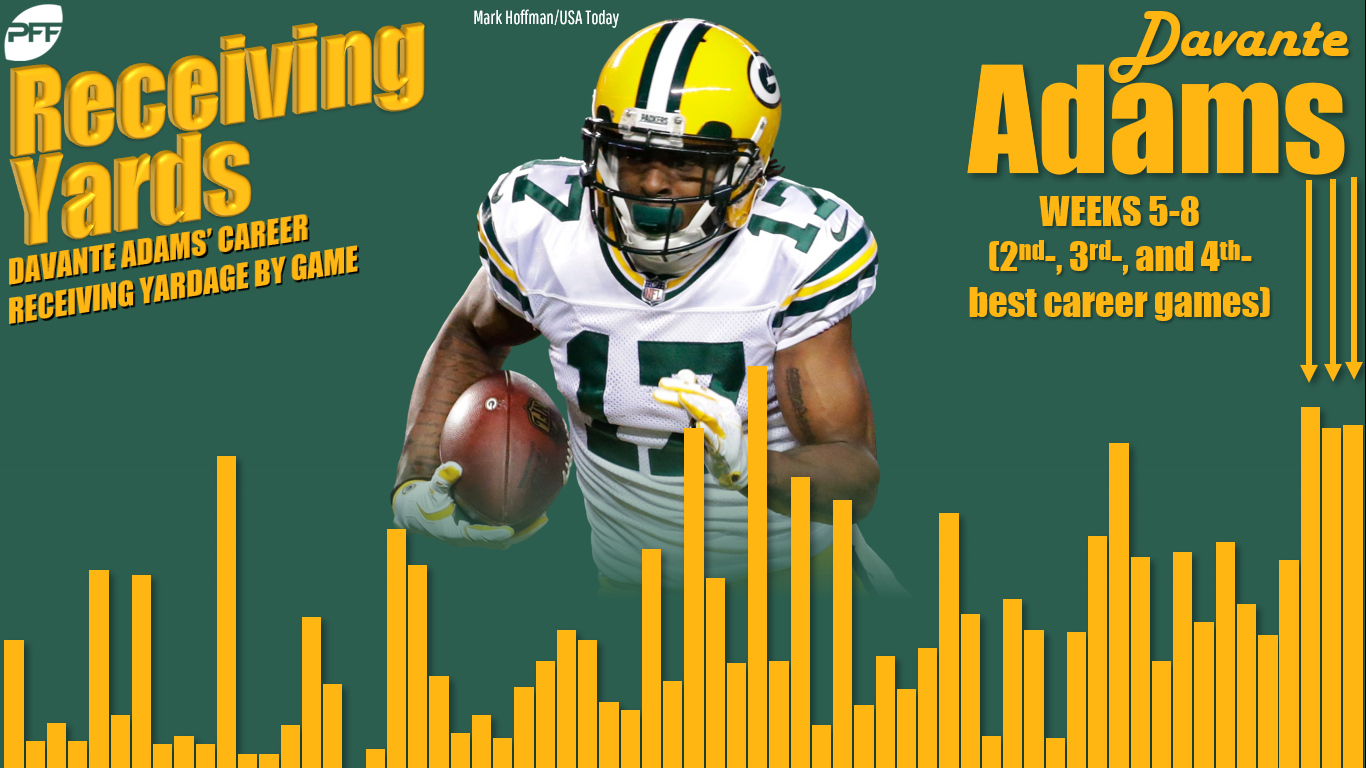 Adams is PPR WR2 in points per game, with 22.4 per contest, though he checks in at WR4 in raw scoring due to Green Bay already having its bye week. Adams is pacing for career highs in targets, receptions, receiving yards, and touchdowns – a perfect sweep. For fantasy frame of reference, if his per-game production holds, he’ll score 358 PPR points, which would’ve easily been WR1 in 2017 or 2016.

Adams has truly emerged as an alpha target and is tied to arguably the best quarterback in the game today. If he’s not in your dynasty top-five at the position, you’re doing it wrong.

Ertz (1,288) and Kelce (1,284) are both on-pace for over 1,200 receiving yards, a mark only achieved seven times by tight ends in NFL history. The single season position record is 1,327, set by Rob Gronkowski in 2011. Interestingly, 2011 is the only season in which two tight ends eclipsed 1,200 yards in the same season (Gronkowksi and Jimmy Graham). Both Ertz and Kelce have an outside shot to set a new mark; however, Kelce seems like a much better bet. As mentioned earlier, Mahomes could end up with over 5,000 passing yards this season, so unless the Chiefs add another substantial weekly target-getter to the mix each week moving forward, Kelce should be able to maintain his pace. Ertz, on the other hand, may have more trouble. The Eagles traded for Golden Tate at the deadline, a player who does his damage in the same area of the field as Ertz, and one who will command some significant target share. Both players have made a living on looks under 10 yards this season. Nearly 82% of Tate’s targets have been less than 10 yards deep and over 65% of Ertz’s targets have occurred in the same area.