Leverage PFF’s Week 15 fantasy football rankings and DFS ownership projections as close to lock as possible. Knowing what your competitors are going to do ahead of time provides an edge that simply not enough DFS gamers take advantage of. Focus your attention in cash formats on high-rostered value players and pivot to lower-rostered ceiling players in GPPs.

In terms of matchups that are projected to be high-scoring based on the offensive pace of play over the last six weeks: Baltimore Ravens–Green Bay Packers (one vs. sixth), the Miami Dolphins–New York Jets (fourth vs. 13th), Philadelphia Eagles–Washington Football Team (14th vs. third), Denver Broncos–Cincinnati Bengals (sixth vs fifth) and Pittsburgh Steelers–Tennessee Titans (10th vs.17th). 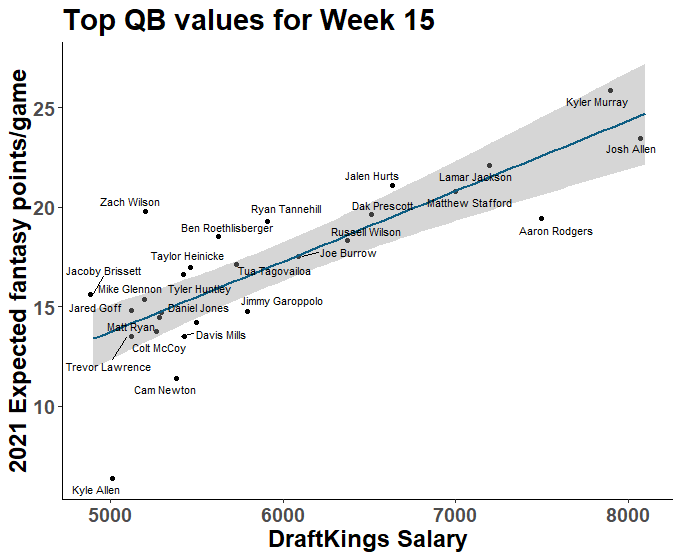 Murray obviously has the highest ceiling due to his mobility against a lowly Lions defense that is the No. 1 matchup for QBs, per PFF’s strength of schedule tool. The only concern is how much will Murray be required to do as such heavy favorites.

Rodgers faced a decimated Ravens secondary, putting him in an excellent spot. But without Lamar Jackson on the other side to press Green Bay’s offense, this game could be the A.J. Dillon show by the third quarter. I’d much rather use Rodgers in tournaments.

That’s why I settled on Stafford ($7K) as my favorite expensive QB in cash games. The Seahawks can do enough on offense to keep the Rams offense humming, and their defense poses little to no threat after giving up the second-most passing yards to QBs over the last four weeks.

Dak Prescott is the market’s favorite at $6.5K with the highest projected rostership.

It’s been a rough four-week stretch for Prescott, as he has finished outside the top-20 quarterbacks in three of his last four contests. He has scored 23.9 fantasy points under expectation — by far the highest mark among quarterbacks. Prescott should have close to 1,200 passing yards and 7.4 passing touchdowns since Week 11, but he has totaled just 1,040 passing yards and four passing touchdowns.

Nonetheless, with all three of his top wide receivers back and healthy, Prescott should produce at a high level once again a plus matchup versus the New York Giants, who have allowed multiple passing touchdowns in three of their past four games.

Death, taxes and Joe Burrow double stacks. The Bengals quarterback is the No. 1 PFF passer versus man coverage this season (90.8). The Broncos have played the fifth-most man coverage snaps this season. Stack them.

Tagovailoa, coming off a bye, has an extremely easy matchup in Week 15 versus the Jets.

The Alabama product scored 18.5 fantasy points the last time he faced the Jets, who have also allowed at least 16 fantasy points to every opposing starting quarterback this season since Week 4. They rank seventh in fantasy points per game allowed to the position over the past four weeks. The Dolphins quarterback is my preferred pay-down QB in cash formats even without Jaylen Waddle.

The San Francisco 49ers take on the Atlanta Falcons in Week 15, which is about all the analysis you need to consider Garoppolo in GPPs against a defense that ranks in the bottom five in fantasy points allowed per game to the position over the past five weeks.

DFS gamers should be confident that Garoppolo can deliver a borderline QB1 fantasy performance in an offense littered with playmakers. He is fantasy football’s QB10 in fantasy points per game (18.1) since Week 8.

Huntley has averaged over 40 rushing yards in his two games this season, and the Packers are a sieve against mobile quarterbacks. No team has allowed more rushing yards to opposing signal-callers than the Packers have this season. Monitor Jackson's status, and play Huntley accordingly in large-field GPPs.

It has not always looked pretty, but Roethlisberger has been getting it done for fantasy football. The Steelers quarterback has finished as a top-15 fantasy option in four of his last five games, including two finishes inside the top eight. He’s an ultra-contrarian option in Week 15 versus an exploitable Titans secondary. 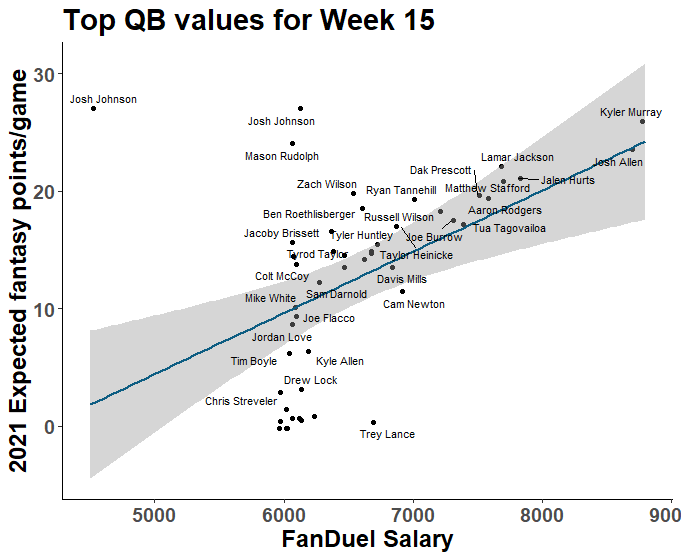 There are no $8K-priced running backs on the Week 15 main slate due to so many of the studs playing on primetime, which leaves just three backs — Najee Harris, Joe Mixon and Ezekiel Elliott —  who DFS prices are over $7K. The Tennessee Titans give up the second-fewest fantasy points to the RB position, while Denver ranks seventh.

Neither Harris nor Mixon scratches the itch for cash games, but it’s impossible to overlook Mixon’s 25-plus touches per game in his last four starts, especially at low-projected rostership versus a defense that is overdue to allow rushing touchdowns. The Broncos have allowed a rushing touchdown to any running back this season that has carried the ball at least 16 times against them.