Leverage PFF’s Week 10 fantasy football rankings and DFS ownership projections as close to lock as possible. Knowing what your competitors are going to do ahead of time provides an edge that simply not enough DFS gamers take advantage of. Also, be aware of the GPP-contests you are playing. Take a look at the winner’s lineup each week and take note of the roster construction.

Related content for you: Week 10 WR/CB mismatches and shadow coverages to leverage in DFS & fantasy football leagues via Ian Hartitz

In terms of matchups that are projected to be high-scoring based on the offensive pace of play: Minnesota Vikings-Los Angeles Chargers (11th vs. eighth), Dallas Cowboys–Atlanta Falcons (fourth vs. 12th) Tampa Bay Buccaneers–Washington Football Team (third vs. 16th), Carolina Panthers–Arizona Cardinals (fifth vs. seventh) and Detroit Lions–Pittsburgh Steelers (ninth vs. 12th) rank atop the main slate. 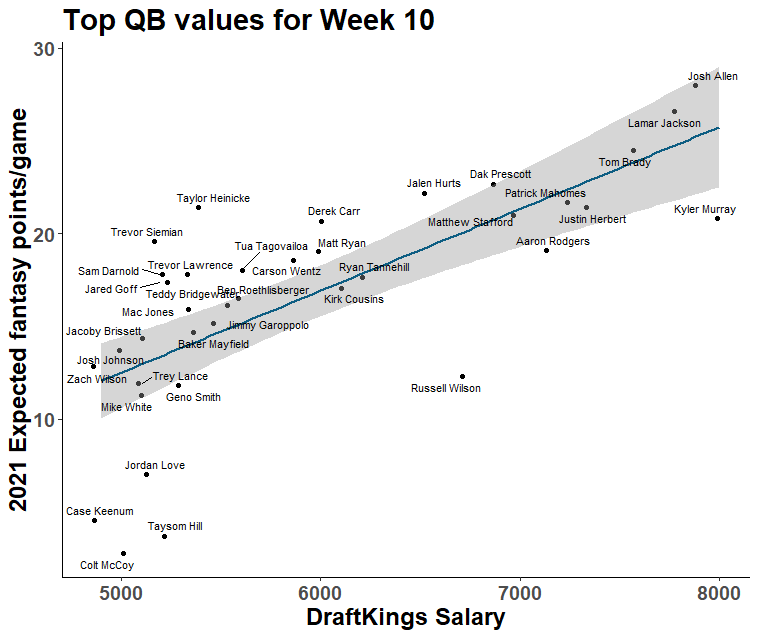 I’m breaking my cardinal rule once again cash formats, as I'm not automatically jamming in Jalen Hurts ($6,500) even though the Philadelphia Eagles quarterback has been a top-12 overall finisher in his 11 full games as an NFL starter. Last week, he squeaked out a No. 12 overall finish because of his 62 rushing yards.

His rushing equity — 50-plus rushing yards per game — is second to only Lamar Jackson and the major reason why he has been bulletproof in cash games. Nonetheless, I’ll admit that back-to-back sub-17 point performances — in addition to facing a Denver Broncos defense that just man-handled the Dallas Cowboys — has me entertaining other potential cash QBs if we have the salary to move up.

Dak Prescott is the best pay-up value for cash at $6,900 — even after an abysmal Week 9 performance. Prescott completed less than 50% of his pass attempts — his lowest completion rate since his rookie season. He was out of sorts after so much time off.

And as a result, CeeDee Lamb and Amari Cooper tanked fantasy lineups. Nonetheless, they still combined for over 300 air yards and six deep targets. That’s the tell-tale sign that this entire passing game is slated to bounce back ahead of a matchup versus the Atlanta Falcons, who rank 25th in explosive pass-play rate faced this season. They also rank 30th in passer rating and 32nd in EPA per play allowed when facing 11 personnel (one running back, one tight end and three wide receivers), which Dallas ran on 82% of their plays last week without Blake Jarwin.

Nonetheless, the best move is to roster the fantasy football leader in fantasy points and expected fantasy points per game — Josh Allen ($7,900). The New York Jets have allowed the most fantasy points to QBs over the last four weeks, setting the Bills up for a nice bounceback spot.

In tournaments or even in cash if money is available, playing Tom Brady ($7,600) versus the Washington Football Team is the preferred option. Washington has been the single-worst defense versus QBs this season, and Brady leads all QBs in fantasy points per game (26.4), which is quite a feat with zero rushing production added to his bottom line.

Nevertheless, don’t overlook Justin Herbert if you play multiple lineups, as Vikings-Chargers has all the ingredients to be a shootout, and Minnesota’s defense ranks fifth-worst versus QBs over the last four weeks.

In the Week 9 DFS cheat sheet, I wrote about Cousins’ advantage versus the Baltimore Ravens’ Cover 1 and 3 base defense. He posted a serviceable passing outing as a result — 20-plus fantasy points. Get ready to head straight back to the Cousins well this week, as the Los Angeles Chargers also run a lot of Cover 1 and 3 looks, so expect another efficient outing from Captain Kirk. Through nine weeks, the Vikings passer owns PFF’s third-highest grade (88.4) when facing those schemes.

Ryan is PFF’s highest-graded quarterback since Week 4 (91.7), so expect him to stay hot in a projected 55-point shootout versus the Dallas Cowboys.

Wentz has made my start column in each of the past two weeks and delivered with back-to-back three-touchdown performances. The Indianapolis Colts quarterback has now scored at least 17 fantasy points and thrown multiple touchdowns in six straight games.

He is firing on all cylinders and gets a plus matchup versus the Jacksonville Jaguars in Week 10. The Jaguars rank 31st in yards per attempt and 28th in passer rating faced.

Indianapolis also boasts the fourth-highest implied team total for the second straight week, which tends to be a solid predictor of fantasy success for quarterbacks. 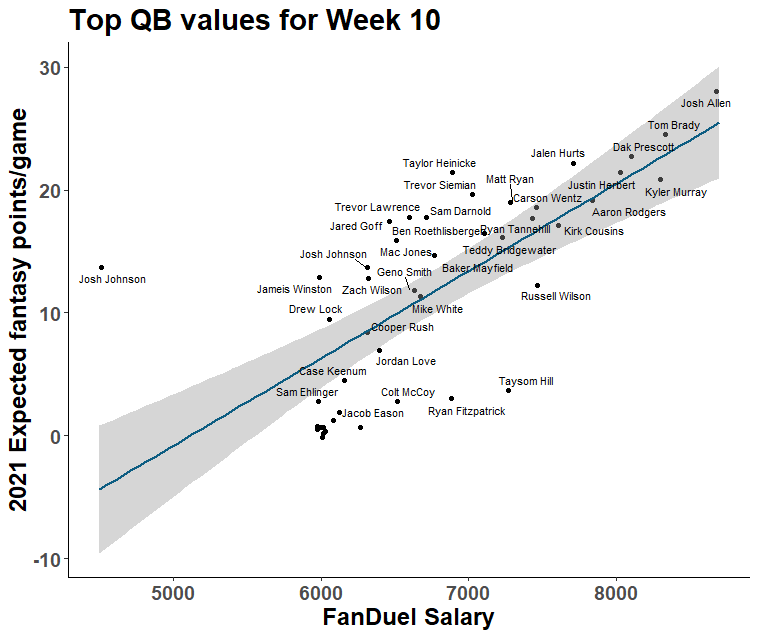