Just under a year ago, I wrote a piece on the fantasy winners and losers of the NFL draft. Pretty standard stuff, really. It wasn’t that hard to identify Jared Goff as a winner, Jeremy Hill as a loser. So, to keep it from being too banal, I tried to stretch my muscles a bit, and called Nelson Agholor a winner.

Today, a year on, I look all sorts of clever. Agholor had 644 receiving yards combined in his first two seasons in Philadelphia with 3 total touchdowns. In 2017 alone, he had 768 and 8. “Hey, fantasy guy, good call.”

Except here’s what I wrote:

“Okay, maybe this is a stretch, but Agholor was a first-round draft pick only two years ago. And now, with Alshon Jeffery, Torrey Smith, Mack Hollins, and Shelton Gibson added to him, Jordan Matthews, and Dorial Green-Beckham in the Philadelphia receiving corps, there isn’t roster space to go around. Maybe Agholor finds a fresh start elsewhere. And if there’s anything to Agholor’s one-time potential, it seems like he won’t be realizing it in Philadelphia. Tabula rasa FTW.”

Basically, I called Agholor a winner from the draft because I couldn’t envision a scenario where he remained in Philadelphia, and maybe he could be a success elsewhere.

Instead, Matthews and Green-Beckham are gone, Gibson had two catches as a rookie, Smith and Hollins couldn’t combine for 700 yards, and Agholor realized the theoretical potential people saw in him as a first-rounder in 2015.

Considering Agholor’s leaps in productivity from his rookie and sophomore seasons to 2017, it’s easy to cite increased usage as a reason. After all, he was targeted 108 times in 2017 (counting the playoffs) after only 105 total targets the two years before. That said, Agholor actually played a lower percentage of the Eagles’ snaps in 2017 (72.3) than he did in 2016 (82.3). This wasn’t a player who stayed at the same level of efficiency but saw his usage skyrocket. This was a player who suddenly became efficient.

There are many ways to illustrate Agholor’s Year 3 improvement. Here’s my favorite: 2006-present, there have been 2,280 player-seasons with at least 30 targets. Here is how Agholor ranked in yards per route run among those 2,280. 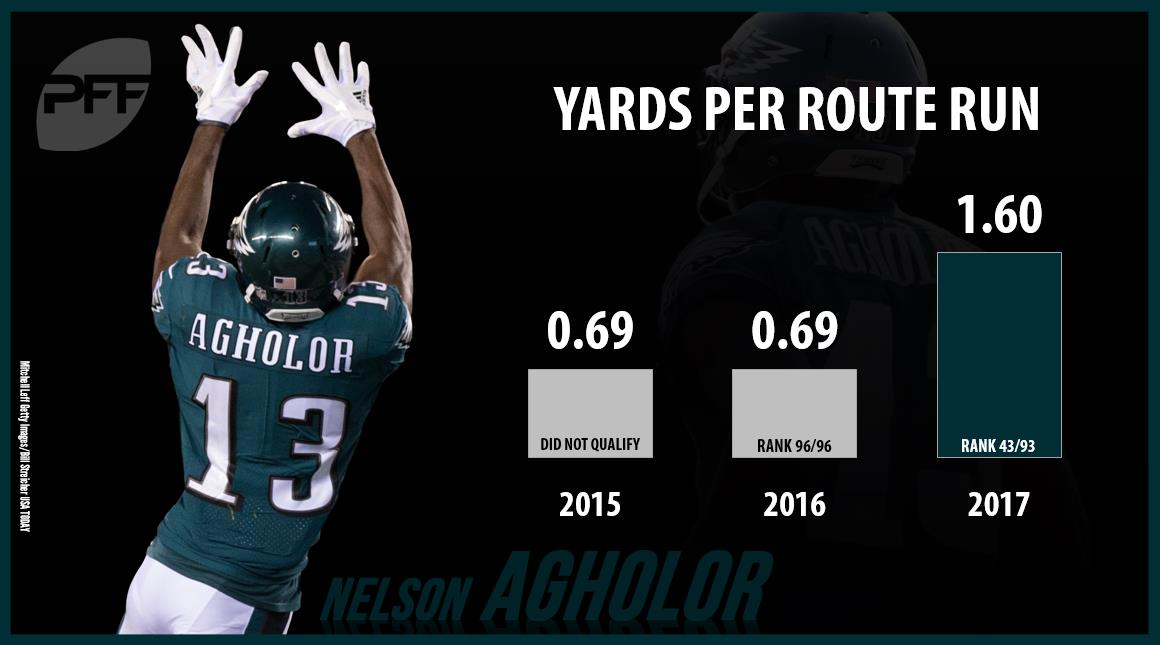 That improvement came alongside a big jump in Agholor’s slot usage. He ran 192 routes out of the slot in 2015 and 2016 combined, then 413 in 2017 alone. All 8 of his touchdowns and all but 16 of his receiving yards last season came on slot receptions.

What does it mean for 2018? Here’s where it gets interesting. The Eagles are likely to move on from Torrey Smith this offseason and go into 2018 with Alshon Jeffery as their No. 1 receiver and Agholor at No. 2, with Zach Ertz still obviously having a major role as the tight end. Last year, all three players had 700-plus receiving yards, but none reached 900 (Ertz 824, Jeffery 789, Agholor 768). That’s a balance not many teams have achieved — since 2007, only seven teams have managed it:

The next year, every single one of those teams (2017 editions excluded, obviously) saw the range in receiver production increase. In short, teams don’t maintain a tight range of successful receiver production (bad teams, putting up only a few hundred yards apiece for each receiver, can maintain that for a long time, because bad teams are bad). Only the 2007-2008 Texans had all three receivers top 600 yards in consecutive years.

So odds are against Ertz, Jeffery, and Agholor all putting up productive yardage numbers. And considering the established levels of all three, if pressed, you’d have to pick Agholor as the most likely to experience negative regression.

Agholor finished 2017 as the No. 22 fantasy receiver, tucked between huge names Mike Evans and Demaryius Thomas. Barring injury to Ertz and/or Jeffery, that’s probably the absolute ceiling for Agholor in 2018.

That said, he’s currently going as the No. 60 receiver in drafts, according to early ADP data, and that’s too low. Agholor became a more efficient receiver in 2017. That was real. He might not be set up for NFL superstardom, but he’s no longer a bust. You might even call him a winner, not a loser, during the 2017 offseason.