In fantasy football, volume matters much more than efficiency for running backs, wide receivers, and tight ends. This chart helps hammer that point home. Over the past decade, among all players with at least 250 snaps in a single season, raw targets had a 0.95 correlation to PPR fantasy points for wide receivers and that number sat at 0.96 for tight ends. Running backs saw a 0.87 correlation between raw touches and fantasy points.

(You can access our route data for wide receivers here, running backs here, and tight ends here, if you’re a PFF Elite subscriber.)

After spending some time looking at our route data, I wanted to highlight a few of my favorite metrics that I’ve found.

Over the past two seasons, Bell also averages 63.9 snaps per game, or about 11.8 more per game than the next-closest running back (Ezekiel Elliott). Basically, Bell is playing almost a full quarter per game more than the next-closest running back. The fact that there’s no competition for snaps within the backfield and that he’s used in all phases of the game helps keep his upside higher than almost any other player in fantasy and means gamescript can’t take him out of any game. 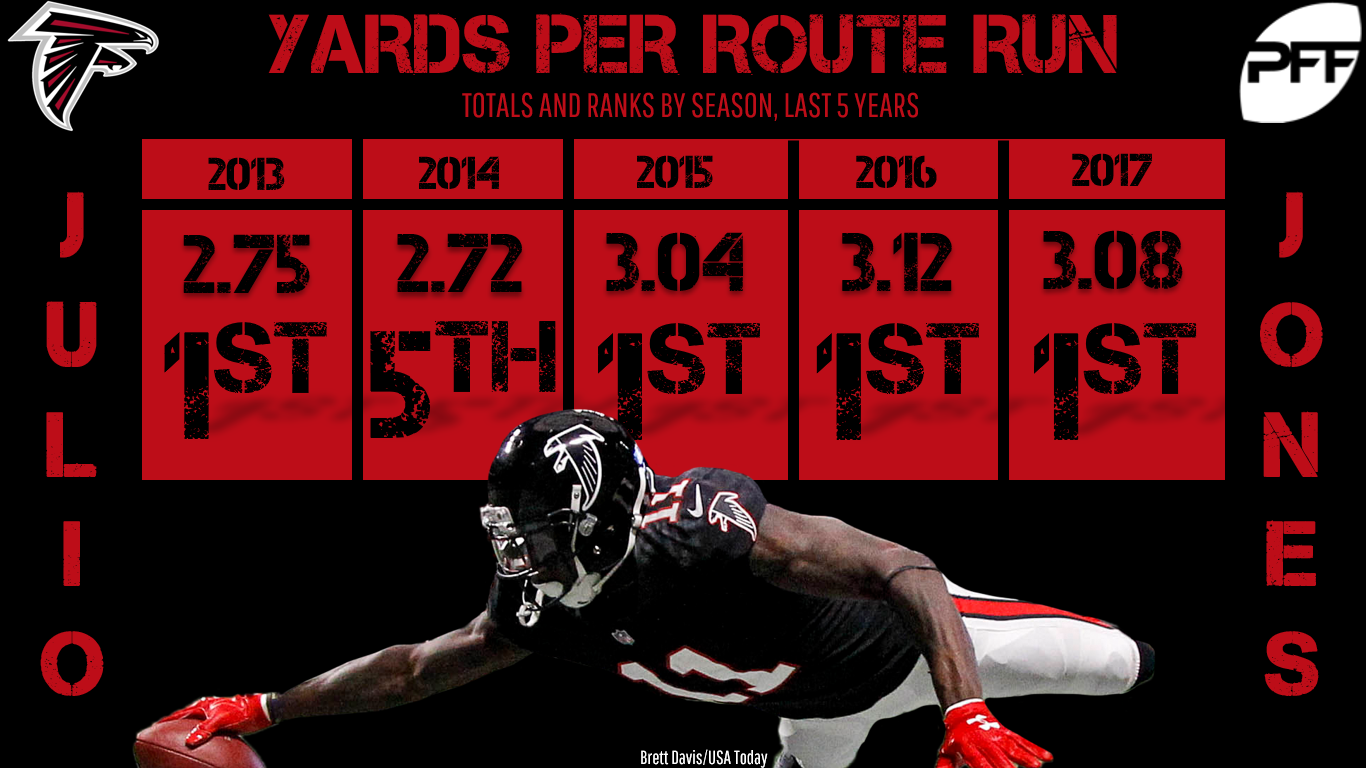 Jones is usually on everyone’s list of the top wide receivers in the league, but he is rarely No. 1, even though, statistically, he’s the most efficient wide receiver in the league on a per-route basis. However, he’s also somewhat at a detriment for fantasy, in that he runs a low number of routes per game. Specifically, Atlanta ranks 11th-lowest in dropbacks per game over the past three seasons, while Houston, Pittsburgh, and the Giants all rank higher. On top of that, he’s not playing a high percentage of his team’s snaps in any game. For instance, DeAndre Hopkins played on over 90 percent of his team’s snaps in every game he played last year. Jones never hit a 90-percent snap share last year and reached 80 percent of his team’s snaps in only seven of 16 games.

Over the past three seasons, Jones totals 871 more yards than Hopkins despite running 317 fewer routes. Jones averaged 6.0 fewer routes run per game than Hopkins over this stretch. Essentially, based on routes run, Hopkins is almost playing an extra full quarter per game when compared to Jones.

Last season there were 32 wide receivers to run at least 300 routes and draw a target on at least 20 percent of their routes. The teams to sport multiple wide receivers on this list were Atlanta (Jones and Mohamed Sanu), Denver (Demaryius Thomas and Emmanuel Sanders), LA Rams (Robert Woods and Cooper Kupp), Miami (Jarvis Landry and DeVante Parker), Minnesota (Adam Thielen and Stefon Diggs), and Oakland (Michael Crabtree and Amari Cooper).

Atlanta and the Rams ranked 11th- and seventh-lowest, respectively, in passing plays per game, which helped raise the rankings of their receivers here despite total targets not being especially high. All of Denver, Miami, and Minnesota will have a new quarterback under center, which muddies things here, as does Oakland having a new offensive play-caller (Jon Gruden). Interestingly, Thielen ranked 10th-best in targets percentage while Diggs ranked 24th, which might help justify the ADP disparity (11th to Diggs’ 16th), but it’s not a given that Kirk Cousins will prefer Thielen to the degree Case Keenum had. Although Sanders is likely still the WR2 on his team (behind Thomas in the pecking order), he shouldn’t be treated as such for fantasy. He’s ranked 22nd, ninth, and 13th in target percentage over the past three seasons.

Ricky Seals-Jones ran only 68 routes last year but drew 28 targets for 201 yards and three touchdowns on those routes.

It was an extremely small sample, but Seals-Jones was easily our most efficient tight end on a per-route basis last year. Bruce Arians’ offense wasn’t very conducive toward fantasy success at the tight end position, ranking last in targets and fantasy points among all teams over the past three years. With Jermaine Gresham recovering from an Achilles injury suffered in Week 17, Arizona beat writers are projecting Seals-Jones to enter camp as the starter and with an expanded role in the offense. In each of four seasons coached by Mike McCoy (now calling plays for the Cardinals), Antonio Gates totaled at least 85 targets. Seals-Jones is a strong ADP value, currently being drafted in the 15th round in MFL10s.