We’ve spent a lot of time within this series breaking down various metrics, what they mean, and how they can help you win your fantasy league, but today I wanted to focus on our player grades.

At PFF, we have a team of experts who spend roughly 20,000 man-hours grading every player, at every position, on every play, in every game during the season. You can read more about our grading process here. If you’re an Edge or Elite subscriber, you can access our 2017 season-long grades here. If you’re a skeptic, I implore you to watch this video from Dallas O-line coach Paul Alexander.

I try to watch as much football as I can during the season but, obviously, I don’t have 20,000 man-hours to spare, nor do I trust myself as much as our experts and our extremely thorough grading process. For fantasy football, our grades are especially useful in identifying breakout candidates or potentially undervalued sleepers before the rest of the fantasy world. For instance, I owned Doug Baldwin in all of my dynasty leagues heading into the 2015 season. He never finished inside of the top-50 wide receivers in fantasy points per game up to this point, but since then, he’s ranked top-16 in each of the past three seasons. Why was I so high on him? Despite the poor fantasy production to start his career, he’s ranked top-25 among wide receivers in PFF grade in every year of his career.

As an additional example, last season, I tried to acquire Adam Thielen in every league I didn’t already own him. I was high on him heading into the season, but after noticing Case Keenum graded out as our No. 8 quarterback across the first five weeks of the season (something I didn’t expect), I doubled down. I would also use our grades to predict regression (when a player’s fantasy production didn’t align with their grades), to decide which wide receiver to start in a given week (looking at the grade of the opposing cornerback), or whether I should cut a specific player after a poor fantasy start. 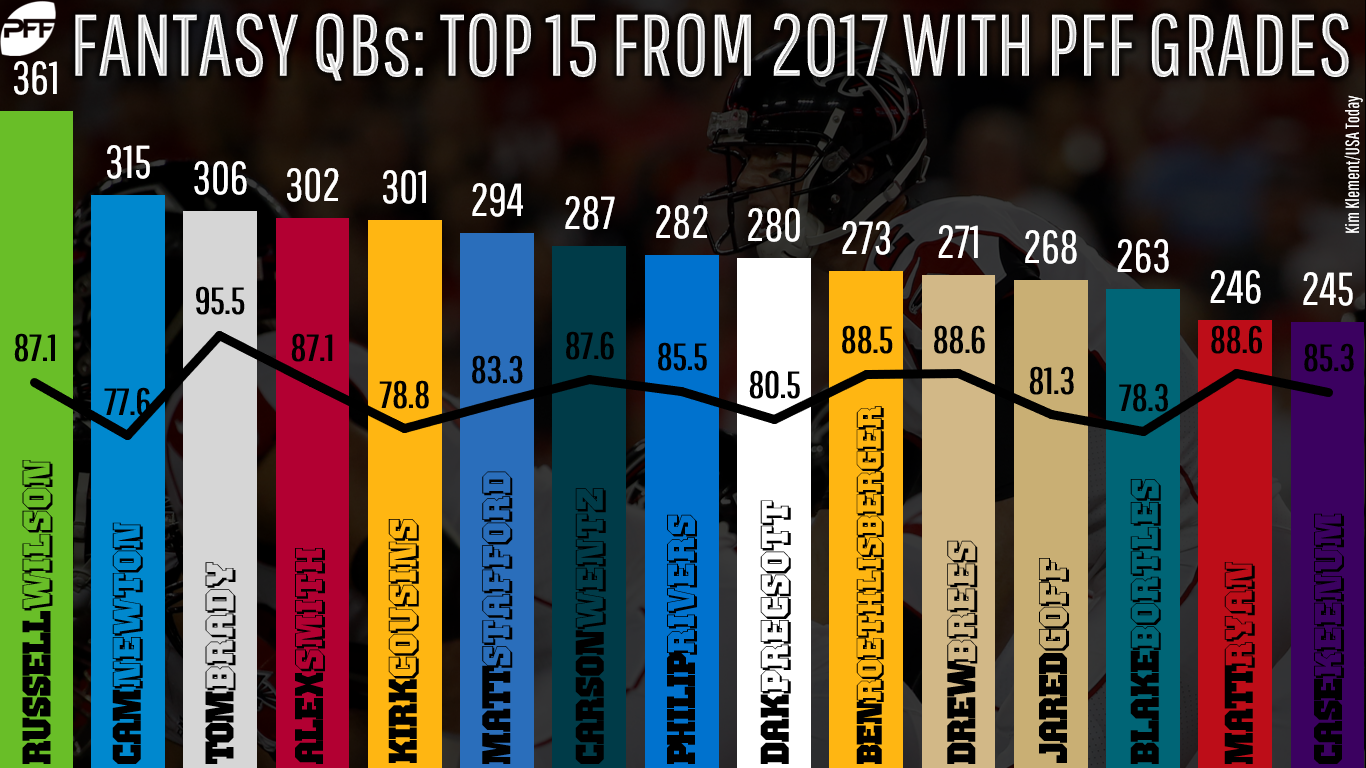 With the 2018 fantasy season in mind, here are some of the quarterback grades from 2017 that stood out the most to me:

In each of the past two seasons Ryan has finished second among quarterbacks (behind Tom Brady) in PFF grade. While our graders felt he played at nearly the same level last year as his 2016 MVP-winning season, the difference for fantasy was drastic. He averaged 25.7 fantasy points per game in 2016, but only 18.3 fantasy points per game last season. What changed for Ryan? Well, mostly, he was extremely unlucky. 34 of his passes were dropped last year, fourth-most among all quarterbacks. Ryan threw 12 interceptions last season but was credited with only five turnover-worthy throws — the largest differential of the past decade. His touchdown rate was 3.78 percent in 2017, compared to a prior-career average of 4.74 percent. For all of these reasons, Ryan is one of my top positive regression candidates and a strong fantasy value heading into the 2018 season. His current ADP is QB11, after finishing 14th and third in total fantasy points in each of the past two seasons.

Last season, Cousins ranked 19th among quarterbacks in PFF grade, which was just one spot ahead of Blake Bortles. Meanwhile, Alex Smith ranked sixth in PFF grade and Keenum ninth. While Cousins did rank eighth- and 11th-best in the two seasons prior, I’m curious if his low ranking last year might have played a role in Washington’s willingness to move on from the now-second-highest-paid player in the NFL. Over the past five seasons, Jay Gruden’s starting quarterback has ranked fourth, fifth, ninth, 32nd, and third in total fantasy points (there was a lot of turnover at the quarterback position in 2014). If Cousins is in fact the “system quarterback” some have implied, his ADP (QB8) would be a tad high, despite the upgrade in receiving talent in Minnesota. I’m not sure this is the case, but this does add into the risk of drafting him. Smith, meanwhile, feels like a stronger value with an ADP of QB20, after finishing fourth in fantasy points per game last year (23.2).

Watson set the fantasy world on fire last year. Through seven games, Watson averaged 25.0 fantasy points per game, which was the eighth-most by any quarterback all time. Still, he graded out only 30th-best at the position last year, implying his performance wasn’t as strong as his fantasy stats seem to imply. The small sample size (seven career NFL games) in and of itself is also concern, but so is his extremely high touchdown rate. As I outlined here (explaining why I’m avoiding him at ADP), he averaged a touchdown pass on 9.31 percent of his attempts, which was the second-best rate among all 1,464 quarterbacks to attempt at least 200 passes since the NFL merger (1970). As we explained in the article, outlier-ish touchdown rates almost always regress to the mean, and especially among non-hall-of-fame quarterbacks. By current ADP, he’s routinely being selected as the second quarterback off the board, which, compared to my ranking for him (QB7), is more than a touch too high.

Speaking of small sample sizes, I think it’s worth noting that Mahomes was our highest-graded quarterback last preseason and ranked fifth-best as a passer in his only career start (Week 17). I’m not willing to read too much into this, but it is cause for some optimism, and especially given the team’s willingness to part ways with Alex Smith after a career year. Mahomes also sports one of the strongest supporting casts in all of fantasy. Garoppolo also found success on a small sample. He ranked 10th in PFF grade across six games and led the league in yards per pass attempt (8.8). As I outlined here, given the success of Kyle Shanahan’s previous quarterbacks for fantasy, he’s an obvious breakout candidate in 2018.