Metrics that Matter: Is Golden Tate among the league's elite WRs?

In our last article, we highlighted Travis Kelce and how effective he is at creating yards on his own once the ball is in his hands. Over the past two seasons, he leads all tight ends in yards after the catch (by 479) and in missed tackles forced (by three).

I wanted to do something similar in this article but focusing on the wide receiver position – looking at the league leader (Golden Tate) and examining how this translates for fantasy football. So, I went over to our Premium Statistics landing page and then clicked on the wide receiver tab, which took me to a page that looks like this:

This data is available to all PFF Elite subscribers.

The wide receivers on this chart are sorted by raw PFF grade and the complete list accounts for all wide receivers to play at least one offensive snap. This page allows you to sort by any of the listed statistics, but our focus today will be on yards after the catch and missed tackles forced on receptions.

Last year’s league leader, in both categories, was Tate – also our No. 7-graded wide receiver. Last year, he led in yards after contact by 108 and in missed tackles forced on receptions by five. He ranks top-five in yards after contact in each of the past four seasons and top-three in missed tackles forced in each of the past six seasons.

The more yards in air a receiver draws, the more likely they are to rank highly in total receiving yards. Slot wide receivers, working underneath, typically amass fewer yards in air and fewer total yards than their outside counterparts. Among all receivers, Tate ranks just 33rd in receiving yards per game over the past five seasons. This seems underwhelming, but looks far better when realizing Tate also ranks 94th in yards in the air per game.

Tate ran 79 percent of his routes from the slot last season and drew an average depth of target of 6.7 yards, which ranked 49th of 51 wide receivers to see at least 75 targets. Rather than comparing Tate to outside wide receivers, we should compare him to slot wide receivers or wide receivers with a similar (low-aDOT) role. Another effective method of highlighting his dominance is by contrasting yards in air on completions with yards after the catch. JJ Zachariason did this here:

Two things make up yards per reception: air yards and yards after the catch on the completed pass. Here's every 30+ target WR charted by YAC (x-axis) vs. air yards on receptions (y-axis). It's cluttered, but wanted names in there at the extremes. pic.twitter.com/sJqwjL6ZGI

Tate clearly stands out here, highlighting just how good he is at what he’s asked to do. For all of the reasons highlighted above, I think he should be viewed alongside the other elite wide receivers in the NFL. Where Tyreek Hill is an elite deep threat and Antonio Brown is elite at everything, Tate is an elite underneath option. Relative to his peers serving in a similar role, Tate truly does appear elite. 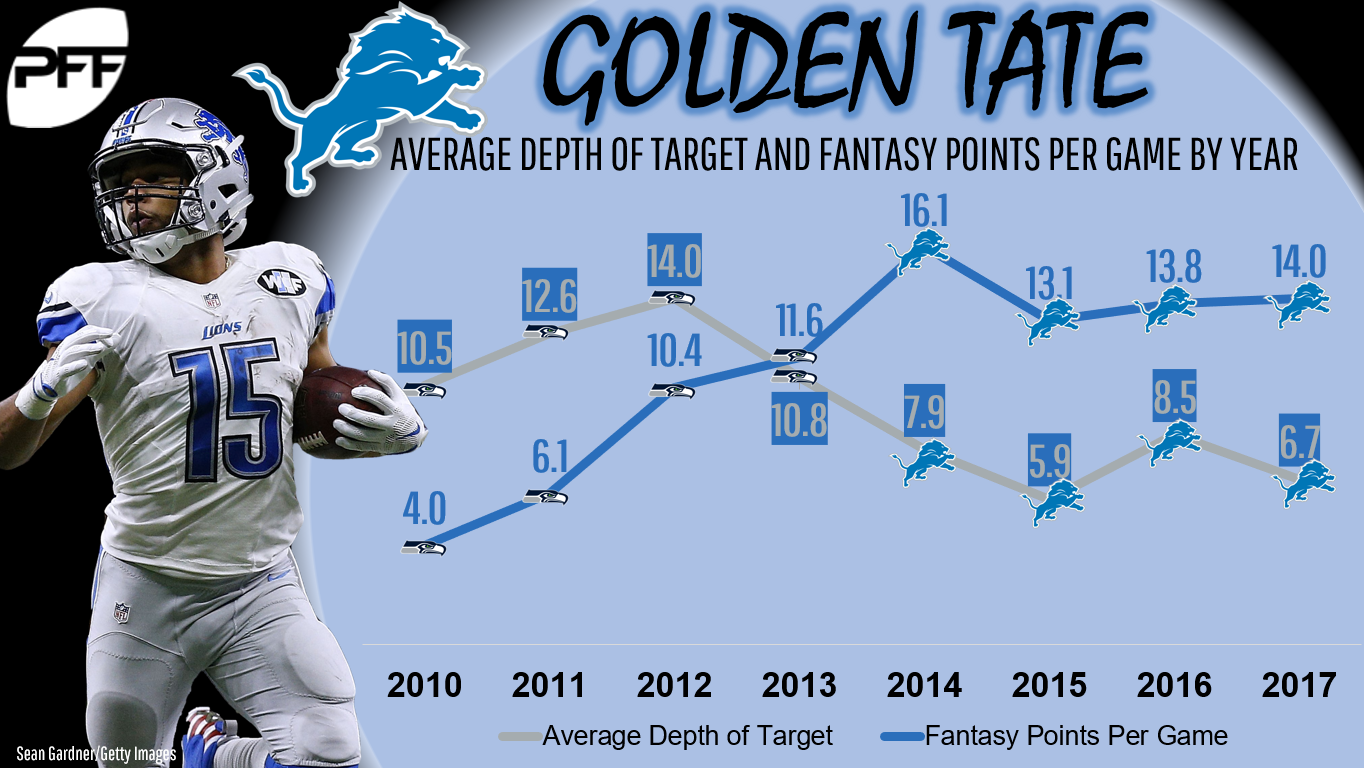 Tate will continue to be what he’s always been for fantasy: A very safe and dependable fantasy option in the high-end WR2-range. Although he won’t rank highly in total yards due to his role, he will continue to rack up a high number of receptions (he ranks top-10 in receptions in each of the past four seasons) which are massively valuable for PPR leagues. Tate has finished 12th (2017), 17th, 23rd, and 11th among wide receivers in PPR over the past four seasons. In PPR fantasy points per game, he’s finished 15th, 19th, 27th, and 12th. Not only was he extremely productive, but he was also incredibly consistent, finishing tied with the third-most WR1 weeks and fifth-most WR2 weeks last season. His current PPR ADP places him at WR24, which means he’s an extremely strong value, priced below his most recent floor.

As an interesting aside, I noticed something peculiar when digging deep into these numbers. Albert Wilson is the only receiver to average more missed tackles forced per reception than Tate since 2014 (when Wilson joined the league). He’ll be fighting with DeVante Parker and Kenny Stills for outside work this year in Miami and will also be competing with Danny Amendola for slot duties (where Wilson ran 68 percent of his routes over the past two seasons). Wilson earned a longer contract worth more money per year than Amendola, so he’s likely the favorite there, and, of course, these numbers and the value of the role while Jarvis Landry was there are definitely encouraging for his 2018 fantasy prospects.