Wild Card weekend means another opportunity to play some fantasy football. We have playoff fantasy football leagues, DFS, salary cap formats, and one-and-done contests. Regardless of which format you’re in, we have you covered here at PFF. Like we do every week on the Focus, we’re breaking down every game from all fantasy angles below. And for the playoffs, we included a special section on the best one-and-done plays for each game.

Matchup upgrade: Opposing passing games have picked on the Houston secondary all season, and for good reason. The Texans are starting a 35-year-old Johnathan Joseph, who allowed 13.1 yards per catch this season. Along with Joseph, there’s Tampa castoff Vernon Hargeaves and Gareon Conley, whom they acquired via trade from the Raiders midseason. The duo of Hargreaves and Conley have allowed a massive 11 touchdowns combined in their coverage. With the secondary in mind, it’s hard not to like John Brown and Cole Beasley here. Likewise, the Texans allowed the fourth-most fantasy points per game to quarterbacks in 2019, so upgrade Josh Allen.

Devin Singletary is also appealing in this matchup. After opening the season with a committee of Singletary and Frank Gore, the Bills took the training wheels off Singletary back in Week 9. From that point on, he ranked ninth in the league in rushing attempts with an average of 16.5 per game. Look for the Bills to lean on Singletary in this one. He’s a good bet for 20-plus touches and gets the No. 4 fantasy matchup for running backs.

Matchup downgrade: Buffalo doesn’t shadow every week with Tre’Davious White, but we fully expect them to this week with DeAndre Hopkins on the other side of the field. Sure, that’s no pushover of a matchup for Hopkins. White didn’t allow a single touchdown in his coverage this season. But Hopkins isn’t an ordinary receiver. He tied for the fifth-most targets in the regular season, averaging a healthy 9.6 per game. Regardless of the coverage, he’s going to see ample targets this week. So we should downgrade him, but only slightly.

Likewise, Deshaun Watson runs into a tough matchup in this contest. The Bills are the third-worst matchup for quarterbacks with opposing signal-callers averaging just 6.2 yards per attempt. Buffalo is also one of just three defenses to allow under 1.0 passing scores per game. But like Hopkins, we’re only slightly downgrading Watson. Let’s not forget that Watson went into New England and put up a big fantasy performance in Week 13.

Buffalo’s defense has also done a very good job of holding opposing tight ends in check and enter the week as the second-worst matchup for the position. The Texans love to use the tight end, but Jordan Akins and Darren Fells have been tough to predict with each cannibalizing off the other throughout the season. Given the matchup and volatile workloads, it’s a good idea to fade both this week.

Key injuries: Will Fuller’s status is far from clear for this contest. The Texans wideout is dealing with a groin injury and has only gotten limited work in at practice this week.

Best one-and-done plays: You really need to take a stand on who you think will win this contest before you decide on your one-and-done roster this week. If you think the result follows the spread, then it’s a good idea to load up on Bills. Allen is arguably the top one-and-done quarterback on the board this week. He pairs well with Brown for stacking upside. Likewise, Singletary’s matchup and potential workload make him a very appealing running back play in one-and-done contests.

Matchup upgrade: You aren’t going to find many upgrades in this contest, but the one exception might be for the New England backfield. Tennessee allowed the 11th-most fantasy points per game to opposing running backs in the regular season with backfields averaging 0.8 rushing scores per game against the Titans. While this is far from a slam dunk matchup, both Sony Michel and James White have appeal in this contest.

Matchup downgrade: It’s no secret that the Patriots excel on the defensive side of the football. Expect Bill Belichick’s defense to prioritize stopping Derrick Henry in this contest. The Pats are the worst fantasy matchup for running backs, with just 0.3 rushing scores per game allowed to the position. It’s going to be tough sledding for Henry in this one. 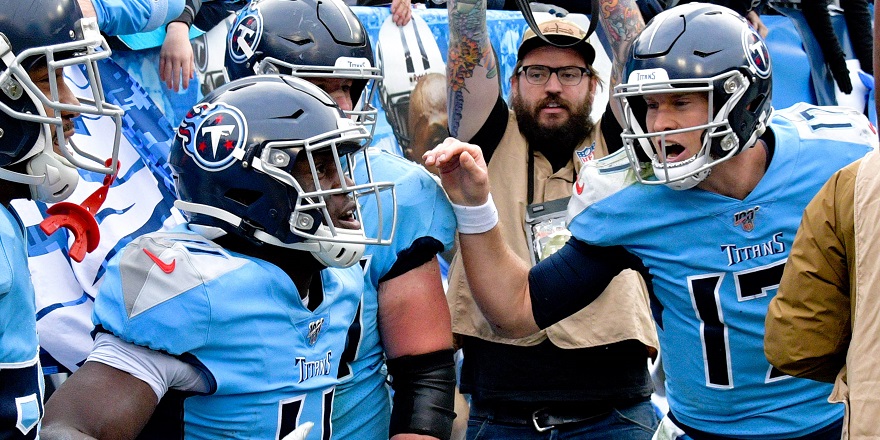 Likewise, Ryan Tannehill gets a brutal draw here. The Pats are also the worst fantasy matchup for quarterbacks. New England is one of just two defenses to allowed fewer than 200 net passing yards per game. Not only that, but the Patriots also know Tannehill quite well from his time with the Dolphins. Tannhill is a fade candidate in all fantasy formats.

However, the same cannot be said for A.J. Brown. Is the matchup difficult? Yes, but be careful with this one. There’s a widespread assumption that he’ll see a shadow from Stephon Gilmore. That’s far from a lock as the Pats have often used Gilmore to shadow the bigger-bodied receiver in the past. Gilmore tracked Corey Davis when these two teams played in Week 10 of last season. Of course, that was a Titans roster without Brown and the rookie wideout has shown how dangerous he can be over the last month. Regardless of who he sees in coverage, Brown comes with significant upside. And let’s not forget that DeVante Parker showed last week that Gilmore is far from an unbeatable matchup.

Key injuries: Julian Edelman remains banged up with both knee and shoulder injuries. The veteran receiver is practicing, though, and should be a big part of what the Pats do this weekend.

Best one-and-done plays: It’s tough to like most of the Titans offense in this one with the one exception of Brown. His massive ceiling and recent hot streak make him an appealing one-and-done option. While it typically makes sense to load up on players who you think will lose, it isn’t out of the question to use Michel here. With so few potential good matchups going forward, it’s worth considering striking while the iron is hot.

Matchup upgrade: The good times just continue to roll for Michael Thomas. The Saints wideout notched his name in the record books during the regular season and is arguably the top fantasy play on the board this week in DFS. Thomas will have no problem in this matchup, especially when he sees Xavier Rhodes. The Vikings corner allowed a whopping 84.3% of his targets to be caught in the regular season. Those looking for high-ceiling wideouts may want to consider Ted Ginn and Tre’Quan Smith.

Matchup downgrade: With Adam Thielen just not looking like himself since his midseason injury, expect the Saints to prioritize Stefon Diggs and shadow him with Marshon Lattimore. After a somewhat rough start to the season, Lattimore steadied the ship and did a very good job of containing opposing receivers. Since Week 4, Lattimore is allowing a 42% catch rate at just 11.7 yards per catch and one touchdown surrendered. While Diggs certainly comes with major big-play ability, this is a rough matchup for the Vikings receiver.

It’s also a suboptimal draw for Dalvin Cook, who will return to the lineup after missing the last two games due to injury. New Orleans has fared well against the run this season and enter the week allowing just 3.7 yards per carry to opposing backs. It’s tough to count out Cook, especially after he saw a league-leading 21 goal-line carries in the regular season, but don’t be surprised if the Saints keep him in check in this one.

While the Vikings do struggle against wide receivers, they’ve had no problem against tight ends. Minnesota has allowed just one receiving touchdown to the position this season. It isn’t the week to use Jared Cook, but we’ll have better opportunities ahead with the Saints currently sitting as the biggest favorites on the board for the weekend.

Key injuries: With Cook and Alexander Mattison trending toward playing, both teams look like they’ll be at full strength for this one.

Best one-and-done plays: Given the expected outcome, out best bet is to load up on Vikings. Diggs is certainly in play, given his massive ceiling. Likewise, Cook is also an option. Even in a tough matchup, he figures to a heavy workload. That said, Kirk Cousins isn’t particularly appealing. There are better quarterback plays on the board this week. Even if you have the Saints winning, it might be worth taking a stab at Smith or Ginn, but keep in mind that both are only going to reach value if they find the end zone. They’re better DFS plays than they are for one-and-done contests. 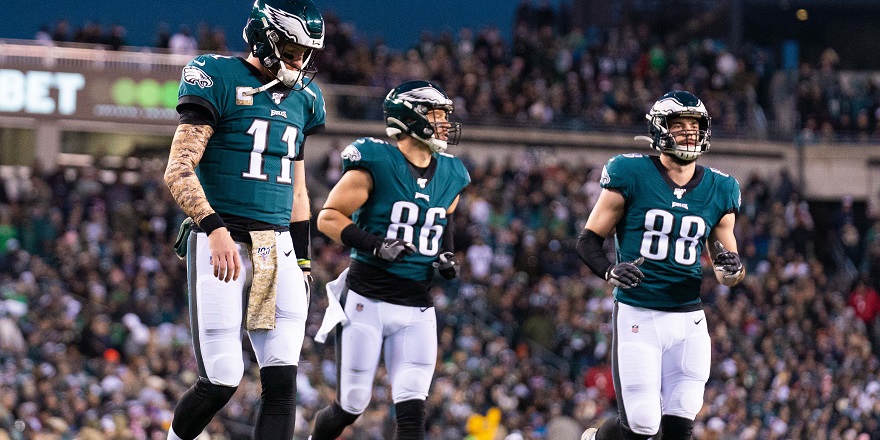 Matchup upgrade: This is a phenomenal matchup for the Eagles tight ends, with the Seahawks allowing the second-most fantasy points per game to tight ends in the regular season. Zach Ertz has yet to be cleared for contact and is very much up in the air for this one. If he doesn’t suit up, expect to see a ton of Dallas Goedert. The young tight end has topped double-digit targets in each of the last two weeks and figures to be heavily involved yet again. Even if Ertz plays, Goedert is one of the top DFS options of the week.

Don’t be fooled by the box score from the previous meeting between these two. D.K. Metcalf and Tyler Lockett combined for just four catches in that contest with neither player producing appealing fantasy numbers. But their lack of production was more the product of the weather than it was the product of the Eagles’ defense. Philly struggles against speed, which means advantage Metcalf and Lockett.

Matchup downgrade: With Seattle losing all three of their running backs to injury over the last month, the Seahawks will trot out the not-so-dynamic duo of Travis Homer and Marshawn Lynch. Last week Homer performed admirably given the circumstances, and Lynch did find the end zone. However, neither was a fantasy standout. Expect similar results against a tough Philly run defense that allowed the seventh-fewest fantasy points per game to running backs in the regular season.

Like the Vikings, Philly’s struggles against the pass are largely limited to wide receivers. The Eagles surrendered the fourth-fewest fantasy points per game to tight ends in 2019. That means it’s a good idea to fade Jacob Hollister.

Key injuries: In addition to Ertz, the Eagles are also dealing with a banged-up Miles Sanders, who hurt his ankle in last week’s regular season finale. The injury is being called a low-grade low ankle sprain, but Sanders missed practice on Wednesday. If he’s unable to go, Philly will be left with Jordan Howard, who has been slow to return from a stinger, and local cult hero Boston Scott. While Scott has performed well down the stretch, he doesn’t quite profile as an early-down replacement for Sanders. Don’t simply assume it’s a one-for-one swap with Sanders and Scott.

Best one-and-done plays: Like the first game on the slate, we need to pick our poison here and go after players on the team we think will lose. Given the odds, that means loading up on the Eagles. Goedert is one of the top plays here, especially if Ertz sits. We should also be eying up Carson Wentz if you want to pivot off Josh Allen. Greg Ward would be a solid secondary stack, as he draws a reasonably favorable matchup out of the slot against Ugo Amadi. It’s also wise to get a piece of the Eagles backfield with either Scott or Sanders depending on the latter’s injury status.