Frank Gore, the 'According to Jim' of fantasy football

MIAMI GARDENS, FL - DECEMBER 27: Frank Gore #23 of the Indianapolis Colts rushes for a 37-yard touchdown during the first quarter of the game against the Miami Dolphins at Sun Life Stadium on December 27, 2015 in Miami Gardens, Florida. (Photo by Rob Foldy/Getty Images)

(“Today’s Crazy Fantasy Stat” is an occasional offseason offering from PFF that highlights something that catches our eye and aids in our preparation for the 2017 fantasy season.)

The Drew Carey Show. According to Jim. Rules of Engagement. 2 Broke Girls. I’m willing to bet that if I asked you how many years each of those sitcoms ran, you’d go under the actual number on all four.

When a show like Friends or How I Met Your Mother lingers on for a bunch of years, it’s like Drew Brees — it’s good, and people know it, and it’s not going anywhere. You never just forgot Friends was on. But when those other shows went on … and on … and on, you’d be forgiven if you forgot about them. And here’s the thing: They were moneymakers. They didn’t take a third-tier network to No. 1, but they were the right combination of cheap enough to make and just barely garnering enough attention that their networks decided to keep them around.

Frank Gore is the According to Jim of fantasy football.

In 2005, Gore debuted with the 49ers and roughly split carries with Kevan Barlow (first time you’ve read his name in a while, I’ll bet). Gore was the better of the two, averaging 4.8 yards per carry to Barlow’s 3.3, while each had three touchdowns. Gore wasn’t really a fantasy factor that year, though. The next year, Gore had his best fantasy season, finishing fourth in fantasy points at the position with 1,695 rushing yards, 485 receiving yards (both career bests), and nine total touchdowns.

And he hasn’t not been a fantasy starter since.

The chart below shows every player currently working on a streak of three or more straight years as a fantasy starter, sorted by the year:

Obviously, that chart skews old — young players haven’t been around long enough to have streaks that long. But consider the names that don’t have long streaks. Tom Brady. Adrian Peterson. Rob Gronkowski. Larry Fitzgerald. They all have good reasons for their absences, of course, but that’s kind of the point — it’s hard to have everything break right for you to linger as a fantasy starter, year after year after year.

Brees seems a reasonable bet to continue his streak in 2017. Matt Forte seems safe to fall off. Gore? Gore’s tough to tell. The Colts didn’t make finding a replacement a priority of the offseason, passing up on names like Dalvin Cook and Joe Mixon to add defensive help in the first round of the draft. But they didn’t eschew the position either, bringing back Robert Turbin in free agency, drafting Marlon Mack out of South Florida late in the fourth, signing Christine Michael in free agency. 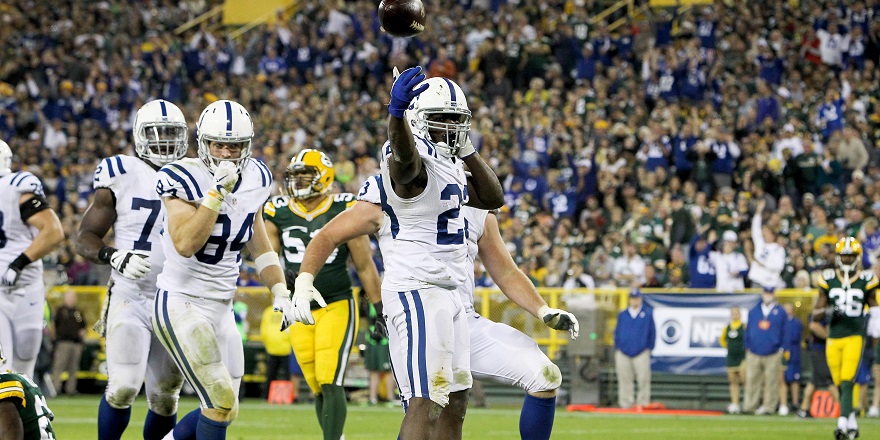 Gore will likely enter the 2017 season as the Indianapolis starter, and that’s honestly the highest praise he had entering 2015 and 2016 as well. But if Gore can continue to plod along, hold off Michael, hold off Mack, hold off Turbin for a big chunk of 2017 as well, he could be a low-teens fantasy finisher again, and it won’t be exciting, but that’s a back-end starter in most leagues.

Per Fantasy Football Calculator, Gore’s current ADP is 81st overall, the 35th running back off the board. And while that’s not terrible — you’re often drafting for upside more than stability, and Gore doesn’t offer much of that — he’s going in the same range as guys like Rob Kelley, Jeremy Hill, Jamaal Charles, guys who similarly lack upside but don’t have the floor Gore does. Assuming I wait on quarterback and tight end and load up on receivers and a stud running back early, I wouldn’t have any qualms reaching a round or so on the theoretical stability Gore provides, even entering the season as a 34-year-old. Get Gore there, draft some serious upside plays later.

It won’t be exciting, but then Gore rarely has been. But heck, someone had to be watching According to Jim all those years.