The Fantasy Focus is a weekly column that breaks down everything you need to know to set your fantasy football lineups. Make your start and sit decisions with fantasy facts, injury information, matchups stats, predictions for the week and more.

The No. 1 enemy of fantasy football players is overthinking. Heading into this weekend with the fantasy semifinals on the line, take a step back from your fantasy lineups. Sure, you could tinker with things a thousand times and research every possible angle. But your initial lineup is typically your best lineup.

Like we said last week, don’t get cute. Start your best players and you’ll give yourself the best possible change of winning. 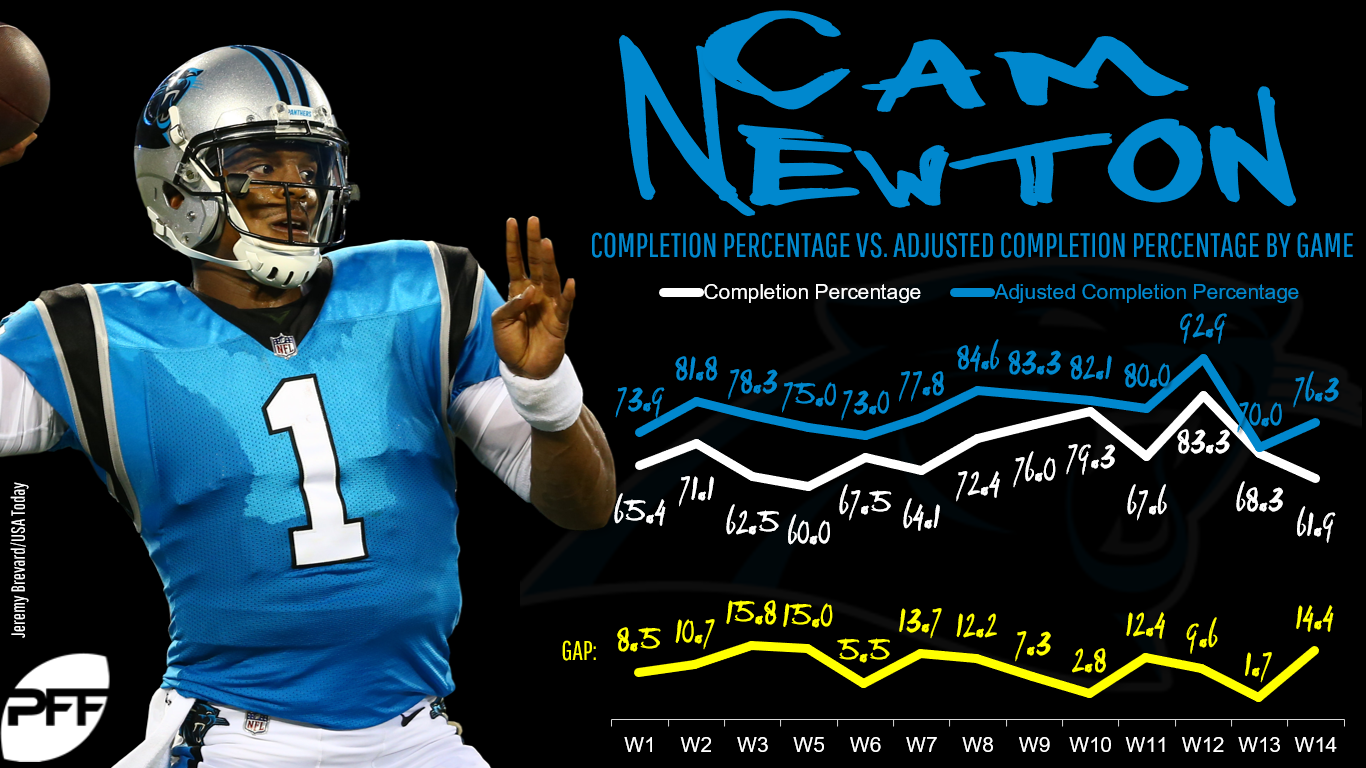 We know that injuries are no laughing matter in the NFL, but be careful how much weight you put into injury information. Cam Newton is dealing with a shoulder injury, but he’s expected to play Monday night. Many fantasy owners are worried about Newton following last week’s subpar outing. But his lackluster numbers weren’t just on him. Newton had three key drops from his receivers, with two of them coming from Curtis Samuel. It isn’t advisable to get cute this week and sit Newton for one of the streamer options.

Ben Roethlisberger is dealing with a rib injury, but he’s practicing in full and will play in Week 15. While it’s risky to start Roethlisberger given the fact that the injury briefly knocked him out of last week’s contest, the ends justify the means this week. Roethlisberger could be one of this week’s biggest quarterback plays if he manages to play the whole game.

Roethlisberger’s teammate James Conner has yet to return to practice, but Steelers OC Randy Fitchner said he could play without practicing. While that’s typically a stretch for most players, the possibility is now on the table. Of course, this further muddies the waters for Jaylen Samuels’ fantasy prospects this week as well. With this being a 4:25 p.m. ET start, Conner and Samuels owners will need to have a backup plan in place.

More injury notes: A surprise inactive last week, Odell Beckham Jr. won’t be a surprise this week — he’s been ruled out. … Matt Breida has managed to get limited work in at practice this week, opening up the possibility that he’ll return to play. While we wouldn’t expect a full workload for Breida, his presence on the field would essentially take Jeff Wilson Jr. off the table as a viable fantasy option. … Austin Hooper is now looking very iffy after missing both Falcons’ practices this week. … The Jets placed Isaiah Crowell on IR, which puts Elijah McGuire in the lead back role. McGuire is a desperation flex play. … LeSean McCoy managed to get limited work in on Thursday and could play this weekend. If he manages to suit up, McCoy is an extremely volatile flex option. … Keep an eye on T.Y. Hilton’s status, as the Colts wideout has yet to practice this week. It’s probably nothing, but fantasy owners will want to proceed with caution. … Look for Vernon Davis to assume the lead tight end duties for the Redskins this week, as Jordan Reed is trending toward not playing. Davis is a sneaky back-end TE1. 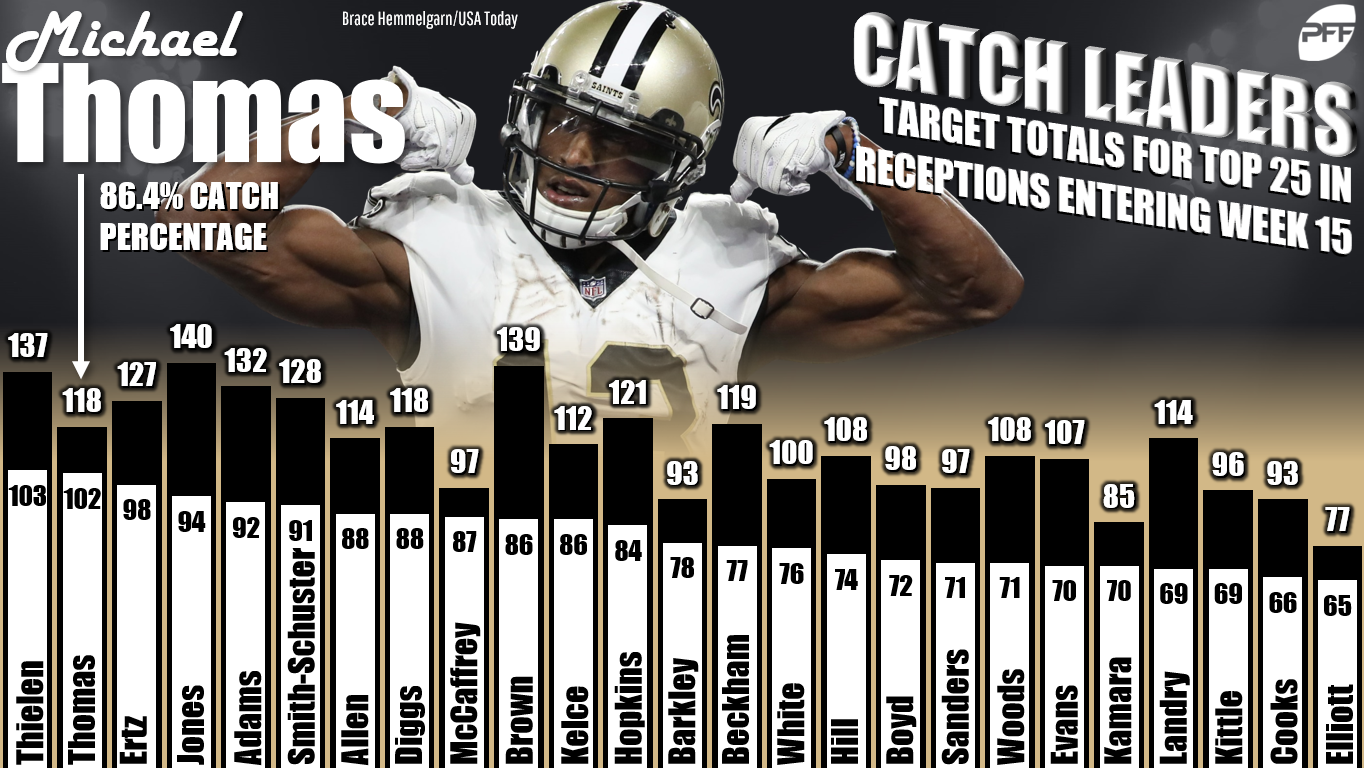 Entering Week 15, Michael Thomas is second in the NFL with 102 catches. Remarkably, he’s done that on just 118 targets. Thomas’ outstanding efficiency and heavy involvement in the Saints offense bode well this week with a plus matchup on tap against James Bradberry. The Panthers corner has struggled for much of the season and is allowing a receiver friendly 14.2 yards per catch in his coverage.

Brandin Cooks steamrolled through November with three straight 100-yard performances. But the Rams wide receiver has disappointed with just 84 combined receiving yards in his two December outings. However, good things are ahead for Cooks in Week 15. He gets to face a decimated Eagles secondary that just got torched by Amari Cooper and has allowed three receiving scores to wideouts in two of their last four games.

With A.J. Green out for the season, Tyler Boyd has emerged as the Bengals de facto No. 1 wideout. Fantasy owners are going to want to fire him up this week as a WR2 play against the Raiders. Boyd will face Nick Nelson out of the slot, which presents a big-time advantage. On the season, Nelson is allowing a 70% catch rate with 14.0 yards per catch in his coverage. He’s also surrendered two touchdowns on just 16 catches in his coverage.

Jarvis Landry showed last week that he’s still a viable WR2 fantasy option after the veteran posted two scores against the Panthers. Landry makes for a top-20 play this week in a potential high-volume situation against Broncos DB Justin Simmons. The hybrid safety has been extremely fantasy-friendly to opposing wideouts with 40 catches allowed on 48 targets in his coverage. 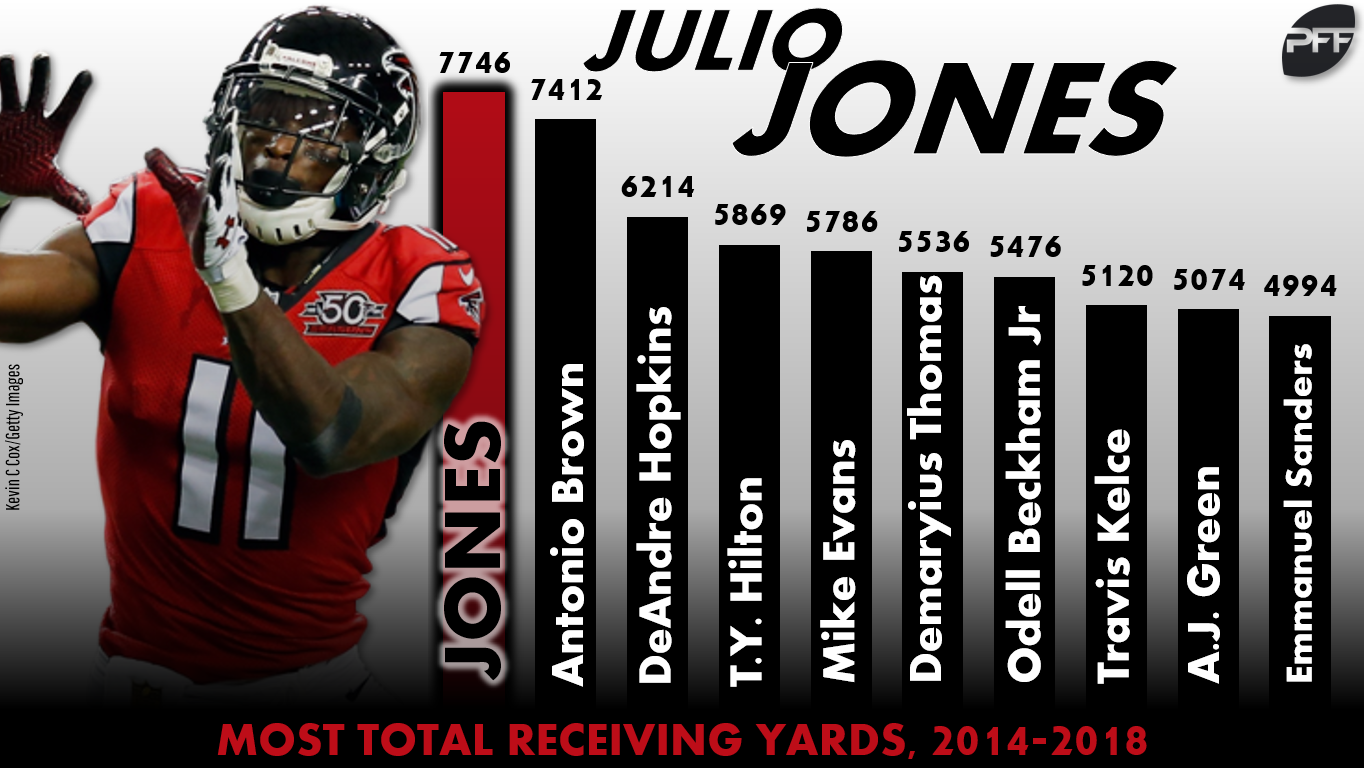 Sure, he doesn’t find the end zone as much as some of his peers, but Julio Jones is in the midst of a fantastic season. He leads the league with over 1,400 receiving yards and currently sits fifth among wideouts in fantasy scoring. Of course, Patrick Peterson isn’t the matchup you want to see for Jones this week. Peterson shut down Kenny Golladay last week and is seeing just 3.5 targets per game in his coverage. Jones is a must-start in fantasy every week, but don’t be shocked if he has a down performance.

Unlike Jones, Antonio Brown has had no trouble scoring touchdowns this season. The Steelers wideout is tied for the league lead with 12 receiving scores. Of course, Brown is a threat to go off every week, but he gets a tough draw in this one with shadow coverage projected to come from Stephon Gilmore. The veteran broke out this season and currently allowing a stingy 47% catch rate.

Look for Josh Gordon to see his share of Joe Haden in Sunday’s marquee matchup between the Patriots and Steelers. Haden hasn’t shadowed every week, but the Steelers have used him to track opposing No. 1 receivers in obvious shadow situations. Wideouts have been somewhat quiet in Haden’s coverage with a 59% catch rate and just 10.7 yards per catch.

Last week was ugly for Kenny Golladay owners, as the Lions wideout caught just two balls for five yards. Things don’t look much better for Golladay this week, as he projects to see shadow coverage from Tre’Davious White. The Bills corner has stood out this season, allowing 22 catches on 41 targets. That’s an average just 3.2 targets per game in his coverage.

Sure, this wasn’t the season you had hoped for out of David Johnson, but the Cardinals back hasn’t been a disaster. He enters this week 10th among running backs in fantasy scoring and leads all players in team touch share. Better yet, Johnson draws a plus matchup against a Falcons defense that allows the third-most fantasy points per game to running backs with backs finding pay-dirt on the ground against the Cards in seven of their last 10 games.

Can you trust Tevin Coleman this week? Well, trust is a big word in fantasy, but you can start Coleman as an RB2. The Cardinals have consistently gotten torched by opposing running backs with five scores allowed over the last three weeks and a league-high 1,618 yards allowed to the position this season.

Don’t expect Derrick Henry to repeat last week’s historic performance, but he is in play as an RB2 option. Henry faces a Giants defense that has struggled for much of the season against the run with opposing backfields topping 100 yards on the ground in five of their last six games.

Yes, the matchup for Aaron Jones isn’t pretty. Chicago has been a bear of an opponent for opposing running backs this season with just three rushing scores and the third-fewest fantasy points per game allowed to the position. But don’t overvalue the matchup in your decision-making process this week. Jones still should be started as an RB2 option.

With the Ravens committing to Lamar Jackson at quarterback this week, fantasy owners can breathe a collective sigh of relief. This is a fantastic matchup for Jackson against a Bucs defense that tends to struggle against the run. Tampa Bay has allowed opposing backfields to top 100 rushing yards in each of their last four games. While Jackson isn’t a running back, he is the league’s most dynamic running quarterback. He’s also a top-12 fantasy play this week. 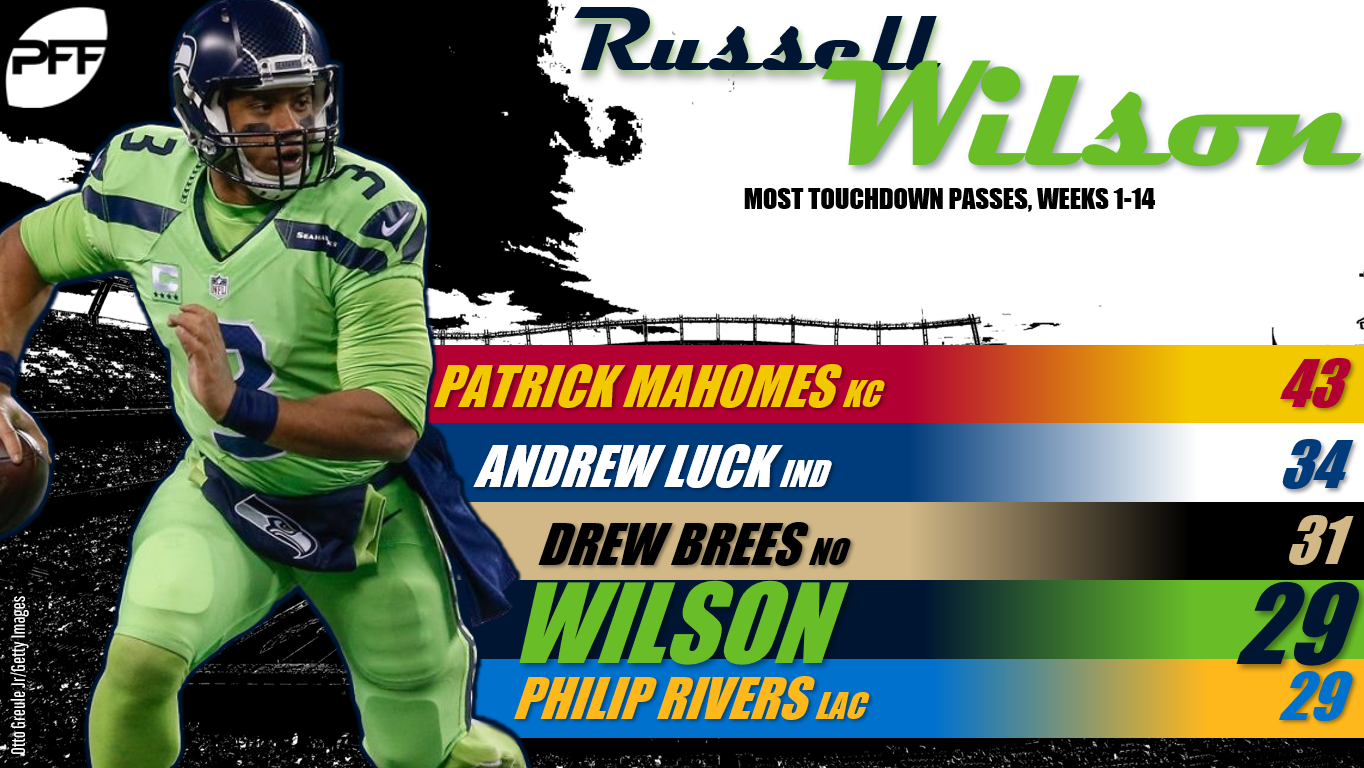 While Russell Wilson hasn’t put up big yardage numbers, he has managed to find the end zone through the air and currently sits tied for fourth in the league with 29 touchdown passes. Better yet, we have a recent sample of how he’ll fare against the 49ers. Wilson faced San Francisco just two weeks ago and tossed four touchdown passes in that contest.

Aaron Rodgers hasn’t lived up to his status as the No. 1 fantasy quarterback in this year’s drafts. He enters the week ninth among quarterbacks in fantasy scoring, and to make matters worse, he gets an absolutely brutal draw against the Bears. Chicago has allowed just one passing score over their last three games. Fade Rodgers if you can this week.

It’s been a roller-coaster ride at quarterback in Tampa Bay this season, but Jameis Winston seems to have finally gained control of the position. Winston has been in play as a QB1 fantasy option over the last several weeks, but fantasy owners may want to look elsewhere this week. Winston has to face a stout Ravens defense that hasn’t allowed more than two passing touchdowns since Week 2.