Hello, and welcome to Week 13 of the Expected Fantasy Points Report. If you’re unfamiliar with expected fantasy points, you can read this in-depth explanation from the offseason. You can also read more about expected touchdowns.

Through 12 weeks of action, here are the top-25 players in expected fantasy points per game: 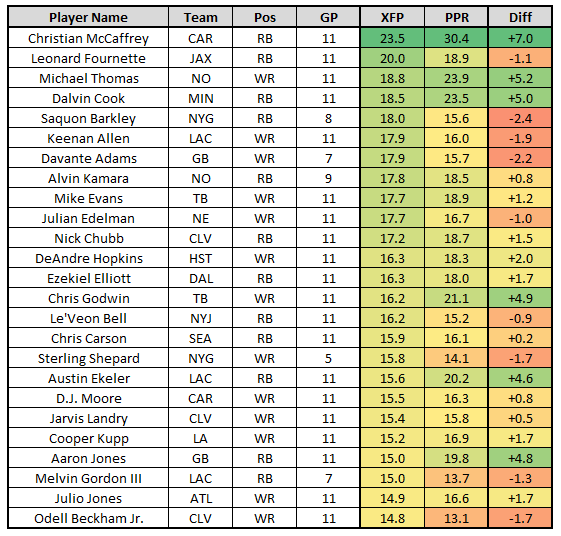 Finally! The regression has hit Fournette, but probably not by as much as you’d think. Fournette scored 36.9 fantasy points in Week 12, but he got there on a 33.9-point expectation, the most by any running back in any week this season. Fournette saw a Christian McCaffrey-like workload, playing on 80 of 84 snaps while receiving 24 carries, 11 targets, and four opportunities inside the 10-yard line. He now ranks second among all players in XFP per game (20.0) and fifth among running backs in fantasy points per game (18.9), while still ranking as the top touchdown regression candidate at the position, falling 4.5 touchdowns shy of his expectation.