Other holidays simply miss the mark; the focus shouldn’t be on presents or candy or your relatives' latest and greatest talking points — it should be about football. This is why Thanksgiving is the best — a sole focus on football and food. And there is no better way to sweat out the NFL action than with large sums of cash hanging in the balance.

Editor's note: This article was published before the cancellation of the Thanksgiving Day matchup between the Baltimore Ravens and Pittsburgh Steelers. Be sure to stay on top of fantasy football Week 12 by checking out PFF Fantasy's rankings, projections, strength of schedule tool, WR/CB matchup charts and DFS lineup optimizer!

Here, my weekly series on game stacks and blowup performances has been condensed into one article to give you the best DFS recommendations for this Thanksgiving slate of football. We will walk through each game to get some ideas on which ones are the best to game stack. The blowup model will then highlight the wide receivers and tight ends with the best opportunity to clear our fantasy point threshold Thursday.

The game with the highest total on the Thanksgiving slate should attract plenty of DFS ownership, but our predictive models actually lean toward the under in this matchup. The cash and ticket percentages both lean the opposite direction, as these two teams have the worst opponent-adjusted defensive rankings in the NFL.

There is a heightened sense of decision making on a smaller slate, as any pivot can separate your lineups from the chalk entries that flood GPP contests. Deshaun Watson will likely be the highest-owned quarterback on the slate, but he shouldn’t be faded for that reason alone. Stacking with Jordan Akins offers not only salary savings but also a way to make your lineup more unique. He is on the blowup model for the third straight week after running a route on 55% of dropbacks in Week 11. If he finds the endzone, he could easily be the best play at tight end.

Brandin Cooks is my preferred choice in choosing a Texans wide receiver. He has run a route on 100% of dropbacks the past two weeks and has the same target share percentage as Will Fuller V this season.

The run-it-back stack in this matchup is difficult to nail down, as the Lions could have their full complement of wide receivers available. The least risky option is Marvin Jones Jr., who is also on the blowup model but comes with a salary based on him being the only receiving option. Kenny Golladay could be the correct pivot if he is available, which makes this a situation to monitor through kickoff.

Andy Dalton is coming off his best performance as the Cowboys' starters, which has pushed this spread in his team's direction. Our predictive models view this as a slight overcorrection from the pick ‘em opening spread but need to add the hook to find value on the Football team.

This is the only Thanksgiving matchup that offers value on the over. The cash and ticket percentages have been slightly skewed toward the under, which provides some signal that people don’t expect this matchup to turn into a blowout. It could be the lowest-owned game stack option, as bettors will gravitate to the high total or quality matchup that this game is sandwiched in between.

Our game stack model actually sees this as the best chance to put up the highest-scoring fantasy performance at the quarterback position Thursday. Dalton is the preferred option to Alex Smith despite the spread indicating that they could be leading throughout this matchup. Dalton should still see plenty of passing game work, but choosing between his trio of receivers is more difficult.

Michael Gallup is the cheapest option, and CeeDee Lamb should be the most-owned receiver — which makes Amari Cooper the correct play. Cooper is the only one showing up on the blowup model after his seven-target outing last week, a game in which he also posted his second-highest average depth of target this year. It was only the second time since the Prescott injury that he saw over 30% of the Cowboys' targeted air yards.

The best option from Washington is clearly Terry McLaurin, who could be the most-owned player on the slate. Instead of fading this, one of the best approaches is to do a more unique lineup build by including Antonio Gibson. Most will double stack Dalton with two of his pass-catchers, so getting multiple Washington players in will be a low-owned approach with significant upside.

This AFC North nightcap features the lowest total and the widest spread of any Thanksgiving game. This could drive DFS players away, but with both teams in our top five, bettors could easily gravitate toward targeting this matchup.

The Ravens' passing offense has been atrocious, with Lamar Jackson ranking 25th in PFF grade from a clean pocket. For this game stack to be viable, Jackson has to get it going with his arm. The perfect way to play into this narrative is to double-stack both Marquise Brown and Mark Andrews. Brown is now cheap enough that one play could pay off his salary. His high average depth of target makes this even more apparent if he gets one catchable downfield pass.

Andrews is coming off his most raw air yards of the 2020 season after notching 121 in Week 11. He accounted for 24% of the team target share and 42.6% of the air-yard share. He is the focal point of this passing offense and should be the top-owned player at the tight end position. It should be fairly easy to differentiate your lineup at a different position if Jackson is your target at quarterback.

The Steelers have a trio of quality receiving options, and James Washington has also emerged in recent weeks. They are still led by Diontae Johnson, who has a 28% target per route rate the past three games. During this stretch, he has 27% of the team target share and 25.6% of the air yards. Chase Claypool is the downfield threat, but Johnson is seeing too many targets to not be the best option in this game stack. 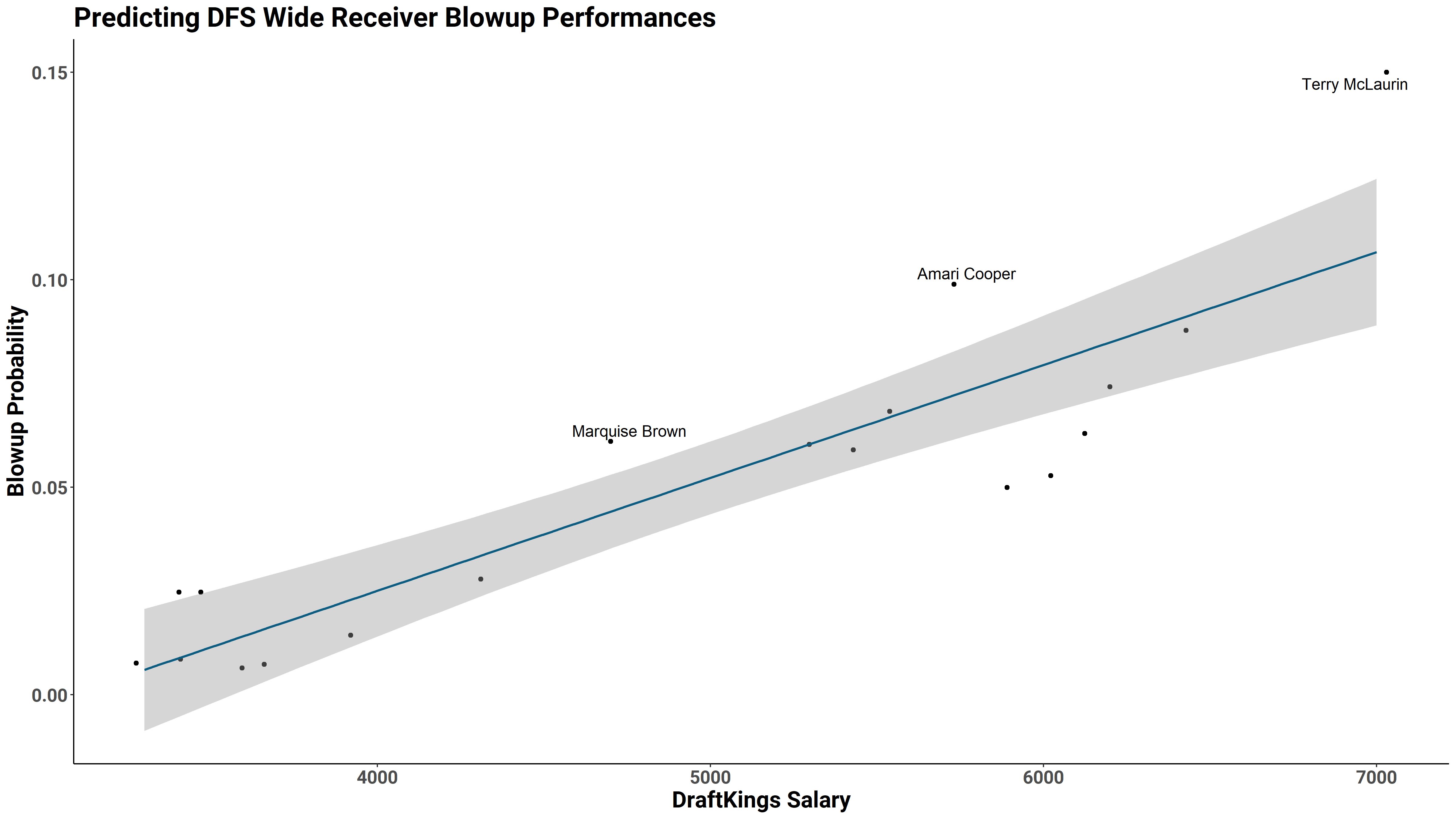 McLaurin leads the NFL in percentage of total air yards, at 43.7%. He is 12th in total air yards, as the Football team has the third-lowest team total air yards in the NFL. The opportunities aren’t as frequent as those on other squads, but when Washington airs the ball out, it is going in McLaurin's direction. As the highest-priced wide receiver on the Thanksgiving slate, McLaurin is tough to pass over. His 28% matchup advantage over Chidobe Awuzie could go overlooked due to numerous mid-range wide receivers posting better advantage percentages.

Andy Dalton turned in his first quality game as the Cowboys' starting quarterback, with Cooper moving back to his higher-volume usage with the veteran under center. In the three games that Dalton has started, Cooper has 22% of the team targets and 28% of the air yards. The opportunities are spread fairly evenly between Cooper and CeeDee Lamb, with Michael Gallup continuing to be a deep threat while managing a low target share but a high air-yard share.

Cooper is popping up in this model but has the most difficult matchup among Cowboy wide receivers Thursday. This should cause his ownership to plummet, making him an intriguing option in GPP contests.

2020 has been a disaster for Brown, who continues to struggle in connecting with Lamar Jackson. He ranks fourth in average depth of target among wide receivers with at least 30 targets. The problem is that he has the 12th-lowest percentage of targets being catchable, at just 66%.

He is now at his lowest price of the season, so one long catch would easily pay off his salary. The Steelers have the best coverage grade in the NFL and are unmatched in defensive performance this year. The one area they have struggled with is in downfield coverage. They have allowed the third-highest percentage of targets 10 or more yards downfield where the receiver is open or gained a step on the defender. The only two teams above them are the Raiders and Jaguars.

In a condensed slate with few viable options, Brown makes for an intriguing dart throw at low ownership and salary. 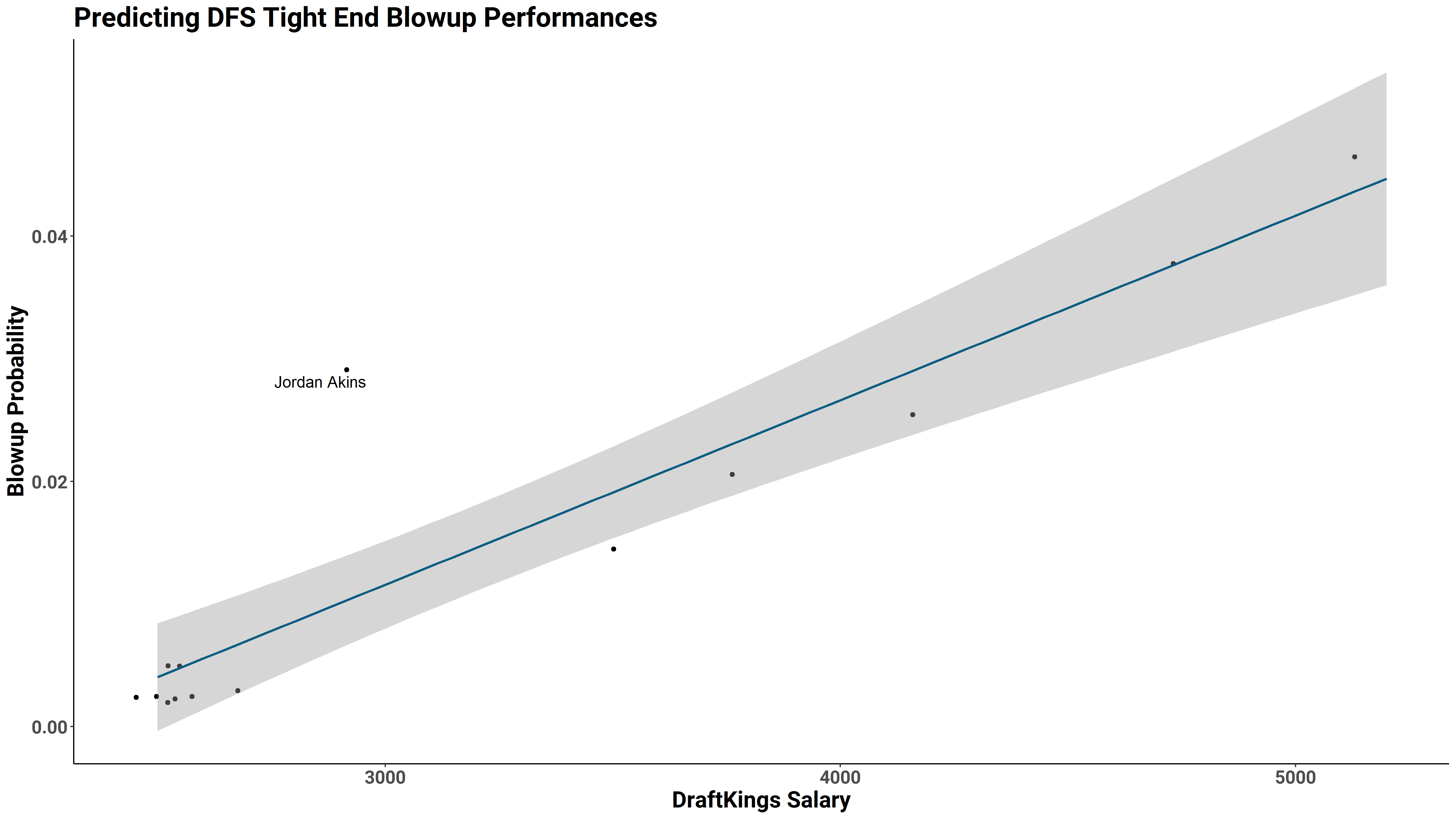 The model has liked Akins the past two weeks, with his blowup performance coming last week. His salary hasn’t adjusted to the point where he is no longer a viable play. He ran a route on 55.8% of the Texans' dropbacks in Week 11, which is the first time he went over 50% since Week 3. If he gets back to his early-season snap usage of 80%, Akins is a slam-dunk option at the tight end position. 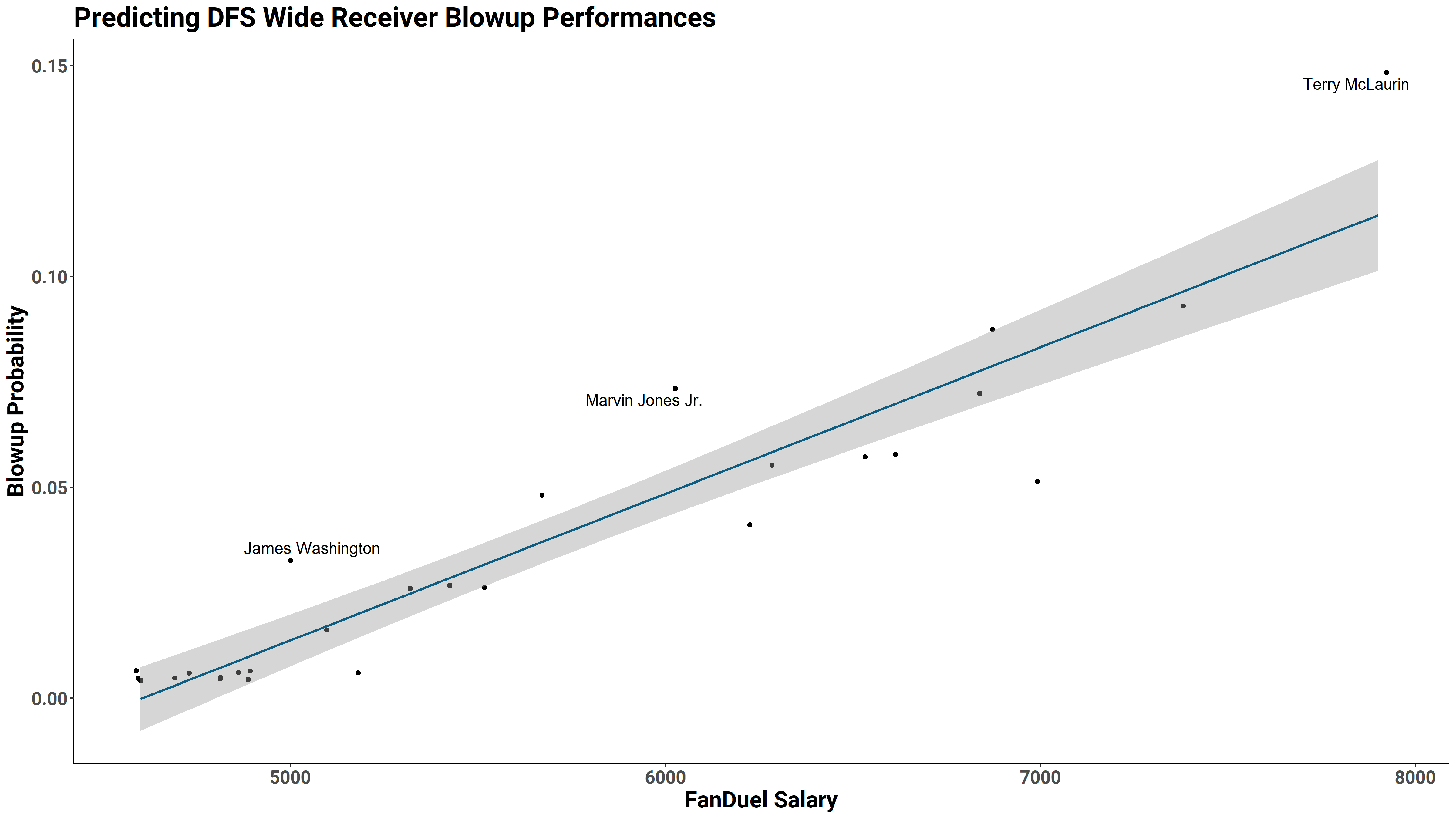 Jones had a 51-yard reception wiped out by penalty, which will cause most to overlook his Week 11 performance. Jones was the only receiver left standing for the Lions, but Kenny Golladay and Danny Amendola appear to be trending in the right direction to play Thursday. This severely limits the upside for Jones, who also has had his salary increase by $900 over the past four games. The matchup is appealing, however, with the Texans having the worst opponent-adjusted coverage grade in the NFL.

Jones has the ideal matchup against Vernon Hargreaves III — if everyone moves off Jones because of injury news, he could be an intriguing pivot in the highest-total game Thursday. 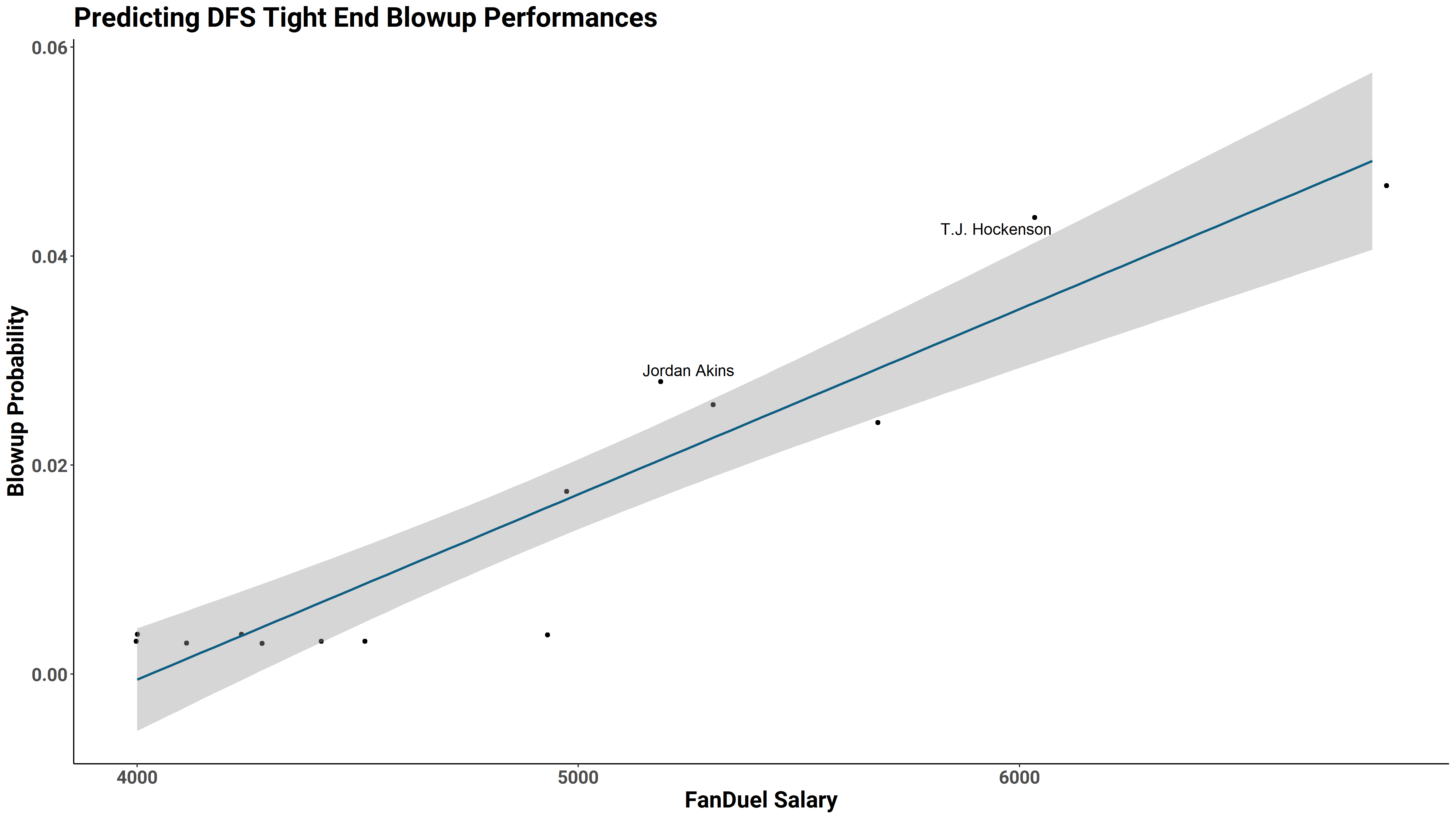 All of the things that were said about Marvin Jones Jr. are also true for T.J. Hockenson. The difference is that Hockenson has been viable the entire season due to how bad the fantasy tight end position has been. He has consistently been running a route on 68% of Lions' dropbacks, with no increase occurring due to the injury situation at the wide receiver position.

Hockenson is less influenced by the return to play for Amendola or Golladay. His matchup is enticing, as our tight end matchup chart gives him a 31% advantage over Zach Cunningham. 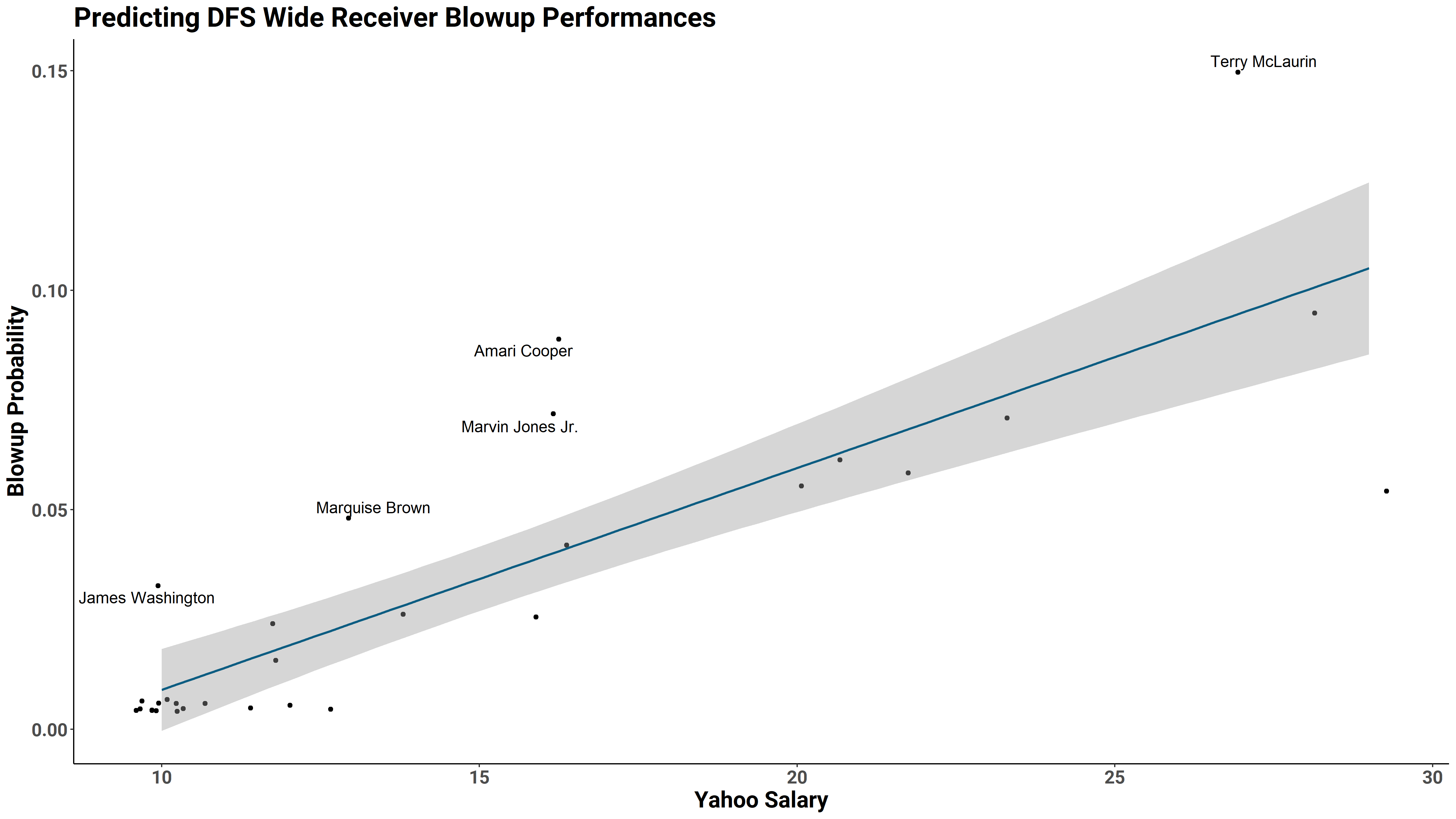 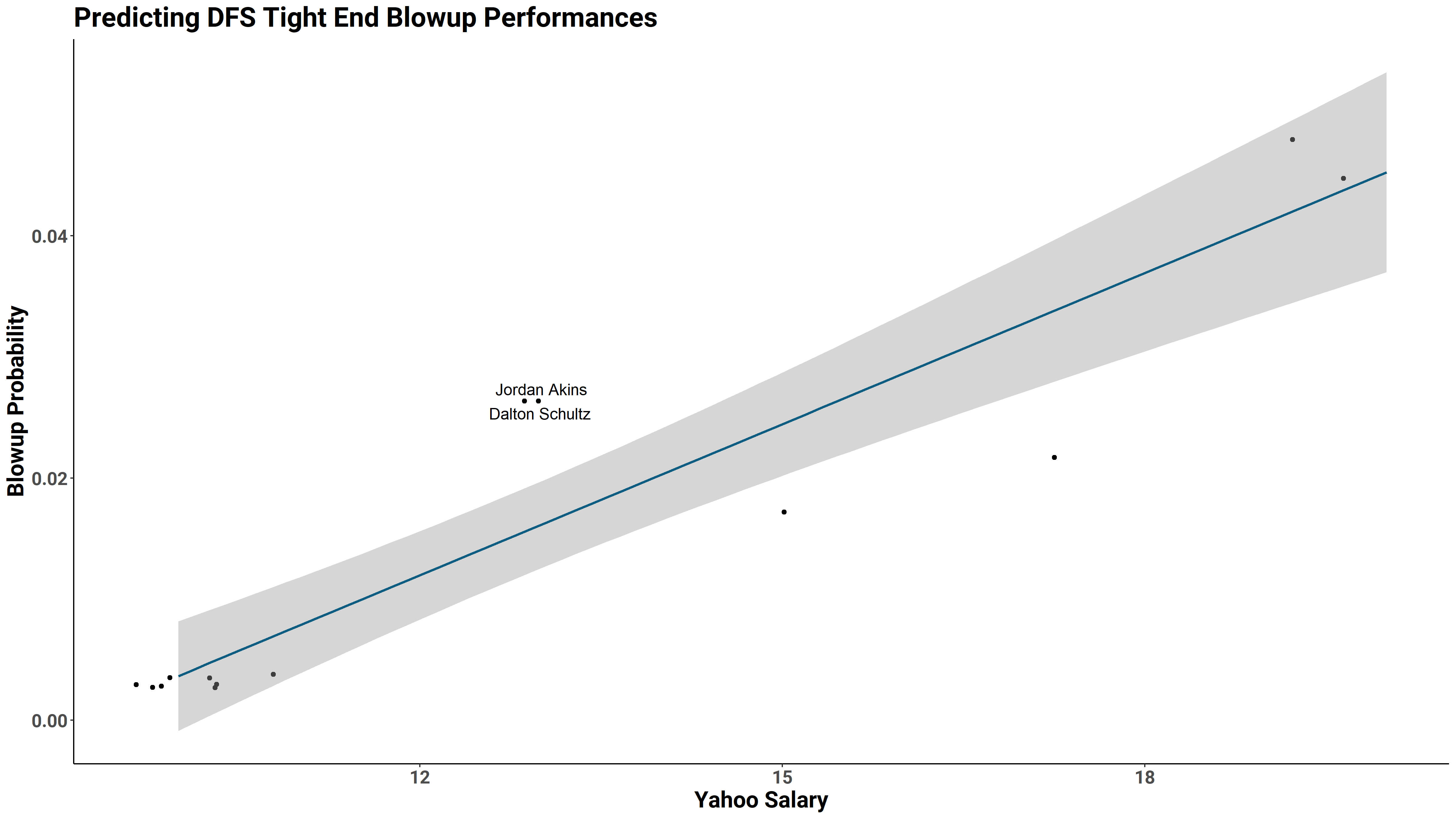