Each week in this space, I’ll be highlighting the players I’m building most of my lineups around on that week’s main slate. (Most of these locks are for tournaments, though I’ll do my best to differentiate where needed.) Lock these guys into lineups and go from there. Check out below for Week 5.

Sunday’s Texans-Falcons game carries a 49-point Vegas over/under, the highest on the main slate and second-highest of the whole weekend, and the Texans have the third-highest implied point total (27 points, behind only the monster favorites of Philadelphia and New England). Watson’s upside — especially when paired with upside candidates DeAndre Hopkins and/or Will Fuller — is appealing.

This game is the only one on this week’s main slate to feature two teams in the top half of plays per game, with the Cardinals averaging 67.0 plays and the Bengals 64.0. Considering the teams were 30th (Cincinnati) and 31st (Arizona) in pace a year ago, that’s notable. Add in that Cincinnati has PFF’s worst tackling grade (44.0) and second-worst coverage grade (37.5), and this could be the game that really gets Murray going.

After Dalton’s disastrous Week 4 performance, he’s likely to be lightly owned this week (check out DFS ownership projections). But even with that awful game, Dalton still ranks top 10 in the league in dropbacks, pass attempts, completions, and passing yards. The aforementioned good pace should help him as well.

Some weeks it makes sense to pay down a little at running back. This week? You’re likely spending. 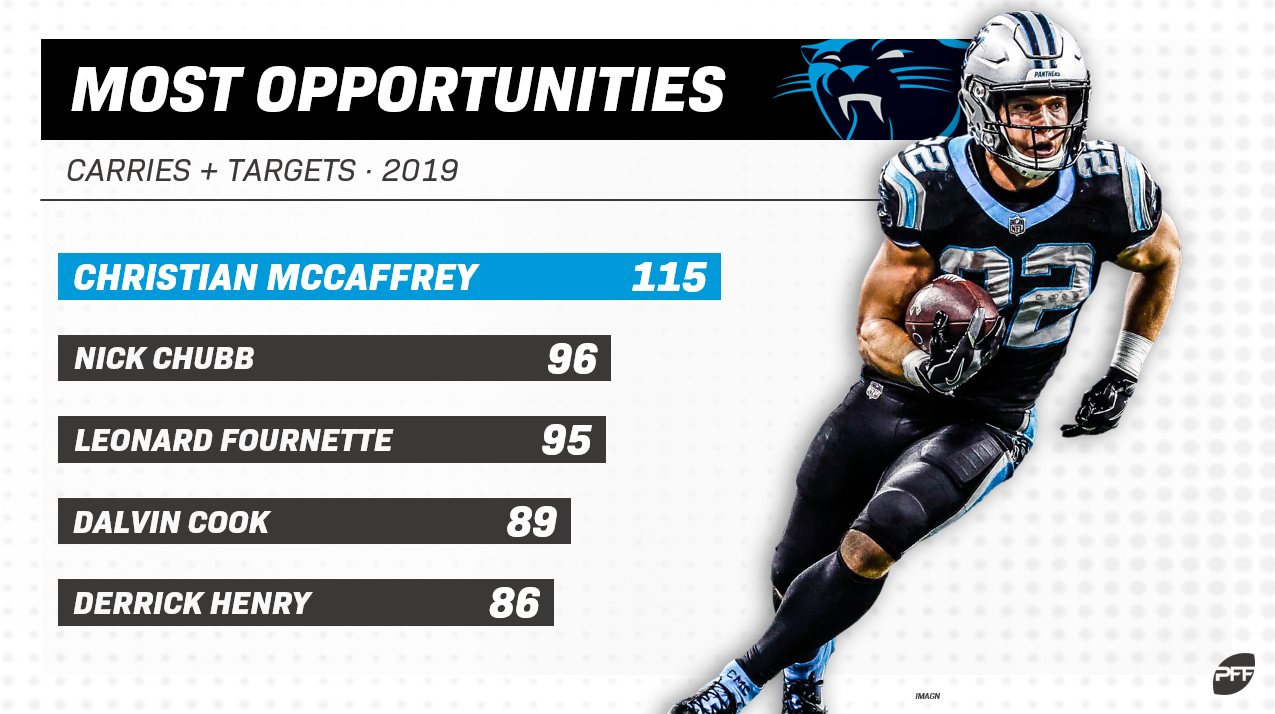 McCaffrey is just a DFS cheat code at this point. He’s leading the league in total opportunity (carries plus targets) at 115, 19 more than any other player. Only 10 players have even 80 opportunities so far. Yes, you’ll have to splurge on McCaffrey. But who even cares?

Take out Green Bay’s destruction of Chicago in Week 1, and backfields against the Packers have averaged 234 yards and 2 touchdowns per game. It is a ridiculously porous run defense while simultaneously offering a good pass defense headed up by PFF’s No. 2-graded coverage cornerback in Jaire Alexander. Alexander shuts down Amari Cooper, Elliott reaps the benefit.

Speaking of porous backfield, seven different running backs have topped 14 PPR points against the Bengals so far (in four games, remember). That includes three different 49ers backs in Week 2 (Raheem Mostert, Jeff Wilson Jr., and Matt Breida), and it includes two different Steelers backs topping 20 points in Week 4. Well, take all those disparate committee-like backfields and concentrate them to one man in Johnson, who also will likely not see Christian Kirk on the field, giving him more shots at targets.

Want to go off the beaten path a bit? Montgomery’s primed for a breakout after seeing his workload climb each week so far, peaking at 31 opportunities in Week 4. Chase Daniel looked competent filling in for Mitchell Trubisky in Week 4, but the Bears might lean on the running game with the backup at the helm, and with Mike Davis seemingly out of favor, that leaves it to Montgomery.

Thomas averaged 3.63 yards per slot route run in 2017. That was the best in the league. He then averaged exactly the same 3.63 slot YPRR in 2018, again best in the league. So far this year, Thomas has actually improved those numbers, up to 3.89. It’s second-best in the league, because Kenny Stills has been really efficient out of the slot, but the point is clear — there is no better slot weapon in the league than the Saints’ top receiver. Remember the games Cooper Kupp and Robert Woods just had against Tampa Bay? Slot is how to attack the Bucs.

Per our WR/CB matchup chart, Jones and Ridley have two of the eight easiest matchups of Week 5 against Houston, drawing Lonnie Johnson Jr. and Johnathan Joseph, respectively, in coverage (neither is a slot situation, so expect this to bounce back and forth a bit). Joseph is tied for the league lead in receptions allowed, while Johnson has the second-lowest PFF grade (35.3) of all cornerbacks so far.

Let’s just say this game has a lot of fantasy options. Kenny Stills being out or at less than 100% this week opens the door for Fuller to produce. He has 9 deep targets so far this year but no scores to show for it (he and Curtis Samuel are the only players with as many deep targets without a deep touchdown). Regression has hit Fuller, but it’s gone too far the other way. Hopkins, meanwhile, is still averaging 9.0 targets per game. Expect him to get right.

Remember above, when I reference the WR/CB matchup chart and said that Lonnie Johnson Jr. was the second-lowest-graded cornerback? Well, Thielen has the best matchup of the week per the chart, drawing DeAndre Baker, who has the lowest cornerback grade. Add in the “squeaky wheel gets the grease” narrative after Thielen spoke out earlier this week, not to mention questions about Stefon Diggs’ situation, and we might finally see a big Thielen game.

Christian Kirk’s injury leaves plenty of targets up for grabs in Arizona. Some combination of KeeSean Johnson and Andy Isabella could get some of them, and David Johnson might as well, But the resurgent Fitzgerald is likely to be the biggest beneficiary of Kirk’s absence against one of the league’s worst defenses.

A.J. Green’s still out, and John Ross has now joined him on the sidelines. Boyd is already tied for fifth in the league in WR targets with 36, and everything keeps conspiring to give him the job all to himself more and more. Expect him to get peppered Sunday. 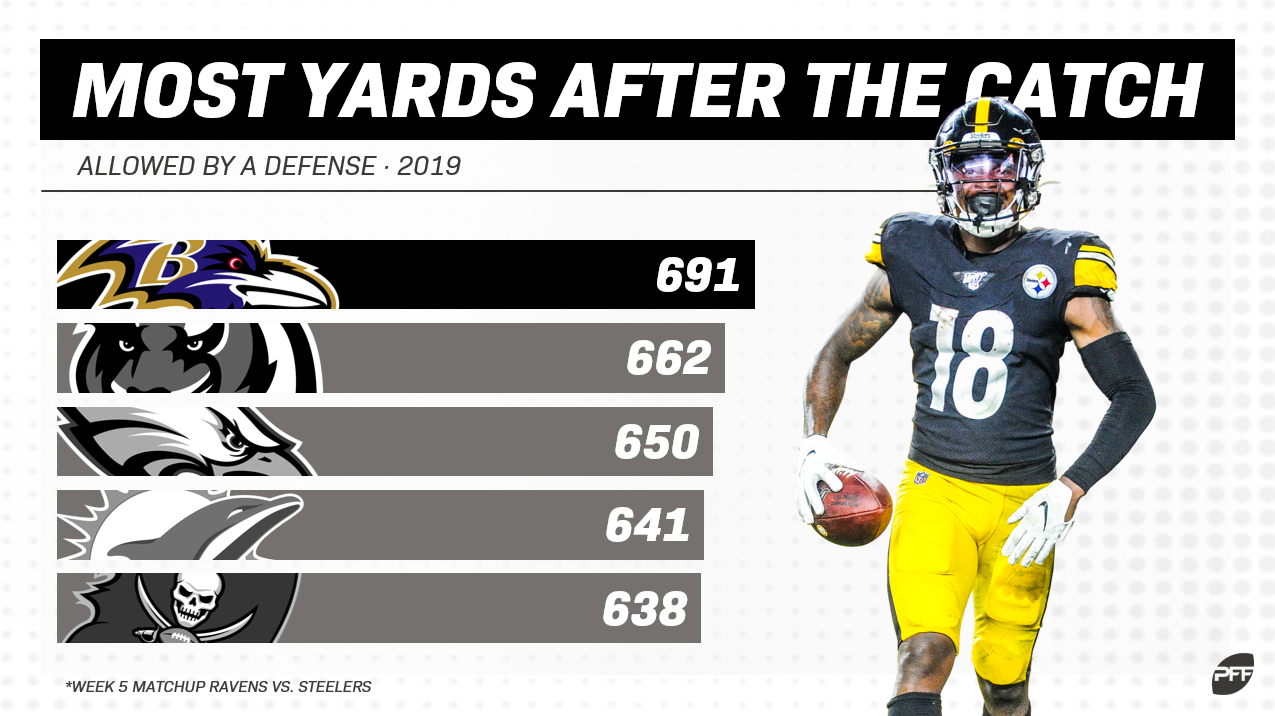 Andrews leads Baltimore in slot targets this year, catching 14-of-18 targets for 183 yards (2.95 slot yards per route run) and a pair of scores. He’ll get covered largely by Pittsburgh S Terrell Edmunds, who has allowed 3.72 yards per route covered this year.

Tight end. Against Arizona. Moving on.

Graham’s getting plenty of red-zone and end-zone looks so far this year, and with Davante Adams likely out Sunday, he’ll see even more. You aren’t counting on much in the way of yardage from Graham, but there might be no tight end more likely to find a touchdown.