The New England Patriots have signed WR Demaryius Thomas, formerly of the Broncos and Texans, to a one-year contract worth up to $6 million, according to Ian Rapoport. We don’t yet know how much of that is made up in incentives, but if Thomas reached the full value of that deal, he’d be New England’s highest-paid receiver in 2019. This signing reunites Thomas with OC Josh McDaniels, who coached Thomas in his 2010 rookie campaign while in Denver.

From 2012 to 2017, Thomas was one of fantasy's most dependable wide receivers, with fantasy finishes of fifth, first, second, ninth, 16th, and 16th over that span. You’ll notice a steady decline over the latter three seasons, though that might have been caused more by poor quarterback talent (Brock Osweiler, Trevor Siemian) than by play. Still, that decline pales in comparison to what we saw from Thomas last year — a career-low PFF grade of 71.5 (42nd) and a ranking of just 36th in total fantasy points. Thomas reached 65 yards just once last season and has topped 100 yards just twice over his last 34 games. 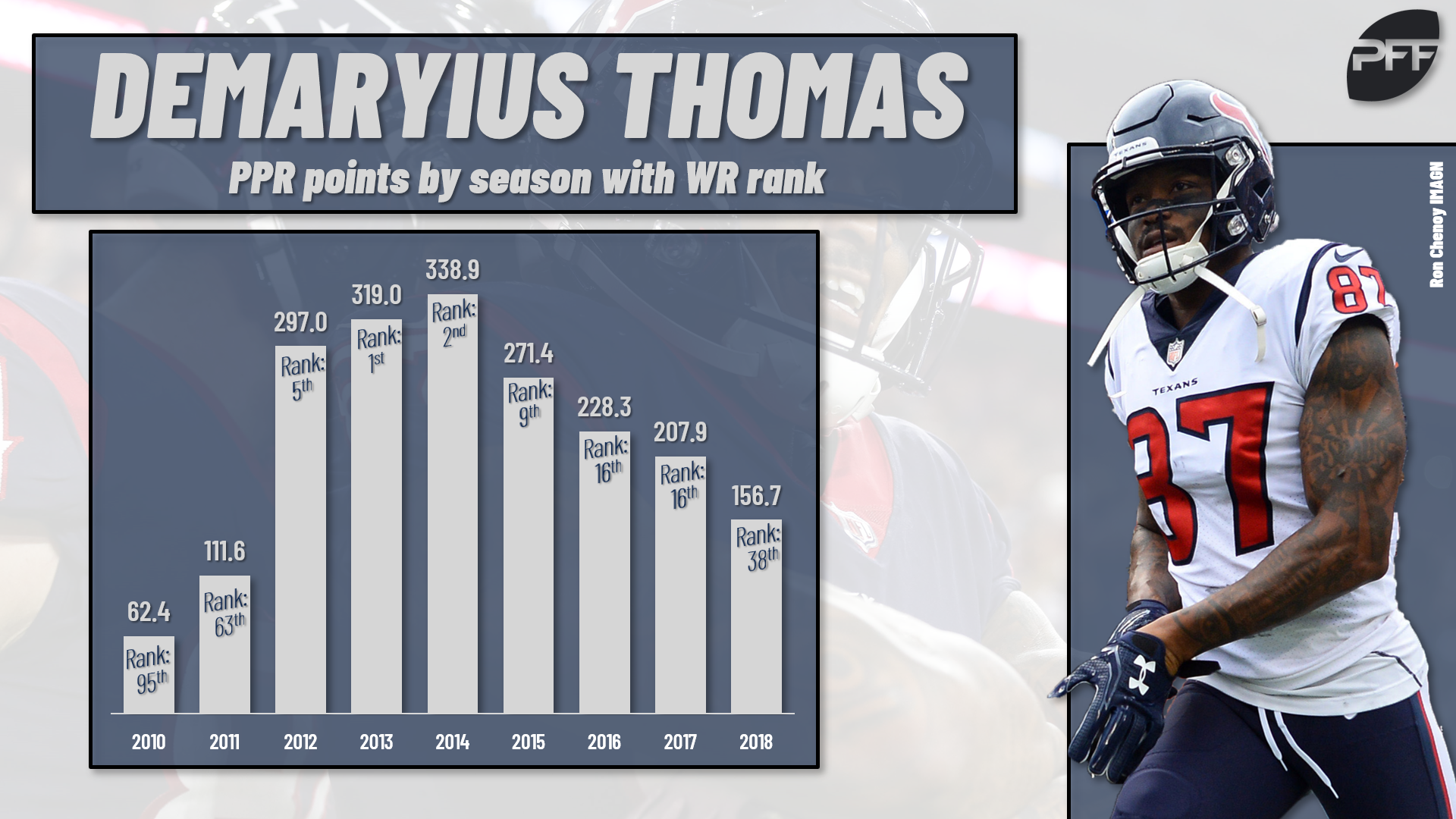 Granted, Thomas had to contend with a change of scenery halfway through the season (traded for a fourth-round pick to the Texans), but he’s also now 31 years old and coming off of his second torn Achilles (suffered in Week 16 of last year). Reports are optimistic he’ll return sooner than expected but it’s likely he won’t be ready for the start of the season.

Although Thomas has major injury concerns and is likely now far removed from his physical peak, this was an ideal landing spot. The Patriots have ranked top four in points per game in each of the past nine seasons. They also lost Rob Gronkowski (72 targets) to retirement earlier this offseason and Chris Hogan (55) to free agency, and Josh Gordon‘s (68) status is still up in the air. As soon as he steps onto the field, Thomas seems a near-lock to be third on the totem pole for targets (behind Julian Edelman and James White). Over the past five seasons, Tom Brady’s No. 3 receiver has averaged 87 targets per season — exactly Thomas’ total last year (good for 39th-most among wide receivers).

After balancing all of Thomas’ risks with this landing spot, I’m bumping him up to the fringe-WR4 range in my rankings. He’ll be touchdown-or-bust, but he should meet that value on a per-game basis by year’s end.