See below for how I’ll be attacking the Week 5 AAF slate over on FanBall.

Make sure you’re also checking out our rankings and projections and Jeff Ratcliffe’s WR/CB matchup chart for Week 5 of the AAF inaugural season. 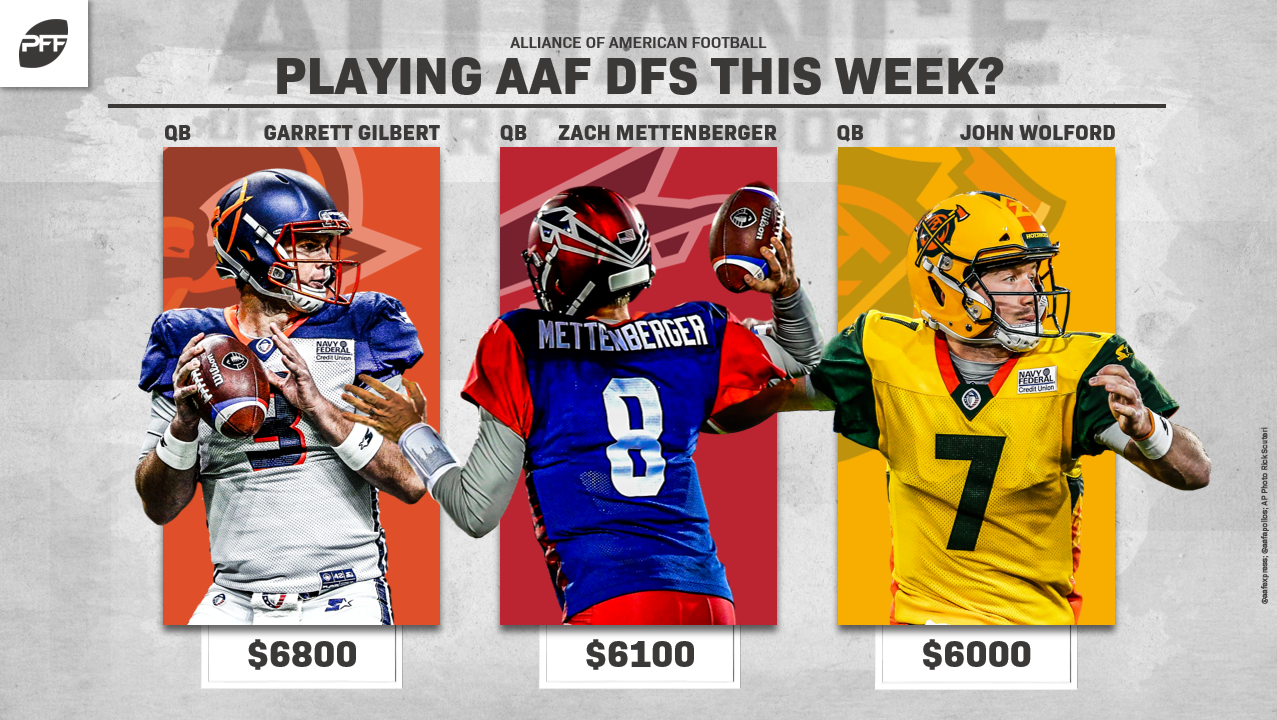 I have all three ranked about even, and I expect that’s how I’ll approach DFS tournaments this week – splitting my ownership evenly among them.

Stacy ranks third, second, and fourth in weighted opportunity over the last three weeks, averaging 16.7 carries and 2.7 targets per game over this span. He gets a best-possible matchup this week, against Atlanta. The Legends are surrendering the most fantasy points per game (29.4, +4.0) and the most rushing yards per game (120.0) to opposing running backs, while also allowing a 5.04 yards per carry average (the league average rate is 4.23).

Pressley totaled 123 yards on 13 carries and five targets in Week 4. That volume gave him the third-best weighted opportunity score of the week (16.1). That doesn’t seem too impressive on the surface; however, if excluding all Richardson games, that was also the second-best weighted opportunity score of any running back in any week this season. He played on 57% of the team’s snaps in Week 4, which ranked behind only Farrow (77%), Stacy (62%), and Richardson (58%).

Ja'Quan Gardner ($5,600) has posted two of the AAF's three highest-scoring fantasy weeks at the position (in Weeks 2 and 3). He'd be a bet on efficiency, rather than volume, after drawing just nine carries and two targets last week (19 total yards). Still, it's a risky bet, and probably not one I'm going to be making this week, up against a Salt Lake defense that leads the league in yards allowed per carry (3.48).

If dumpster-diving at the position this week, Tarean Folston ($4,200) and Brandon Radcliff ($4,500) stand out for Atlanta. They have the second-best matchup of the week, up against Memphis (25.4 fantasy points per game allowed to running backs). Radcliff made his first AAF appearance last week, playing on 20 snaps, totaling 48 yards on 12 carries and one target. Folston was a Week 3 inactive, then named the starter in Week 4. He led Atlanta's running backs in snaps with 28, totaling 87 yards on five carries and six targets. The spread expects to be close and Memphis is a little more vulnerable (to running backs) on the ground than through the air, which suits Radcliff better, but Folston makes more sense on Mettenberger lineups (if you think Memphis puts up points).

Jalin Marshall ($5,400), De'Mornay Pierson-El ($5,000), and Nelson Spruce ($5,700) rank fourth, fifth, and sixth in fantasy points, while all also ranking between 10th and 13th in targets and air yards. Pierson-El would appear to be the best value, ranking 11th in salary, to Marshall’s eighth, and Spruce’s fifth. However, Pierson-El saw only two targets last week, while Marshall saw six (sixth-most), and Spruce saw five (12th-most).

Mekale McKay ($5,100) looks like a terrific value on paper, ranking third in fantasy points, second in targets, second in air yards, and 10th in salary. That said, he’s seen a decline in volume in recent weeks, totaling only 11 targets over the last two weeks, after averaging 11.0 targets per game over the first two weeks of the season.

Greg Ward ($4,800) and Seantavius Jones ($4,400) haven't been very productive, but both have seen good volume, and especially when contrasted to their respective price-tags (Ward ranks 13th in salary and Jones ranks 19th). Ward ranks 13th in fantasy points, but fifth in targets and air yards. Jones ranks 16th in fantasy points but seventh in targets and air yards. Ward has seen six targets in each of the past three weeks, though Jones saw only two last week (after target totals of seven, seven, and eight).

L’Damian Washington ($4,600) has seen four, six, and then seven targets over the last three weeks. He’s turned that into only 10 receptions for 92 yards, but also ranked second among all receivers in air yards last week (126).

Dontez Byrd ($4,000) recently emerged as a full-time player for Memphis. After averaging 14.7 snaps per game, he played on 51 last week. He’s only seen five targets over the past two weeks but caught four of those passes for 71 yards. Ideally, he should be in line for more work this week. Byrd’s teammate Devin Lucien ($4,100) was inactive over the first two games of the season but has seen good volume since Week 3 (coinciding with Mettenberger’s first dropbacks of the season). Over this span, he totals eight targets, six receptions, 70 yards, and one touchdown. Still, he’s just his team’s WR4 in snaps.

In Week 4, Freddie Martino ($3,700) emerged as the WR3 by snaps for Arizona. Still, he saw just three targets last week, and now totals only 42 yards on six targets over the past two weeks. He seems to be a fine value but would become too risky to play if Richard Mullaney ($3,000) makes his return this week. Mullaney ranked third in target market share (25%) heading into Week 3 but missed his team's last two games due to injury. If he’s active, he might be the best value play on the board at a stone-minimum price-tag. If he's out, we should also look at Josh Huff ($5,600), who, though expensive, saw terrific volume in his absence, ranking first in targets and air yards over the past two weeks.