Are you an absolute fantasy football fanatic, a DFS junkie, or just someone intrigued by the new Alliance of American Football League? Well, if so, I’ve got good news for you. FanBall has a DFS platform for the AAF and, now, we’ve got content for it.

See below for how I’ll be attacking the Week 2 AAF slate over on FanBall.

Make sure you’re also checking out our rankings and projections and Jeff Ratcliffe’s WR/CB matchup chart for Week 2 of the AAF inaugural season. 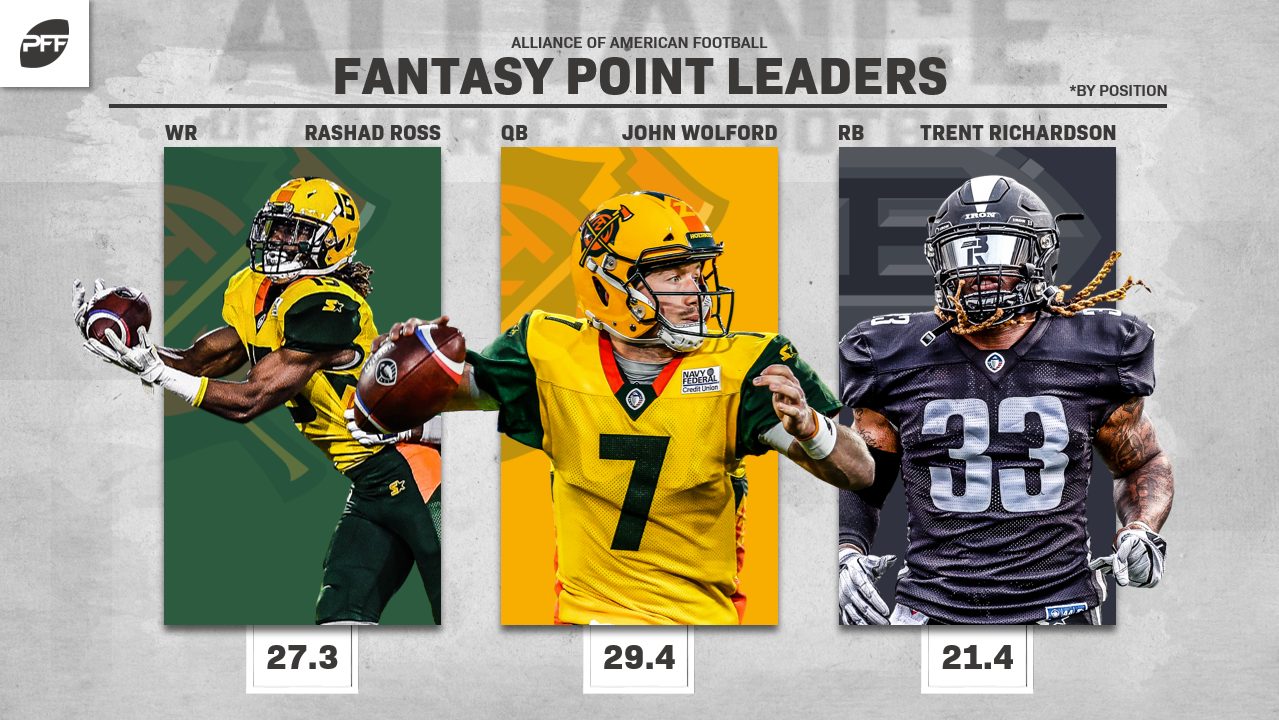 Wolford is the highest-priced quarterback (though not by much) and is well worth paying up for. Last week, Wolford led all quarterbacks in fantasy points with 29.4, or 10.5 more than the next closest quarterback. He also led the position in passing yards, passing touchdowns, passer rating, PFF grade, and rushing yards. The Hotshots were the heavy favorites to win it all this year and it’s easy to see why – out of the gates they seem to have the best offense, be the best all-around team, and have the league’s best coaching staff.

Other: The only reason to fade Wolford would be due to ownership concerns (he’ll be massively owned) or for diversification purposes. The other quarterbacks to consider are:

Richardson is the highest-priced player on the slate but for good reason. He led all running backs in fantasy points with 21.4 (4.8 more than next closest) while also drawing the best volume, with a 16.5 weighted opportunity score (2.5 more than next closest). He benefited from terrific volume (25 carries, three targets, and goal-line work) in a blowout victory (a 26-0 rout), but he should see both again. His opponent (Salt Lake) lost by 16 points in Week 1. Unfortunately, Richardson still looked like the Richardson we all remember from his NFL days, averaging 2.32 yards per carry, but he’s a big-name draw in an up-and-coming league and should continue to get good volume to help fill the stadium.

Though Richardson saw terrific volume, he was more of a workhorse than a bell cow for Birmingham, as Perkins ranked second among all running backs in weighted opportunity (14.0), drawing five carries and a whopping seven targets. He caught six of those targets and scored 13.0 fantasy points (fourth-most at the position). Those seven targets were enough to push him up to fifth among all players in target market share (22%). Remember, this was despite gamescript that didn’t necessarily lend itself well towards a pass-catching running back. Based on this volume and his Week 2 price tag, he’s a very intriguing option this week.

After Perkins, I like Folston as another cheaper, potentially low-owned running back. He ranked third in weighted opportunity (13.3), on the back of 12 carries and four targets. All other Atlanta running backs combined for eight carries and one target last week, which gives Folston the second-best weighted opportunity market share of the week. Atlanta lost by 34 points last week and gamescript should be better for Folston against San Diego who lost their matchup by nine points.

Ross ($6,100) was our highest-graded wide receiver of the week and led all receivers in fantasy points (27.3) by 12.6. He’ll be heavily owned but he’s also the clear top wide receiver in my rankings this week, just ahead of Patton ($6,300) and then McKay ($6,800). All three also ranked top-three in air yardage and air yardage market share.

Alonzo Moore ($5,100) only saw five targets but did rank fourth in air yards (127) last week and ranked as our third-highest-graded wide receiver. He’s just the 19th-highest-priced receiver this week. I’m also intrigued by Charles Johnson ($6,000) and Jalin Marshall ($5,200), who stand out due to talent, NFL experience, decent volume, and high-end Week 1 grades. Marshall actually ranked third among all receivers in fantasy points in Week 1 but ranks 18th in salary.

It’s still early to read too deeply into matchups, but Atlanta and then San Diego stand out as having the league’s worst secondaries. They play each other this week, which means boosting Owusu (seven targets, two catches) and Brian Brown (six targets, five catches) for San Diego and Seantavius Jones (seven targets, three catches) and Malachi Jones (six targets, zero catches) for Atlanta. Of these names, Brian Brown is clearly the best play of the bunch, at a site minimum salary of only $3,000.

tl;dr: Rashad Ross, Quinton Patton, and Mekale McKay (in order) are worth paying up for. Brian Brown and Anthony Denham (in order) are the two clear top value plays. After that, there are a number of names worthy of consideration but who don’t stand out nearly as much.