The AAF was a surprise hit in its inaugural weekend, and many fantasy football diehards managed to find their way into a league or three. To make things a bit easier for folks setting their lineups this week, we combed through the data and put together fantasy football rankings and projections for Week 2 of the AAF. Enjoy. 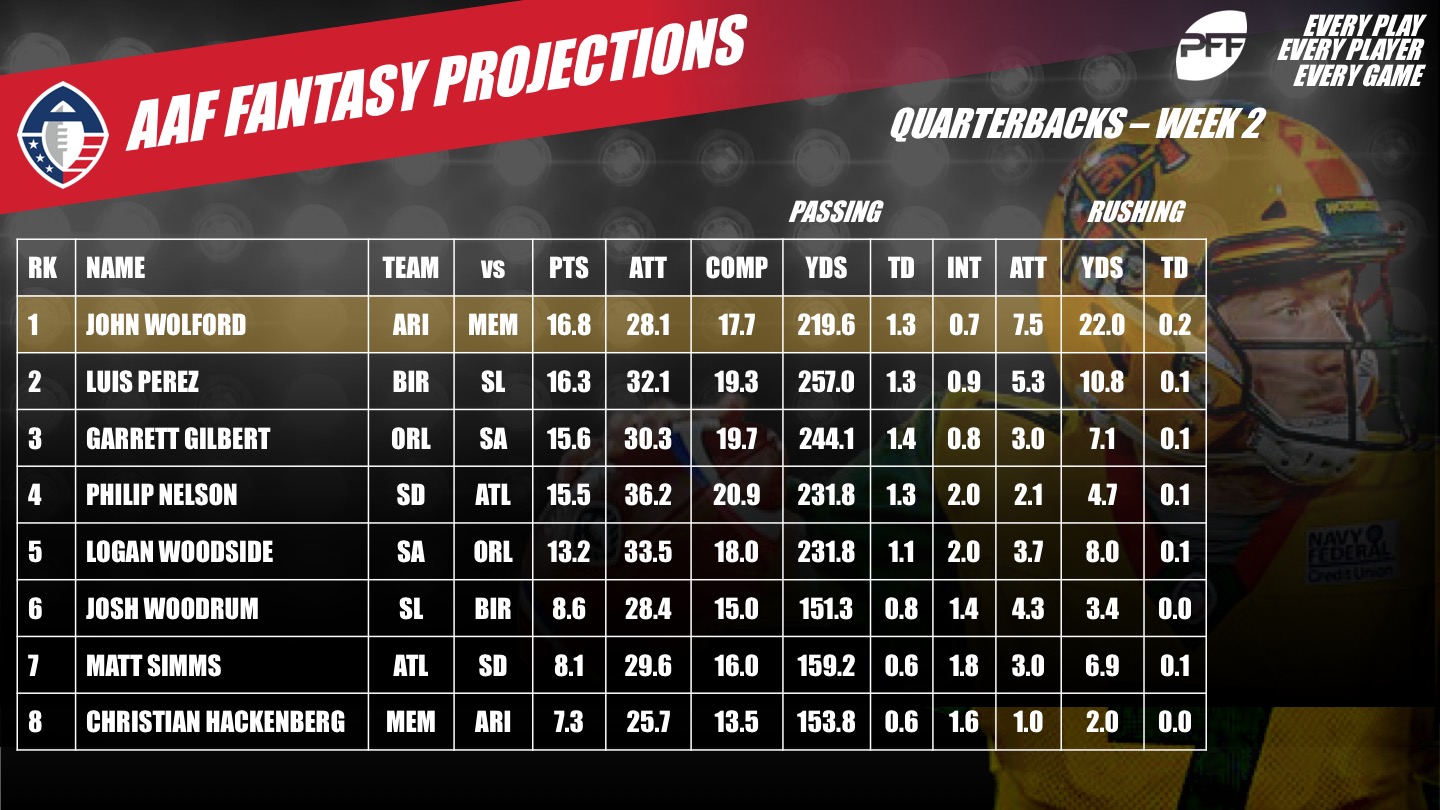 Last week’s top scorer leads the pack against Memphis. While the Express didn’t allow a touchdown pass to Luis Perez last week, he still managed 252 passing yards despite five drops from his receivers. Perez comes in as the No. 2 option with a plus matchup against the same Salt Lake squad that Wolford lit up last week. Garrett Gilbert isn’t a good bet to catch another touchdown this week, but he had a solid debut and should continue his productive ways against the Commanders. Mike Bercovici became an instant meme after getting crushed last week, but despite the sacks and interceptions, he figures to continue to pass the ball a ton. 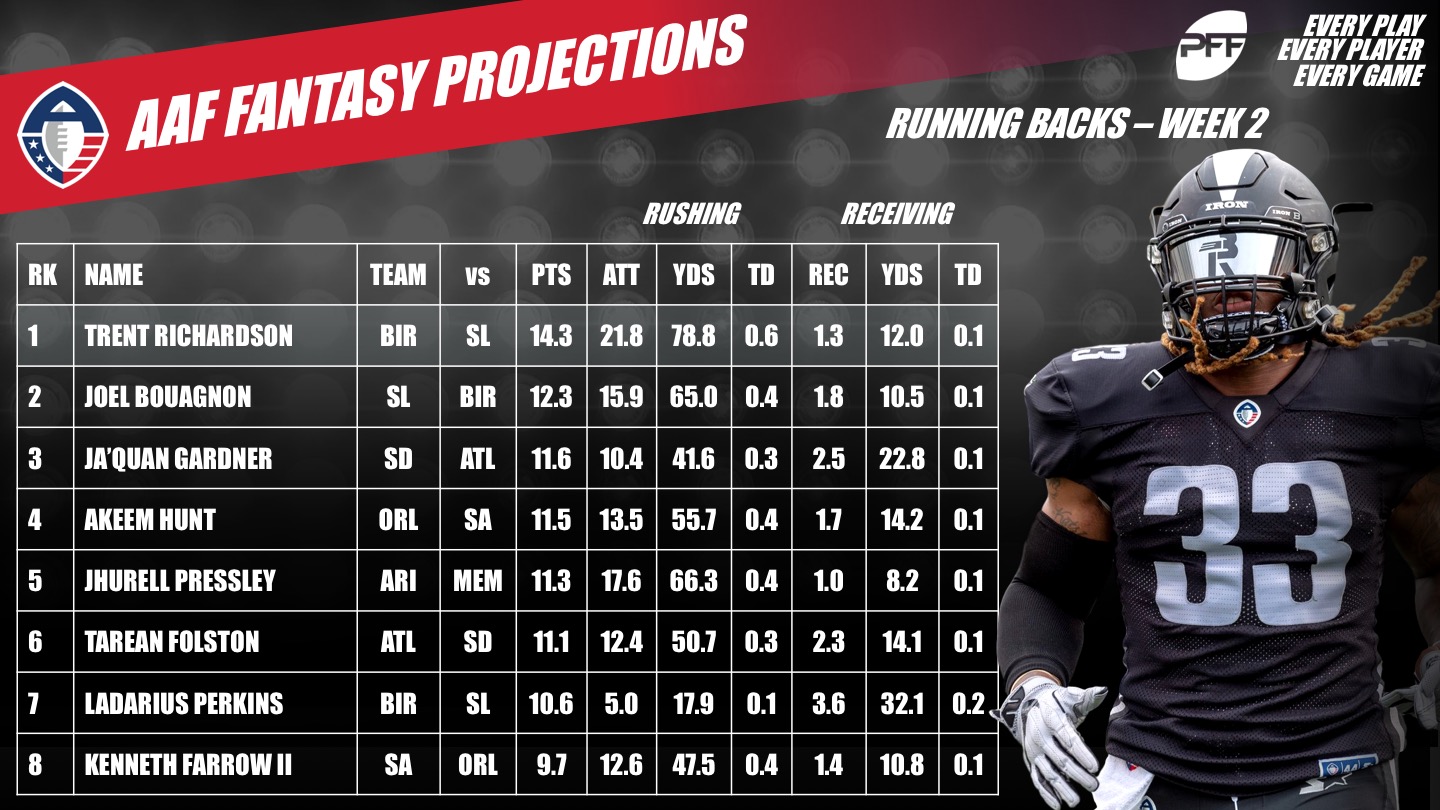 Trent Richardson didn’t have an efficient day on a per-carry basis, but he proved to be every bit of a fantasy RB1 with two rushing touchdowns. Joel Bouagnon was also inefficient with just 2.4 yards per carry in the opener, but he’s currently third in the league in carries with 16 and faces a Birmingham run defense that graded out as the second-worst in Week 1. It may be a bit of a surprise to see Ja’Quan Gardner at No. 3, but he’s a three-down option who gets to face a Legends defense that allowed 6.0 yards per carry last week. Akeem Hunt was one of the beneficiaries of that matchup and remains locked in as an RB1 play against the league’s lowest-graded run defense. Jhurell Pressley enters the week second in carries and will continue to see a healthy workload against the Express. 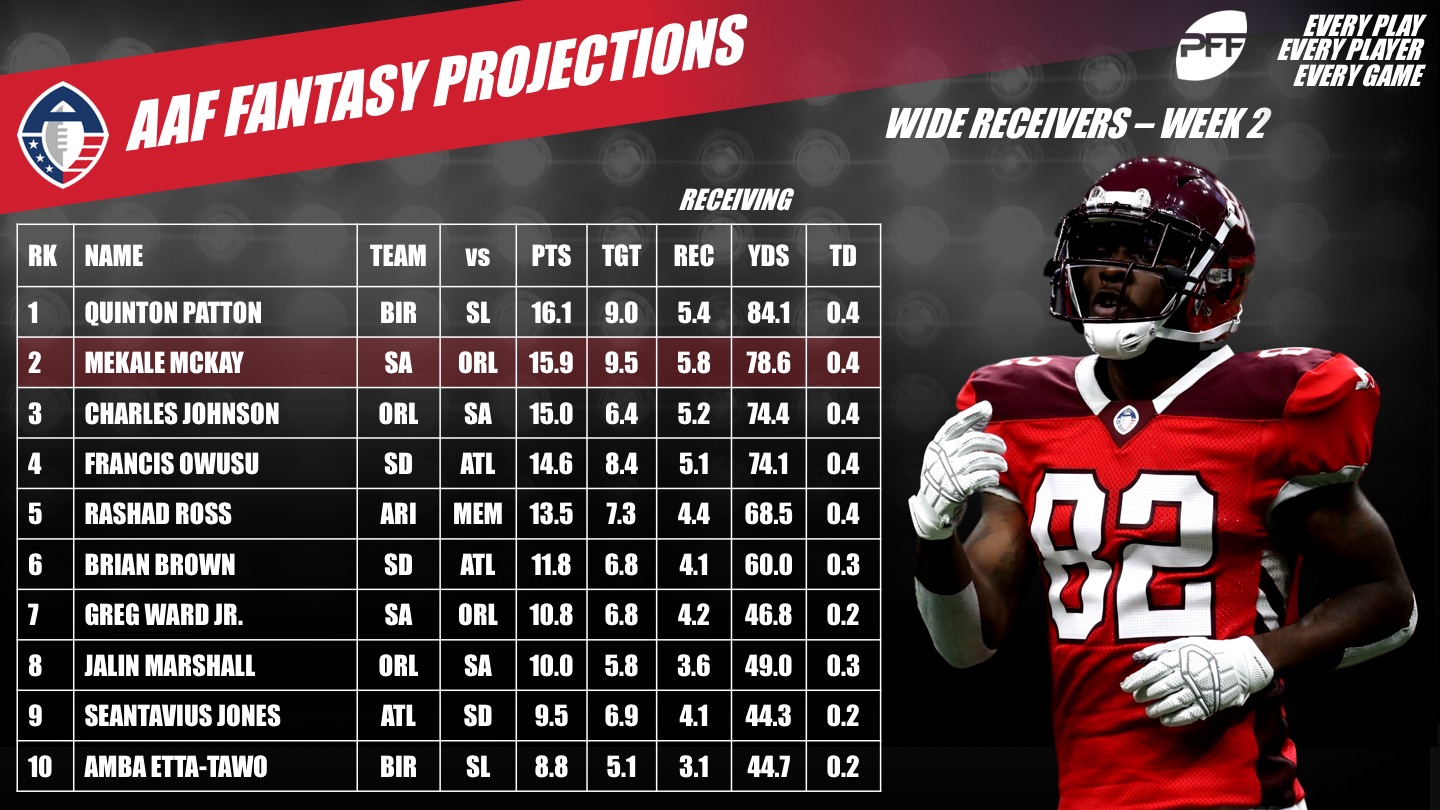 Wide receiver is a bit more challenging in AAF fantasy leagues than it is in the NFL because most teams used a fairly heavy rotation in the first week. But the benefit of what we do here at PFF is our data allows you to look beyond the box score to get a better sense of usage. When it comes to wide receiver, routes run is a better stat to use than targets. Don’t get me wrong — targets are important, but receiver routes run gives you a better picture of how the depth chart actually shakes out.

With this in mind, the names at the top should come as no surprise. Quinton Patton was one of just two AAF receiver to top 100 yards in the opener, and Mekale McKay was the lone wideout to see double-digit targets. Charles Johnson didn’t put up big numbers in Week 1, but he’s the top option in Orlando and should continue to see ample opportunities. Francis Owusu posted a fantasy dud in the opener, but don’t overlook him in Week 2. Rashad Ross was the top non-quarterback fantasy performer of Week 1. His big-play upside bodes well for continued success. 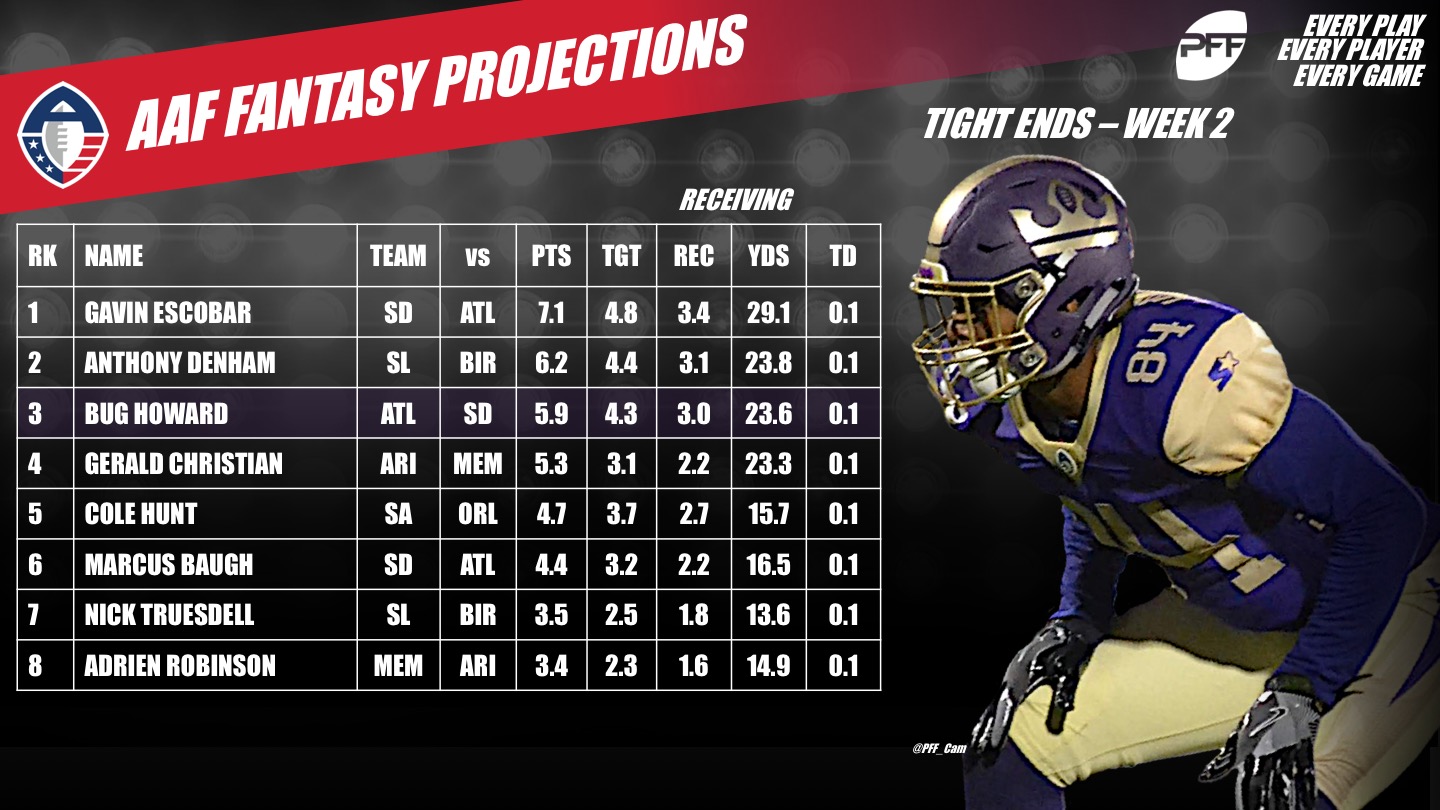 Yep. It’s ugly at tight end. Gavin Escobar owners can at least be happy with their option, as he finished second at the position in receiving yards last week. Anthony Denham led all tight ends in targets (7), catches (5), and yards (59). While he’s sharing the workload with Nick Truesdell, Denham’s volume makes him a very appealing fantasy option. Likewise, Bug Howard saw a healthy workload in Week 1 with five targets. Gerald Christian led the position in fantasy scoring thanks to a touchdown reception. Fantasy owners who drafted Thomas Duarte will want to note that Christian is the top fantasy tight end option in Arizona.