Who are the best fantasy football plays for building an optimal DFS lineup in Week 8 of the 2018 NFL season? As we do every Saturday, this piece brings you the DFS locks of the week.

Mahomes is the most expensive quarterback in DFS this week ($7,000 DraftKings; $9,200 FanDuel), but he’s still too cheap — especially on DraftKings. The Chiefs are massive 10-point home favorites against the Broncos with an implied total of 32. Mahomes is averaging over 30 DraftKings points per game.

Goff is in the same boat as Mahomes. His team is a big home favorite (9 points against the Packers) with a high implied team total (33 points). Goff is appropriately priced as the third-most-expensive quarterback on FanDuel, but he’s somehow the 10th-most expensive option on DraftKings.

It hasn’t all been pretty for Mayfield, but he is averaging 16.8 DraftKings points per game and 15.8 FanDuel PPG with at least one passing score in every game and at least 20 rushing yards in two of his last three — providing a decent floor. Mayfield’s Week 8 opponent, the Steelers, have given up the fourth-most fantasy points to opposing quarterback on the year.

Gurley is the lock of the week every week. With an implied team total of 33 as 9-point home favorite against a Packers defense that has given up five rushing touchdowns in their last four games — and over 140 rushing yards in two of their last four — it’s hard not to like Gurley once again.

The Steelers are 8-point home favorites against the Browns, and the last time these two teams met (Week 1), Conner touched the ball an absurd 36 times. He won’t see over 30 touches again, but it’s safe to project 20-25. He sees all of Pittsburgh’s goal-line work and consistently receives 6-8 targets per game, and his price hasn’t budged since Week 3.

Raheem Mostert, San Francisco 49ers (if Matt Breida is out)

Breida is on the doubtful side of questionable, and even if he suits up, Mostert figures to see sizable work in Week 8, as he paced the backfield in snaps last week (22). If Breida sits, Mostert becomes a no-brainer given his price tag ($3,800 on DraftKings, $5,600 on FanDuel). The Cardinals, his Week 8 opponent, are a bottom-half team in fantasy points per touch given up to running backs.

Green is easily my favorite wide receiver of the week and the first player I’m putting in cash lineups. Of players on the main slate, he has the best individual WR/CB matchup against the Buccaneers secondary which has given up the most fantasy points to opposing wideouts this year. Green has double-digit targets in three straight games and has topped 110 receiving yards in two of those three. 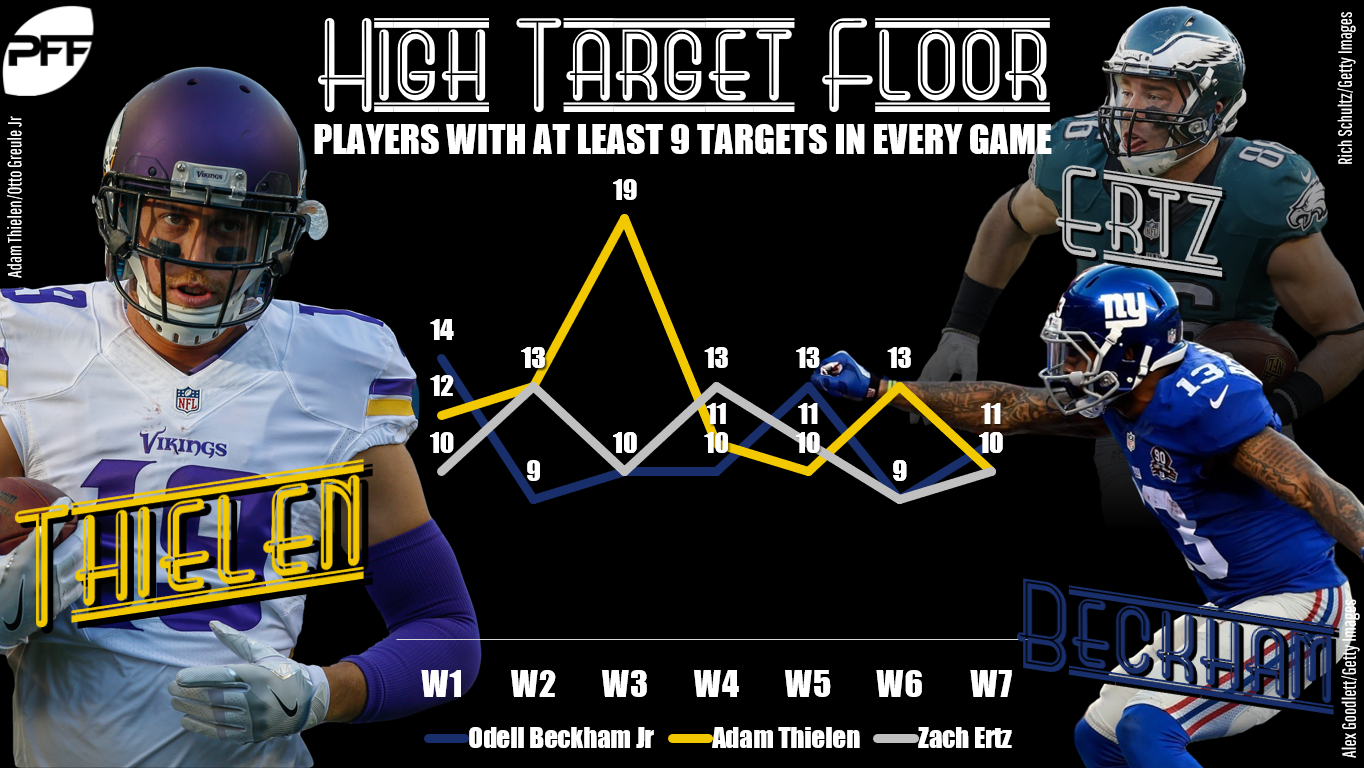 Beckham is a player I highlighted in my DraftKings cash game guide, where I noted that Josh Norman has up a passer rating of 138.0 against, allowing 77.8% of passes thrown his way to be caught for an average of 15.3 yards per reception. OBJ isn’t priced high enough, and let’s not forget: He has double-digit targets in all but two games this year (he had nine in both of those games), he has over 100 receiving yards in three of his last five games, and he has a touchdown in two of his last three.

We mentioned that Green has the best individual WR/CB matchup on the main slate, and his teammate, Boyd, has the second-best matchup — mostly against Tampa slot man M.J. Stewart, who has been dusted for 2.32 yards per route covered, most among all slot cornerbacks.

Golladay will draw primary coverage from Seattle’s Shaquill Griffin, who Jeff Ratcliffe noted has given up 25 catches on 36 targets this season. Griffin is our No. 74-graded corner (out of this week’s 84 starters), and Golladay been on the wrong side of touchdown luck in recent weeks with several big plays called back. He’s due for a huge game.

If you played Week 8 100 times, Kelce would finish as the top overall tight end at least 80 of them. The Broncos were eviscerated by Chiefs tight ends in Week 4, ceding nine catches for 137 yards and a score. They are a bottom-half team in terms of fantasy points per target given up to the tight end position despite facing several teams that are not strong at tight end, including the Cardinals, Rams, and Jets in each of their last three games.

Njoku’s floor has been pure since Baker Mayfield took over as the starter. He has at least 50 yards in four straight games and a touchdown in two straight. He also has at least one big play (20-plus yards) in three straight games. Njoku’s price is creeping up, but not enough — especially with a Week 8 date versus the Steelers, who have given up the third-most fantasy points to tight ends.

With no Amari Cooper in town, Cook should soak up even more looks, which is a great thing considering he already paced the team in targets. The Colts, his Week 8 opponent, have given up the eighth-most fantasy points to tight ends this year.