Who are the best fantasy football plays for building an optimal DFS lineup in Week 15 of the 2018 NFL season? As we do every Saturday, this piece brings you the DFS locks of the week.

Roethlisberger averages over 300 yards and 2.7 touchdowns per game at home. Playing at home this week, Big Ben faces the Patriots — who have allowed the 10th-most fantasy points to quarterbacks — in a game with the highest over/under on the slate (52). 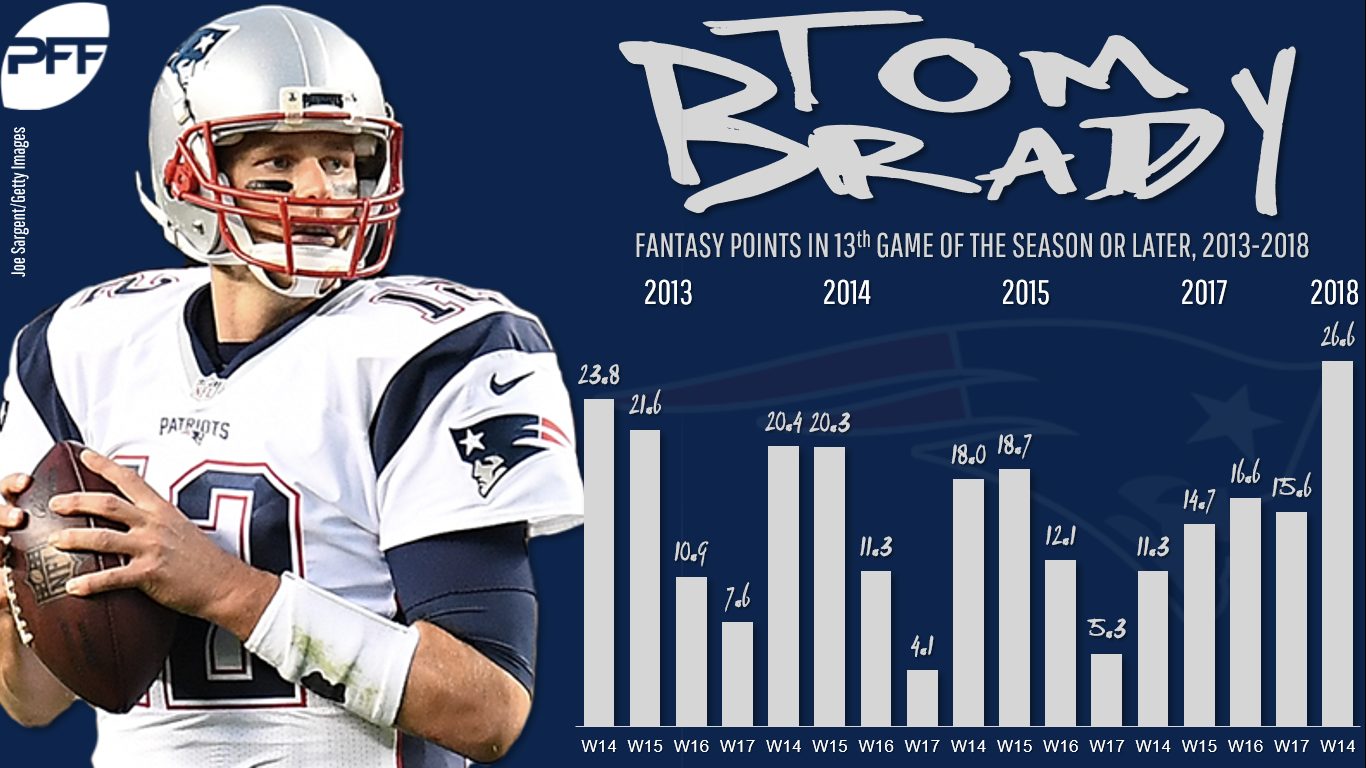 Brady will be opposite Roethlisberger in the should-be high-scoring Pats/Steelers game, and Pittsburgh has allowed the 11th-most fantasy points to opposing quarterbacks. Brady is fresh off a performance as the top-scoring quarterback in fantasy.

Still serving as Baltimore’s starter, Jackson gets a plum Week 15 draw against the Buccaneers, who have allowed the fourth-most fantasy points per game to quarterbacks. Jackson has scored at least 17.5 DraftKings points in each of his four starts while averaging 19.8 points — over 3.3x value on his salary.

Elliott is one of the surest bets on the entire slate, not just at the running back position. Elliott’s usage over the last four weeks is absurd. He’s averaging 32.5 touches per game in the last month and there are no signs the high usage is going to stop any time soon.

With Odell Beckham Jr. ruled out once again for Week 15, the already volume-secure Barkley is once again locked in as New York’s best weapon (by far). It’s not a great matchup against the Titans, but in an overall tough week in DFS, Barkley belongs in as many lineups as possible as a workhorse.

Mixon shined for the Bengals last week, touching the ball 31 times for 138 total yards and a score. He this week faces a Raiders defense that has allowed the most rushing yards against (1,598) — and even though that particular figure has a lot to do with the fact the Raiders are often trailing, something that isn’t guaranteed to happen this week — they still allow a healthy 4.9 YPC against. Mixon is a great play.

James Conner is trending toward missing Week 15 (check his status), and if that’s the case, Samuels becomes a DFS lock for the second straight week. He saw a needed price bump across the industry, but Samuels is still a strong value play with 18-22 touches in his range of outcomes, including five-plus high-value receptions. The Patriots have allowed the 10th-most fantasy points per touch to opposing running backs this year.

Thielen has the second-best individual WR/CB matchup among this week’s main-slate wideouts. He’ll primarily face Miami’s Bobby McCain, whose PFF grade of 54.6 is fifth-lowest among this week’s starting slot corners.

Smith-Schuster or Antonio Brown? That’s the question you’ll likely have to get right this week. I’m choosing Smith-Schuster, who will avoid coverage from Stephon Gilmore. Smith-Schuster is cheaper, too, and he’s on a recent hot streak with over eight receptions and over 100 yards in three of his last four games. 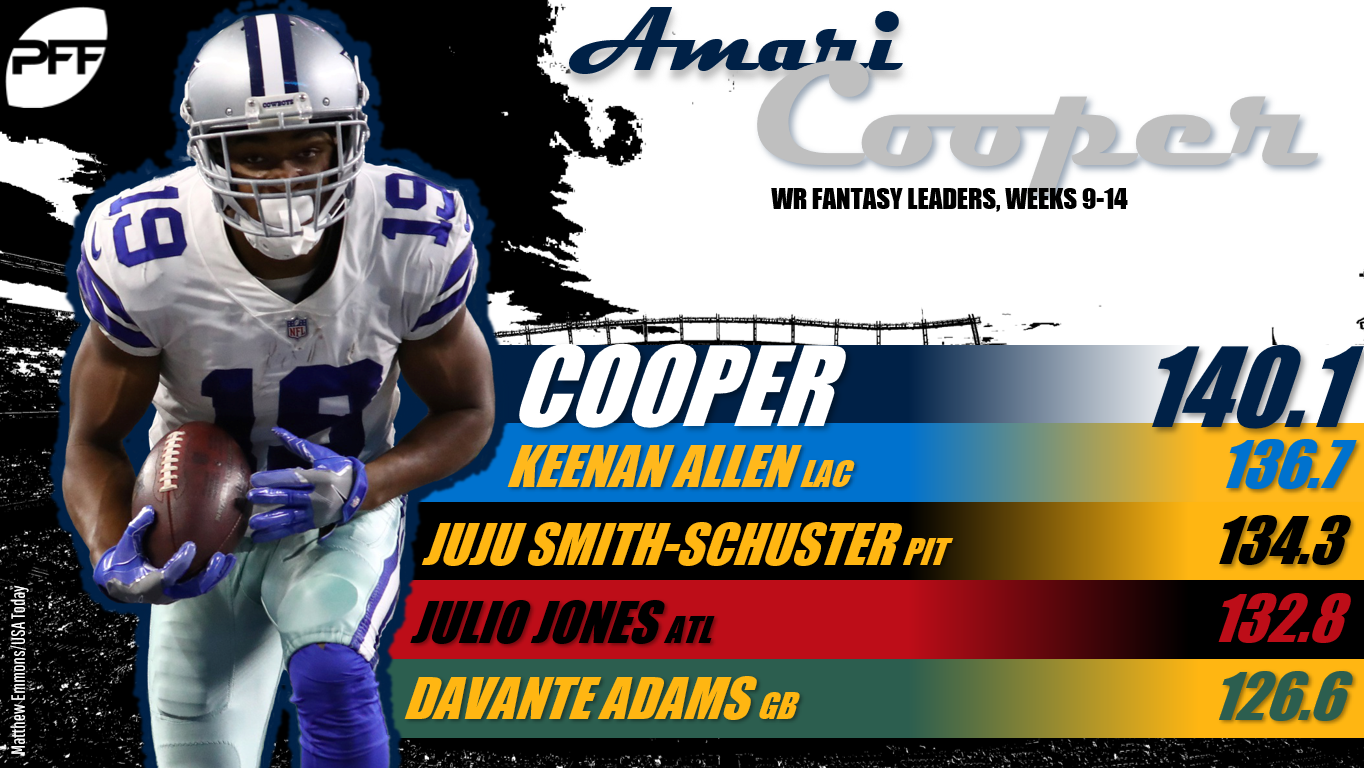 Cooper, fantasy’s No. 1 wideout since being traded to Dallas, is the eighth-most-expensive wideout on DraftKings and the No. 16-priced wideout on FanDuel (!?). Aside from the mispricing — especially on FanDuel — Cooper faces a Colts defense that ranks in the bottom half of the league (21st overall) in fantasy points per target allowed to wideouts.

We have Gabriel projected as a top-10 value on both FanDuel and DraftKings — including the No. 1 projected wideout value on DraftKings. He’s super cheap, and with at least seven targets in four straight games, Gabriel promises solid volume potential against the Packers, who have allowed the fourth-most fantasy points to receiver this season.

Ebron faces the Cowboys in Week 15, who have allowed five touchdowns to tight ends over the last six weeks. That bodes well for Ebron, who has 13 touchdowns in 13 games this year — most among all tight ends.

As I’ve written numerous times this week, Gronkowski is in a great spot against Pittsburgh, a team he averages over 110 yards and 1 touchdown against in his career. While how Gronk played against Pittsburgh in 2010 has no bearing on his outlook in 2018, he’s back on the touchdown track with two scores in the last three weeks, and this Steelers/Patriots game is set to be the highest-scoring game of the weekend.

Kittle remains a stone-cold lock with at least nine targets in every game since Nick Mullens took over as the starter. The Seahawks have been stingy against tight ends this year, but Kittle is matchup-proof, so don’t let the matchup scare you.