Fantasy Football: Why the Atlanta Falcons’ passing game is being undervalued

The Atlanta Falcons have been a source of strong fantasy football production for many years, and the likelihood of them repeating that feat under new head coach Arthur Smith remains high. Even after trading away star wide receiver Julio Jones, the team has players being undervalued in fantasy drafts — Mike Davis and Russell Gage among them — but also maintains elite firepower with the Calvin Ridley leading the way.

This is the type of offense fantasy football players should be targeting, as there is a lot of value to be had here.

Everyone is well aware of how good Ridley is. For the most part, he operated as Atlanta's No. 1 wide receiver last season with Jones suiting up only nine times. He managed to secure a WR5 finish by pulling in an absurd 90 receptions for 1,374 receiving yards across 15 games. Julio Jones’ departure should excite anyone with Ridley shares because Ridley is line to receive a massive target share.

Jones saw an absurd 193 targets and 33.4% target share in 2015, and while it's probably not fair to expect similar numbers from Ridley, he is destined to take over a similar workload that’s now vacated, even in a new offense.

Ridley has already proven he can handle the No. 1 wide receiver role and do it with elite effectiveness. His 137 targets and 23.8% target share last year proved it. The target share jumps up to 25.2% if we remove the Week 9 contest he missed.

He has the talent and now the required workload to put together an enormous season. He absolutely maintains WR1 upside and is fairly priced. For my money, Ridley is the best bet to lead the NFL in receiving yardage this season.

Even though he has yet to play a down in the NFL, Pitts is viewed as a top-five tight end and the second-most valuable piece in this extremely underrated offense. However, there is a ton of risk and bust potential here, as much as it pains me to say.

Going back to 2010, only 20 rookie tight end have topped the 50-plus target mark and just one — Evan Engram — eclipsed the 100-plus target mark. Not a single one of these players had 800 or more receiving yards. Engram once again led the way, racking up 722 yards.

The issue? Pitts is being drafted as the current TE4. Last year, the TE4 — Engram again, coincidentally — accumulated 102 targets. Each of the top-nine players saw 85-plus targets. Even if we look at Smith’s offenses over the past two seasons, TE1 Jonnu Smith in Tennessee was targeted only 63 and 44 times, and the position saw a mere 235 targets.

While Pitts should see a tremendous amount of work this season and is likely to set records across the board for the position, there is a ton of inherent risk involved at his price tag. His current ADP takes none of that into account, as he is priced at his peak. That leaves a lot of room for disappointment.

Of course, you could make the case Pitts is really a glorified wide receiver, and that may pass, but history is not on his side. With his ADP being so rich, it might be best to let someone else take the plunge.

As it stands right now, Davis is the cheapest potential bell-cow running back in the NFL. No player has accumulated more rushing attempts than Derrick Henry’s 681 over the past two seasons, and while Davis won’t reach that mark under his new head coach — formerly the Titans' offensive coordinator — he does offer much more upside as a receiver than Henry. The precedent for bell-cow usage has at least been set under Arthur Smith.

A handful of Falcons players offer tremendous value, but maybe none more than Davis. He finished as the 12th-highest scoring running back in PPR leagues (208.5 fantasy points) last season. If we remove Weeks 1 and 17 (he didn’t touch the ball), Davis leapfrogs all the way to RB7. And he managed to accomplish that while ranking 20th in rushing attempts (165) and fifth in targets (67) among running backs.

Davis is a two-way threat who can catch the ball just as effectively as he can run it. Now, there is a great shot for him to eclipse his 2020 usage totals.

The Falcons have absolutely no threats to his workload at his position. He is basically priced at his floor and is one of the best ADP values in fantasy football drafts this season. PFF’s fantasy projections also have Davis outplaying his price with a projected RB17 finish. Draft him while the price is still cheap.

While I declared Davis might be the best value on this team, Gage actually is. He is currently being priced alongside No. 3 wide receivers or low-end WR2s who have yet to produce decent numbers. That seems like a very fair price for a guy who rotated between the WR2 and WR3 job for Atlanta last season and secured a WR37 finish with 175.5 fantasy points.

If we look at only Gage’s performances in Weeks 14-17 with Julio Jones sidelined, he skyrockets to a WR17 finish. Of course, that small sample probably wouldn’t project well over a 17-game schedule, but it’s a clear indication of what he can do as he moves up the team’s pecking order.

It probably isn’t wise to expect a large jump in targets or target share for Gage following the addition of Pitts acting as a pseudo-receiver at times, but Gage’s 18.75% target share from 2020 is a repeatable number.

We’ve reached the final starting piece of the undervalued trio and an underrated offense in general. Ryan is a boring, meticulous quarterback who offers absolutely zero upside or production as a rusher. Yet, he’s still landed among the highest-scoring quarterbacks more often than not: 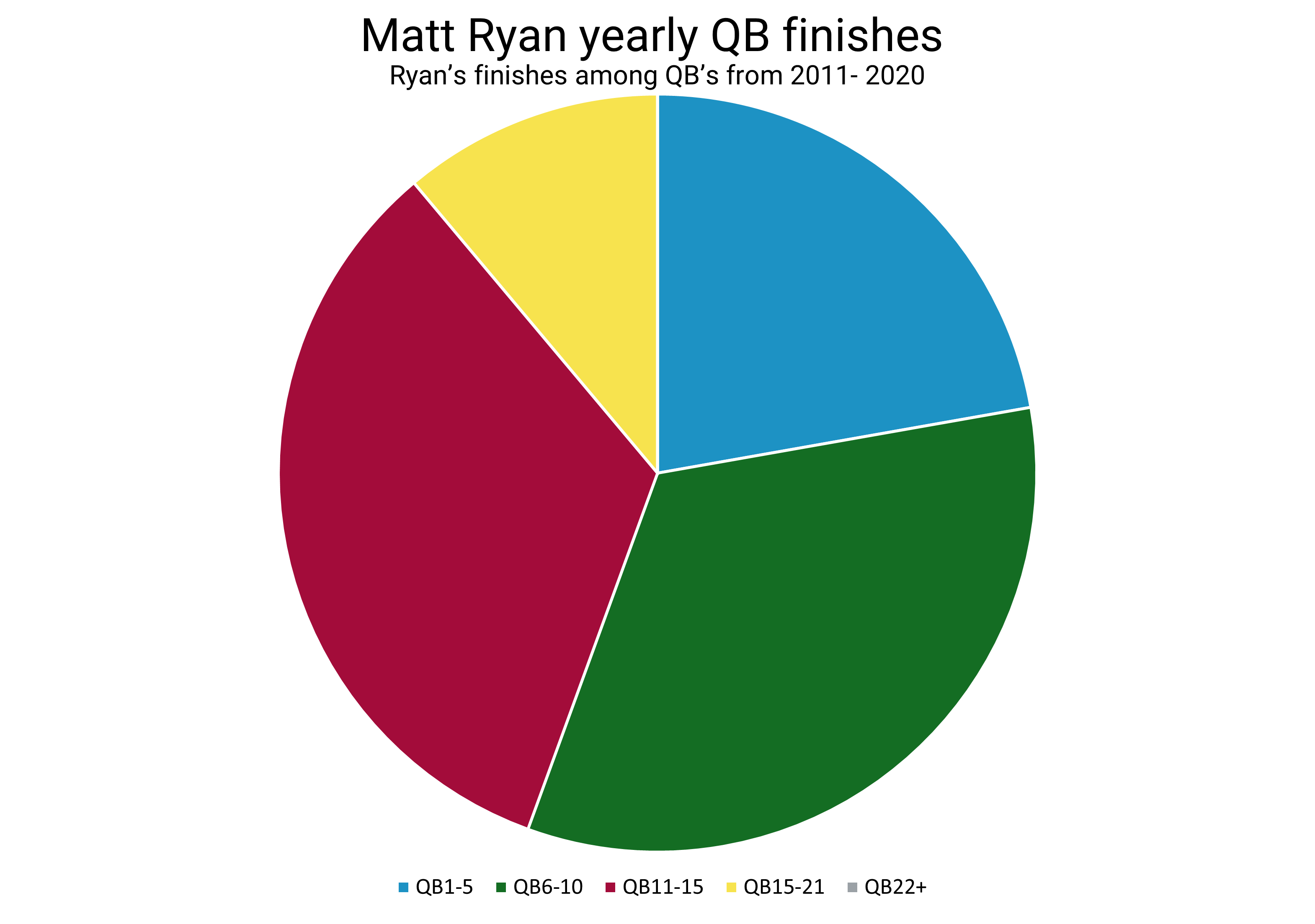 He’s never finished lower than the QB18 spot in fantasy. It’s hard to find many options that are as consistently safe and productive as Ryan. Not to mention, his new head coach was able to resurrect Ryan Tannehill‘s career. While Tannehill has the mobility Ryan could only dream of, he’s been able to secure finishes as the QB9 and QB22 (12 games played), mostly by way of passing.

There is one more reason to target Ryan and this passing game as a whole: the Falcons’ defense isn’t great. Last season, the unit allowed the eighth-most touchdowns in the NFL, and it could fall within the same range in 2020. If that's the case, it’s fair to expect some shootouts coming in the dome, which is a major positive for this passing attack.

We’ve now entered deep sleeper territory. Like all teams, the Falcons need a No. 3 wide receiver, and the leader in the clubhouse is Zaccheaus. He’s a relatively unproven player with only 54 career targets, but his quarterback threw the most passes in football (626) last season. Someone has to be on the receiving end of those, and while Zaccheaus is way down in the pecking order, he comes with a free ADP and could have some legitimate value in the event of an injury.

He did accumulate 53.4 fantasy points last season in 11 games and had a decent 14.60 average depth of target figure.

Hurst is not worth a draft pick, but he could become a legitimate tight end streamer if the Falcons do experience bad injury luck. He already has experience operating as the team’s top tight end, seeing 85 targets in that role in 2020. Obviously, Pitts is going to be the thorn in his side production-wise, but Arthur Smith's Titans offense did toss 50 and 21 targets to its backup tight end over the past two seasons.

That’s not exactly thrilling usage, but there is a scenario in which Hurst becomes a usable fantasy football option. That just isn’t the case right now.

There are many reasons to be excited about the Falcons’ offense as a whole. This is certainly a team to target, especially when considering which QB/WR or QB/TE stacks to pair. This team has historically thrown the football a ton, and Ryan has produced many great fantasy results for himself and his teammates.

Many of Atlanta's players present great value at their ADPs with low bust potential. Plus, this is an offense set to potentially improve under new head coach Arthur Smith. If the unit is capable of being any more efficient like the Titans have been the past two seasons, there really aren’t any limits to what's achievable.