Everywhere you look, discussion on best ball fantasy football formats rages during the dog days of summer. It is the perfect preparation for the re-draft season coming in August. PFF has you covered all the way up to the regular season kickoff with our best ball draft kit that focuses on providing actionable information for the 2021 season.

Sometimes, taking a step back and reevaluating historical data can provide fresh insight on how to approach future opportunities. Underdog’s inaugural Best Ball Mania kicked off in 2020, and the 2021 rerun provides a similar framework. The only real difference is a lot more entries will be involved, as the 2021 entrant cap sits at 155.5K rosters — almost five times the number of entries in 2020. Below is the structure from 2020 that we will be using to put together a framework for how we should approach this massive guaranteed prize pool (GPP) contest in 2021.

We are currently in the thick of drafting early and often. Mandatory minicamp is causing numerous fluctuations in players’ average draft positions (ADPs), but depth charts aren’t as clearly defined as they will be after Week 3 of the preseason.

There are numerous theories for which time period offers the easiest path to advancing while also allowing the best pieces to be put in place to finish at the top of the leaderboard. The earlier drafts tend to be filled with sharper players who have a strong understanding of optimal roster construction and rarely deviate far from consensus ADP.

As we get closer to the NFL season, more casual players tend to get involved in a few best ball drafts, but the tradeoff is that ADP has become more efficient. Depth charts and roles have become more clearly defined, so those with early insight or understanding of the expected usage for players no longer have a leg up on the rest of the competition.

As the graph below suggests, the time difference and tradeoffs on either side don’t highlight a strong correlated benefit to drafting at any particular time period. Draft early and draft often, or draft late and often, but there isn’t any distinct advantage to doing one or the other. 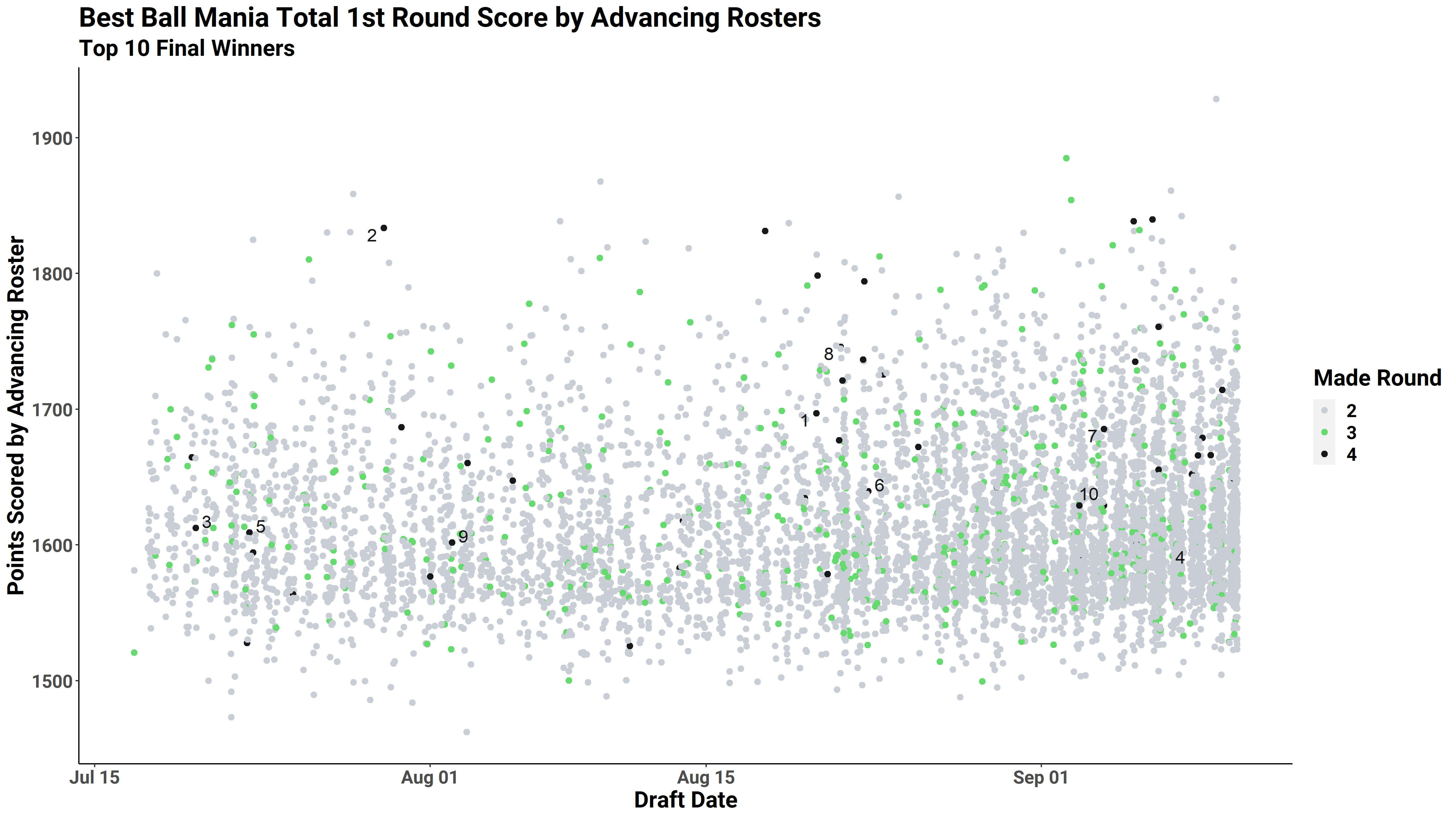 Stacking is the easiest way to correlate high-end fantasy performances to multiple players from the same team. At this point, that strategy is common practice across best ball teams, with only 7% of teams having no teammate option paired with a quarterback from their roster.

Oddly enough, the teams that had only one quarterback stacked with a teammate saw their percentage of total rosters increase in the final round. This highlights that numerous stacks aren’t as important as hitting on the right stack. Although the overall edge of simply stacking is basically gone, who to stack and at what ADP are the keys to success. 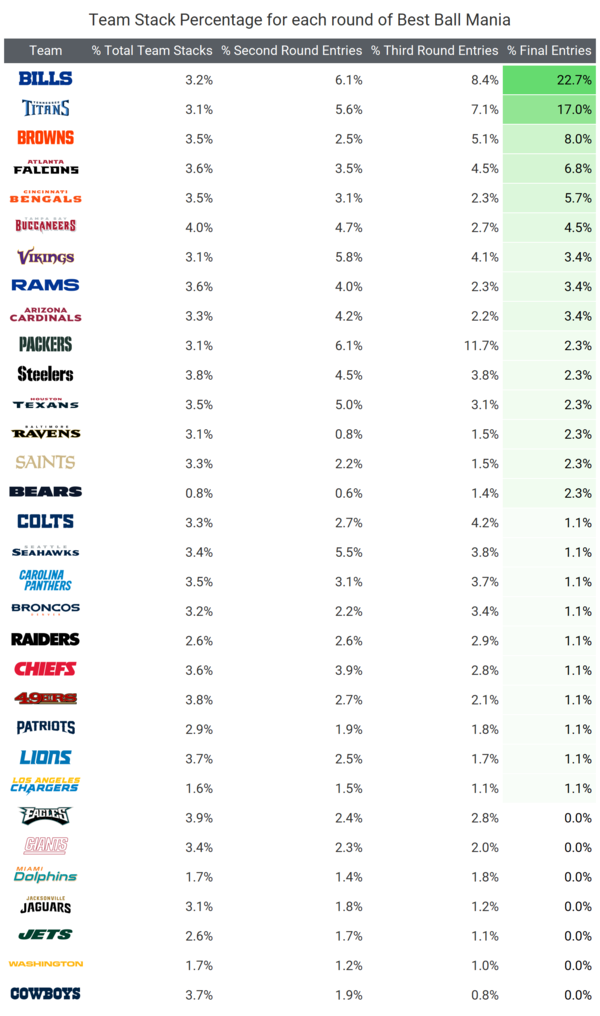 Stacking at a team level played out exactly as expected in the 2020 version, as each team had a similar percentage of stacks built across all entries in the first round. Rosters that advanced to the final round were heavily concentrated across three teams, with almost 50% of the final rosters having stacks from the Buffalo Bills, Tennessee Titans or Cleveland Browns.

Quarterback Josh Allen went from having the eighth-highest ADP among quarterbacks in 2020 to finishing atop the position in fantasy scoring. Ryan Tannehill and Baker Mayfield had ADPs in the bottom half of the quarterback range, so identifying the quarterbacks in the teen range who can make leaps into the top 10 should be the focus at that position. Of course, also hitting on this year’s version of Stefon Diggs is the surest path to the top of the leaderboard, but doing that is much easier said than done. Looking at what wide receivers are misvalued based on PFF projections is an easy spot to start, along with identifying the best teams to stack.

ROSTER CONSTRUCTION WIN RATES BY ROUND

Roster construction is all the rage at this point in the offseason, and for good reason. Outside of simply choosing the best players, it’s the one area fantasy football players can directly control. The majority of best ball players took a balanced approach that slightly overperformed the percentage of total rosters based on the makeup of the final round.

Roster construction depends heavily on selections of the first three to six picks in the fantasy draft. Opening up with a robust running back strategy that results in four running backs with nine wide receivers and three tight ends filled in at the backend of a draft is an underrated construction that significantly outperformed the field. Flipping to three quarterbacks and going with two tight ends but sticking to this make-up also paid off long term, so it depends on how comfortable you are with waiting to select the tight end or quarterback position.

The 2-4-9-3 and 3-4-9-2 constructions will be what I attempt to build based on draft position for the remainder of my Best Ball Mania lineups. Going three or more quarterbacks and three or more tight ends simply leaves rosters devoid of enough players at the running back and wide receiver positions. One injury could completely derail a position group, so having numerous shots at running back and wide receiver is the strategy that saw the most success in 2020.

Going completely off the rails and trying out a unique roster construction didn’t pay off in 2020. Although some unique builds saw initial success, next to none outperformed their initial percentage of entries by the end of the season. The one approach that could work is selecting a top-end tight end early and completely punting the position outside of that pick, thereby taking a zero during the bye week but opening up more opportunities at other positions. It is a risk because of injury, but having a top-end selection suffer an injury will most likely derail your chances anyway, so taking an insurance pick isn’t a viable strategy in this format, either. Go big or go home has to be the mantra for players hoping to win the top prize of the Best Ball Mania.

FIRST SELECTION AT EACH POSITION FOR TEAMS THAT ADVANCED

Roster construction is heavily dictated by the position of first pick and inevitably what direction you choose to go with that pick. Last year, a majority of teams that advanced to the second round used their first-round pick on a running back. And most of those teams waited until the second or third rounds to select their first wide receiver, essentially going robust running back to start. The table below shows what round was the first time a position was selected for teams that advanced into the second round of the Best Ball Mania.

Some of this is heavily influenced by certain players’ performance at their ADP last year and if injuries derailed any rosters. Avoiding the tight end and quarterback positions until late in the draft isn’t the most appealing strategy to talk about, but it is definitely the most effective. For as much love and discussion as zero running back gets, it creates the perfect opportunity to let others try to buck the trend of winning with that strategy. With my money, I am targeting running backs to start all day and twice on Sundays.

The biggest mistake newer best ball players make is getting too cute when building rosters. It still pays to stack, but hitting on the right team to stack is the key to advance out of the first round of Best Ball Mania. Selecting a quarterback or backend wide receiver simply to complete a stack isn’t the spot to gain an edge. Completing the right stacks in the middle rounds of the draft is what leads to the most success.

After the initial round, needing to rely on one week of performances makes the rest of the tournament structure inherently random. Simply focusing on optimal roster construction that fills in holes and gaps at weaker positions is the best way to go. Don’t overthink or reach for players too much, and make sure to round out rosters with wide receivers or running backs while selecting just three quarterbacks and tight ends at the most.