I (re-)learned a lesson last season: Numbers over narrative. Believe in the numbers.

Each offseason, I do a pair of pieces on teams that saw their cumulative fantasy point total rise or fall by the greatest percentage from the season before, in search of regression candidates. (Here’s last week’s, on teams due to fall.) A team that sees its fantasy point total drop by, say, 20 percent from one year to the next will almost invariably rise in Year 3. (In fact, of 20 teams that have dropped by at least 20 percent from one year to the next since 2006, only three have fallen again in Year 3, and on average see their totals rise by 22 percent in that third year.)

Clearly, it’s not universal, or those three exceptions since 2006 wouldn’t exist. But you’ll generally be successful if you bet on regression in that way. And I neglected that rule a year ago.

The team that saw its production fall off by the greatest percentage from 2015 to 2016 was the New York Jets, which went from a big year out of Ryan Fitzpatrick, Brandon Marshall, and Eric Decker to disappointments from the first two and injuries from the third. They dropped by 25 percent from Year 1 to Year 2. Of course, last offseason was the one in which the Jets let all three of those big names go, had Quincy Enunwa go down to injury, and entered the season with veteran retread Josh McCown as its No. 1 quarterback. They looked like they were tanking.

The numbers win out a lot. Over the since-2006 sample, it’s solidly trackable:

2017 was rough for fantasy production. 13 different teams saw their totals drop off by 10-plus percent, the most such teams in the data set. Below are the five biggest fallers — aka, the five biggest candidates for positive regression in 2018. Want some strong evidence that this process works? Of the five teams below, four were in last year’s piece of teams most likely to fall off in production, and all five dropped by 10-plus percent. In other words, that piece last year had a success rate of 100 percent, and an extreme success rate of 80 percent.

(“Teamwide fantasy point total” is for offensive players only — no kickers or defense. All numbers are for standard scoring.) 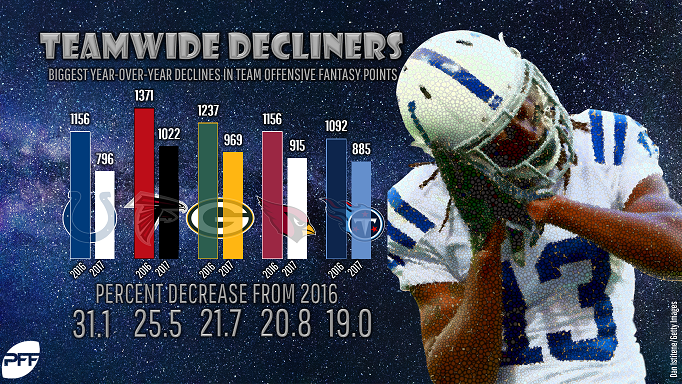 The Colts dropped off by almost one-third of their fantasy points last year, the seventh-biggest drop in the sample and the worst since 2011, when … well, the Colts topped it. The season-long of Andrew Luck is obviously the biggest contributor to that, but injury and inconsistency on Donte Moncrief’s part contributed as well. And the offensive line, which has been the Colts bugaboo since forever, allowed Jacoby Brissett to be sacked a league-leading 52 times, six more than second place.

How it could get better: Luck’s return is clearly the key. If he comes back and is more or less what he was before injury, the Colts will be a fairly safe bet to improve, especially with improvement on the O-line this offseason. Frank Gore held his own during his time in Indianapolis, but the combination of Marlon Mack, Jordan Wilkins, and Nyheim Hines (plus Robert Turbin?) should be able to approximate what Gore offered.

On top of that, the Colts remain a poor (if I’m speaking kindly) pass defense, which means there’s every chance the team ends up in plenty of shootouts. The improvements here are pretty clear.

The Kyle Shanahan-to-Steve Sarkisian transition as offensive coordinator does a lot of the work here, but simple luck did a lot as well. Julio Jones scored only three touchdowns despite 143 targets, the worst scoring rate by any wide receiver with 100-plus targets. Matt Ryan tied for the second-best PFF grade but was only fantasy’s No. 14 quarterback.

How it could get better: Jones should most certainly find the end zone more often than he did in 2017. Ryan’s luck pendulum should swing the other way as well. Calvin Ridley replaces Taylor Gabriel in the offense, which at the worst should be a wash and could be a big positive bump. And Austin Hooper has sneaky value as a potential tight end breakout.

Once again, credit for this goes to an injured quarterback. The Aaron Rodgers-to-Brett Hundley drop has got to be one of the biggest single drops from starter to backup a team can make. With Jordy Nelson either not gelling with Hundley, hitting the age wall, or a combination of the two, the team didn’t offer as much at receiver as in the past, while Martellus Bennett fell flat at tight and the team’s group of running backs struggled to establish a lead guy.

How it could get better: Just as boring as Indianapolis: Rodgers needs to come back healthy. In good news for the Packers, this seems a much more sure thing than Luck is for Indianapolis. Get him back and 100 percent and the rest should fall into place, even as the Green Bay receiving corps is as unsettled as it’s been in a long time.

Carson Palmer played only seven uninspiring games before being lost to injury. David Johnson played only 46 uninspiring snaps before he was hurt. John Brown and Jaron Brown struggled with health and productivity, and the team didn’t get much out of tight end. Basically, it was the Larry Fitzgerald Show in Arizona in 2017, and while he’s still great, he was far from enough.

How it could get better: Every year, there’s a team that wants to test this. Last year it was those Jets. This year, here it is. With Palmer and Bruce Arians both retiring, both Browns moving on in free agency, and another year on Fitzgerald’s legs, the Cardinals could struggle to improve. That said, a healthy Johnson would be leaps and bounds better than the Chris Johnson/Adrian Peterson/Kerwynn Williams slog the Cardinals struggled with a year ago, and Sam Bradford-if-healthy or Josh Rosen-if-starting at least have the potential to outproduce Blaine Gabbert and Drew Stanton. 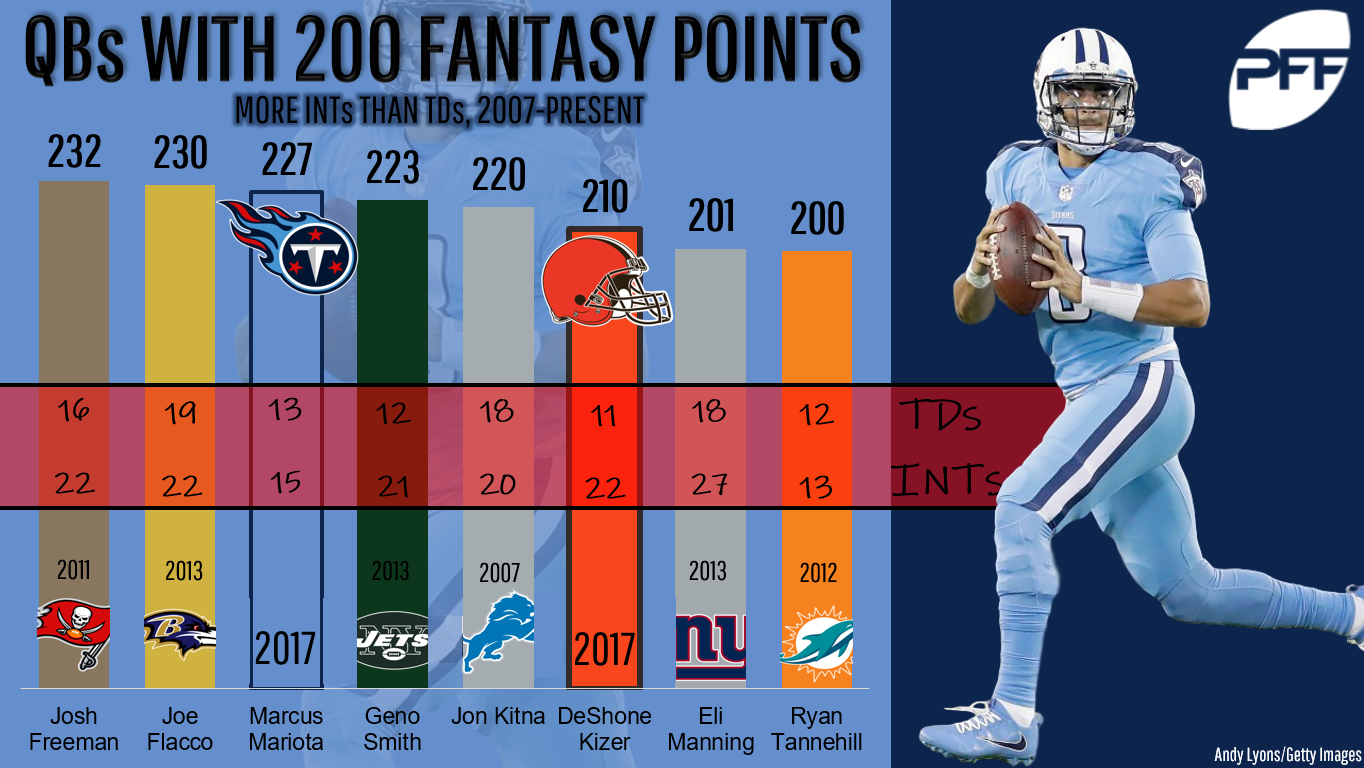 Marcus Mariota went from 26 touchdowns and 9 interceptions in 2016 to 13 and 15 in 2017. He bumped up his rushing touchdowns from 2 to 5, which meant his overall fantasy production only dropped by 3.4 points per game, but still that ratio sprinted in the wrong direction. DeMarco Murray struggled to repeat his huge 2016, while Eric Decker didn’t impress in his return from injury and Corey Davis struggled as a rookie. Delanie Walker and Derrick Henry were fine, but over all this is a team that had no real business making the playoffs.

How it could get better: In a way, I’m thankful for the Cardinals being up there and at least making this article a bit of a challenge, because the other four teams feel like sure things. But hey, that’s why numbers work. Mariota virtually has to improve, and even if he doesn’t, his supporting cast (with Dion Lewis replacing Murray and Davis likely to improve in Year 2) should make him look better. The Titans feel safe for decent improvement.