Predictions can be hard, especially about the future. Even those who have dedicated their lives to draft analysis, such as the scouts in NFL front offices and outside draft prognosticators, are often wrong. All the best among them can do is tilt the odds in their favor and then hope over the course of several picks those favorable odds translate into better talent.

A big problem with most evaluations isn’t the expertise of the evaluator but the ability of those on the outside to parse how the final grade was determined. Most draft profiles include written analysis and reference traits seen on film and stats accumulated through college careers, but the process of how much weighting is given to each factor and how they all come together into a comprehensive, single number is, at best, somewhat opaque.

In this analysis of 2021 NFL Draft prospects at the wide receiver position, I’m going to detail the quantitative process behind the results, including the importance of different features and how measurables, workout metrics and production markers all blend into a single prediction. In this case, the prediction will be focused on fantasy football results, specifically the number of top-12 weekly finishes at the position over the prospect's first three NFL seasons. We could extend the window further to cover a player’s entire career, but the point in the real NFL draft and the fantasy rookie counterparts is to see a return on investment earlier rather than later.

This analysis will cover all the 2021 wide receiver prospects on the PFF Top-300 Big Board, using their Pro Day number and production metrics to forecast fantasy success.

This analysis uses what is known as an ensemble model, or a blend of the results from different models that are then blended together to form a single, and hopefully more precise, final prediction. One of the models is tree-based, the other linear. The historical data from previous wide receiver classes going back to 2006 and through 2018 were used to train the models, including the number of actual top-12 weekly fantasy finishes for those previously drafted wide receivers. The historical fantasy finishes are based on points-per-reception (PPR) scoring.

The features for each wide receiver in the models are as follows, ordered by relative importance and statistical significance. The stats are from the prospects’ best statistical season in which they played at least five games and logged at least 100 carries:

Draft position is the most important feature in predicting fantasy success for wide receivers, followed by production and then measurables. Workout metrics in the model were limited to the 40-yard dash due to its ubiquity and outsized influence on NFL draft position for wide receivers. For the 2021 class, the 40-yard dash times are from Pro Days, with a 0.03 penalty for comparison to combine times. For the few wide receivers without Pro Day times, I estimated the times based on media reports and built in conservatism.

I am using the expected draft positions from the top-150 list at GrindingTheMocks.com as a proxy for actual draft positions for the yet-to-be-selected 2021 class. For prospects unranked according to recent mocks, I’m adding 10 draft slots to the last ranked wide receiver by the order of our big board.

Below are the top 20 wide receivers drafted from 2006-20 by predicted top-12 fantasy finishes. Keep in mind that the data from 2006-18 was used to train the very model doing the predictions here, so overfitting can bias the results toward those wide receivers who ended up being most successful. 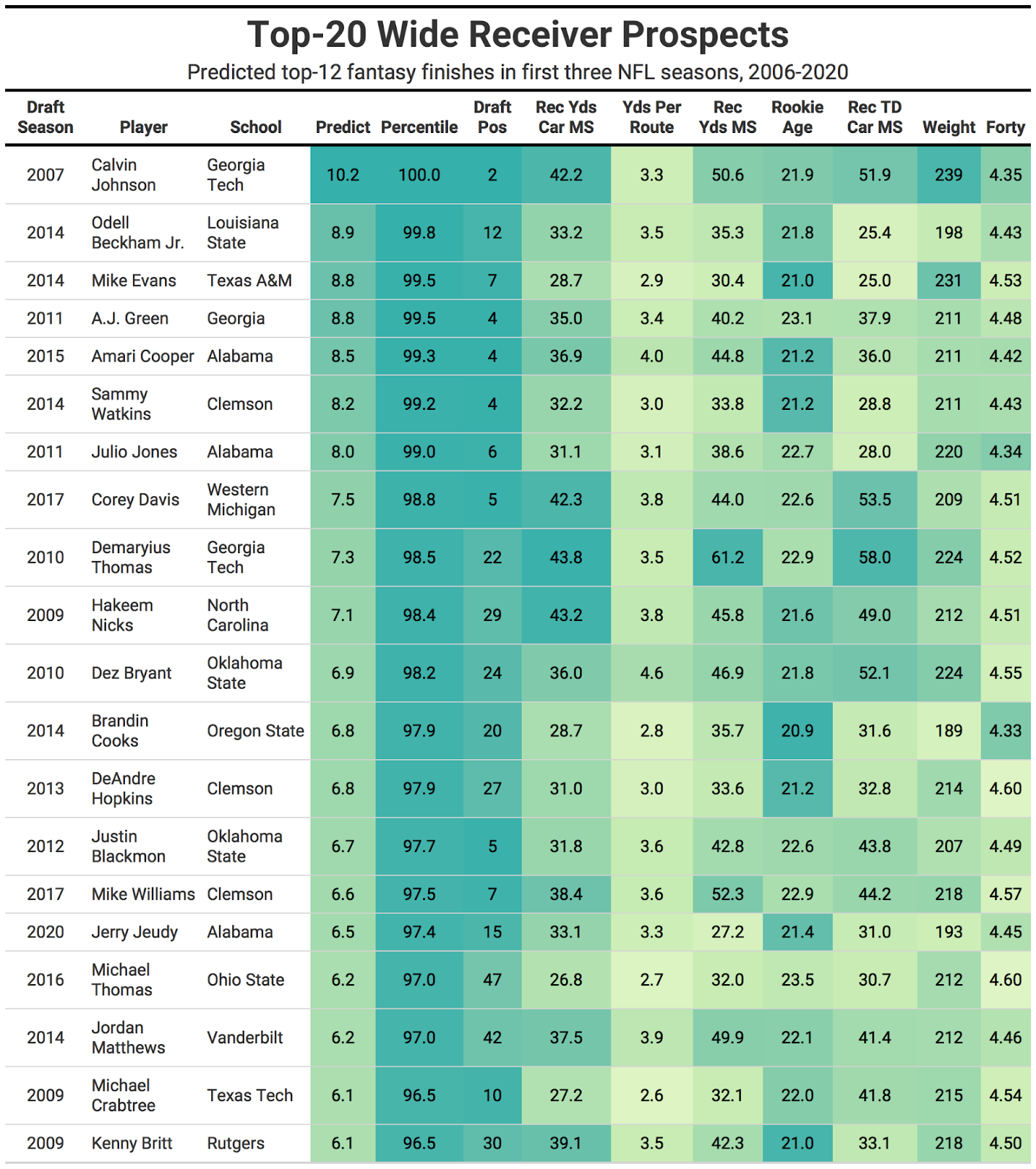 Draft position is the major driver of fantasy projections, with the top eight players all drafted within the top 12 picks in the NFL draft. But it isn’t all draft capital moving the needle, with production also playing a huge factor. Calvin Johnson was the complete package, and when adjusting for teammate strength, Odell Beckham Jr. rises to the second-highest projection. Corey Davis and Jordan Matthews are two of the bigger disappointments in the top 20, though each player has had some success. Both were highly productive, and neither was an early declare. The early-declare variable is missing from this analysis, which instead uses age.