This might be one of the strongest running back groups to enter the draft in some years, despite coming on the heels of several other draft classes that have been able to make similar claims.

Saquon Barkley is expected to be the first back taken, and the star of the group, but there are several players behind him that will make significant impacts from day one who they are pushing to be seen as first-round picks in their own right, and may actually be better pure runners than Barkley is. Even among that group, there are the names everybody knows and underrated players that belong in the same conversation. One of those is San Diego State’s Rashaad Penny.

Penny is a first-round talent at running back.

Let’s put to one side for a moment the more existential question of whether any running back is worth a first-round pick in today’s NFL – whether the position has that inherent value at all – and assume that they are and it does.

Penny is a prototypical NFL back who excels both on the ground and as a receiver out of the backfield. He may not have quite the same dynamism as a receiver as Barkley does, but he does have Barkley beat in some ways on the ground.

The big flaw in Barkley’s game is his tendency to try and emulate Barry Sanders – passing up three yards to try and find 25, and running himself into trouble, resulting in loss of yardage. This was also the biggest criticism people had of Sanders looking back at his career, but it was always a case of being well worth the price of the special things he could do with the football. The same is true to some degree with Barkley, but the same tendency is a little less excusable in his case given the difference in size and power between him and Sanders. 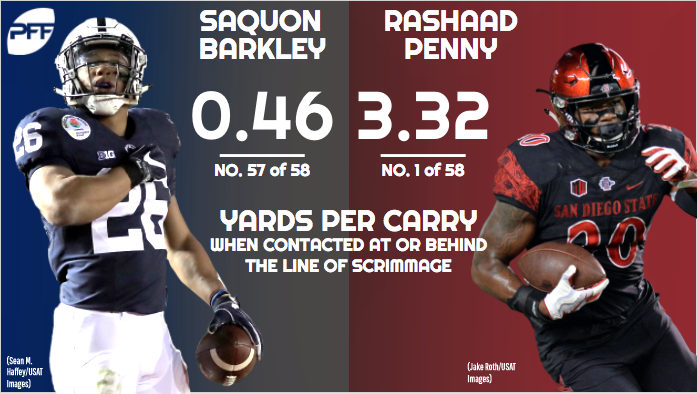 Barkley is over 230-pounds and all too often runs with the express purpose of avoiding contact. 230-pound backs don’t need to fear contact the way those that barely tip the scales at over 200 do. The key stat that highlights this is that on runs when contacted at or behind the line of scrimmage last season, Barkley averaged fewer than half a yard per carry, which ranked 57th of 58 qualifying backs in this draft class. Penny by contrast averaged 3.32 yards per carry, which led the draft class.

While Barkley will leave some plays on the table, Penny rarely does that.

Penny also led the draft class in elusive rating – PFF’s rushing metric that attempts to distil what a back did independent of the blocking that was given to him by looking at broken tackles and yards after contact. Penny broke 80 tackles on the ground last season and two more as a receiver. That figure was by far the most of anybody in this draft class, more than 20 clear of the rest of the field.

While it’s true that some of that was a product of workload (he had 276 carries last season), even in terms of broken tackle rate he again led the draft class.

Strength of opponent is certainly something of a question for Penny, but he was able to run well against legitimate defenses and excelled at the Senior Bowl against all-star competition.

Penny also stepped it up at the Senior Bowl against all-star competition: pic.twitter.com/hxMGUQQMtc

The interesting thing about Penny, is that he is a player who looks better the more tape of him you watch. While some players can dazzle with highlights only to disappear a bit the deeper into their tape you get, or simply present their flaws the longer you watch, Penny seems to impress even more the more tape you get through.

He had seven excellent games of grading, including the Senior Bowl game itself and has very few flaws to his game at all. His overall athleticism was something some people questioned, but even if the tape didn’t dissuade that notion in the first place (and it should have), his measurements at the NFL scouting combine certainly answered those questions.

If you're of the opinion that running backs are worth 1st round draft picks – then Rashaad Penny deserves to be in that conversation: Vision and speed here pic.twitter.com/2vNYlTtXlH

That speed was on display multiple times in college this past season. His vision is excellent to find cutback lanes and open space, but once he bursts into the open field he typically runs away from a defense.

Penny had 31 runs of 15 or more yards last season to – again – lead the draft class. He gained over 1,000 rushing yards on these explosive runs alone, almost 300 more than any other runner, and while again it’s true that this is influenced by the sheer volume of carries he had, his breakaway percentage was good enough for third in the class (54.5 percent), just behind Barkley (55.6 percent).

Penny has a solid build at the position and it can lead to him looking a little stocky, which is where I suspect the idea that he lacked speed came from. While people underestimating his speed would appear to be folly, he also shows at times that he is more than just fast in a straight line, but able to pull moves on defenders in the open field.

This might be my favorite play of his. Looks like he's going to run the safety over, then just hits him with a move and leaves him grasping at air in the open field. pic.twitter.com/CKgwzlJvKm

This is one of my favorite Penny plays of the season, not because it ranks particularly high on the difficulty scale, but because of just how badly he embarrasses the safety in the open field. From the right angle it looks a certainty that he is going to just lower his shoulder and try to run him over, but instead he pulls a move and cuts inside, leaving the safety just grasping at air. The safety didn’t even get close to touching Penny, let alone bringing him down.

If there is one legitimate criticism of Penny’s game, it’s pass protection and blitz pickup, something he himself acknowledges and claims to be working hard on before the draft.

Penny surrendered two sacks and nine total pressures from only 57 pass-blocking snaps in 2017. That gave him a pass-blocking efficiency score of just 87.3, 58th of 60 qualifying backs in this draft class. The only good news there is that he ranks above Akrum Wadley from Iowa, a player seen by many as a third down specialist.

Pass-blocking right now is a problem, but Penny is good enough as both a runner and receiver to be able to get him on the field on most downs early, and if a team really wants to hide that aspect of his game, they can do so by keeping him off the field on key downs, as the Rams did early with Todd Gurley.

The bottom line is that Penny has tape that stacks up with the best running backs in this draft class, and while names like Derrius Guice, Nick Chubb, Sony Michel and Barkley are getting all of the first-round talk, Penny leads them all in several notable statistical categories.

If you believe running backs are worth first-round picks, then your eyes will be firmly on Rashaad Penny as an option.