Do PFF college grades translate to the NFL for pass-rushers?

In the second article in a series of deep dives into the predictive power of our college grades and signature stats at Pro Football Focus, we take a look at pass-rushers. As we’ve written about before, rushing the passer has a substantial impact on the game of football, with pressure dropping an offense’s Expected Points Added by over a half of a point per play. Sacks are even more valuable, worth approximately two points for the defense.

With the value of pass-rushers a decently understood phenomenon in the NFL, a natural question is whether we can predict quality of play for pass-rushers via a data-driven approach. Players’ athletic profiles have been used for quite some time, as variables like their 40-yard dash, vertical jump, broad jump and 3-cone drill have had a small, but statistically-significant correlation with draft position (at least in isolation) throughout the PFF era. Production, however, doesn’t get nearly as much attention as it should, in many ways because we haven’t had means to measure it using anything other that tackles and sacks. That has changed since 2014 when we at PFF started grading college players, and specifically pass-rushers. While we’ve only graded and charted college players for four seasons (and only three season’s worth of players that have played in the NFL), our sample of players that have PFF data at the college level and more than 250 snaps rushing the passer at the pro level consists of 75 players.

As we at PFF have discussed previously, while sacks are a hugely important part of football, they are generally better predicted by things like PFF pass-rushing grades and pressures than they are by sacks themselves. Thus, when looking at predicting pro success for college pass-rushers, examining (raw, play-by-play) grades and pressure statistics first, is the way to go.

Doing simple correlation analysis, we find that per-snap pass-rushing grades at the college level correlate at a rate of 0.69 with grades at the NFL level, meaning that roughly half of the variance in how a pass-rusher performs at the pro level (should he get to 250 pass-rushing snaps) can be explained by the variance in how he graded as a college pass-rusher. This is very similar to the year-to-year correlation between pass-rushers we cited here at the NFL level. Pressures at the college level correlate with pressures at the pro level at a similarly-strong rate of 0.60, while PFF pass-rushing grades and pressures correlate with sacks at the next level at rates of 0.69 and 0.61, respectively (sacks correlate with themselves at a rate of 0.48). In terms of football data, this sort of predictive power using so few variables is a real testament to the grading and charting process applied to these players.

While a sample size of 75 players can and should add a level of sobriety to any statistical analysis, providing context can chip away at some (warranted) skepticism. One way to add context is to differentiate players by what they are asked to do. While assigning players a position can be tricky, our Player Participation data at PFF, coupled with clustering analysis, can place players into statistically-differentiated position clusters – players that are predominantly edge guys, players that are interior players that don’t play nose tackle, interior players that play nose tackle. As the figure below shows raw PFF pass-rushing grades translate to the NFL level more significantly for the former two groups, with nose tackle pass-rushing efficacy a bit more noisy (and has an even smaller sample size). 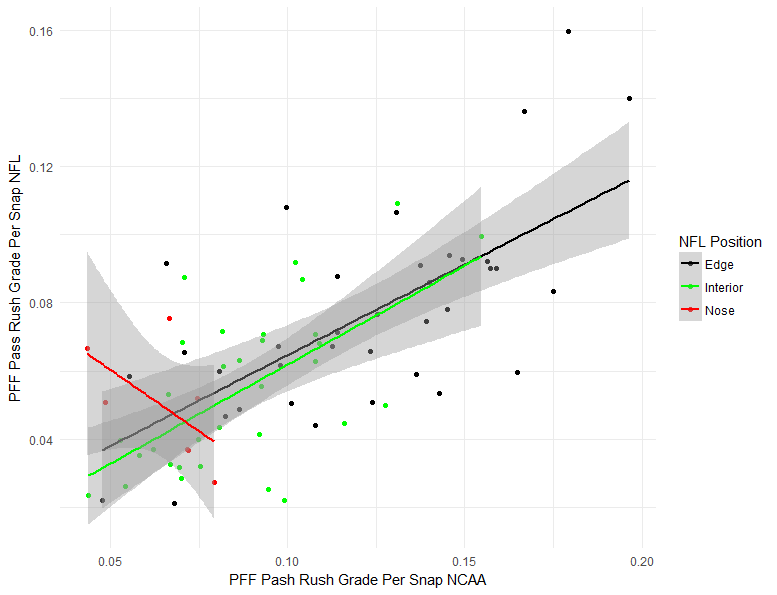 While it’s likely many systems would have pointed to the likes of Joey Bosa and Myles Garrett having success early in their NFL careers, our grades and data pointed towards Carl Lawson being one of the better players in the entire draft a year ago. A great example of the efficacy of using PFF college grades to project play at the next level, Lawson shined as a rookie, earning a 80.6 grade and 59 total pressures in a limited role for the Bengals, despite falling to the fourth round of the draft.

Much is made of what a prospect does after his college career is over, at the NFL Combine or his respective pro day. The question is whether there is a any merit to the hoopla that surrounds the numbers produced without football pads or real competition.

It seems safe to say that the combine measurables influence a player’s draft stock, so we started by using an ensemble model to test how well combine data predicted whether a defensive lineman would be drafted and at what pick (for those who were drafted). If we use the entire sample of lineman that we have full careers worth of PFF data, combine metrics were able to classify whether a player was drafted, signed as a UDFA or went unsigned and undrafted at a 77.3 percent rate, with a R-squared value of 0.621. Clearly the pads- and helmet-free exhibition gives insight into who is draftable and who isn’t. Taking this one step further we tested whether adding a prospect’s PFF college grade would increase the ability to predict where in the draft the player was taken, given he was drafted. When we added a player’s PFF college grade to his combine data and position on the field, the R-squared value of our pick prediction model more than doubled, suggesting that PFF college grades are able to differentiate prospects with far less noise than athletic traits.

The next step was to look at how adding in a prospect’s college PFF grade might impact our ability to predict a prospect’s PFF pro grade. Again we saw the predictive power of our model more than double once the college grade was added to the set of combine metrics. While this is not surprising, it is good to see that adding college production and quality on a per-play basis allows us to better predict production at the NFL level. In fact, a look the importance of the different variables in the model showed that a prospect’s college production grade was three times as important to the model’s predictiveness than the most important combine metrics (broad jump and 40-yard dash). 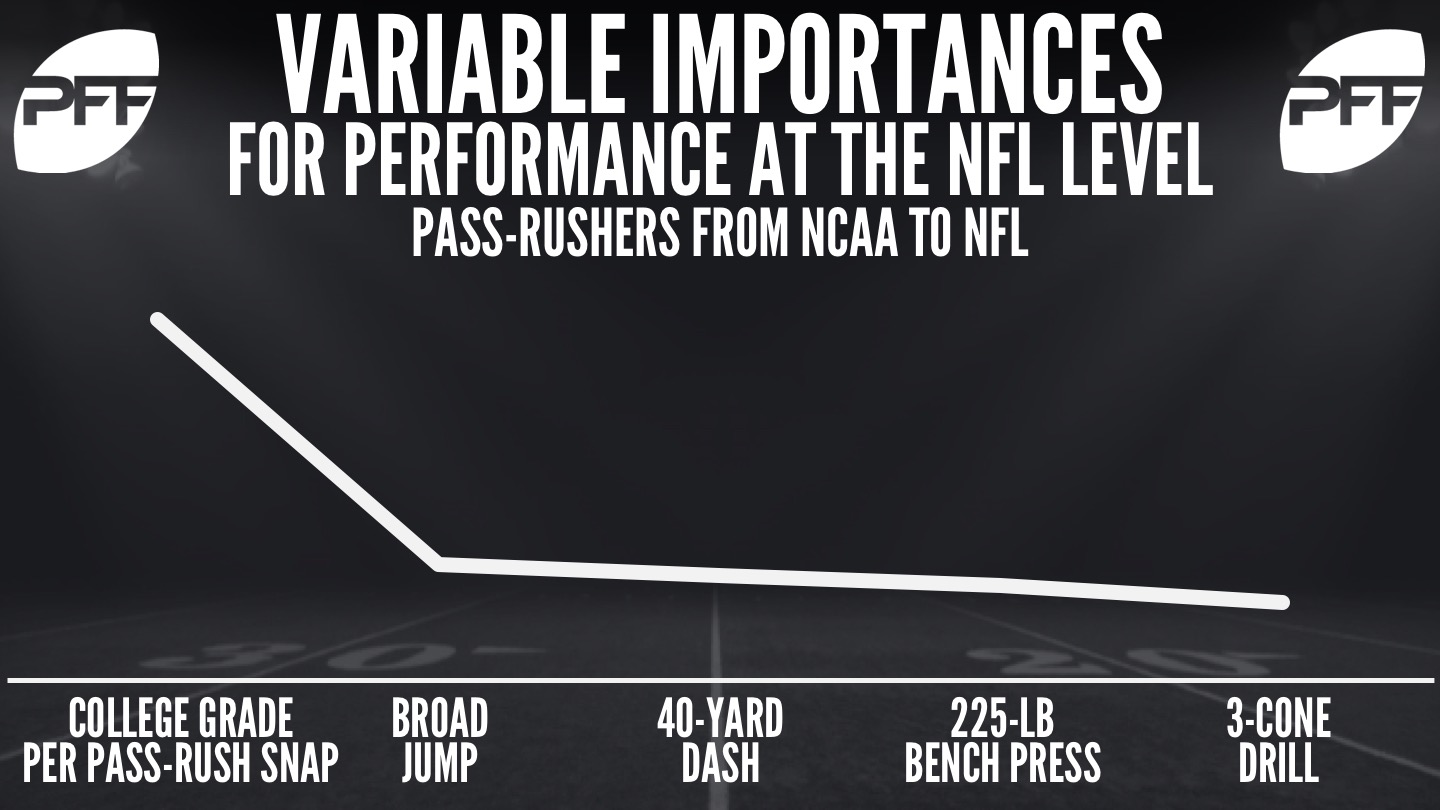 While there is still much work to be done, the directional results say that what a player had done on the field as a college competitor (as measured by PFF grades) far outweighs the feats of athleticism that occur during the weeks immediately leading up to the draft the following spring. Despite the tricks that recent memory tries to play, we are best to let a player’s college production and quality of play inform our prediction of how a prospect will likely perform at the next level.  Thus, when players like Maurice Hurst are higher in our mock drafts than in others’, there’s statistically-derived reason.