Michigan defensive back Daxton Hill takes the field for warmups before the Orange Bowl against Georgia on Friday, Dec. 31, 2021, in Miami Gardens, Florida.

We are back with another positional writeup of draft prospects, this time focusing on the cornerback. We previously dove into the quarterbacks, running backs, wide receivers, tight ends, offensive linemen and interior defensive linemen, edge defenders, linebackers and cornerbacks.

For this analysis, we took prospect write-ups from The Athletic's Dane Brugler, one of the best football film analysts out there, over the past eight seasons (including 2022) and used latent semantic analysis (LSA) to derive similarity scores between the text in prospects’ scouting reports.

Using the analyses above, we can look at 2022 prospects in a couple of ways. First, we can examine player comparisons for notable prospects. Second, we can rank the players in each position group by the score derived above. These scores have correlated well with draft position and future WAR generated at the NFL level, although a more robust analysis using additional seasons and data sources is beyond the scope of this article.

Let’s start by looking at the most successful NFL safeties' text comparisons so that we can then see what it means for prospects in the 2022 class. 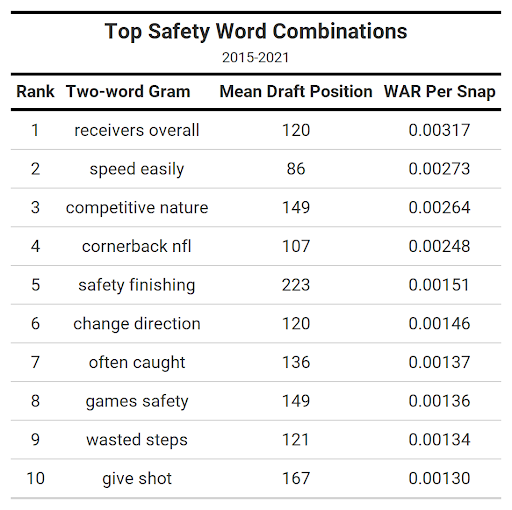 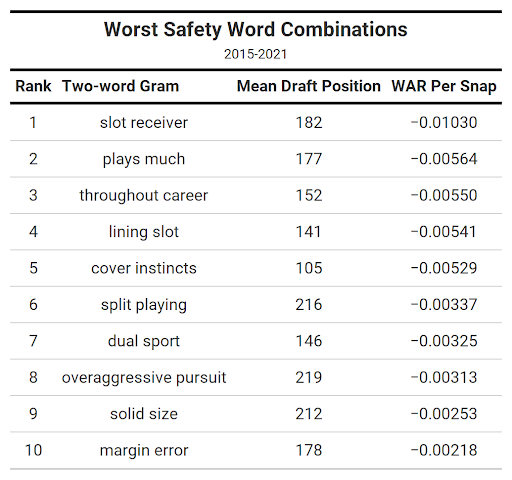 Hill offers some of the best position flexibility among defensive backs in this draft class. He had success lining up in the slot at Michigan, leading the team in every statistical coverage category. PFF projects him more as a deep safety at the NFL level, and Brugler suggests that he is an immediate starter as either a split safety or slot defender.

Hill projects as the clear top safety in this particular exercise, as Derwin James, Justin Reid and Juan Thornhill all land in his top-10 player comparisons. No player in his top 10 generated a negative WAR throughout their career, which suggests Hill might have one of the highest floors among coverage defenders in this draft class. This is backed up by his top-end speed, as he posted a 4.38-second 40-yard dash at the combine.

Brisker checks in at No. 40 on PFF’s latest big board and looks like one of the best safety options in this 2022 class. He compares favorably to Jamal Adams and Marcus Williams, and he should thrive as a box defender with impressive coverage skills and the ability to help in run defense. He may not be the best athlete in this class, but Brugler speaks to his ability to be in the right place at the right time. Brisker is +250 on DraftKings to be selected in the first round and is the third-most-likely safety to be selected first on Thursday.