In the run-up to the 2022 NFL Draft, we'll be predicting the draft order for every non-quarterback or specialist position based on their athleticism numbers and final-season college production. We've already done so for wide receivers, tight ends, interior offensive linemen, offensive tackles, edge defenders, linebackers, cornerbacks and safeties.

While the target variable of our modeling was pick number, we will only be reporting the rank relative to the player’s draft class — interior defensive linemen, in this case. This is because there are too many externalities for why a player is selected when they are, such as the relative strength of the draft class, individual team needs and team measurable thresholds, for the prediction to be well-calibrated. However, by looking at a player’s rank, we can get a better idea of how they stack up relative to their peers.

Athletic testing numbers come from the NFL Scouting Combine, and when possible, missing data was filled in with pro day measurements. If a player did not participate in more than three drills across the combine and their pro day, they were excluded from the dataset. For the interior defender class, that means Perrion Winfrey, among others, are not included in this section of the analysis.

If a player qualified to be in the dataset, their missing events were assumed to be position average over the past five combines. These measurements and times were thrown into a random forest model to handle potential nonlinearities and complex relationships between athletic variables to predict draft position.

The most important predictive drill for where an interior defensive lineman is drafted is the 40-yard dash. This is obviously not reflective of what defensive tackles are asked to do on a down-to-down basis, as they rarely have to go more than five yards in a single direction. Realistically, this means NFL teams view the 40-yard dash as a good avenue to assess overall athleticism.

Following the 40-yard dash, the model appears to value performance in the broad jump as the next most important, likely as a measure of explosiveness. The model does appear to be more lenient for players who weigh more than 300 pounds, likely reflecting the NFL being less worried about 40-yard dash times for nose tackles. 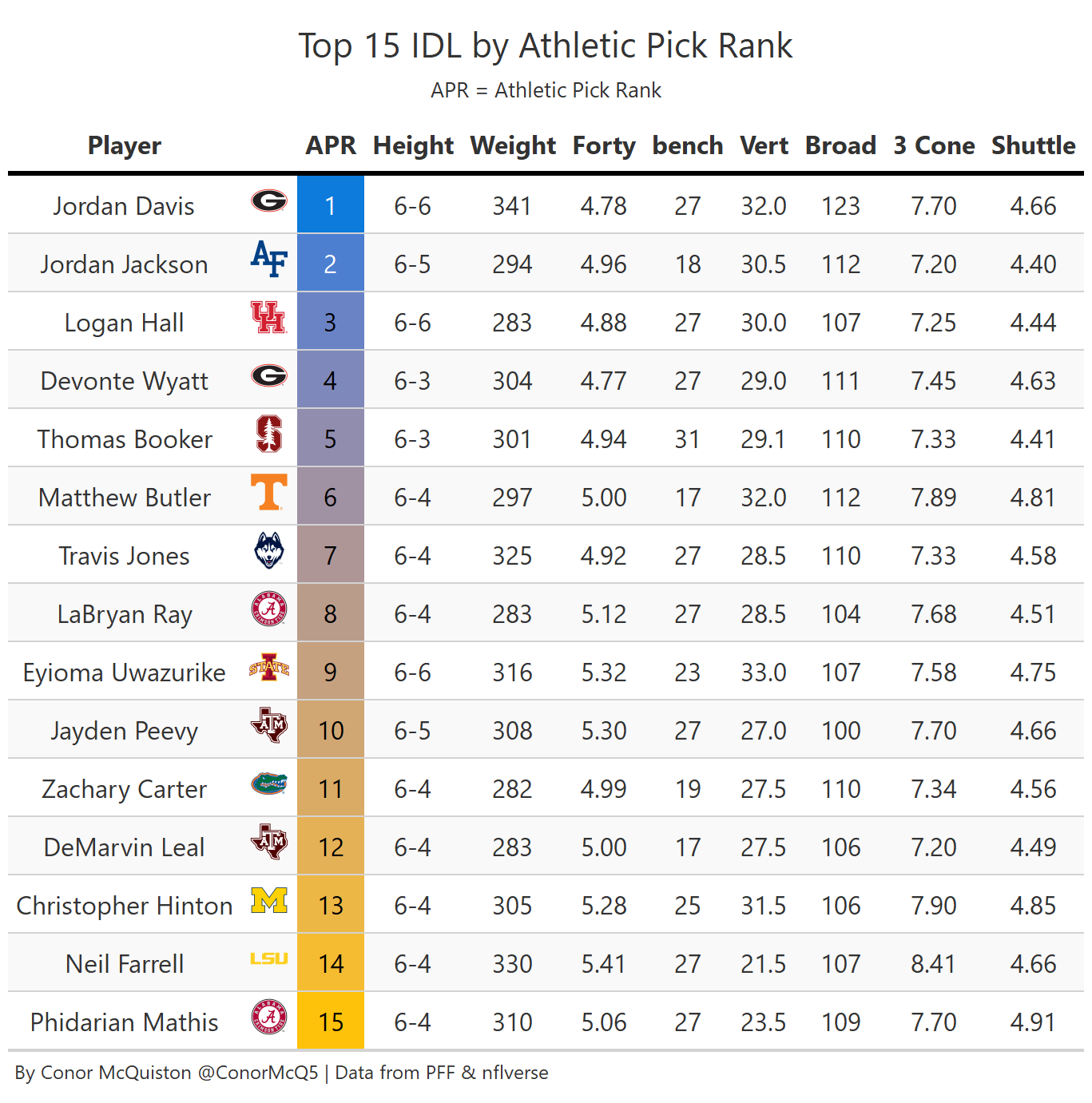 We additionally modeled draft position based on production metrics charted by PFF, and that was then run through a random forest model to handle nonlinearities. This includes rate metrics, such as pass-rush win rate, and volume metrics, such as run stops. When PFF grades were used, we first binarized and transformed them into win and loss rates. We also added an indicator for whether the player was in a Power Five conference since strength of competition is meaningful for NFL evaluators.

Unsurprisingly, NFL teams prefer pass-rushing interior defenders, but it is not as overwhelmingly preferred as was observed with edge defenders. The model appears to be functionally maximizing run-defense win rate and pass-rush win rate, with preference given to the latter, while using pressure rate as a tiebreaker. Volume metrics in run defense or pass rush do not play a significant factor. This reflects NFL teams placing extreme value on the ability to generate quarterback pressure from the A- or B-gaps, which typically reaches the passer quicker and thus makes it more difficult for them to manage, and on how important run defense is for interior defenders.