In the run-up to the 2022 NFL Draft, we'll be predicting the draft order for every non-quarterback or specialist position based on their athleticism numbers and final-season college production. We've already done so for edge rushers, wide receivers, cornerbacks, tight ends, and safeties.

This series' goal is to identify players with similar athleticism and production profiles to those who are historically drafted early. This gives us some indication of the type of player the NFL prefers to pick early. Additionally, separating production and athleticism numbers allows us to categorize players as producers or athletes, which may yield insight into their potential NFL success.

While the target variable of our modeling was pick number, we will only be reporting the rank relative to the player’s draft class — receivers, in this case. This is because there are too many externalities for why a player is selected when they are, such as the relative strength of the draft class, individual team needs and team measurable thresholds, for the prediction to be well-calibrated. However, by looking at a player’s rank, we can get a better idea of how they stack up relative to their peers.

Athletic testing numbers come from the NFL Scouting Combine, and when possible, missing data was filled in with pro-day measurements. If a player did not participate in more than three drills across the combine and their pro day, they were excluded from the dataset. This does not particularly affect the safety class. 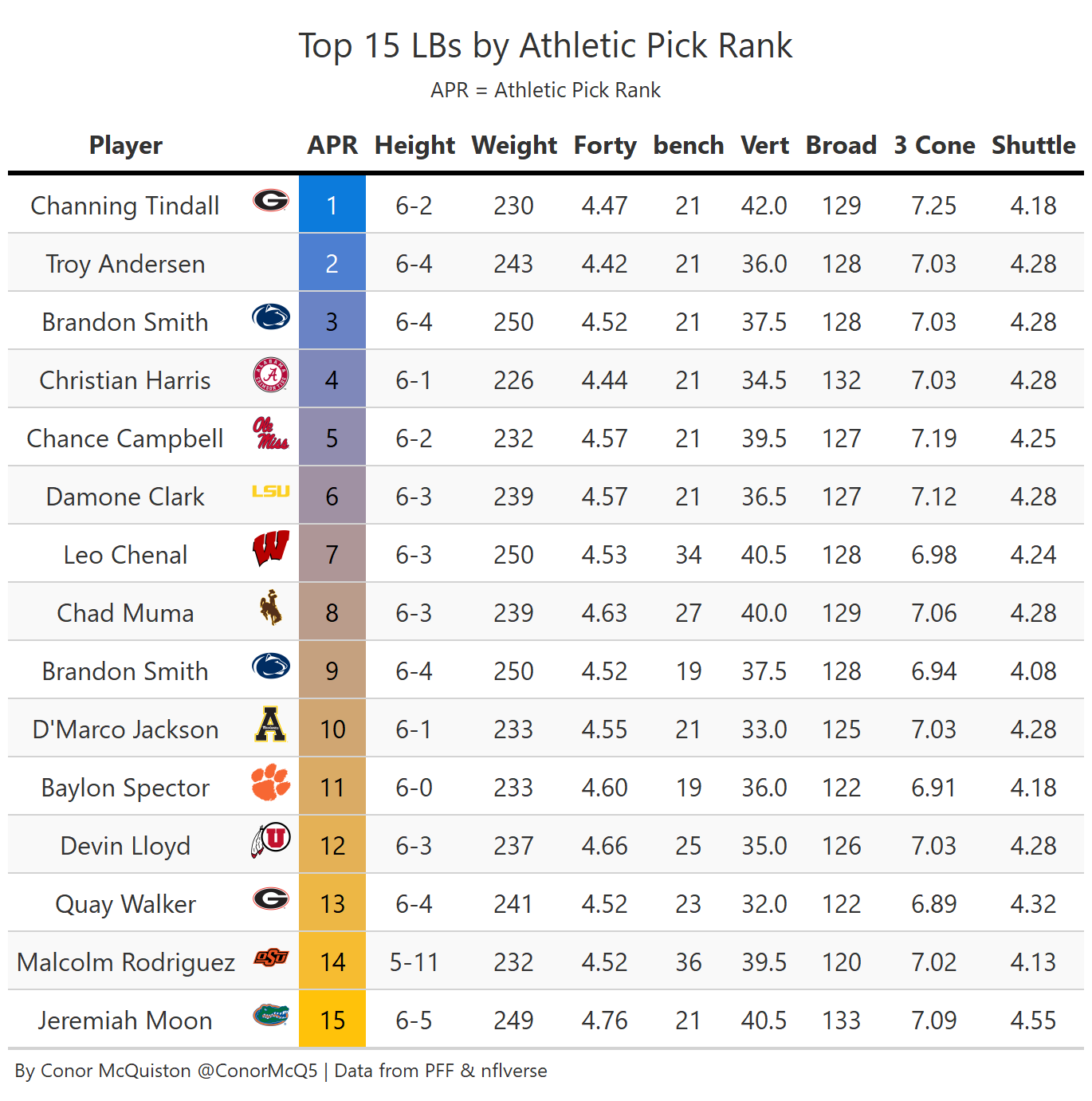 We additionally modeled draft position based strictly on production metrics charted by PFF, also in a random forest model to handle nonlinearities. The inputs included rate metrics, such as target rate and pass breakup rate, as well as volume metrics such as coverage snaps and run stops. We also added an indicator for whether the player was in a Power Five conference since strength of competition is meaningful for NFL evaluators.

Contrary to what we observed in safeties, the production that drives NFL opinions on linebackers appears to primarily revolve around run defense and rushing the passer.

Both in rate and volume, if a player generates a significant amount of stops, stuffs, pressures, and grades out well, he will be projected to be taken early. An interesting corollary is that coverage production, as measured by PFF’s charting, plays little-to-no role in predicting where a linebacker will be selected.

This indicates two potentialities: either PFF’s coverage metrics do not describe what the NFL is looking at when evaluating LBs in coverage well, or the NFL simply does not value college football coverage ability when evaluating linebackers. While there is likely some truth in both statements, the answer more likely leans toward the former, as coverage is notoriously difficult to quantify, especially with linebackers, where they are not frequently in one-on-one matchups.