The 2021 wide receiver class is just as deep as last year’s. No fewer than seven wideouts are worthy of being taken in Round 1, and the three blue-chip players who lead the group rank among the very best receivers of the PFF College era.

Today, I’m going to highlight my favorite landing spot for PFF’s top 10 wide receivers. This list is not a projection but rather a realistic look at the best prospect-team pairings ahead of the 2021 NFL Draft.

Cincinnati needs to bolster its offensive line, and one of the best offensive tackle prospects we have ever graded is likely to be available to them at fifth overall. This sounds like an easy decision, right? Not so fast, my friend.

The Bengals are in an ideal position to make improvements to the offensive line without drafting Penei Sewell fifth overall. They rank sixth league-wide in available salary-cap space in a year that star guard Joe Thuney is on the open market; they also own a high second-round pick in a draft class littered with talented offensive tackles. Given where the Bengals will be picking, there will certainly be a first-round caliber tackle there for the taking. Those two moves alone would take the Bengals' offensive line from one of the worst in the NFL to above average relative to the rest of the league.

Sewell may be considered a “generational” prospect, but so is wide receiver Ja’Marr Chase. And if the LSU Tiger hits his ceiling, he will be infinitely more valuable to the Bengals' offense than Sewell ever would be.

There are no negatives to Chase’s scouting report, and he does everything at a high level. He has the physicality and release package needed to handle press coverage right away in the NFL — he still ranks second among Power 5 receivers in 15-plus-yard receptions against press coverage since 2019 (28) despite not playing a single snap last year.

The cherry on top is that Joe Burrow and Chase were college teammates and formed one of the best QB-WR connections in college football history. The duo connected for more deep completions (24), yards (860) and touchdowns (14) in 2019 than any other Power 5 connection in a single season since 2014.

Daniel Jones is entering a pivotal year in his NFL career. He showed growth in 2020 after a disappointing rookie campaign, but the sixth overall pick of the 2019 draft still has to take a massive step forward in 2021 if the Giants are to commit to him long-term. New York still needs to do its part and add weapons to Jones' receiving arsenal, and the explosive Jaylen Waddle is one such weapon.

Remember when everyone was oozing over Henry Ruggs’ 4.27-second 40-yard dash? Well, his former teammate Waddle possesses that same kind of speed. The two raced before the 2019 season at Alabama and practically tied. Speed kills in the NFL, and Waddle has speed in abundance.

Waddle played just four games in 2020 before suffering a broken ankle, but he still racked up 329 deep receiving yards over those contests, 14th among Power 5 wide receivers for the entire season. The Bama pass-catcher has turned over 40% of his targets into an explosive reception of 15-plus yards since 2019, the highest rate in the Power 5 by over two percentage points. Waddle is a threat to house it anytime he gets the ball in his hands and can get behind defenses with ease.

Jones' biggest area of improvement this past year was his deep passing. The volume numbers weren’t impressive, but he still earned the third-best passing grade on passes thrown over 20 yards downfield.

Waddle would step in and become the featured piece in the Giants’ offense, and deservedly so.

The Dolphins could reunite another potent college connection this April with DeVonta Smith and Tua Tagovailoa. Before Tua’s gruesome hip injury in 2019, the two connected for a 150.2 passer rating, 14.8 yards per attempt and +1.1 expected points added (EPA) per target. Tagovailoa targeted Smith 11 times on deep passes and connected on eight for 341 yards and four scores.

Smith proceeded to shatter the PFF record books in 2020, earning an astounding 95.6 receiving grade and ultimately winning the Heisman Trophy.

From route running to ball skills to body control, Smith has displayed everything you want in a wide receiver prospect at a high level. However, there is one caveat with Smith as a prospect — his weight. Smith stands at 6-foot-1 and weighs in at just 175 pounds. We’ve never really seen someone with his build have success at the next level. Then again, we’ve never seen a player as complete as he is at that size.

It doesn’t matter who New England has at quarterback — they need a wide receiver who can actually separate down the football field. Rashod Bateman is their guy.

He may not be uber-athletic like other wide receivers in this class, but very few can match him when it comes to getting open. Bateman has produced a top-10 rate of separation over the last two seasons and ranks first among Power 5 receivers in yards per route run (3.74) when lined up on the outside. The Minnesota product has an NFL-ready release package, is excellent in contested scenarios and offers value after the catch.

I have offensive tackle Christian Darrisaw going to Washington in the first round in my latest mock draft. But if the Football Team doesn’t want to address offensive line at No. 19 overall, and Alabama QB Mac Jones is off the board, all focus should gravitate toward someone like Rondale Moore, who would immediately step in to take the pressure off Terry McLaurin in the Washington passing attack.

The third-year pass-catcher out of Ohio State wouldn’t receive nearly as much attention with a dynamic threat like Moore on the field. It would also get him back to doing what he does best — getting vertical.

McLaurin’s average depth of target dipped from 14.6 as a rookie in 2019 to 9.9 in 2020. The percentage of catches that turned into a 15-plus-yard gain decreased from 40% down to 30%, and his yardage total from vertical routes was nearly cut in half from 404 to 207 despite seeing 37 more targets overall.

This, of course, has a lot to do with Washington’s quarterback situation, as Dwayne Haskins was not good early on and Alex Smith is renowned for falling on the conservative side of the QB spectrum.

Still, Moore would help open up this offense and form a strong duo with McLaurin. The Perdue product is an athletic freak who clocked a 4.33-second 40 coming out of high school to go with a 42.7-inch vertical and 4.01-second short shuttle. Since his arrival in Lafayette, videos posted to social media show the 5-foot-9, 180-pound receiver benching over 400 pounds and squatting over 600. That elite-level explosiveness and strength will make him one of the most dangerous after-the-catch weapons in the NFL early in his professional career. He broke an astonishing 37 tackles back in 2018 alone, which still stands as the PFF record for most broken tackles after the catch by a Power 5 receiver in a single season.

I wouldn’t be too concerned with the injuries Moore has battled over the last couple of years. The limited route tree and schemed production at Purdue doesn't particularly bother me, either. He’s going to be electric at the next level.

The Ravens need a true “X” receiver, but they also need a new face to man the slot. So, it makes all the sense in the world for them to go all-in on one of the free-agent wideouts to be that WR1 and then pick up Moore to man the slot in Round 1 of the 2021 NFL Draft.

Moore ranked in the top three among Power 5 receivers in both yards per route run (3.87) and receiving grade against zone looks this past season. He’s quick, has broken 31 tackles on 153 receptions since 2019 and has caught 20-of-33 contested catches over those last two years.

Toney landing in Chicago at Pick 20 — a move I mocked earlier this week — makes sense, but the best landing spot for the former Florida Gator would be Kansas City. Andy Reid and QB Patrick Mahomes with perennial deep threat Tyreek Hill, superstar tight end Travis Kelce and an after-the-catch phenom in Kadarius Toney? That, right there, would be unfair.

Toney moves in a way that is almost hard to believe. His combination of balance, agility and explosiveness makes him near impossible to tackle. The Florida wideout has touched the ball 187 times in his college career and has broken a whopping 66 tackles while averaging 8.5 yards after the catch.

As the draft nears, it seems more and more likely that Toney will be taken before the Chiefs pick at No. 31, but it isn’t out of the question. And if he’s still on the board, it should be a no-brainer for GM Brett Veach.

With Corey Davis hitting free agency, Tennessee is likely to be in the market for a new No. 2 receiver ahead of the 2021 campaign.

Marshall played on the outside in 2019 before taking over Justin Jefferson’s role in the slot for 2020, so he's capable of taking over Davis’ spot in a Tennessee offense that isn't likely to change all that much.

Marshall has a ton of potential but is a project at this point. The former five-star recruit is only 20 years old, needs to add more to his 6-foot-3 frame and has some ways to go as a route-runner. The box score production can be misleading as a lot of it was schemed, but the physical tools are there. He has sneaky speed and a massive catch radius that allows him to snag off-target throws with ease. Marshall impressed in contested scenarios throughout his time at LSU, hauling in nine of his 11 contested targets in 2020.

A handful of teams could use Brown’s services, but Arizona makes a lot of sense. With Larry Fitzgerald inching toward retirement and Christian Kirk recording a receiving grade that ranks fourth-to-last at the position since Kliff Kingsbury took over, the Cardinals are going to have to bring in more weapons to fill out their 10 and 11 personnel packages.

Kyler Murray, one of the best deep throwers in the league, would be getting one of the top vertical threats in the class with Brown.

The former Tar Heel was the sole vertical threat at UNC over the past two seasons and racked up 16 touchdowns on vertical targets in that span. And while Brown’s route tree was incredibly restricted, he still showed that he would have no issue with taking on a more diverse set in the NFL.

Wallace’s skill set is limited, but it’s one that Aaron Rodgers and the Packers could extract a lot of value from. He was an uber-productive receiver at Oklahoma State throughout his college career, earning a receiving grade above 82.0 in each of his final three years.

Wallace’s sheer explosiveness meant that virtually all of his production came from vertical routes and screens; he hardly won at the intermediate level due to his inexperienced route-running and limited route tree.

The former Cowboy can get by with that in Green Bay, as the offense caters to his strengths. Rodgers ranked in the top five in both screen and vertical pass attempts in his 2020 MVP campaign. 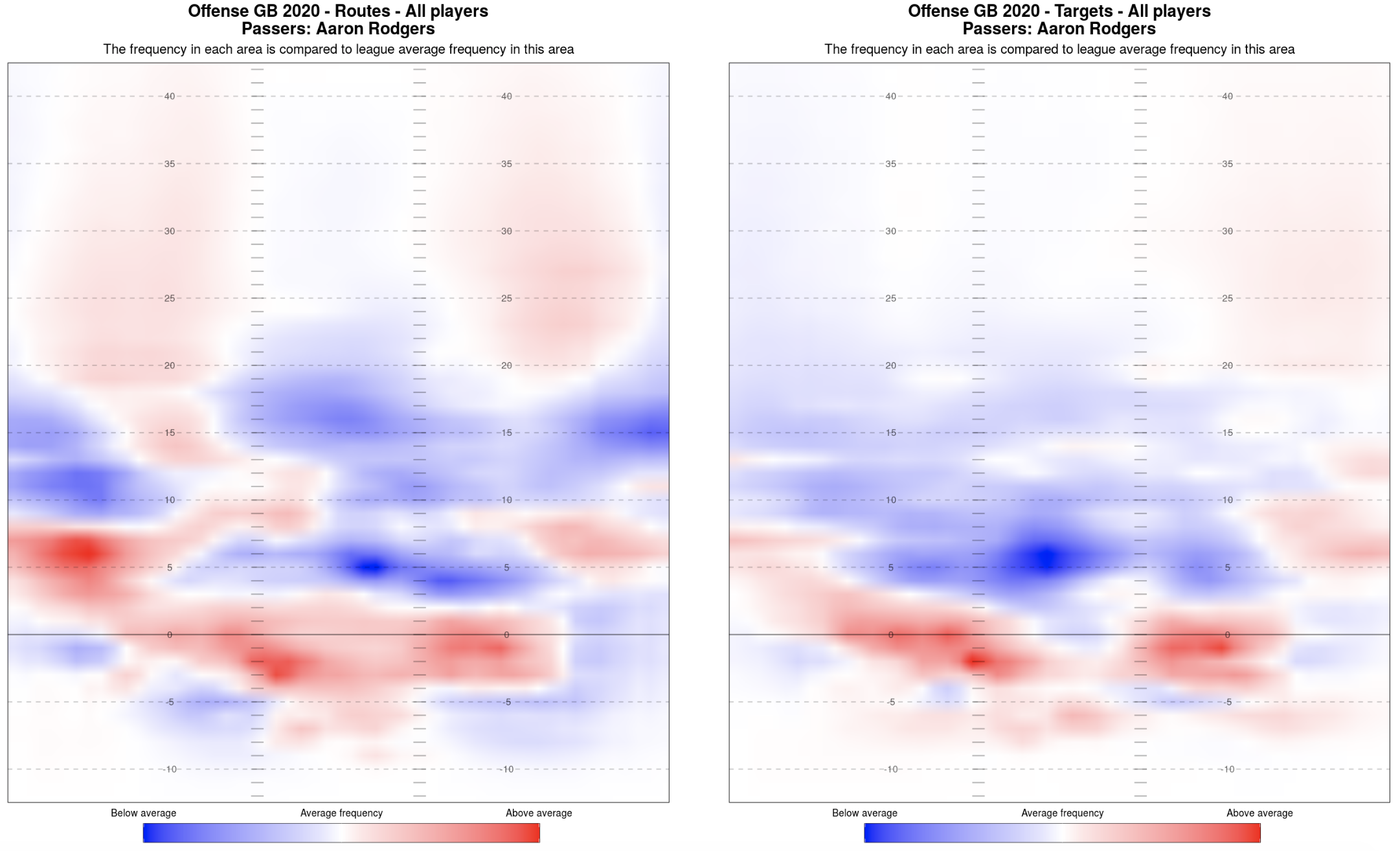 In his final three years at Oklahoma State, Wallace racked up the second-most yards stemming from vertical routes in the Power 5 (1,378). He can stack corners with ease or win in contested scenarios deep downfield. Wallace produced 43 contested catches since 2018, 11 more than anyone in the Power 5. In that same span and among the same group, Wallace trailed only Jaylen Waddle for most yards after the catch per screen reception at 12.6.

He’s not for everyone, but he would fit nicely in a Green Bay offense that lacks receiving threats. If the Packers decline to take a wideout in Round 1, Wallace should be in their plans for Day 2.