South Dakota State’s Cade Johnson (15) sprints to the sideline after a catch against Southern Utah’s Carlton Johnson during the first quarter of the Jackrabbits’ matchup against the Thunderbirds Saturday night at Dana J. Dykhouse Stadium in Brookings. Img 0667 Copy

The comps below were derived from a two-step process. First, I converted all the most statistically relevant stats and measurables to percentiles based on the thousands of prospects who have entered the NFL since 2006 at each position. Then, I filtered the total universe of past prospects by those who had draft positions, weight and 40 times within a 10th percentile in either direction of South Dakota State RB Cade Johnson. For undrafted players, I assigned a numerical draft position of 300.

For Johnson's draft position, I’m using an estimate based on the mock data collected at GrindingTheMocks.com. For the weight and 40 time, I’m using the numbers from his pro day, with a 0.03-second penalty added to the 40 time to reflect the uncertainty of pro-day timed measurements.

Johnson didn’t test particularly well at his pro day, clocking in at 4.49 seconds on the 40-yard dash at only 184 pounds. His performance in the explosion drills was more disappointing, hitting 9-foot-6 on the broad jump (9th percentile) and 35 inches for the vertical (41st).

Johnson garnered heaps of praise for his performance during the Senior Bowl drills and practices, which was more important for a small-school prospect with question marks on how he’d stack up against higher-end competitors. The South Dakota State product earned the highest PFF grade of any receiver in the one-on-ones at the Senior Bowl.

One small-schooler that stepped up on big stage at 2021 Senior Bowl was @GoJacksFB WR Cade Johnson (@cade_johnson). Shook rust off quickly and consistently got open. Made one of catches of the week and made big play as gunner on punt team in the game. ????#TheDraftStartsInMobile pic.twitter.com/Q4ChkVzV6a 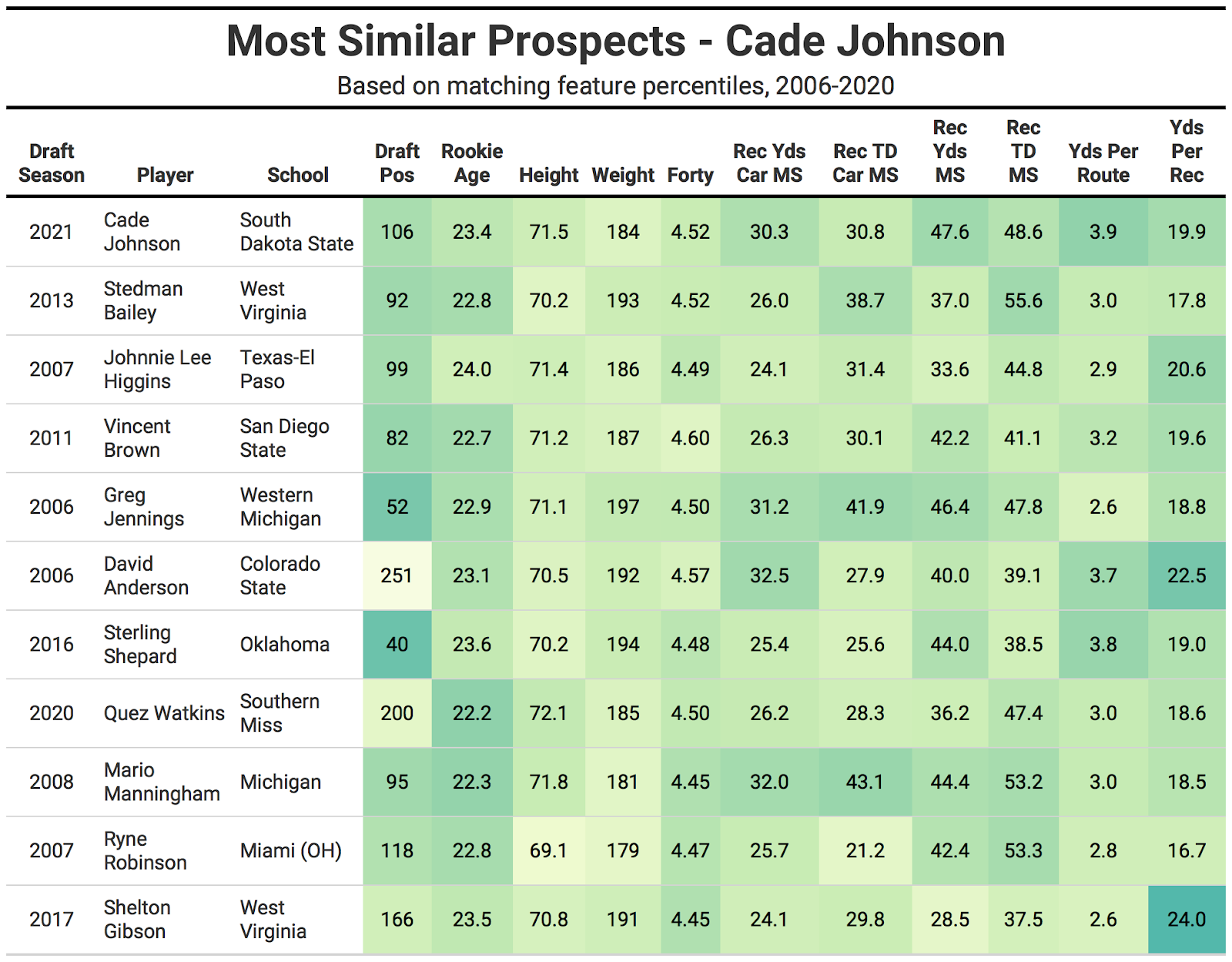 While Johnson isn’t a strong athlete, his market-share production and efficiency numbers were elite. We should view those numbers through a negative lens after accounting for Johnson’s older age (redshirted his true freshman year) and the level of competition playing for an FCS school.