[This is the culmination of a series that has highlighted the league’s highest-graded players when they take on their divisional rivals.] 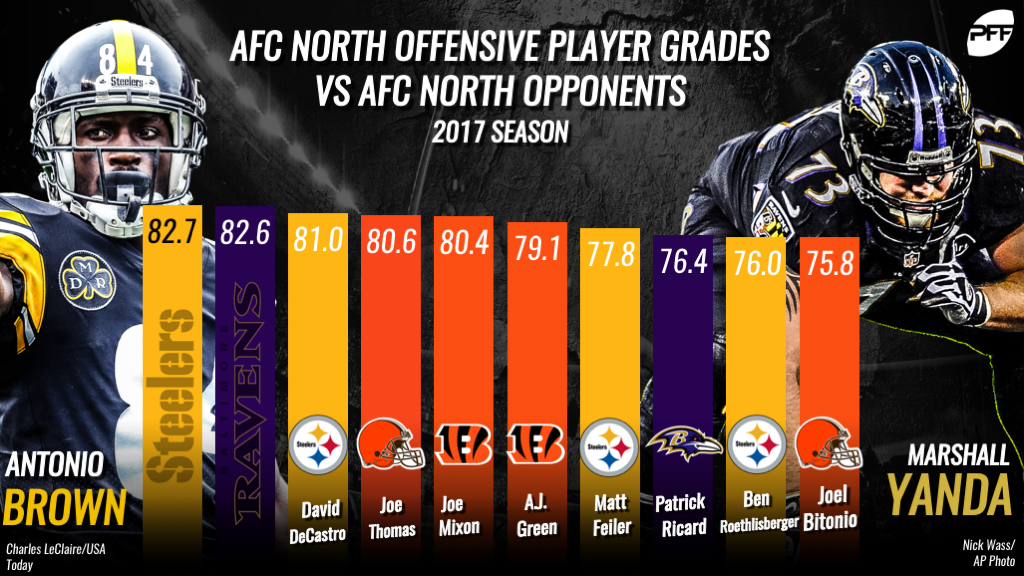 This should come as no surprise, as Antonio Brown has eviscerated defenses in the AFC North for years. Last season, Brown had 15 explosive plays (gains of 15 yards or more) in AFC North competition, ranking first among the division’s pass-catchers. He is as efficient as they come, as he gained an average of 2.98 yards per route ran in divisional play, also ranking first. In terms of moving the chains, not a single pass-catcher in the AFC North had more catches for first downs in divisional play than Brown had last year, as he gave his team a fresh set of downs 24 times through the air. It doesn’t get any better than Antonio Brown, and it won’t get any better for his AFC North rivals when they have to play him this season.

Although Yanda only played two games last season, he met the 50-snap qualifier and made the list at number two. Yanda allowed a pressure rate of just 2.4% in the two divisional games he played in last season, which ranks first overall among the division’s guards in AFC North games. Yanda also made an impact on running plays, as he earned a run-blocking grade of 77.6, ranking second out of 11 qualifying guards in divisional play. Look for Yanda to reclaim his spot as one of the league’s best guards as he makes his return this season.

DeCastro is coming off a huge season after earning a 90.0 overall grade and ranking first among all offensive guards in the NFL. The biggest reason for DeCastro’s career-year in 2017 was his pass-blocking, and his rivals in the AFC North saw it first-hand. In AFC North games, DeCastro allowed a pressure-rate of just 2.5%, ranking third among offensive guards; he surrendered only five total pressures on 203 pass-blocking snaps (one hit, four hurries, zero sacks). As for running plays, DeCastro earned a run-blocking grade of 76.7, ranking third out of 11 qualifying guards in AFC North competition. Big Ben, Bell, and Brown may get all the attention, but David DeCastro is the man behind the scenes making it all work.

Thomas had a great final year in the NFL, finishing as the best offensive tackle in AFC North competition before heading into retirement. In divisional games, he earned a pass-blocking grade of 89.8, ranking first among AFC North offensive tackles. He didn’t allow a single sack against divisional foes and allowed just seven total pressures to them (two hits, five hurries). With Thomas now gone, edge defenders might finally be able to get a sack or two against the left side of the Browns’ offensive line.

Mixon had a solid rookie season in the NFL, finishing as the highest-graded running back in AFC North play. He averaged 2.73 yards after contact per attempt against divisional foes, ranking third out of eight qualifying running backs in the division. Mixon also forced 12 missed tackles in divisional games, ranking third among the AFC North’s running backs. With numbers like that, Mixon has proven that he can hang in the tough, hard-nosed AFC North.

Big Ben had only six turnover-worthy passes against the AFC North last season, which was the fewest among all starting quarterbacks in the division. 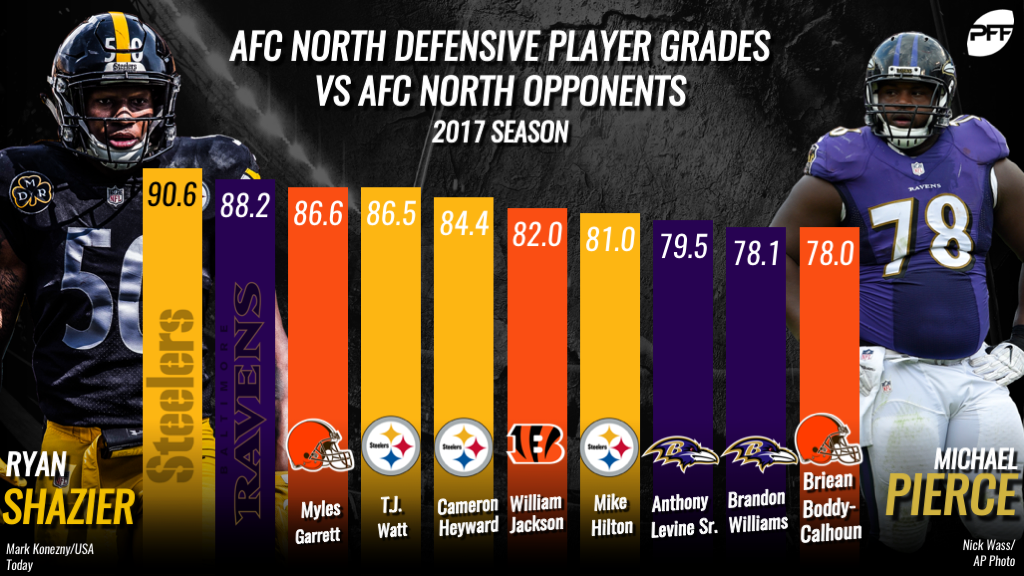 Shazier won’t play football this season, but his recovery so far has been inspiring. Last season, Shazier finished with an overall grade above 90.0 in divisional games, the only player in the AFC North to do so. His play in coverage against the division was remarkable, as he allowed a passer rating of just 72.6, ranking first among AFC North linebackers. Shazier’s career might be cut short due to the tragic spinal injury, but his 2017 season will be remembered as a great one.

Michael Pierce made his presence known in the AFC North last season by being a force in the trenches. His 86.2 run defense grade in divisional games ranked second among AFC North interior defenders, and his 14 run stops were the most. With his overall grade making a big jump from year one to year two, Pierce is on track to be mentioned among the best interior defenders in his third year.

If the Browns had one bright spot in last year’s winless season, it was Myles Garrett. He had a great rookie season, finishing as the top-ranked edge defender in AFC North competition. Garrett won 21.5% of his pass-rush snaps against the AFC North, ranking first among the division’s edge defenders. Look for Garrett to make a leap so big in year two that he will be worth at least one win for the Browns this season.

T.J. Watt had a solid rookie season and did his part to help the Steelers win the North. In AFC North competition, T.J. was by far the best run defender at the edge position, finishing with a run defense grade of 86.2 (almost 13 points higher than the next player). He also led the division’s edge defenders with 12 run stops in divisional games. Watt was also good at rushing the passer, as he generated pressure on 14.7% of his pass-rush snaps in divisional play, ranking fourth out of 17 qualifying edge defenders in the AFC North. Look for T.J. to make a name for himself and move out of his big brother’s shadow in 2018.

Heyward’s run defense played a huge part in the Steelers’ undefeated reign over the North last season; he finished with a run defense grade of 89.6 in AFC North competition, ranking first among the division’s interior defenders. Heyward recorded five tackles for loss or no gain against the AFC North last year, which also ranks first among the division’s interior defenders. With Heyward being such a disruption in the trenches, the Steelers have a great chance to win the division yet again.