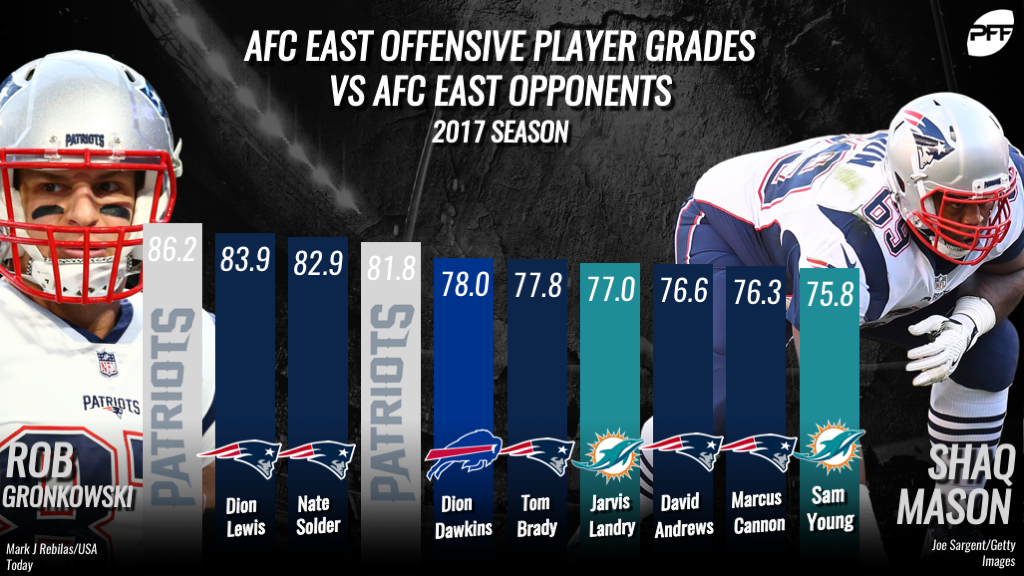 All-Pro tight end Rob Gronkowski has dominated AFC East defenses throughout the last decade, and the trend continued last season with an overall grade of 86.2 against division foes. On 138 snaps in route, he caught 25-of-36 targets for 379 yards, generating a 131.8 passer rating. His five touchdowns against the AFC East led all receivers in the division, while his 2.75 yards per route run ranked first among tight ends. Gronkowski isn’t showing signs of slowing down any time soon and will continue to be a match-up nightmare within the division.

To the delight of division rivals, Dion Lewis moved on from the AFC East during the offseason, but last season, Lewis was a force in the running game and as a pass catcher out of the backfield against the AFC East. The dual-threat back ranked first with 495 rushing yards in division play on 96 rushing attempts, and he was easily the most elusive back in the AFC East, forcing 22 missed tackles in the running game, doubling the next closest runner. As a receiver, Lewis finished with 17 receptions, a 100.0 percent catch rate and his 134.1 passer rating when targeted ranked first among all running backs within the division. Lewis will continue to be a menace out of the backfield with the Tennessee Titans in 2018.

A longtime left tackle for quarterback Tom Brady, Nate Solder has also moved on from the AFC East this offseason. Solder was solid in pass protection last season during divisional play allowing a pressure rate of 7.08% on 212 pass block snaps. Solder finished with a 75.0 pass blocking grade against the division, and of his 15 pressures allowed, only one resulted in a sack. AFC East pass rushers now have hopes of taking down Tom Brady in division play this season as Solder will be protecting the blind side for Eli Manning and the New York Giants this season.

Another anchor along the Patriots offensive line last season, Shaq Mason, finished with an 82.3 pass blocking grade which ranked second among guards in the division. Entering his fourth season in 2018, Mason allowed only eight total pressures on 217 pass block snaps a year ago and was one of seven guards in the division last season to not allow a sack.  With a newly signed contract extension, Mason will continue to demoralize defensive linemen in the AFC East for years to come.

The Bills may have found their left tackle for the foreseeable future in Dion Dawkins. In his first season against the AFC East, the Bills’ second-round pick allowed a pressure rate of 6.71% in 164 pass block snaps and was one of seven offensive tackles that didn’t give up a sack in division play. Dawkins’ standout production during his rookie year made the Bills feel comfortable enough to trade former left tackle Cordy Glenn to the Bengals. With Dawkins and their quarterback of the future Josh Allen, the Bills now have pieces in place at critical positions to rise up the ranks in the AFC East.

Landry’s 48 receptions were far-and-away the most among AFC East receivers, and his 448 receiving yards also led the division last season.

Andrews led AFC East centers with an 83.2 grade in pass protection after he allowed only six pressures on 185 pass blocking snaps against division foes.

In only 38 pass blocking snaps against the division, Cannon didn’t allow a single quarterback pressure. 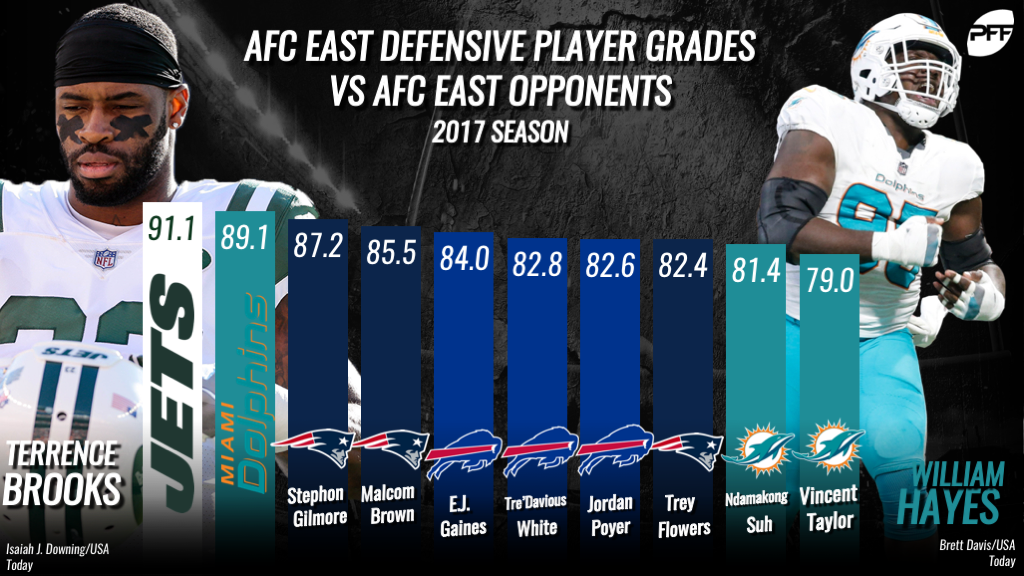 In limited work against the AFC East, Terrence Brooks led all players with a 91.1 overall grade in division play. The fourth-year safety was targeted only three times during his 42 coverage snaps; he didn't allow a single reception and his resulting 89.5 grade in coverage ranked first among safeties and third overall among AFC East defensive backs. Entering his second season with the Jets, the backup safety will look to carve out a larger role and make an even bigger impact against divisional opponents in 2018.

Veteran edge rusher William Hayes is an under-the-radar star on defense and was superb as a run defender, where he graded out at 80.4 in AFC East play before an injury cut his season short. In limited work against his division last season, Hayes recorded three pressures in only 23 pass rush snaps and his 34.8 percent win-percentage on pass-rush snaps ranked second among edge rushers in the division, while his 13.0% pressure rate ranked fifth. Hayes’ recovery is something to keep an eye on this season for the Dolphins, but the 10-year veteran has the ability to cause havoc in the AFC East again in 2018.

Stephon Gilmore was one of the most improved players of the 2017 season, and his play against the AFC East was a large reason why. Gilmore’s 89.5 grade in coverage ranked first among all defensive backs in the AFC East, and his 57.3 passer rating allowed was fifth-best within the division. The seven-year veteran allowed only 13 receptions on 23 targets for 145 yards in division play during his first year with the Patriots. With rookie quarterbacks figuring to play many meaningful snaps in 2018 within the division, Gilmore will have an opportunity to shut-down receivers once again this season.

In his third season with the Patriots, Malcom Brown was a force along the interior defensive line. Brown’s 91.1 grade against the run was by far the best among interior defensive linemen in the AFC East, and his 14 run stops ranked first in the division as well. Brown was also a disruptor against the pass, generating a division-high three sacks and 10 total pressures from the interior. Brown is entering the prime of his career and could be in for another dominating season against division rivals.

E.J. Gaines is coming off of a productive season in the Bills secondary in 2017 and he saved his best performances for divisional play. The fourth-year corner ranked second with a grade of 87.9 in coverage against division foes a season ago, he allowed a 70.2 passer rating while in coverage, and his eight defensive stops against the pass led all AFC East defensive backs. Gaines cashed in his stellar play in 2017 by signing with the Browns during the offseason making the AFC East quarterback’s jobs a bit easier in 2018.

86.2 grade while in coverage ranked fourth among cornerbacks in the division.

86.4 coverage grade in AFC East play ranked second among safeties, and he also led the division with four interceptions.

79.5 grade against the run ranked fourth among interior defenders within the division.