Betting on the total points of a game can take some of the stress out of having to pick a side because it allows you to root for both teams to either score or not score.

However, it introduces a new stressor of determining if a game will be an offensive shootout or a defensive slugfest. To better prepare ourselves for the 2021 college football season, we can build a model that predicts the probability of a game going over its point total and then look under the hood at which variables are most important to determine a win total.

The features used in the model include how each team graded out in the previous year on the offensive and defensive side of the ball, along with their returning production on each side of the ball. The spread and over/under total are also included in the model, as well as whether the home team is favored. 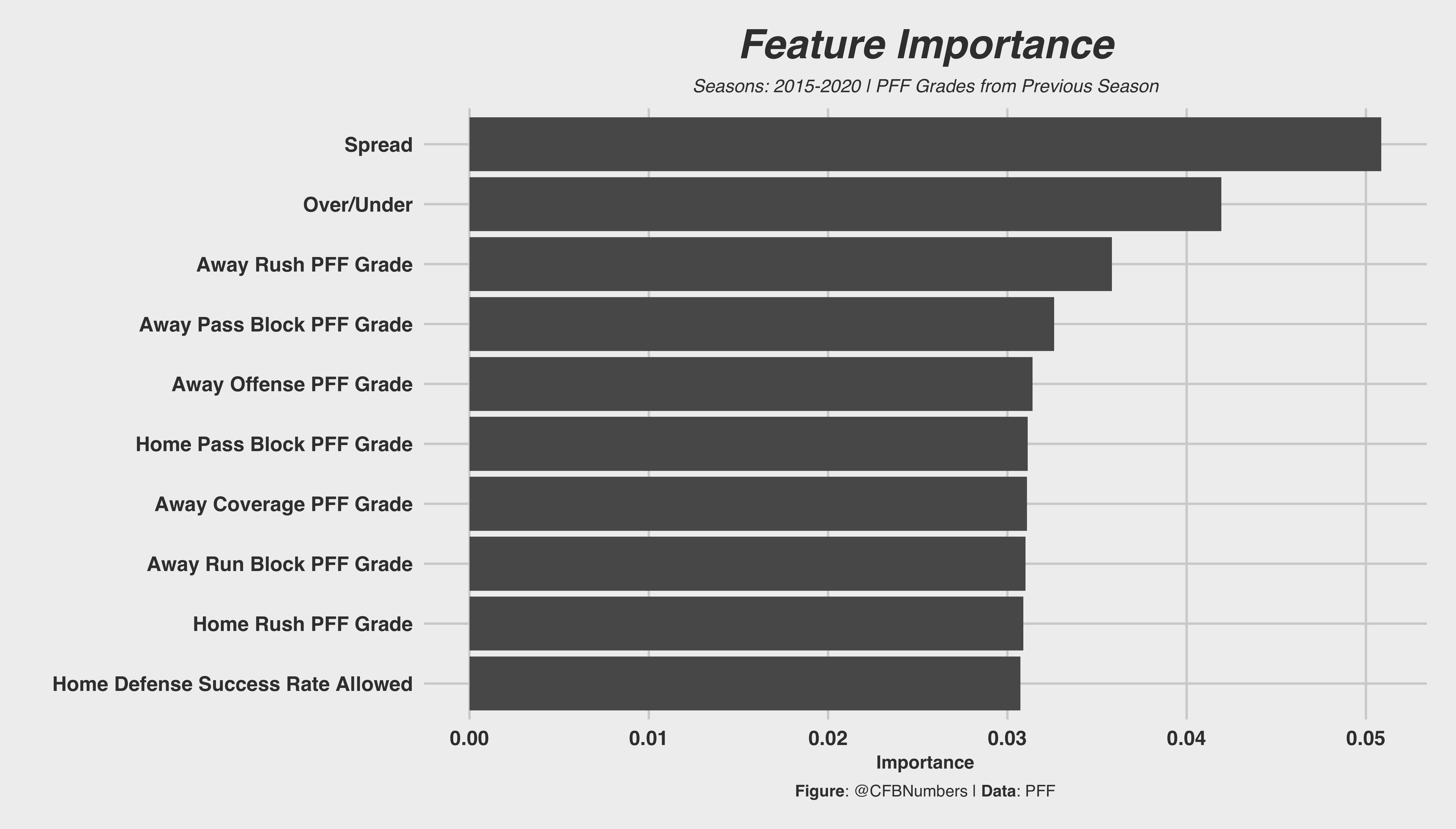 The spread of the game is our most important variable in determining whether the contest will go over its point total. This lines up with conventional wisdom in that games with evenly matched opponents have a better chance of both scoring and driving up the point total compared to a contest with a team being on cruise control after the second quarter while holding a substantial lead.

You’ll notice the away offense is well represented in feature importance. You’ll typically see home teams favored, especially in the early season. That means for the over to hit, we need the away team offense to show some life and contribute to the overall point total.

Finally, to rack up points, the home team needs to build a lead and then maintain and add to the lead with their running game as they look to drain the clock. This is why you see features such as the away team's PFF coverage grade and the home team’s rushing grade included in the top feature list.

Now that we've established the relevant variables, it’s time to see what early over/under lines we can bet for value. 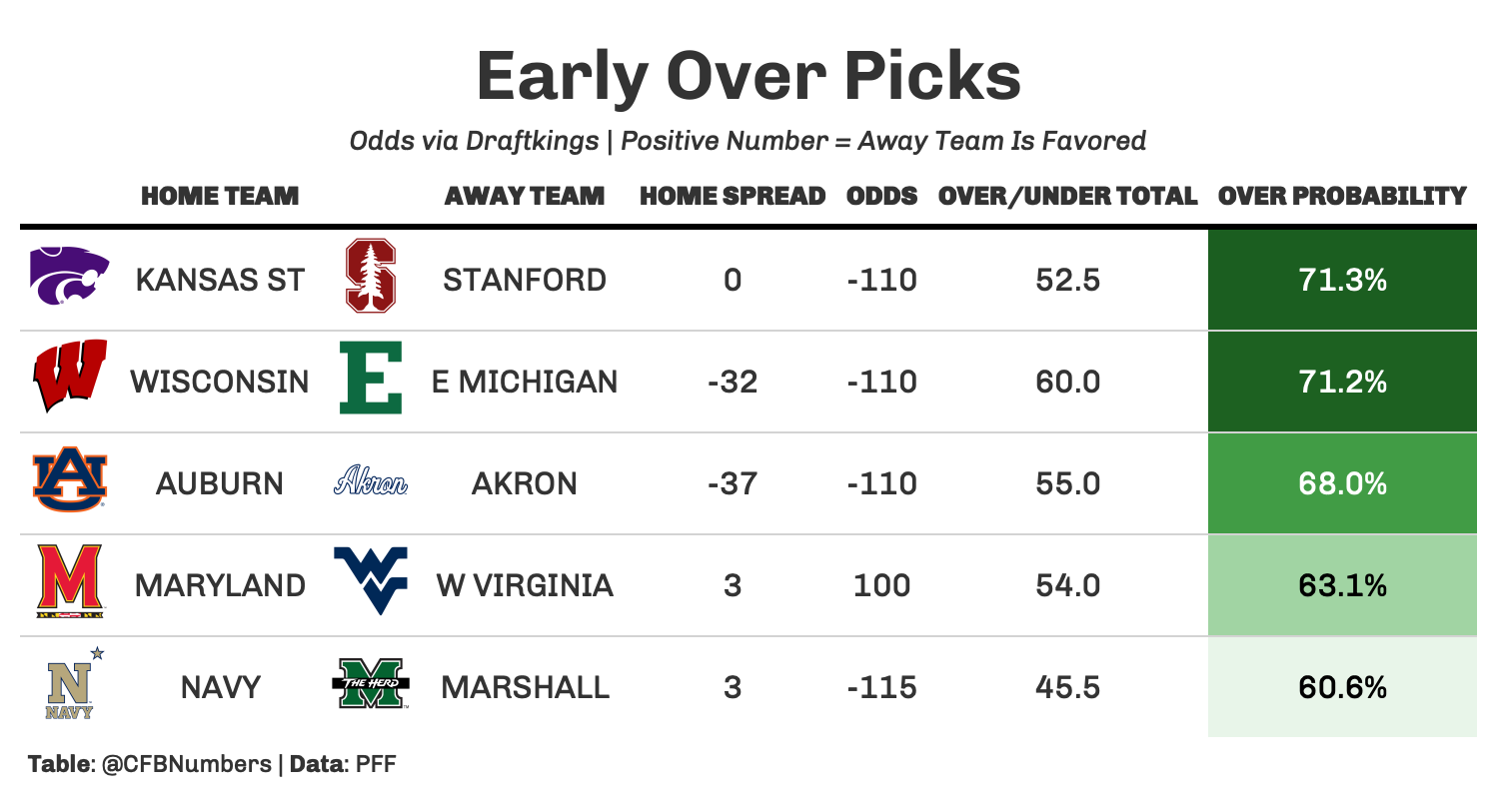 Starting with the over picks, we can see a bit of a mix of tightly contested games and two contests that are expected to be blowouts. Kansas State and Stanford, as of this moment, is a pick'em. Even if the line moves in either direction, it should still be a close matchup to the end.

Stanford's offense graded out at 81.4 in 2020, ranking 28th among 130 FBS teams. The mark was buoyed by an 82.4 rushing grade. On the other side of the football, the Cardinal graded out at 65.4 in pass coverage, which puts them right in the middle of the pack. Kansas State’s offensive strength was in running the ball, a facet in which the team earned a 78.4 grade last season — tied for 70th in the FBS. If the game remains close down to the stretch, both teams can utilize their running abilities to drive up the score.

Wisconsin versus Eastern Michigan is the other game with over a 70% chance of hitting on the over. At first glance, we can see it's expected to be pretty one-sided in Wisconsin's favor. So, how can we expect this game to hit the over?

The answer lies in Eastern Michigan.

Last season, the Eagles' offense graded out to a respectable 76.5 (50th in FBS), including a 78.2 passing grade. If the unit can continue that production, it may be able to muster some points from behind in this contest. Eastern Michigan also struggled defensively in 2020, especially to defend the pass. They graded out at a paltry 52.5 in pass coverage, ranking 109th of 130 FBS squads. Look for quarterback Graham Mertz and Wisconsin to roll, with the Eagles throwing up some points to drive this one over the point total. 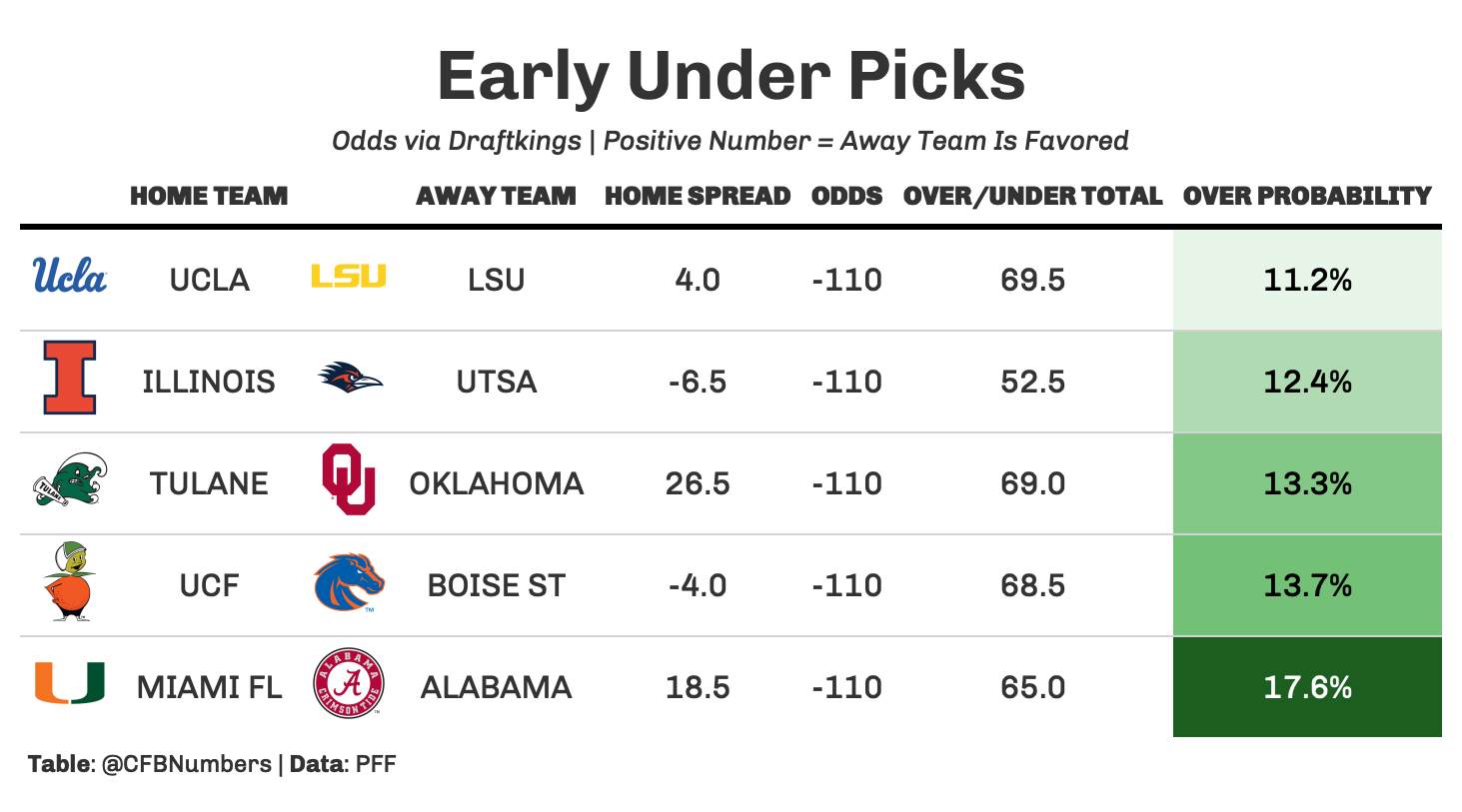 One thing you’ll notice with these under picks is that the current over/under totals are rather high at the moment, with the exception of Illinois–UTSA. As we saw earlier, the over/under total is important in our model, and higher point totals can be hard to reach even for elite offenses. Both the LSU and UCLA offenses last year were above average (79.8 offensive grade for LSU, 76.0 for UCLA), but 70 points is hard to reach. This is especially true after you factor in the injury to LSU's presumed starting quarterback, Myles Brennan.

Illinois is a 6.5-point favorite against UTSA, and the strength of the Illini offense is the run game. The offense graded out at an 81.5 last season in that facet, good for 49th in the country. Couple that with an average run defense for UTSA (67.8 run-defense grade) and a putrid 42.4 tackling grade (124th in the country), and we can start to see the story of this game develop. Illinois builds an early lead, then puts the game away with its bread and butter — the rushing attack.

Let's wrap things up with Alabama–Miami. Despite grading out as the second-best offense in the nation last year, the Crimson Tide don’t return much on the offensive side of the ball. The Hurricanes' defense was slightly above average last year (57th in the country) but returns essentially everyone. This is a recipe for an offensive stalemate. I have Miami covering the 18.5-point spread with an 83.4% cover probability in my previous article, but this game ultimately has more of a 24-20 feel than an offensive shootout.

Information is power in the betting world. The more research and information you do, the better your chances of hitting on your bets. And aside from PFF betting articles, one of the most powerful sources of information is the PFF Betting Dashboard, featuring PFF Greeline. Cover probabilities, line movement history, team rankings and much more are at your fingertips with the 2021 college football and NFL seasons about to begin.