• PFF Greenline still finds value on Tampa Bay -3 vs. Rams, despite this not being the best of the number.

• Try PFF's betting dashboards for free by signing up to PFF+ today.

• We'll likely hear all week, “the sharp side” is on the Colts, and given it's the direction Greenline leans, this looks like a perfect early opportunity to pick up some CLV by kickoff.

Let’s start by checking where the spreads in Week 9 have been at critical points in the past.

To start, let's take a look at the prior week injury information for every team and what that means for their outlook in Week 9. 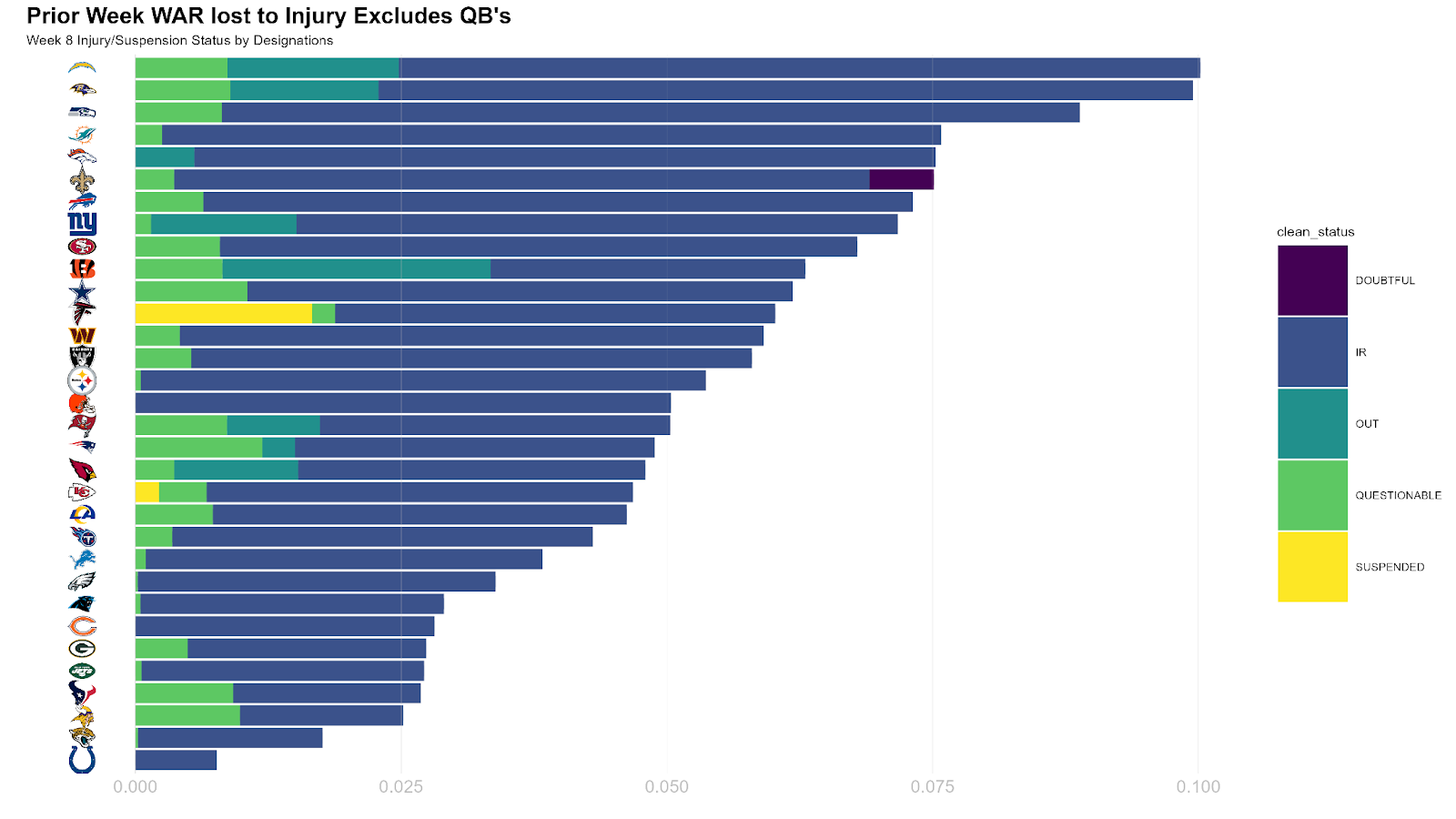 There are a few reasons for potential spread movement in this AFC matchup. For one, the current line sits comfortably between 3 and 7 with no key numbers offering much initial resistance in either direction.

• The Indianapolis Colts fired offensive coordinator Marcus Brady Tuesday morning: They rank 29th in EPA per offensive play, mainly because they're the second-worst team in EPA per rush play, despite still having 2021 rushing champion Jonathan Taylor. Rumors circulating about Nyheim Hines‘ potential departure via trade make this a situation where addition by subtraction somehow needs to work out.

• The perplexing early-week spread movement buys into Indianapolis:  with Cris opening at -6.5, and current consensus already down a full point to 5.5. Part of it could be concerning injury situations with the market digesting news coming out of Week 8. The other part might just be the realization that Sam Ehlinger is exactly what this Colts offense needs with his ability to scramble offsetting struggles in pass protection.

• Bet Colts +5.5 now: Ehlinger's rushing ability opens up more lanes for Taylor: and the second-year passer seems capable of making just as many throws as the current version of Matt Ryan. We will probably hear all week “the sharp side” is on the Colts, and with that the direction Greenline is leaning seems like the perfect early-week opportunity to play and pick up some CLV by kickoff.

• Cooper Kupp's ankle: The biggest pending injury situation for Week 9 currently is the status of Cooper Kupp’s ankle, especially with the pitiful performance of the Cincinnati Bengals offense sans Ja’Marr Chase Monday still fresh in every bettors' mind. Kupp has been the only functional part of a disastrous Rams offense that would be completely lost without him. Early reports point toward him playing, but this is a situation where practice status will be critical in determining how things play out Sunday.

• Rejuvenation in Tampa?: The Tampa Bay Buccaneers are coming off a much-needed “mini bye” and should finally have their secondary fully back and healthy for this matchup. It's also possible Tom Brady could bring  a rejuvenated presence to this Week 9 matchup, with his high-profile divorce from Gisele Bündchen now official.

• PFF Greenline points toward the Bucs as the correct side: Showing 0.8% value at a -110 price. It’s difficult to see this one moving off the key number 3 unless things really go sideways midweek for one of these teams, but there’s still plenty of value on Tampa despite this not being the best of the number.