• Parlay Jaguars alt line -5.5 + Over 42.5 (+310): Analytical profiles suggest the Jaguars are the superior team, despite being 3 games worse than the Giants.

• Giants' propensity to blitz and play man coverage fits directly into the strengths of Trevor Lawrence, putting the Jaguars' offense in a good spot.

• The recent growth of Travis Ettienne in Jacksonville offense bodes well for the home team with an advantage in the trenches.

We spoke last week about pricing in change — and how change is the name of the game during these middle weeks of the betting season — which led us to betting the Jets, as the market was slow to adjust to the Packers. This week’s piece once again centers around how to price in the early season volatility of the Jaguars — and the surprising Giants, who are off to a 5-1 start.

The market is pricing the Jaguars at well-below league average, despite efficiency suggesting they're a top-10 team. Against an overrated Giants defense propped up by poor opponents, with the matchup angles favoring the Jaguars, Jacksonville can ride its offense to a dominant win.

º The belief here is that the Jaguars are better than their record indicates and will score handily to beat the Giants. Rather than bet the alt total at worse odds, we will bet on the Jaguars beating their expectations on offense and covering the -5.5 and the total.

º To know how to price in change and where our views differ from the market, we first need to understand where the market prices in these teams. 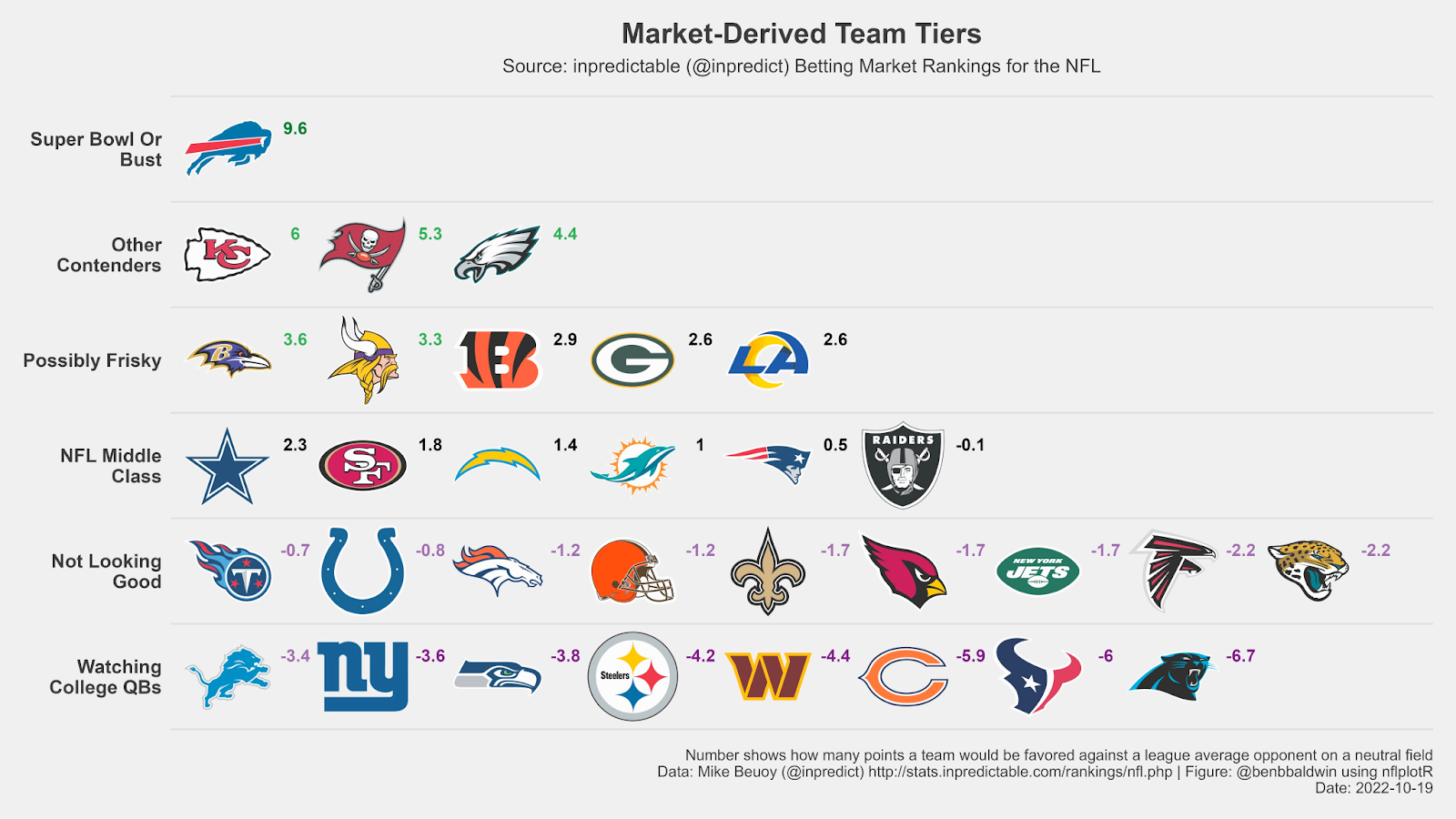 • Courtesy of @inpredict and Ben Baldwin (@benbbaldwin), we can see the Jaguars are being priced in as the 23rd-best team in the NFL.

• Using consensus market ratings from media brands — PFF, 538, ESPN, FO, Inpredict — Jacksonville is ranked 17th by the market, suggesting a gap and potential value on the Jags in this spot. 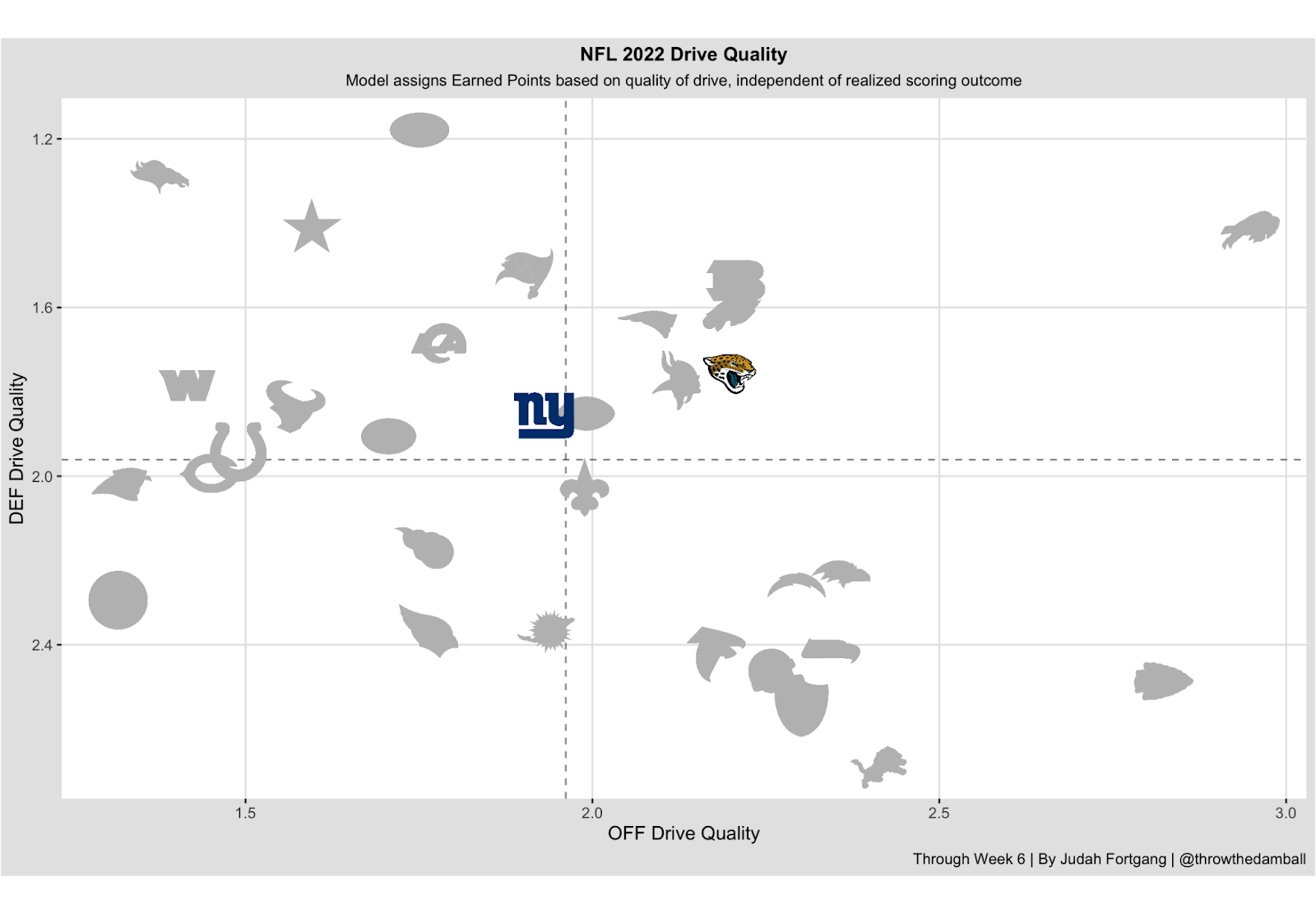 º EPA/Play suggests a similar story with the Jaguars being a top-10 team, but diverges from Drive Quality in their view of the Giants:

º The analytical profile — whether using EPA, Drive quality, or market rankings — suggests the Jaguars are the superior team, despite being 3 games worse than the Giants.

The Giants' average defense might merely be a product of their poor opponents:

º We’re not only betting the Jaguars in this spot, we are also suggesting this game will go over on the backs of the Jaguars' offense. Consider the Giants' opponents and how their defense might be closer to the 22nd EPA rank than 15th overall.

º The opponents have been about as bad as it can get. Although their defense has allowed the 7th-fewest points — which is likely contributing to the low total in this game — the Giants have yet to really be tested defensively, aside from Baltimore.

Matchup Angle 1: The Giants blitz a league-high 50% of the time, and play man at the 4th-highest rate in the NFL. Trevor Lawrence has dominated both the blitz and man coverage: 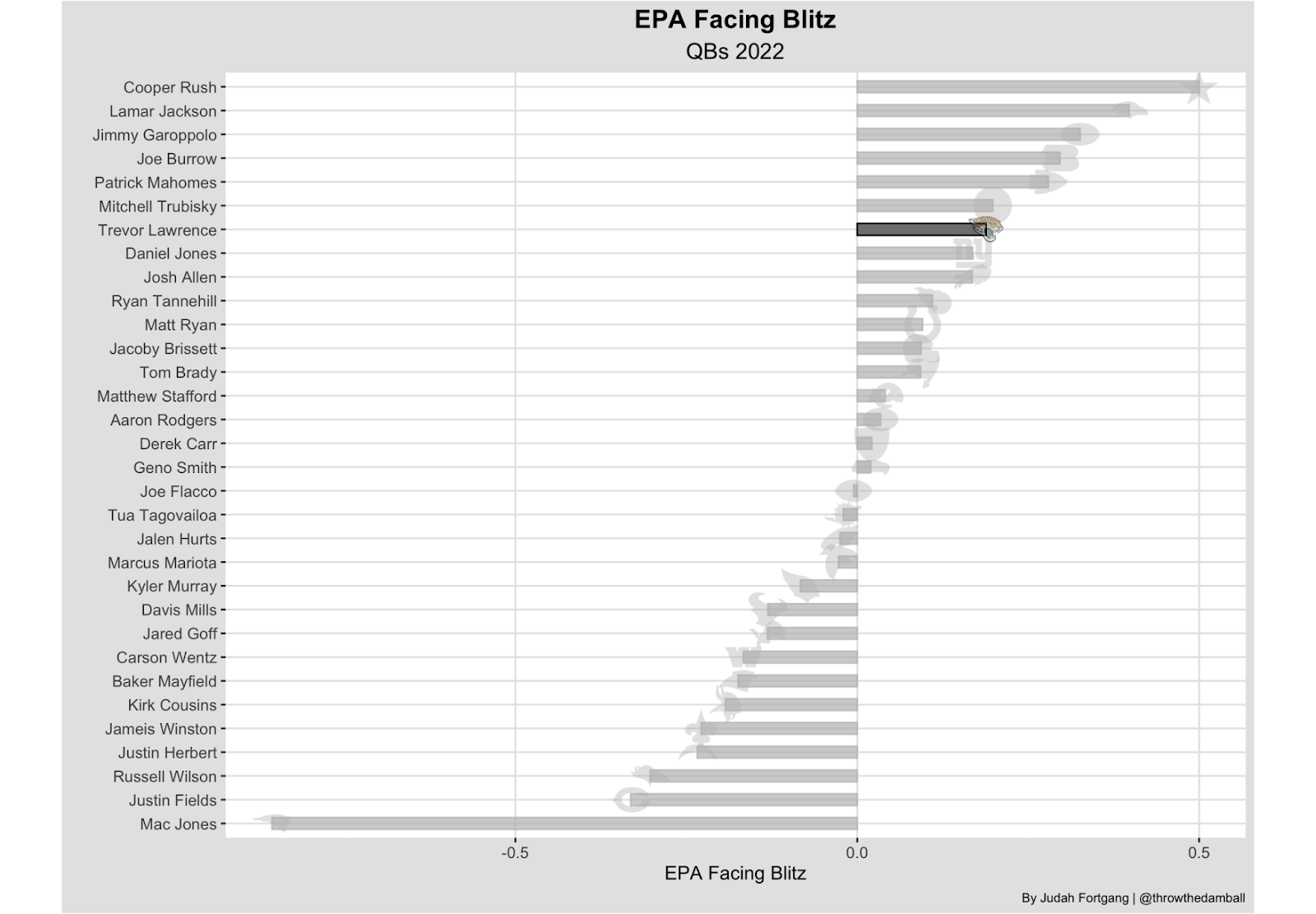 º Lawrence will be blitzed early and often in this spot, but his .19 EPA against the blitz is 7th-best in the NFL so far 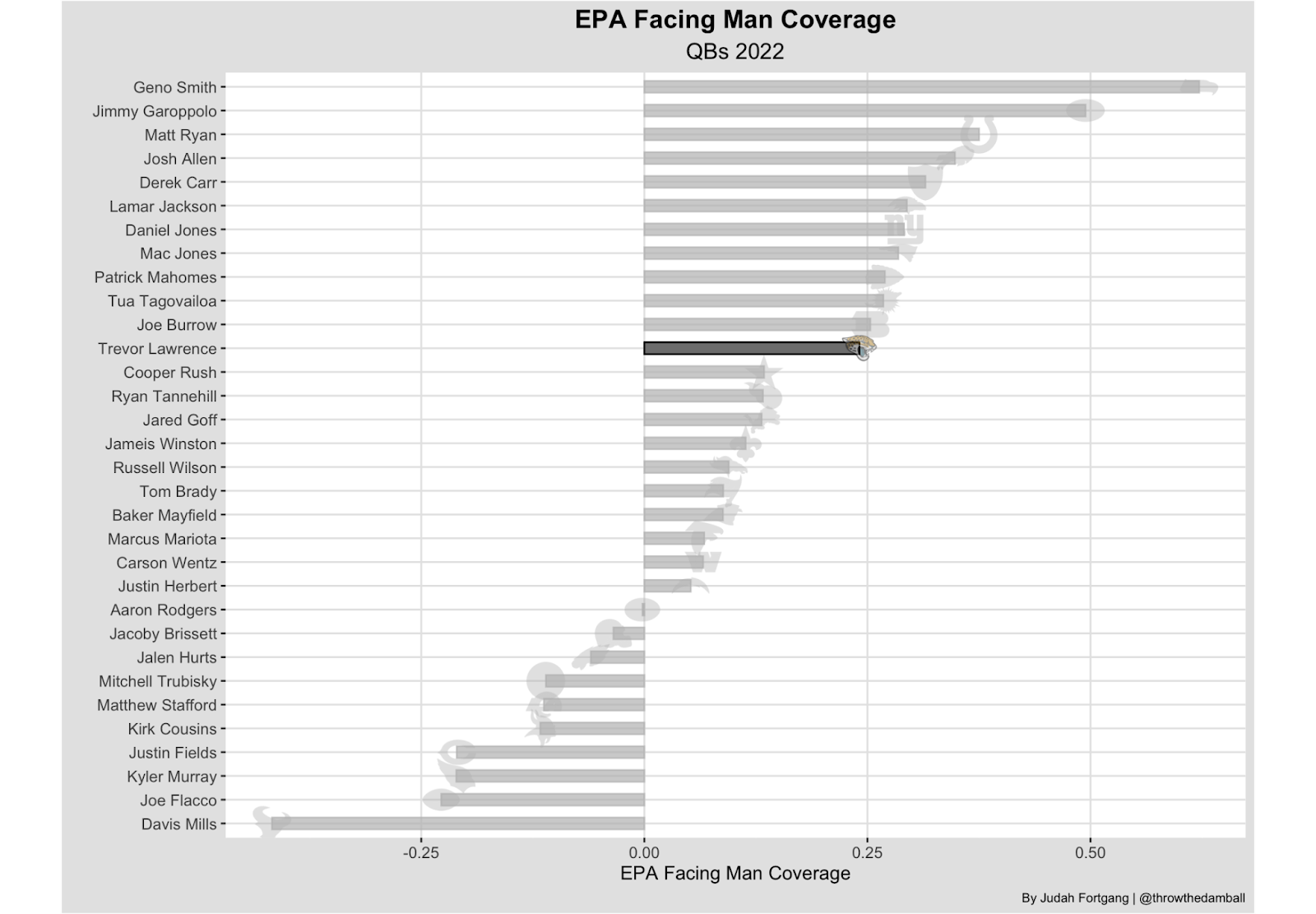 º Against man coverage, Lawrence is 12th in the NFL with a .25 EPA — a number, if extrapolated over the course of a season, that would make him an MVP candidate.

Matchup Angle 2: Jaguars have advantage in the trenches and a young back whom they're leaning on increasingly in Travis Ettiene:

º The Giants are 4th-worst in EPA against the rush, and are allowing a league-worst 5.6 yards per carry; the Jaguars are 15th in Rush EPA, and 11th in yard per carry. 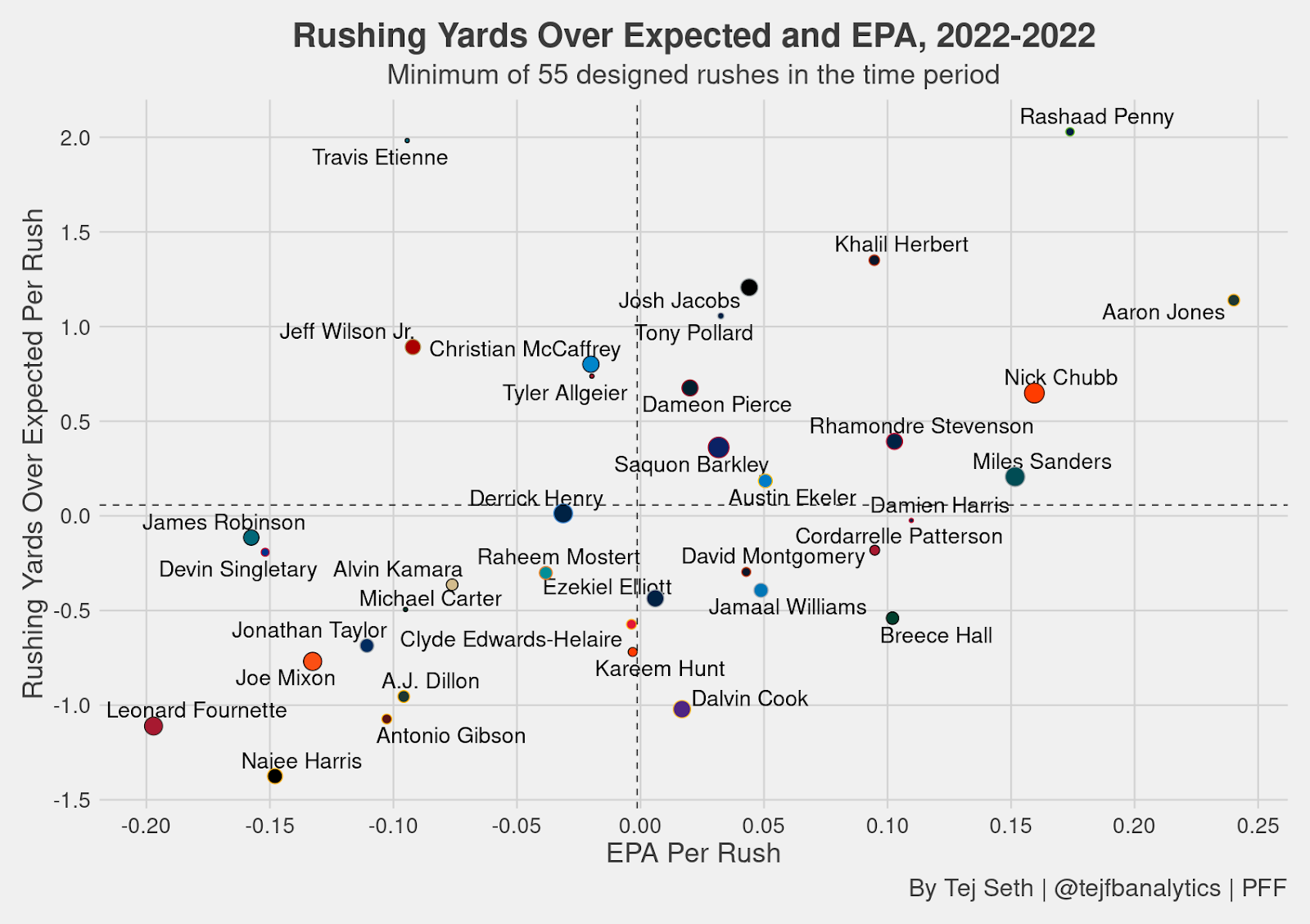 º But as Travis Ettiene continues to develop more of a role in this offense — he's finally leading in snaps over James Robinson each of the past 3 weeks — these efficiency numbers should improve. Ettiene has been very successful in PFF colleague Tej Seth’s RYOE.

º If the Jaguars jump out to a lead, their ability to lean on Ettiene and continue to run the ball efficiently should enable them to put up points deep into this game.