• Up nearly 30 spots from his rookie season in PFF grade and EPA/play Zach Wilson appears markedly improved, and being early on a trend is the best way to leverage tails and cash a bet at big plus odds.

Week 6 puts us in a unique position within the betting season and is the necessary backdrop to understanding this bet.

Whereas testing off-season hypotheses define early-season betting, these next few weeks are largely about pricing in change. It is about understanding and balancing off-season priors with the new data from 2022 and seeing which divergence from those priors are noisy and which carry signal. Which long-term views are moving too slow relative to market pricing, and which are moving too fast?

The belief here is that the market is moving too slow to upgrade the Jets and too slow in downgrading the Packers, leaving room for opportunistic bettors to capitalize.

Where are these teams being ranked? Our graph belows helps us to understand. 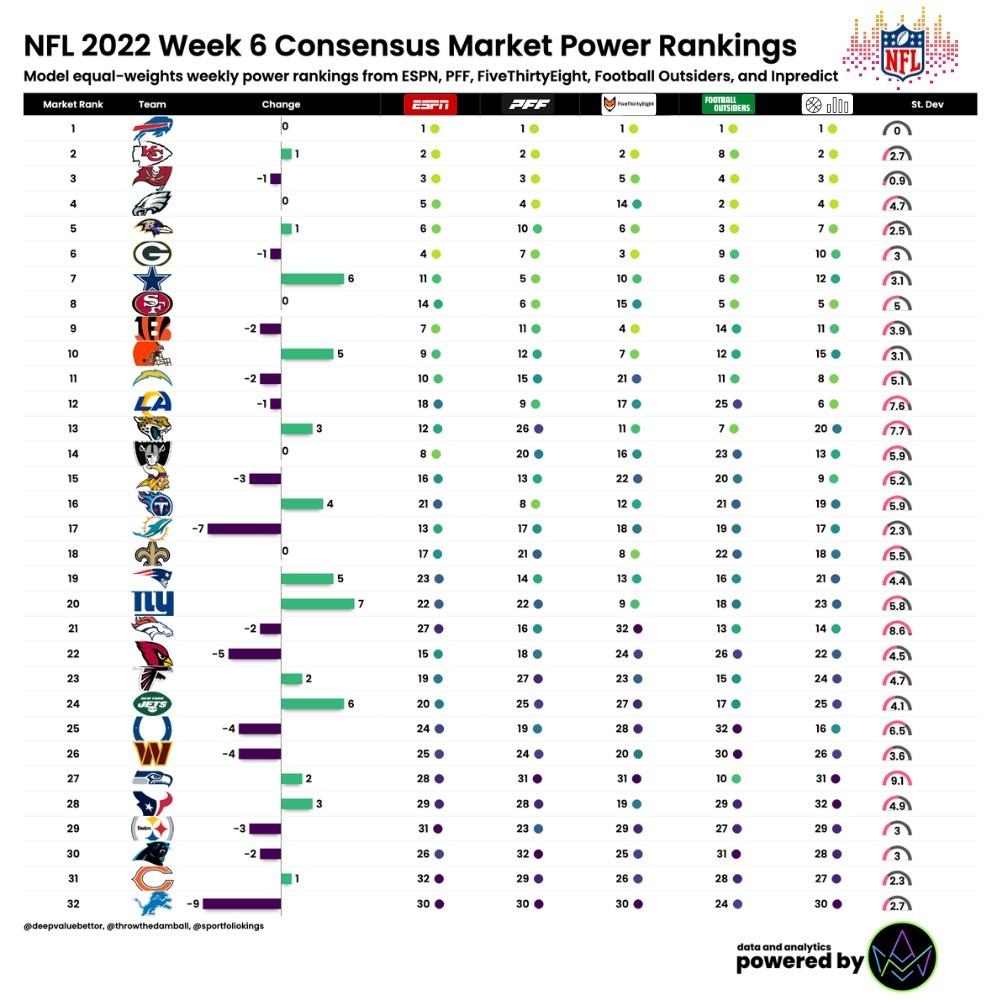 Using a bunch of different media and market proxies, we can begin to quantify and see how the market views both of these teams. The consensus market view on Green Bay is still that of an upper echelon team (No. 6 on the graph), and the Jets near the bottom (24th).

Despite drastic differences in power rankings, these teams have performed roughly equally well from a fundamentals standpoint. 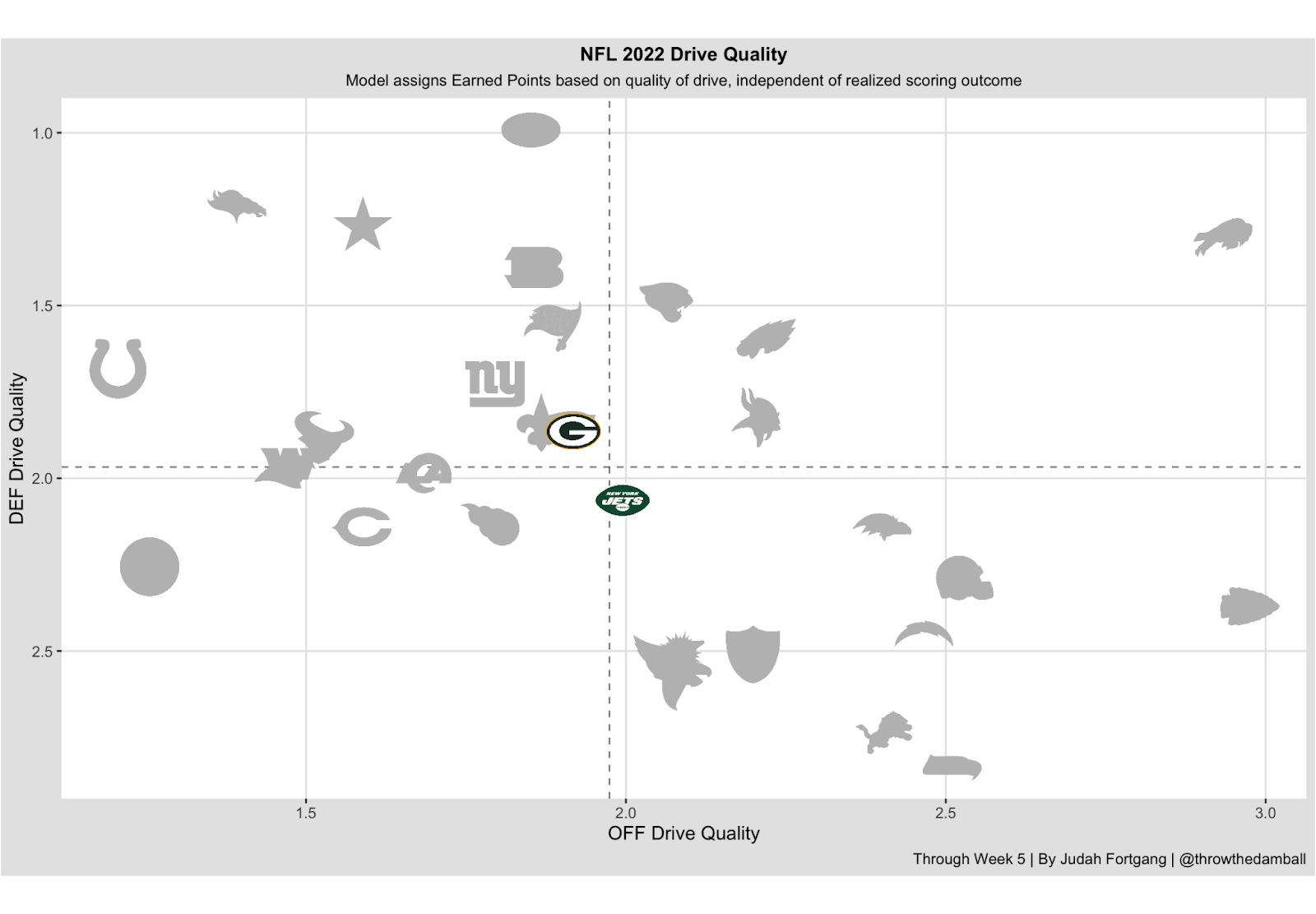 What this graph illustrates is that in terms of moving the ball, these teams have played at roughly the same caliber through these first five weeks and are both right around league average — or at least in the same tier in terms of production. Lest we forget, the Jets were without Zach Wilson for the first 3 games. In a smaller sample, of course, the Jets' EPA with Zach Wilson is higher than the Packers' EPA in five games with Aaron Rodgers.

Angle 1: Zach Wilson is not the same QB as he was in 2021, and the market pricing has yet to catch up

By any account, Zach Wilson really struggled in his rookie season. And it is likely this Wilson skepticism is baked into the No. 24 market rankings and the Packers as big favorites Sunday.

Now, it is only two games for Wilson, and there still is massive uncertainty regarding his play. I’m by no means suggesting this is a good futures bet to make. But we’re in the mode of leveraging tails, and there is at least good evidence to suggest Wilson has made serious improvements, and it is early 2022 season returns that should be most influential in our evaluation.

Why? QBs tend to improve as they progress from Year 1 to Year 2, and Zach Wilson is showing early signs of improvement in 2022 that should not be ignored in this spot. Again—and it is worth repeating—being early on a trend of evidence before the market prices it is precisely the kind of play where we can leverage tails and cash a +470 bet. Let us look at a series of graphs from PFF’s Kevin Cole, which suggest areas of improvement for Wilson in his sophomore season. 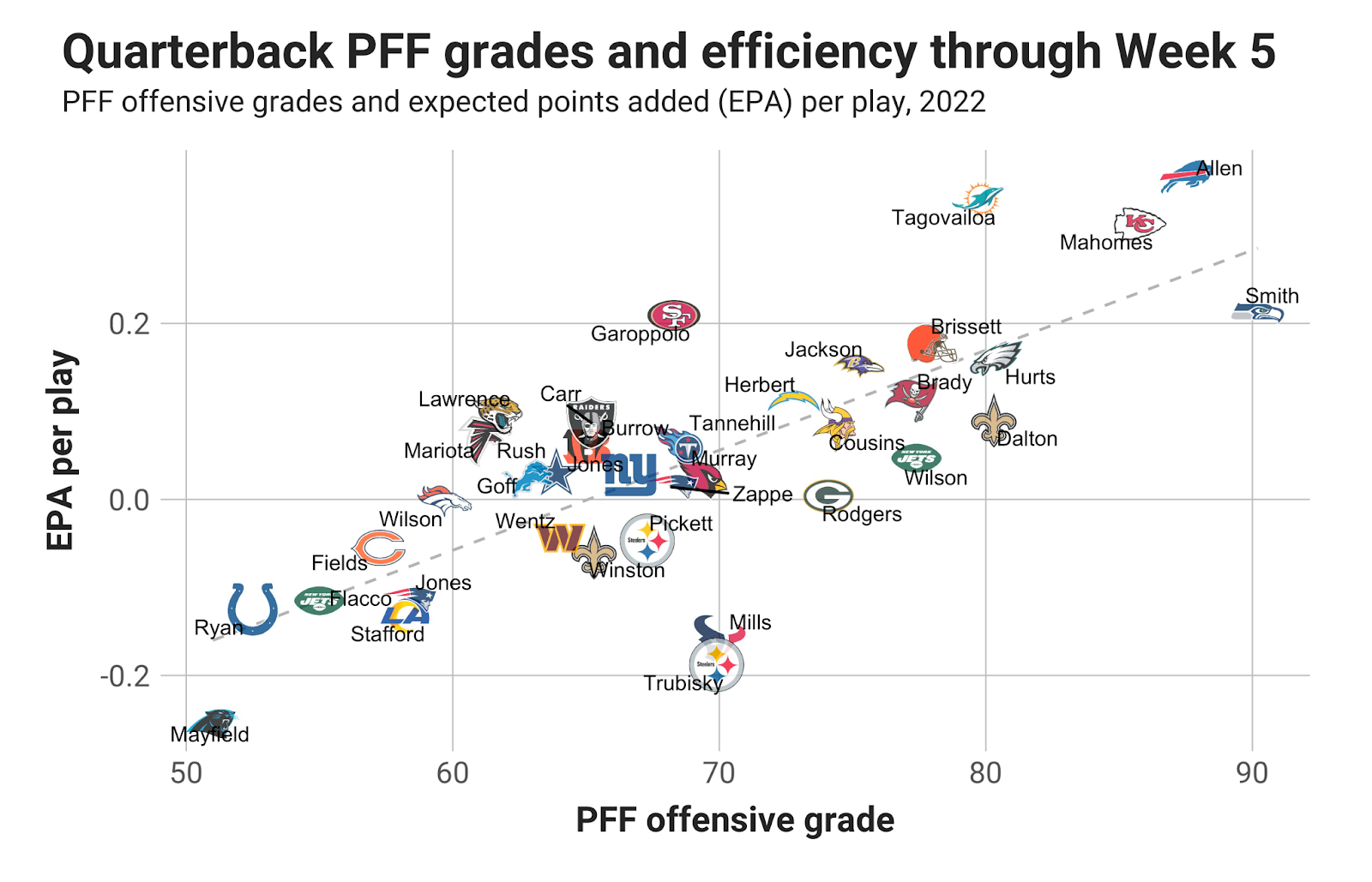 In production metrics, Wilson has improved this year. After finished his rookie season as PFF’s 33rd-best QB, Wilson is 8th so far this year. His EPA has similarly jumped close to 30 spots early on this season. Facing the Dolphins and Steelers, his production might be fluky, but it is not simply a function of facing bad defenses. 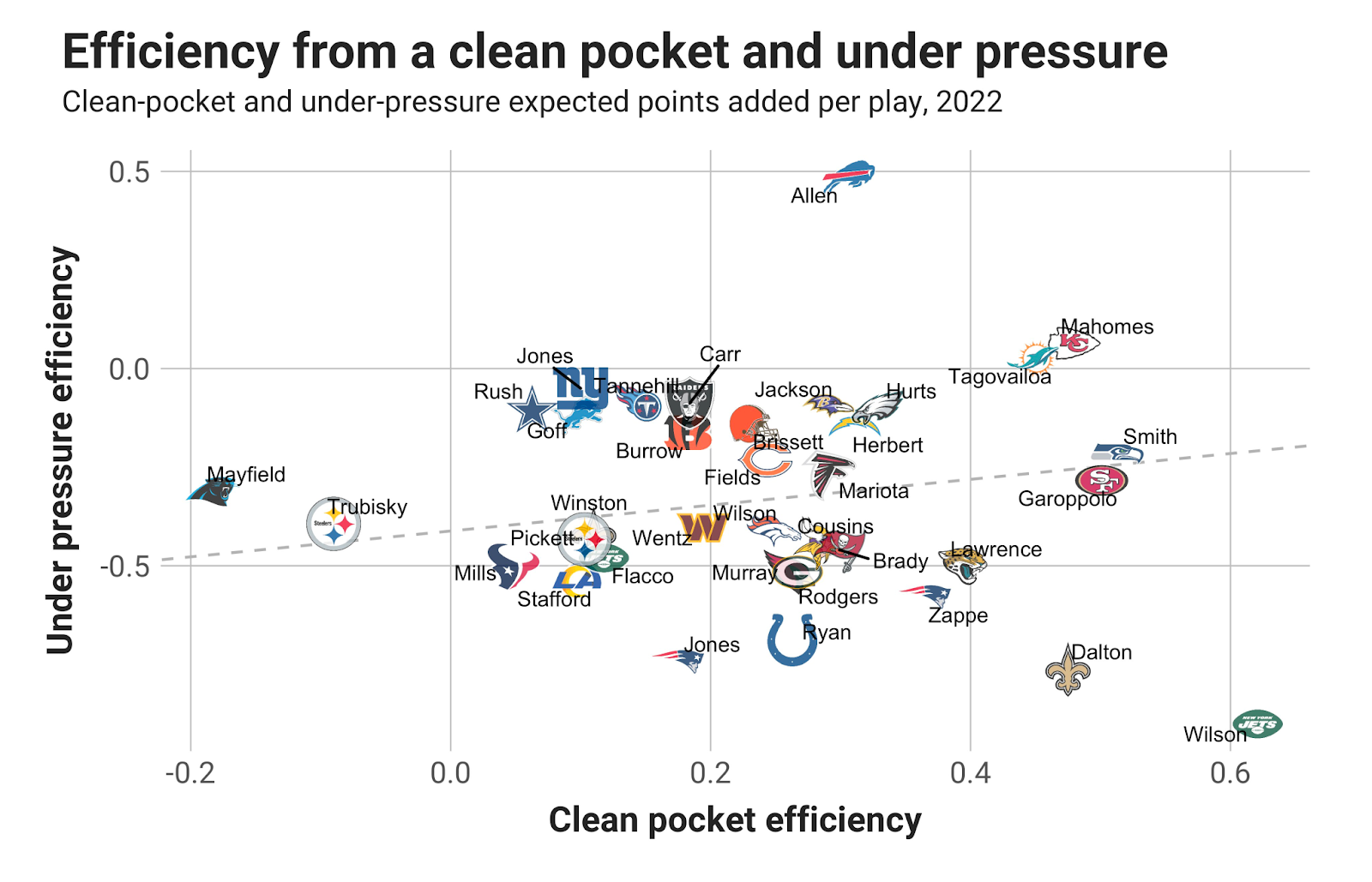 Breaking it down more granularly, Wilson has been absolutely elite when throwing from a clean pocket — which is one of the most stable metrics according to our findings here at PFF.

Last season, Wilson was 13th percentile in the same category, which lends some evidence to the idea that he has improved as a passer and has subsequently improved his production.

If anything, according to what we know about passing, Wilson should experience some positive regression. His play under pressure converges more to the mean given the unstable nature of playing under pressure. 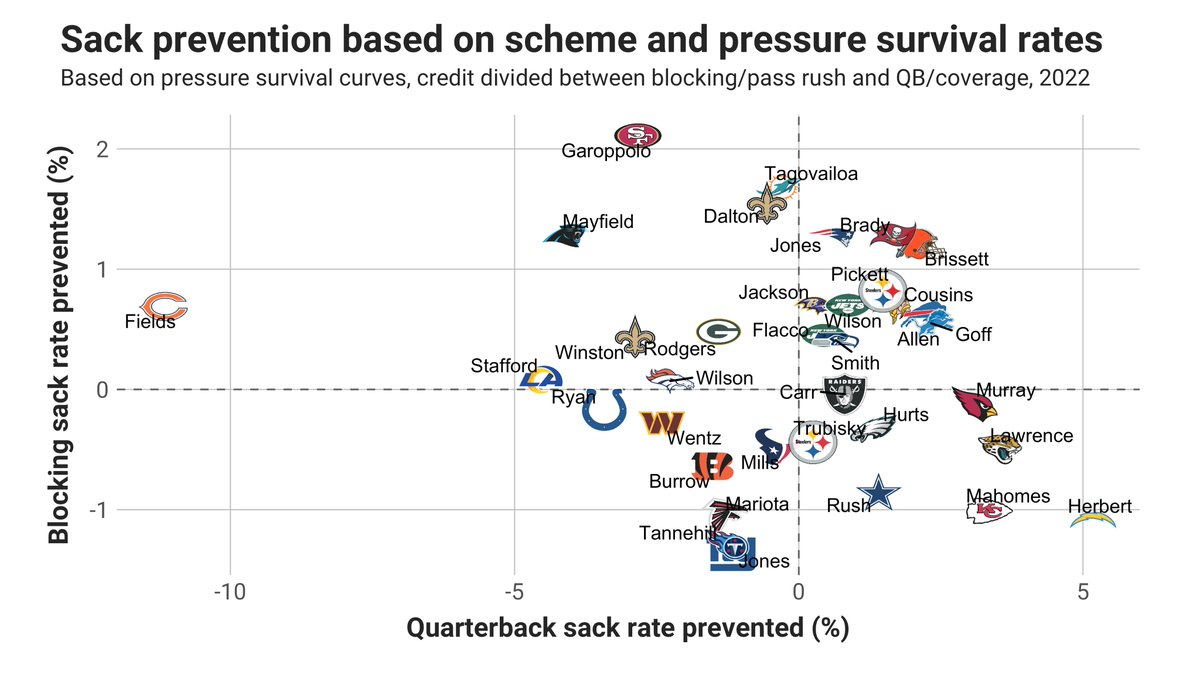 Further cementing the case of improvement for Wilson is that he has seemingly fixed some of his sack troubles that plagued his rookie season. Last year, Wilson was 3rd-worst in the NFL at taking a sack when pressured (26% of the time). That number is down 15% this year, to 10th-best in the NFL.

It is also worthwhile to note that in all three of these charts, Wilson is in a better position on the graph than Rodgers. And while it's a better discussion for another time, it might suggest that Rodgers himself is on the decline despite the market still pricing him in as elite. I see potential leverage.

Bottom line: it’s certainly a small sample, and Wilson might regress to his 2021 self. But why not bet on the upside in this spot? As the market prices in 2021, he might just be a new-and-improved QB, as early 2022 returns suggest.

It is not just the disparity in fundamental value and pricing, but there are also a few key matchup angles that has me on the Jets moneyline and alt line.

Angle 2: Jets can get pressure to force non-perfect blocked plays, and Rodgers sees a big difference when plays are perfectly blocked vs. when they are not

Aaron Rodgers has been masterful throughout his career, but an area in which he has struggled—at least since 2019, when PFF began to collect this data—is when the play in front of him is not perfectly blocked. 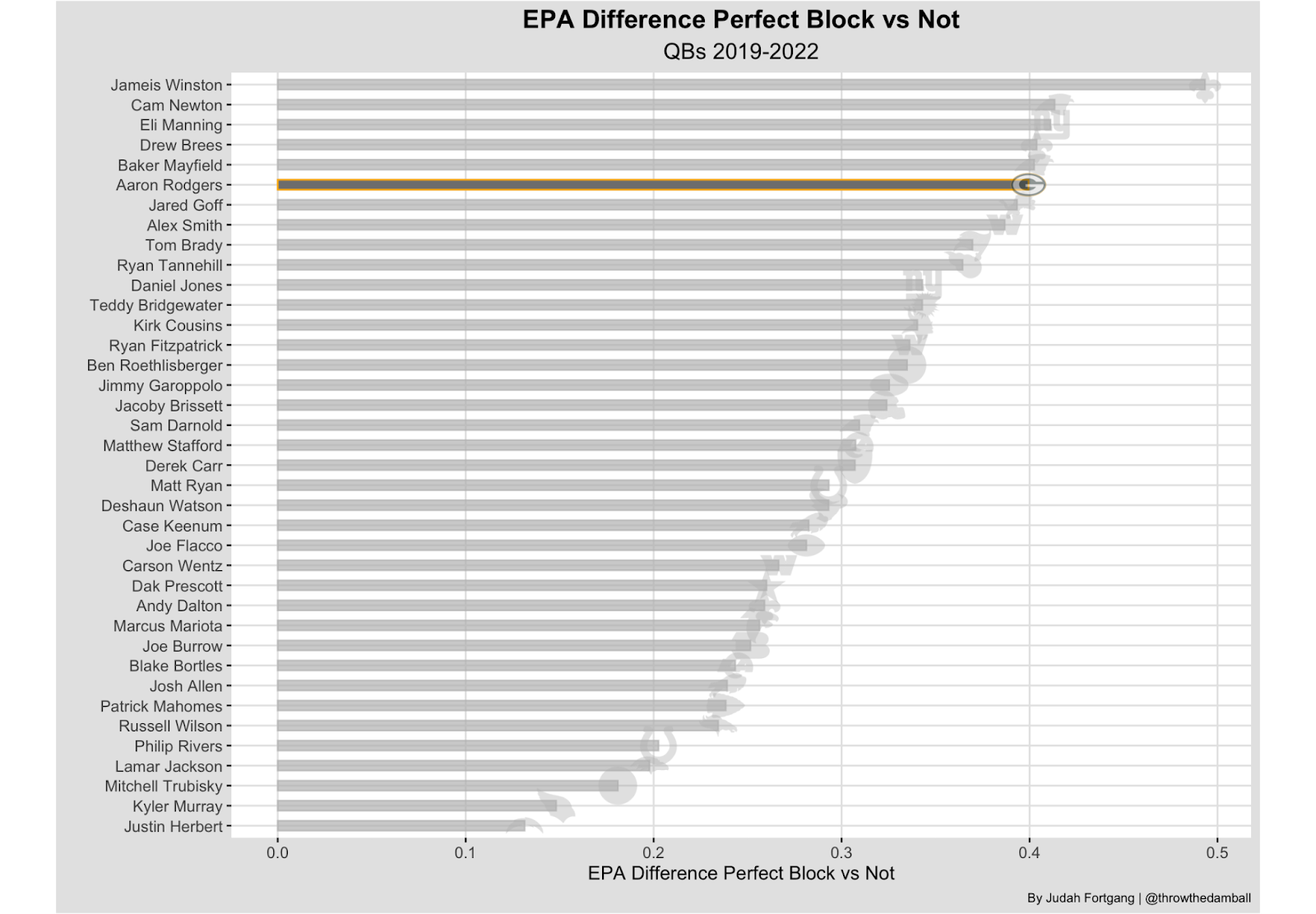 Unlike Mahomes, Herbert, Murray, etc., Rodgers' play varies greatly depending on the strength of his blockers. He has an EPA of 0.29 on perfectly blocked plays, and -0.11 when they're not blocked perfectly.

And with the emergence of Quinnen Williams, and Carl Lawson returning to health, the Jets are 5th-best at forcing non-perfect pass blocks — with 44% of plays being not perfectly blocked. Should the Jets D-line play to its season average, Rodgers might be in trouble often in this matchup.

Angle 3: Rodgers will be throwing into lots of Perfect Coverage

To make matters worse for Rodgers, in addition to having to mitigate potential offensive line issues, he’s likely to be facing loads of perfect coverage. 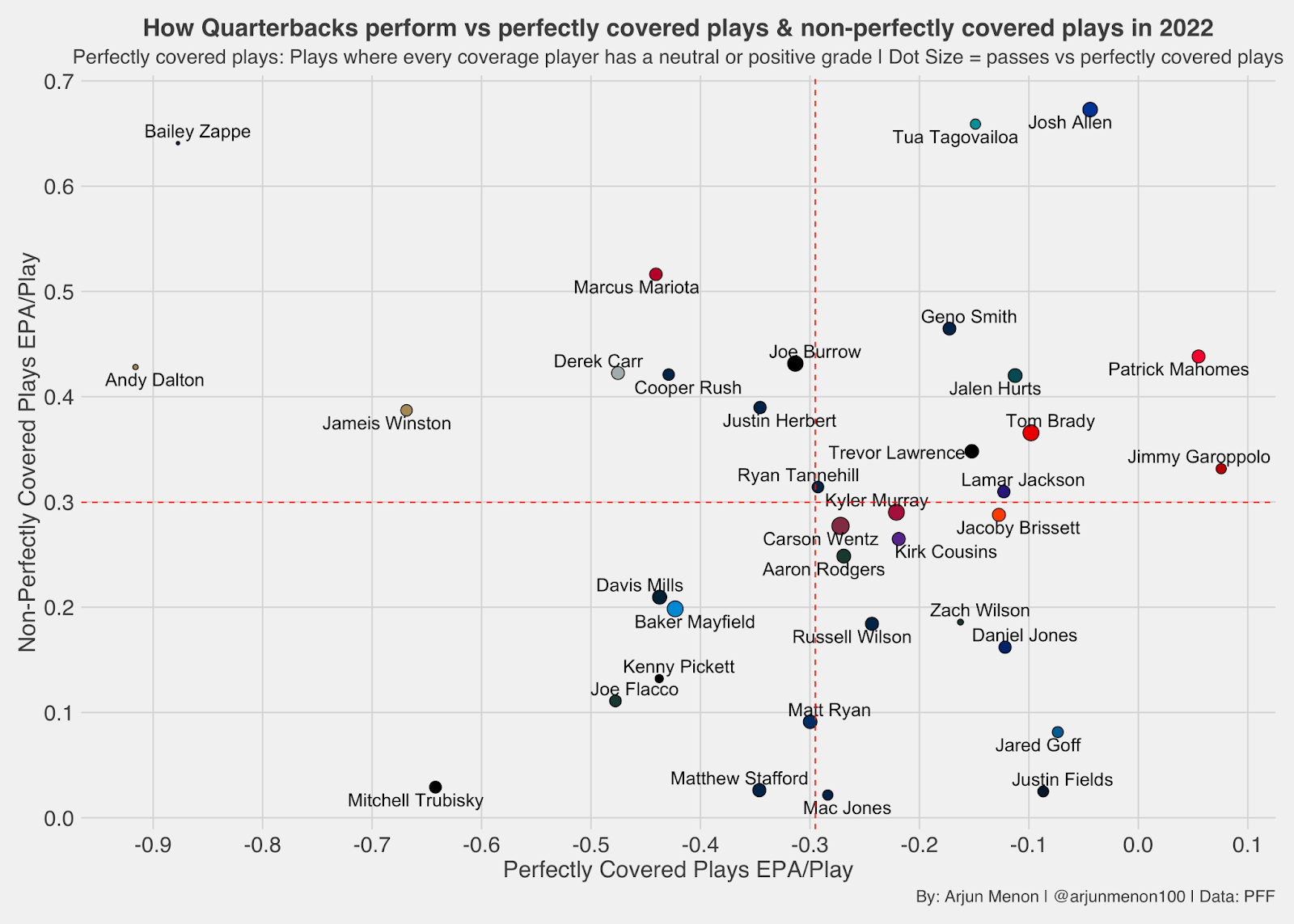 As PFF’s own Arjun Menon showed in the graph above, Rodgers is playing right around league average on Perfectly Covered plays, but he still is averaging close to -0.3 EPA lost every time he drops back into perfect coverage. Dropping back nearly half the time into perfect coverage is a recipe for trouble for Rodgers in this spot.