• PFF Greenline likes the Giants -9.5 at Cowboys: But holding out for an even better number looks like the best way to cash this bet on Thanksgiving.

• Vikings -2.5 vs Patriots looks like a gift on Thanksgiving, per Greenline: The takes regarding both offenses will be hot after ugly Week 11 showings. Remember, Minnesota has the better quarterback and better overall offense.

• Chargers-Cardinals o47.5 is intriguing: The real play could be on the total going over 47.5. If both teams receive some positive injury news, it will push the offenses even further ahead of the defenses in this matchup.

Let’s start by checking where the spreads in Week 12 have been at critical points in the past.

To start, let's take a look at the prior week injury information for every team and what that means for their outlook in Week 12. 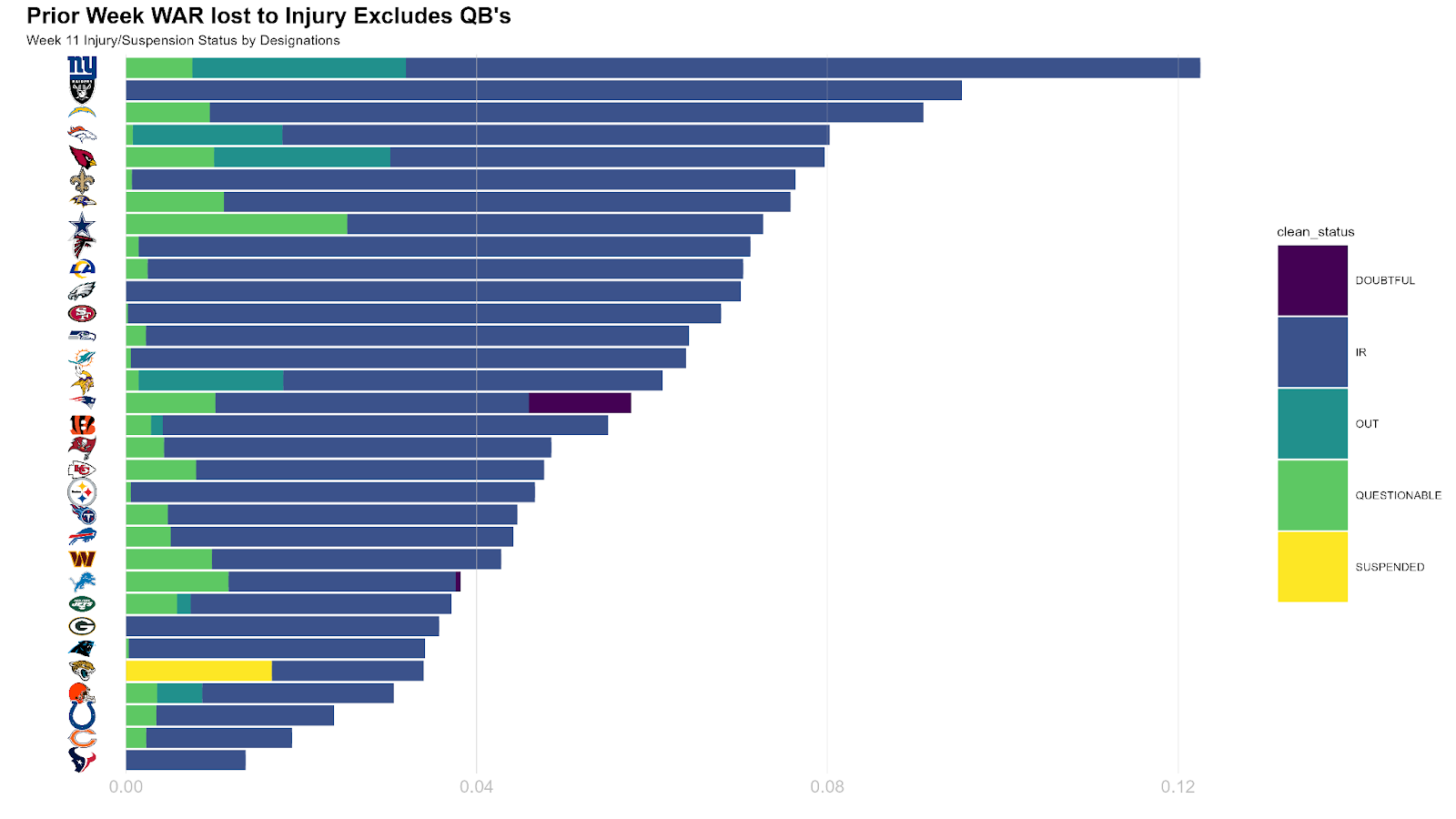 • Giants are reeling after being decimated by injuries in Week 11: And now they travel on a short week to visit the Cowboys on Thanksgiving. Big Blue's secondary, specifically, is going to be stretched thin, and offense, Darius Slayton must continue performing well above career expectations to  help the Giantskeep pace with a Cowboys offense now hitting its top stride.

• The betting market moved accordingly, with a -7 lookahead likely testing -10 by kickoff: There’s a case to be made for the Giants at the inflated number — especially if any number of the Cowboys' injuries to edge rushers prove to be more serious than initially anticipated.

• PFF Greenline likes the Giants at the current number: But holding out for an even better number looks like the best way to cash this bet on Thanksgiving.

• The Patriots and Vikings both exited Week 11 beat up along the offensive line: The shortened week is going to impact both units, as Vikings LT Christian Darrisaw, Patriots C David Andrews are out, with New England holding its breath on the statuses of Trent Brown and Isaiah Wynn.

• The betting market seems torn on where this spread should land: With -2.5 and heavy juice on the Vikings popping up at some books, while others flip the juice the other way and hang onto -3.

• Laying -2.5 with Vikings looks like a gift on Thanksgiving based on PFF Greenline: The takes regarding both offenses will be hot after they looked like the worst versions of themselves against elite-level defenses in Week 11. Remember, Minnesota has the better quarterback and better overall offense.

• Two teams desperate for a win, but seemingly heading in opposite directions face off in this cross-conference matchup: Los Angeles showed enough offense early in its close loss to the Chiefs to warrant heavy line movement its way, especially after the Cardinals folded over on Monday night. The -2.5 lookahead and opening week number quickly moved to -4.5, with further movement likely in the Chargers' direction if Cardinals QB Kyler Murray and WR Marquise Brown can't return from multi-week absences.

• Chargers injury outlook can only improve: As their offense would receive a significant boost if either TE Gerald Everett or WR Mike Williams return.

• Over intrigue: The real play could be on the total going over 47.5. If both teams receive some positive injury news, it will push the offenses even further ahead of the defenses in this matchup.

• QB2 battle? Early-week reports on Justin Fields are perplexing to say the least, with Matt Eberflus at one point saying Fields is “day-to-day,” before uttering in his next breath that it might be season-ending. Meantime, Jets HC Robert Sales for the first time this season failed to commit to embattled Zach Wilson, opening the door for Joe Flacco or even Mike White to take over the reins.

• It’s safe to assume the Jets defense could win this game itself if Fields is unavailable: Either QB option they choose would be better Zach Wilson, which is what the betting market is signaling after pushing this spread from -3.5 on the lookahead out to -4.5. Initial concerns about Fields' injured left shoulder caused the number to reach -5.5, but there seems to be enough likelihood that he plays to push this number close to where it opened Week 12.